The Minister of Economy and Finance details the new measures taken to save small traders, but also very small businesses. 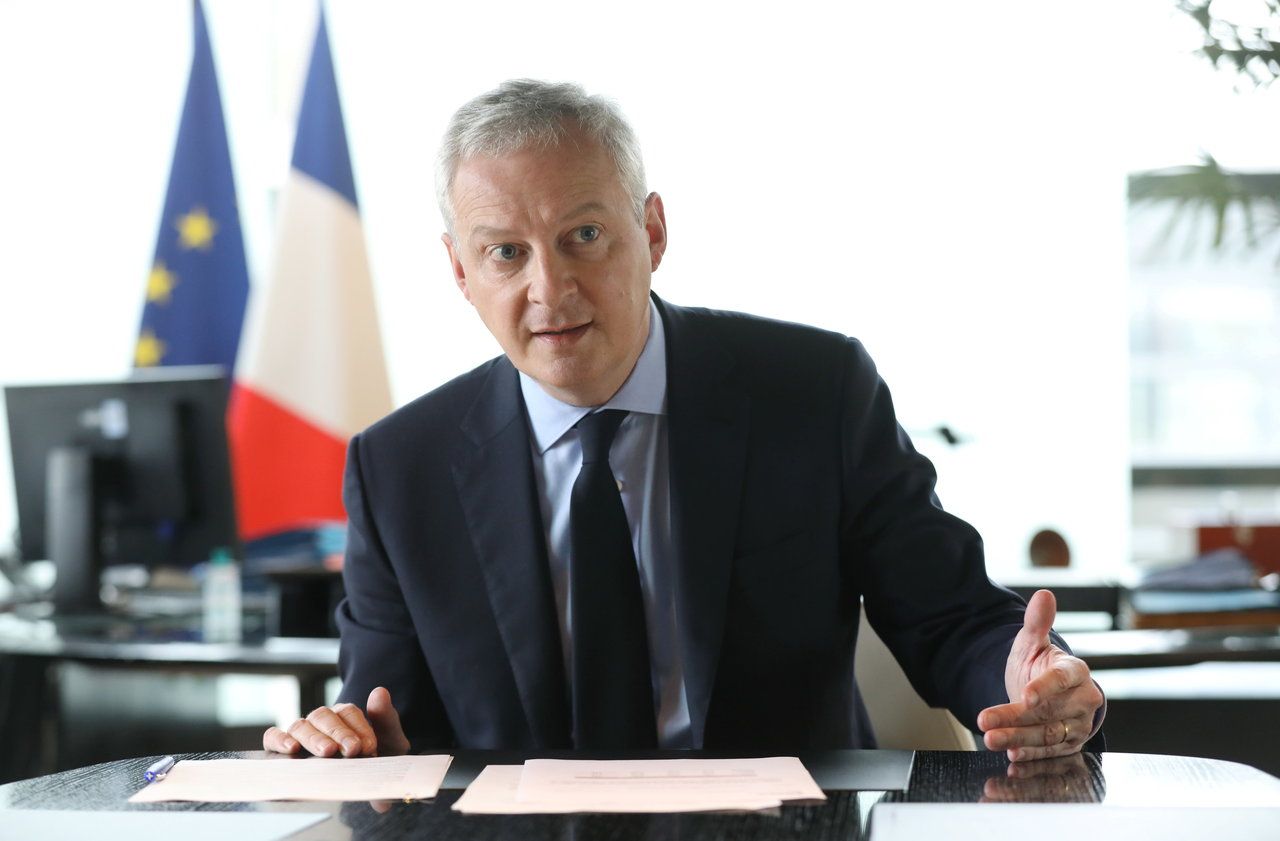 Aware that the new confinement endangers a number of shops and small businesses, the Minister of the Economy, Bruno Le Maire, unveils the new arsenal put in place to come to their aid.

Do you understand the anger of some of them?

Yes, I understand the anger of the traders.

I understand it all the more as the Christmas holidays are approaching and many have built up stocks.

It is a real blow.

But we won't let anyone down.

We are providing these closed businesses with massive economic support, even more powerful than during the first confinement.

Some are already announcing that they will not close.

Do you understand their choice?

I fight every day to bring concrete solutions to traders.

But I want to be very clear: the solution is not to break the rules on which everyone's health security depends.

The more we follow the rules, the more we can resume a normal life.

Are they not, despite everything, the big sacrifices, while brands like Leroy Merlin or Fnac Darty remain open?

Those who are hardest hit today are traders and artisans.

They cannot continue their activity when they thought they could relaunch it with the Christmas holidays.

On the specific subject of tool and material sales stores, whether large stores like Leroy Merlin, or small tool shops, we leave them open so that small and medium-sized businesses in the building industry have access to them and that the building sites do not stop suddenly.

The construction sector, like economic life more generally, must continue to function.

"I'm waiting for the gendarmes": this shopkeeper refuses to draw the curtain with the reconfinement

But what about Fnac, which immediately competes with bookstores?

On my intervention, and that of the Minister of Culture, Roselyne Bachelot, Fnac-Darty and supermarkets will close their books and culture department on Saturday morning.

Are you also going to ask supermarkets not to sell toys, since specialty stores are closed?

Each individual can phone or place an order on the Internet - if the store has one - to order the toy he wants.

He will then be authorized to move to pick up his order in the store or have it delivered.

In March, it was not possible because you were not allowed to go out for this reason.

With the new certificate, this is now possible.

I invite all French people to show patriotic behavior and to promote local commerce.

Things have to change, ”insists the tenant of Bercy.

Do you think that small traders will have time, in the context, to launch a website?

It needs to change.

We want to give traders the means to go digital.

100 million euros of the recovery plan will be released to support business leaders in their digitalization, via direct aid or a tax credit.

It must be as simple and as inexpensive as possible.

I therefore asked the general manager of La Poste to support all the municipalities in setting up digital platforms - called My Town, My Shopping - on which you can find all the shops in your town and buy in product line.

We therefore provide, on the page "Preferential merchant offer" of the economie.gouv.fr site, a list allowing each merchant to know which tool is best suited to their digital development.

Do you not recommend ordering on Amazon?

If you can find your toy in a local store, your book at an independent bookstore and all you need to do is make a phone call to order it, do it!

You support your local merchant and you participate in the revival of French activity.

And what will the State do for these VSE-SMEs?

Our support is even more massive than that of March.

In November, we will spend 15 billion euros in aid.

The solidarity fund will be increased up to € 10,000 monthly for all companies with less than 50 employees closed administratively.

Each merchant will be able to accumulate this sum with the help on rents and with exemptions from charges.

The State has always responded present and will continue to respond present.

Reconfinement: here are the new aid for companies

When will they get this aid?

They will be able to make their declaration on the impots.gouv.fr site at the beginning of December and will receive help in the days that follow.

Those who have been impacted by the curfew can declare themselves as early as November 20.

We will ensure that payments are prompt.

Finally, a special number of information on economic emergency measures will be available from Monday at 9 am: 0806 000 245.

VSEs and SMEs are much more vulnerable than in the spring.

Are you worried about business bankruptcies?

The choice of massive economic support should allow us to avoid the situation in the United States, with waves of hundreds of thousands of layoffs.

Yes, many companies are weakened and that is why we are considerably stepping up emergency aid.

This is working: we protected companies during the first lockdown, we maintained jobs and the economy was able to rebound very strongly.

In the third quarter, the French economy recovered dramatically, with + 18.2% growth.

What are the most vulnerable sectors?

Some sectors have been cut short by the Covid.

I am thinking of small businesses, restaurants, hotels, bars, events, sport, cinema, theater… Then there is aeronautics which has lost between 35 and 45% of its activity.

And which has no prospects for the moment… Finally, metallurgy is also very affected because it is very dependent on aeronautics and the automobile.

We will therefore support all these sectors.

What will be the impact of these new expenditures on the debt?

These additional expenses are investments that will allow us to bounce back very quickly and accelerate the transformation of the French economy to make it more competitive.

But, it is true, these 15 billion euros additional for the month of November will increase the level of the French debt.

Will these 15 billion be entered in the next Amending Budget?

In the fourth amending finance bill, examined in the Council of Ministers on Wednesday, we will propose to enter 20 billion euros in additional credits.

Because it is essential to have a precautionary reserve of an additional 5 billion euros to deal with possible new expenses.

The virus has taken us by surprise enough, we have to be anticipatory.

I would like to remind you that we have no difficulty in financing ourselves on the markets.

Are you going to review the Budget envelope for next year?

Wisdom recommends also reviewing the amounts of the finance bill for 2021. We are examining the various options, nothing can be ruled out.

But I'm sure 2021 will be the year for the French economy to rebound.

"We spent more than 22 billion euros with partial unemployment", argues the minister.

A million French have fallen into poverty.

Shouldn't we also revive consumption for the French economy to recover?

We are already massively supporting the demand!

We spent more than 22 billion euros with partial unemployment.

The Prime Minister also announced support measures, such as the payment on November 27 of solidarity aid to 4 million households, also aid of 150 euros for young people under 25 who receive APL or a scholarship. .

In 2020, a family at RSA with three children will have benefited from 1,200 euros of additional aid.

Without forgetting for two years the reduction in taxes, the abolition of the housing tax, the increase in the activity premium… This year, the French GDP will fall by 11%, but the purchasing power of the French of 0.5% only.

But you are right, behind these figures, there are realities.

Millions of French people found themselves in immense difficulty.

We have done a lot, but if more needs to be done for populations made vulnerable by the crisis, we will do it.

We are working on avenues that would allow them to be supported when the time comes, if the situation deteriorates.

Why the government refuses to create a young RSA?

The liberal think tank Institut Sapiens calculated that it would cost "only" 320 million euros per month if it was paid to 18-25s without jobs, training or resources.

Our policy is to encourage everyone to find a job or training.

This must be the priority for our young people.

I prefer to put public money on the apprenticeship bonus, which will allow us to have the same number of apprentices in 2020 as in 2019, rather than spending it on a permanent allowance for those under 25. .

Will there be a gesture for charities that help the most vulnerable?

They are vital, no one can replace their work in the field.

We strongly support them.

I would remind you that the recovery plan provides for 100 million euros dedicated to supporting associations fighting against poverty.

If it is necessary to provide them with additional financial support in these times of great difficulty, with Olivia Grégoire, we are in favor.

And I invite the French, always very generous, to participate again in fundraising.

I recall that 87 billion euros have been saved since the containment in March. 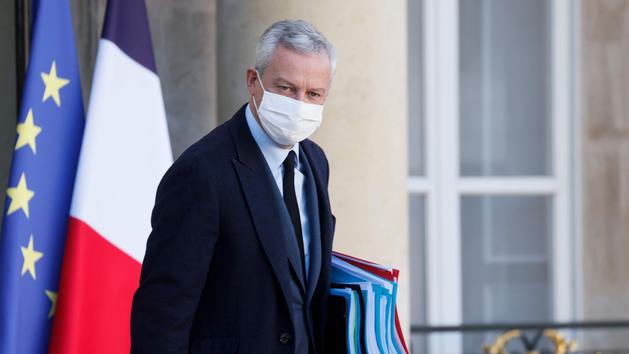 Reconfinement: in Bercy, Bruno Le Maire is at the helm 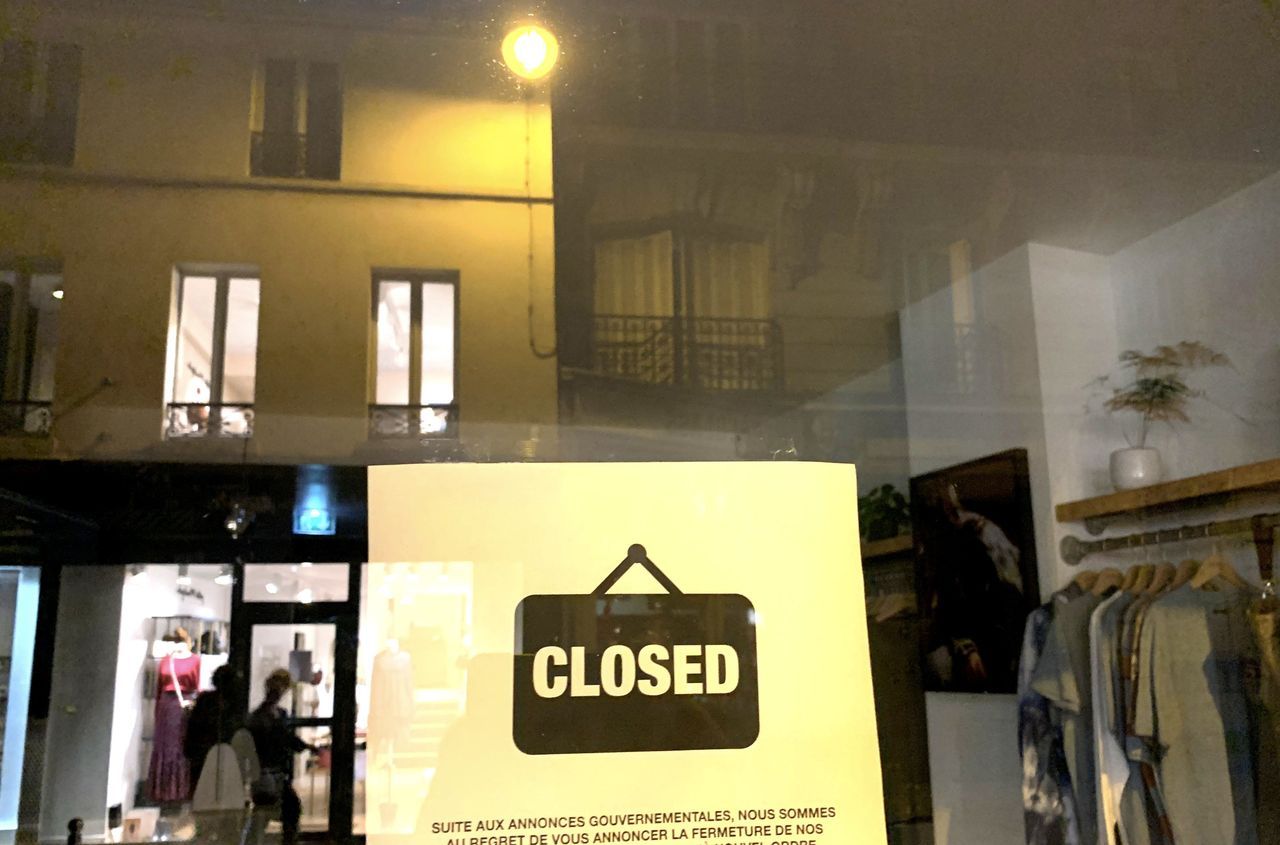 Reconfinement: the mayors are taking action to support local businesses 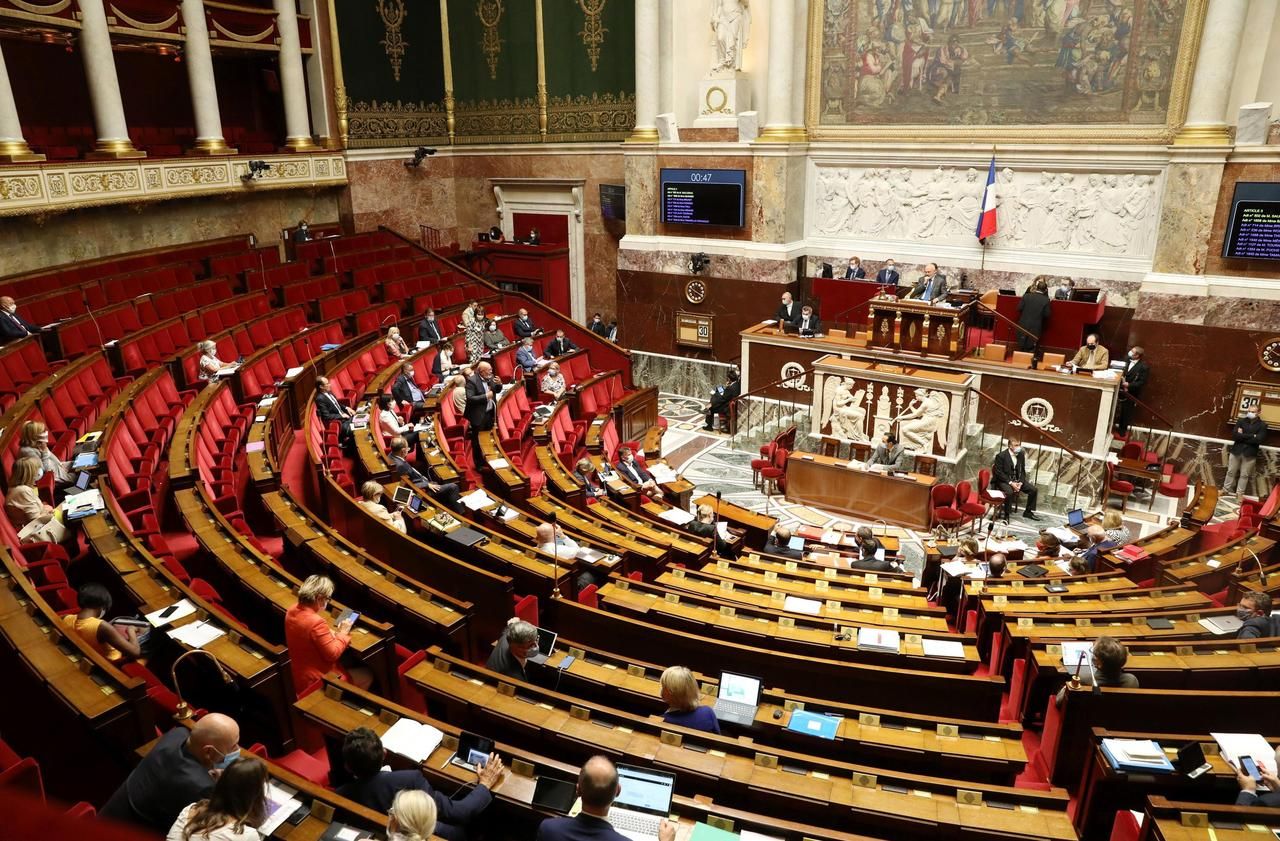 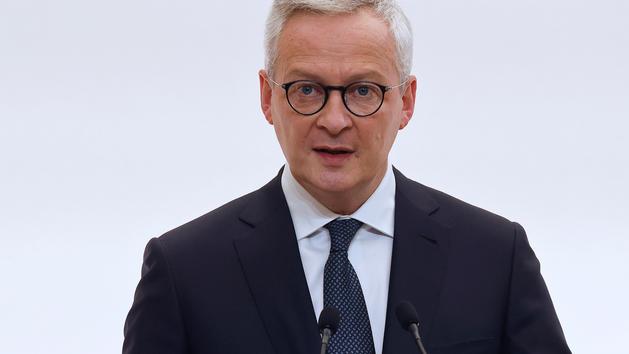 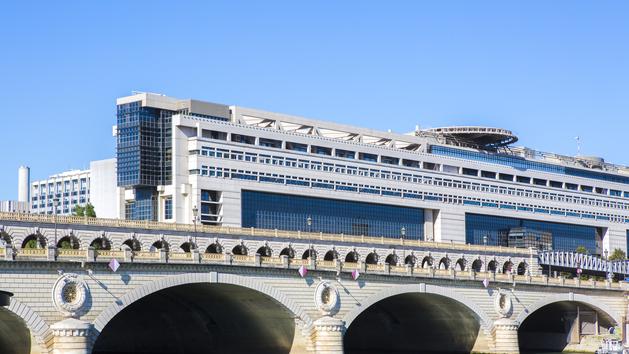 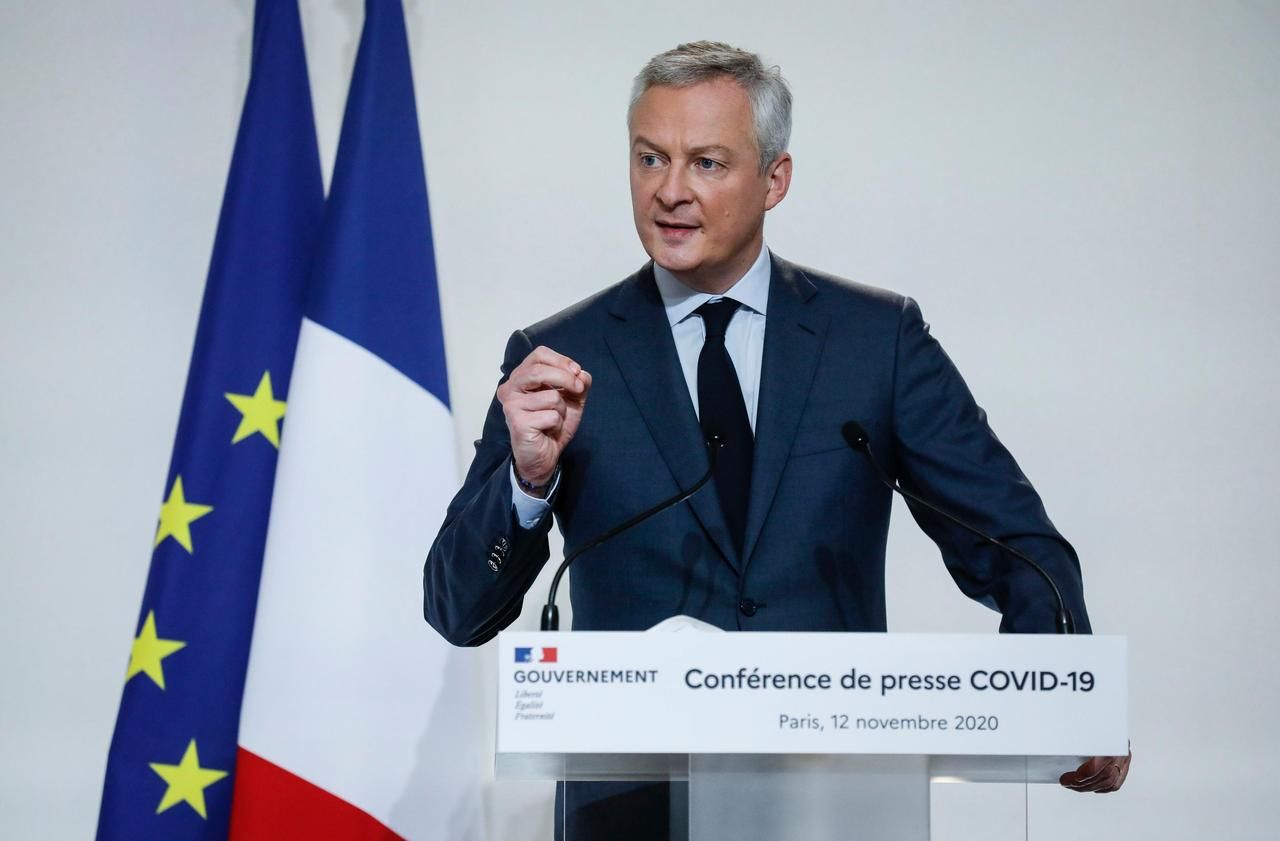 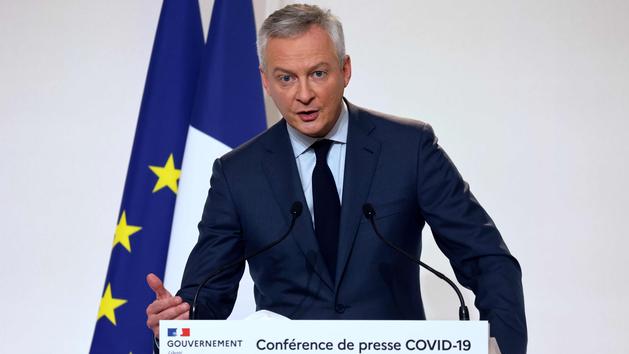 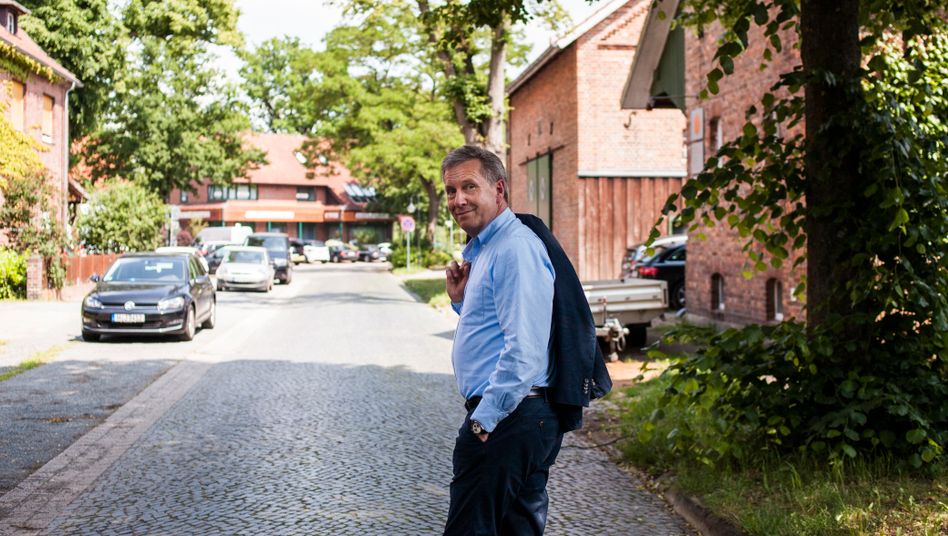 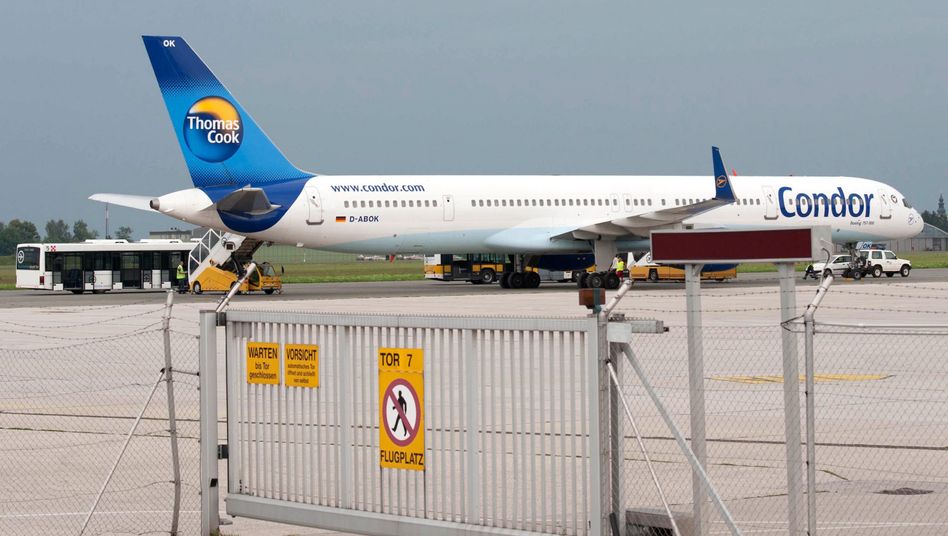 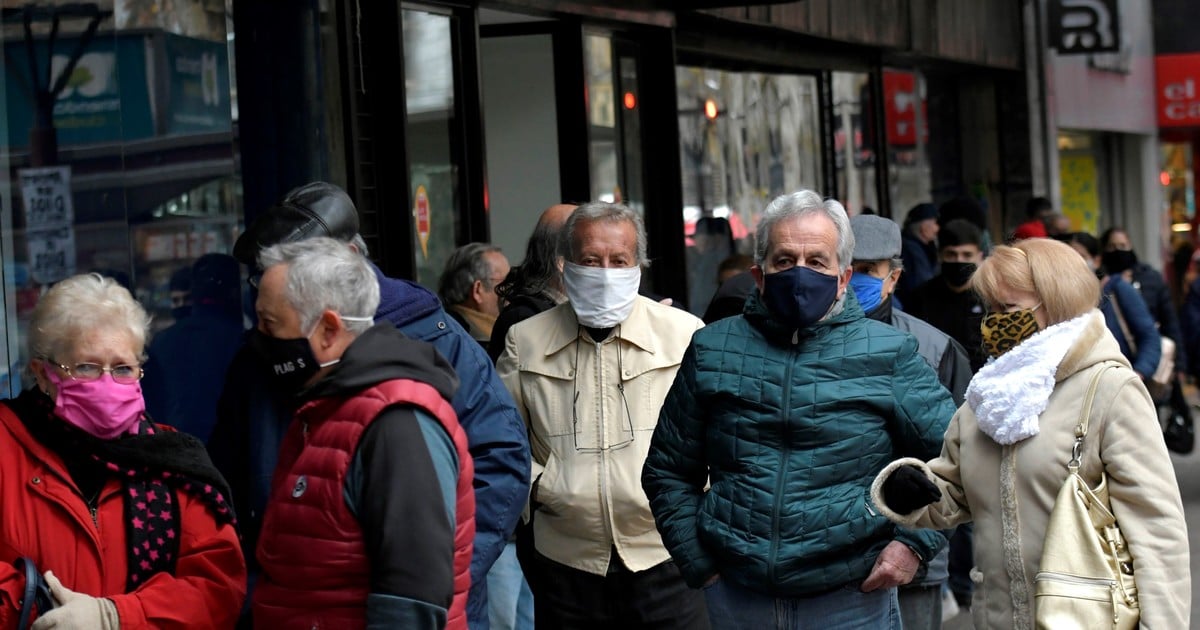 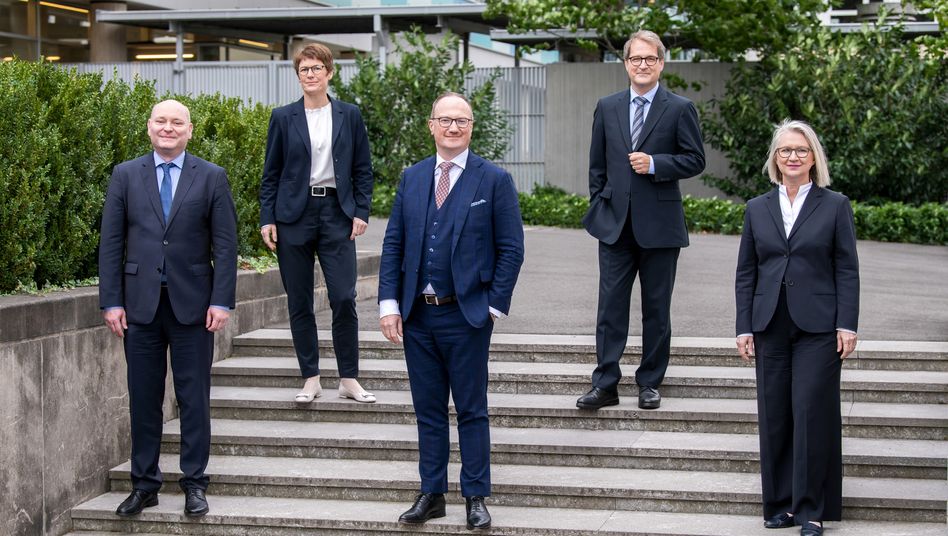 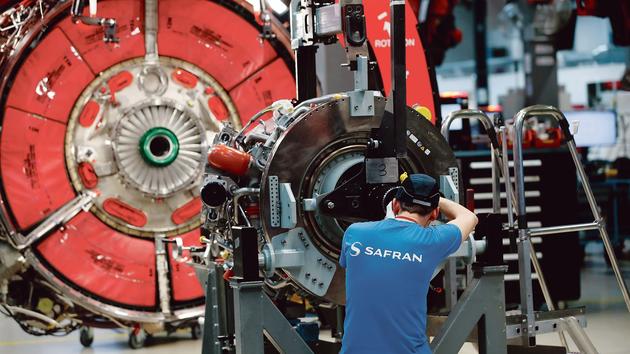 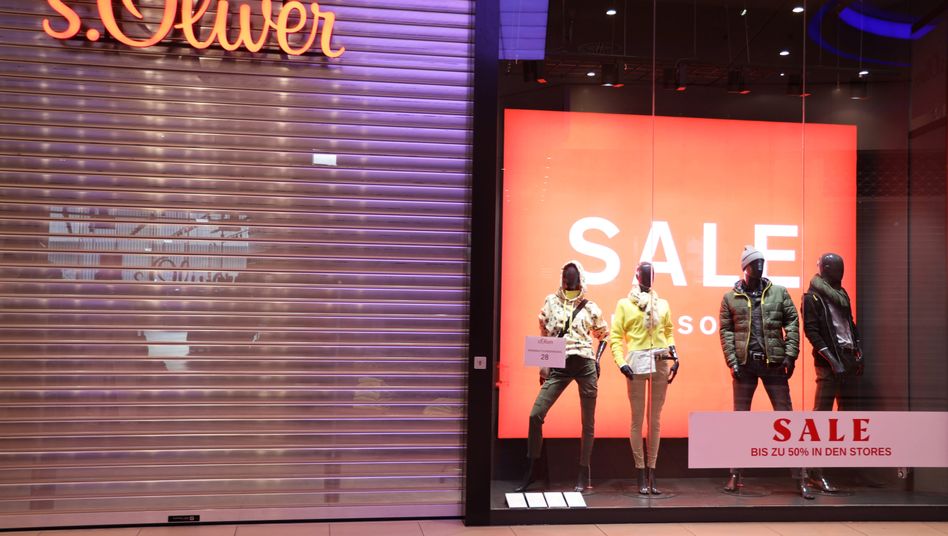 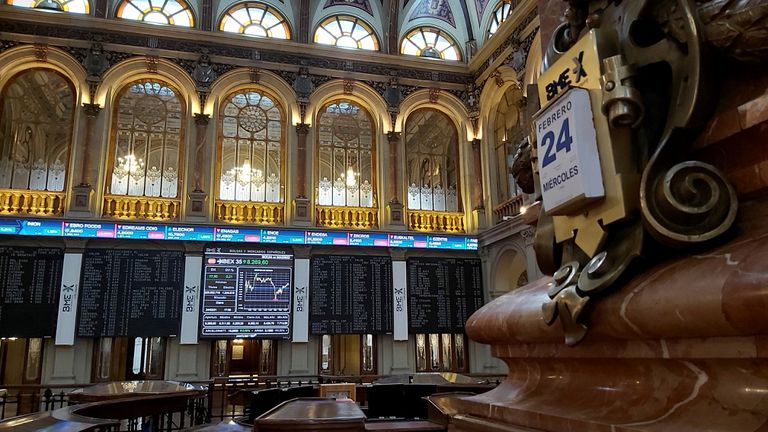 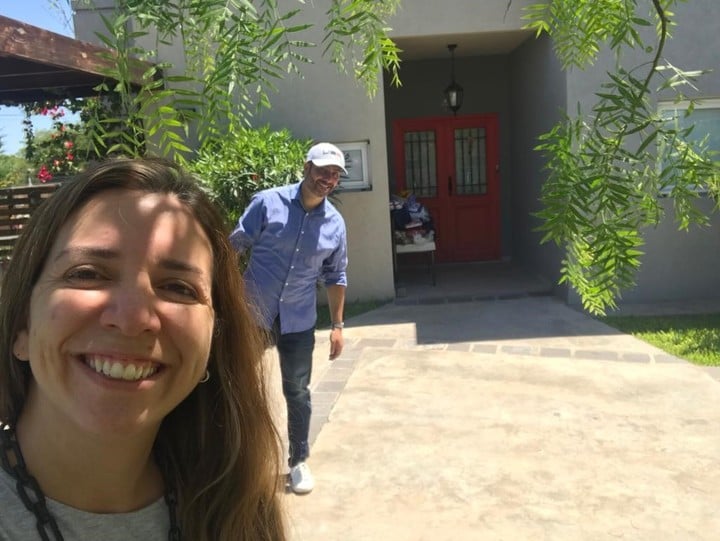 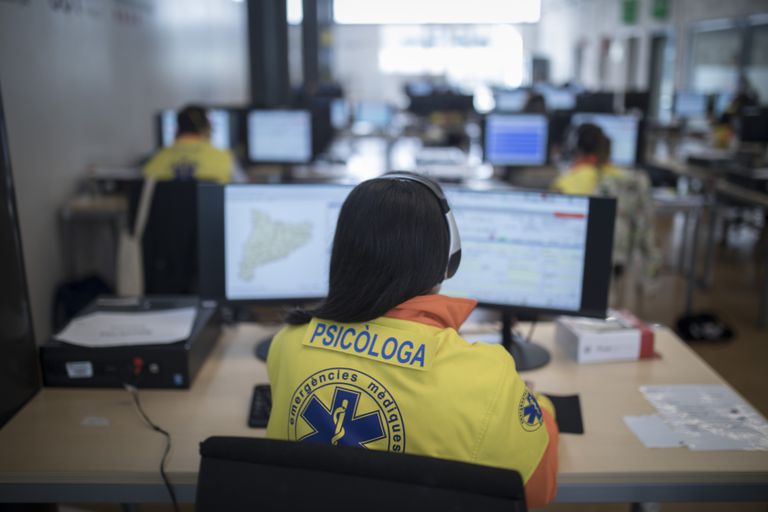 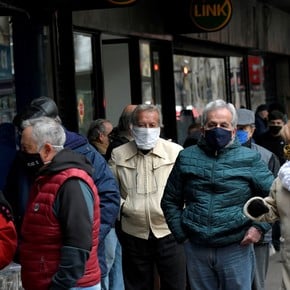 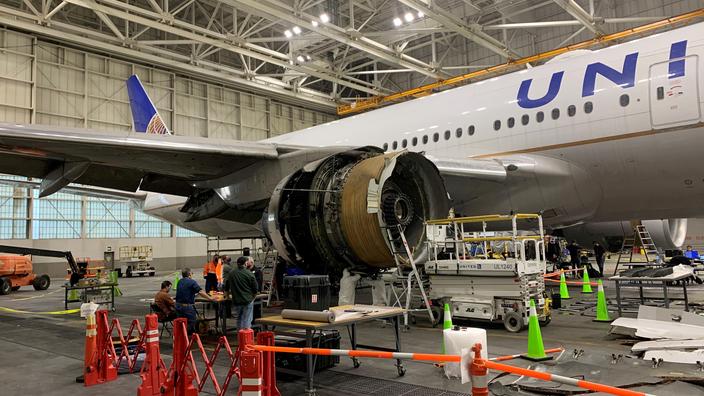 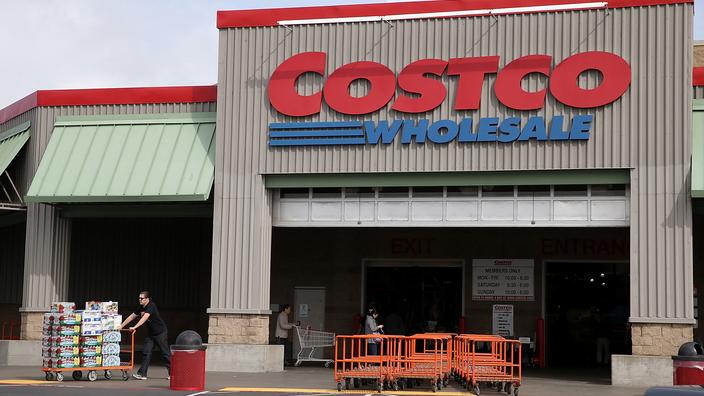 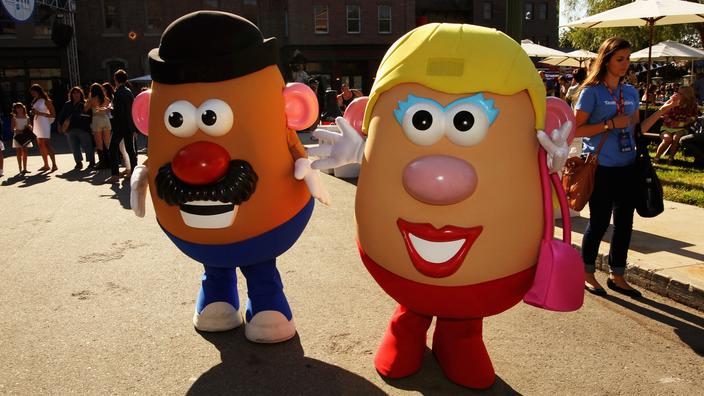