INFO LE FIGARO - Consultations are underway with local residents' associations and representatives of cafes and restaurants to maintain and improve the system which should normally end in June. 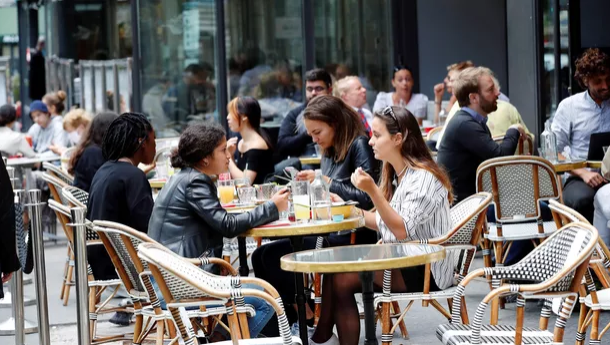 Some cultural places and some terraces will reopen in mid-May

" promised government spokesman Gabriel Attal last week, thus kicking off preparations for the reopening for professionals in the hotels and cafes sector. and restaurants (HCR), but also for the City of Paris.

This indeed intends to extend for the coming months the “

”, these displays of terraces on parking spaces in particular, to allow respect for social distancing.

This device had already been put in place last year at the time of deconfinement, to maintain the activity of restaurateurs in the capital.

To read also: This is Paris!

This week, consultations are being organized with union representatives from the Parisian HCR sector and with local residents' associations to organize this return to ephemeral terraces. The City of Paris had already announced last August the extension of the device until June 2021, but now intends to go further: “

the City of Paris today wishes to review for the month of July its rules for displays and terraces for in particular, perpetuate this system of temporary terraces

”, thus indicates the community in a document sent to the participants in the consultations, which

", and must take into account the criticisms of some residents of the device.

The ephemeral terraces have indeed been able to cause “

” and non-compliance with standards criticized by Gilles Pourbaix, President of the Réseau Vivre Paris !.

Some terraces have not been removed since last fall,” he

We have received hundreds of reports of degraded terraces, the worst being the wooden one which,

in the 11th arrondissement, burned down,

dragging six vehicles and storefronts with it

Respond to the fears of local residents

Issues that should be raised during the

conducted this week. Several themes will be on the program proposed by the City: "

how to better manage the aesthetics of the facilities and the preservation of local heritage?"

H ow to promote the greening of facilities and the use of bio-based materials?

authorize permanent terraces on parking spaces? In what conditions ?

This last question echoes the statements of Anne Hidalgo's deputy at the mayor of Paris, David Belliard, in charge of the transformation of public space.

In March, the elected EELV announced that the elimination of Parisian parking spaces (up to 60 hectares of public space) would allow space to be reallocated to “

” and in particular to terraces.

This week, the City is also proposing discussions concerning the sanctions for the owners who do not respect the Charter of terraces thus completed.

The discussions around these questions will end on Thursday, before a restitution of the exchanges on April 7.

On the restaurant side, Pascal Mousset, president of the GNI (National Group of Independent Hotels and Restaurants) is not closed to these discussions, aimed at limiting abuses.

On the other hand, he will plead for the municipality to make a gift of the terrace fee that establishments must in principle pay for their occupation of the space.

In Paris, we anticipate a deterioration of -40% for catering and -60% for the hotel industry.

We are going to relive the summer of 2020: unfortunately there will be no business,

Gilles Pourbaix, president of the Vivre Paris! Network, regrets for his part the hasty and vituperious exchanges: “

The municipality wants to make Paris into a giant terrace. But we must take into account the fact that we are coming out of a period of virtual silence in Paris, due to the curfew

The tolerance threshold of Parisians in the face of noise pollution has been lowered, and I think that the inhabitants would not stand if the relocation of the terraces goes badly.