Interactive map: Where a lot is earned in Germany 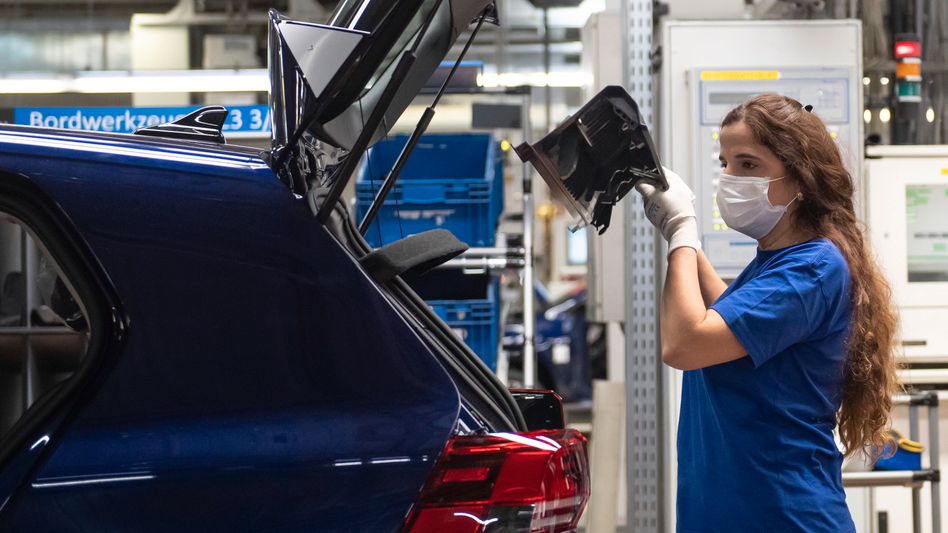 Volkswagen employee in spring 2020: The auto industry continues to pay some of the highest wages

In the corona crisis, the concept of short-time work has proven itself to an unprecedented extent. How effective it was is shown by current statistics from the Federal Employment Agency (BA): Although an average of 2.85 million people were on short-time work in 2020 and thus mostly had to forego part of their regular wages, the wages of the employees have still increased slightly. According to this, the mean gross monthly wage of full-time employees in Germany last year was exactly 3427 euros and thus 26 euros more than in the pre-crisis year 2019.

However, the wage development in individual sectors was quite different: In industry, which was particularly affected by the pandemic in spring, the median wages fell by 44 euros.

In the hospitality industry, which was almost consistently severely affected, it was as much as 79 euros.

In contrast, the median wages rose sharply in the health and social services (plus 80 euros), among those employed in education and training (plus 79 euros) and in the insurance industry (plus 111 euros).

AreaWhat is the median wage? Expand

The median wage - or mean wage - is often confused with the average wage, but it is something different: Receiving the median wage means that half of the employees earn more, the other half less than you Wages added up and divided by the number of employees.

The median wage in this case is 3000 euros - because half of the other employees (colleague A) earn less, the other half (colleague C) more.

The median wage is therefore much better suited to the representation of wages in the middle of society because - unlike the average wage - it is not distorted upwards by a few very high wages.

The regional differences in wage levels remain huge in the corona crisis.

As before, people earn significantly less in eastern Germany than in the western federal states.

You can see how your own circle cuts off from the following map of Germany:

Accordingly, full-time employees earn the lowest median wage in the Erzgebirge district; the median wage there is only 2407 euros. It is hardly any more in Görlitz (2422 euros), the Saale-Orla district (2448 euros) and Altenburger Land (2466 euros). In any case, the 55 districts with the lowest median wages are all in the now not so new federal states. West bottom light is the south-west Palatinate, where full-time employees earn an average of 2773 euros gross per month.

In the west, on the other hand, there are cities in which you still belong to the lower half even if you earn twice the median wage in Görlitz, and none of them are metropolises: in Wolfsburg, where the Volkswagen group is headquartered, you have to do more earn than 5067 euros a month to count towards the top half. In Ingolstadt, the main location of the VW subsidiary Audi, the wage average is 4982 euros per month. In Erlangen, where Siemens and companies in the medical sector are strong employers, the median salary is 5002 euros.

The effect of short-time working on wages is quite small overall. "If you look at the districts with the greatest changes compared to the pre-crisis year 2019, there is no direct connection to the short-time work rate," says Helge Emmler from the Economics and Social Science Institute (WSI) of the union-affiliated Hans Böckler Foundation. In Dingolfing-Landau, for example, where BMW operates a large plant, the median wage fell by as much as 175 euros with a short-time work rate of just 3.9 percent. In Jena, meanwhile, the average wage rose by an impressive 96 euros with a higher rate of 5.9 percent.

Other factors played a significantly larger role in the pandemic.

In many cases, special payments such as profit sharing, Christmas bonuses or other gratuities are likely to have been significantly capped.

On the other hand, corona allowances, among other things, had a positive effect on wage developments.

Big differences between the sexes

There is still a large difference in wages not only between East and West, but also between men and women.

If you look at men alone, their median wages in Erlangen are the highest at 5684 euros.

Women earn the most in Wolfsburg, an average of 4,422 euros.

The gap between men and women is greatest in Ingolstadt, Erlangen and Böblingen.

The following table also shows the median wages for women and men separately in each district.

They become visible on mobile phones when you hold your device sideways.

You can then also search for your circle:

It is important that all of the above-mentioned BA figures for the individual districts in Germany refer to the median wages at the respective place of work. The employees do not necessarily live in this place. It is known, for example, that the wage level of the resident population in Ludwigshafen is significantly lower than it appears according to statistics; Many high-earning BASF employees prefer to live in the beautiful countryside rather than in the industrial city. Conversely, the wage level of the resident population in Görlitz is higher than the statistics suggest, because this also includes the high proportion of commuters from Poland. Local elections Hessen: Interactive voting map with all results from municipalities and districts Local elections Hessen: Interactive voting map with all results from municipalities and districts

Local elections Hessen: Interactive voting map with all results from all municipalities and districts Otterfinger hits the bull's eye with VR mountain guides: App among the best in a ministry competition

Corona map for Bavaria shows the current hotspots: All figures from districts and cities