The president of the network agency makes a dramatic appeal to the Germans. A state secretary is asking companies to buy emergency power generators. And Henkel is urging employees to work from home – to save energy. 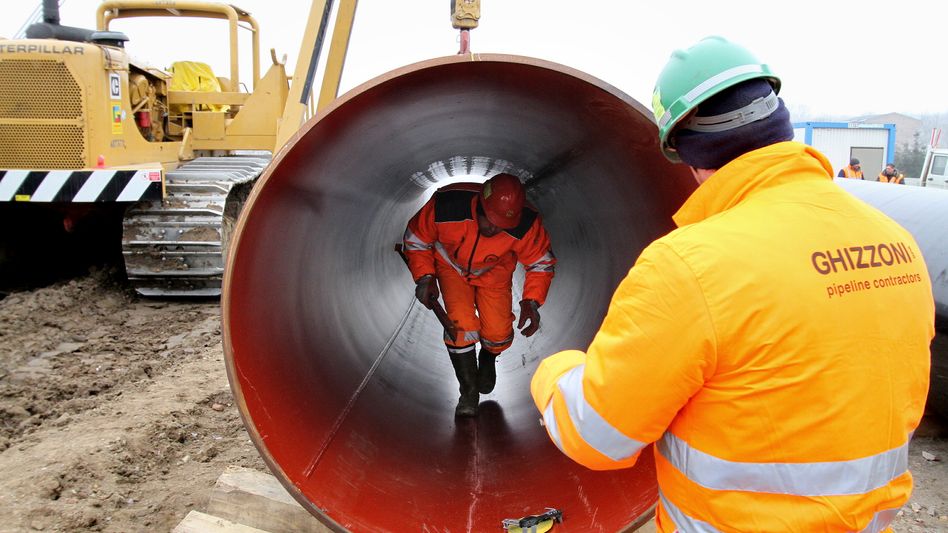 Pipeline construction in Mecklenburg-Western Pomerania (2010): »We do everything to prevent private households from being left without gas«

The President of the Federal Network Agency, Klaus Müller, fears a total failure of Russian gas supplies - and appeals to the population to save energy.

The question is whether the upcoming regular maintenance of the Nord Stream 1 gas pipeline "will become a longer-lasting political maintenance," Müller told the newspapers of the Funke media group.

If the gas flow from Russia "is motivated to be lowered for a longer period of time, we have to talk more seriously about savings".

The twelve weeks before the start of the heating season must be used to make preparations, he said.

Economics Minister Robert Habeck made it clear on Thursday that he feared a complete lack of Russian gas supplies from Nord Stream.

From July 11, there is a threat of "a total blockade of Nord Stream 1," said the Green politician.

That's why it can be very problematic in winter.

The gas supply over the summer is guaranteed.

Then no gas flows through Nord Stream 1. The big concern is that Russia will not turn on the gas tap again after the maintenance.

According to Müller, in the event of a gas supply stop, private households as well as hospitals or nursing homes would be given special protection.

"I can promise that we're doing everything we can to avoid homes being left without gas," he said.

»We have learned from the corona crisis that we should not make any promises if we are not absolutely sure that we can keep them.«

However, the network agency sees “no scenario in which no more gas comes to Germany”.

If industrial companies have to be separated from the gas supply, "we orient ourselves to the business damage, the economic damage, the social consequences and also the technical requirements of the gas network operation," said Müller.

Meanwhile, the Norwegian government expects to be able to supply more gas by 2024 at the latest.

"Companies are now examining projects to be able to increase their gas supplies from 2024 and 2025," says Terje Aasland, Norway's oil and energy minister, of the "Wirtschaftswoche".

»The crisis in the energy sector will have long-term effects.

We need to focus on investing in new gas production capacity.” Never before have Norwegian companies exported as much natural gas from the Norwegian continental shelf as they do now.

»We support our European friends in being able to act independently of Russian oil and gas as quickly as possible.«

Meanwhile, the federal government is recommending companies to purchase emergency power generators as a preventive measure against an escalation of the gas shortage.

The generators are intended to compensate for possible power outages, reports the "Bild" with reference to a response from State Secretary for Economic Affairs Patrick Graichen (Greens) to Stephan Pilsinger, member of the CSU Bundestag.

"Equipping with emergency power generators is particularly recommended for operators of critical infrastructure," the newspaper quoted from a letter from Graichen.

The reason is that there is no shutdown sequence in the event of a crisis.

»In the event of a shortage of gas or electricity, the Federal Network Agency assumes the function of the federal load distributor.

You are then responsible for the distribution of gas or electricity in close coordination with the network operators,” writes Graichen.

He recommends that the emergency generators should have a bridging time of 72 hours, reports "Bild".

On the company side, there are also concrete considerations for saving energy.

"We could then lower the temperature in the offices significantly, while our employees could heat at home to the normal extent," said Henkel boss Carsten Knobel of the "Rheinische Post".

In addition, the group can use more coal and oil in its company-owned power plant in Düsseldorf, which is currently mainly operated with gas.

"Compared to today's operation, we could save almost a third of the gas," said the manager.

But the company is still waiting for approval from the Federal Network Agency.

With regard to the challenges of the energy crisis in the coming winter, Knobel said: »I am optimistic that we can do it«.

But it is important to save as much gas as possible by winter so that the storage tanks are sufficiently filled.

He assumes that the federal government will have to absorb the rising prices with further relief measures for the citizens.

»Especially in autumn and winter, heating costs are likely to rise sharply.

And then we will also talk about relief,” says Nouripour to the editorial network Germany.