Budapest, SANA- Hungarian Foreign Minister Petr Sciarto has stressed that it is impossible for his country to find a substitute for human resources. Hungarian Foreign Minister Peter Sciarto stressed that it is impossible for his country to find an alternative to Russian energy sources.

Russia Today quoted Siarto as saying in an interview with CNN: “The reason we asked for an exception to the oil embargo is the fact that if we did not ask for it, it would be financially impossible to provide the country with sufficient fuel,” noting that the authorities in his country are facing the question of whether it is possible Replacing Russian gas and oil at the present time In fact, at present our answer is “no” because it is virtually impossible.

Earlier, head of the Hungarian Prime Minister's Office, Gerge Goyash, said: "The European Union's economy will be in trouble if it imposes a ban on Russian gas, so one can trust common sense in this matter, at least temporarily.

Hungarian government spokeswoman Alexandra Zintekerai had indicated earlier that the ban on Russian gas would mean a "shot in the lungs" for Europe, as it is impossible to compensate for Russian supplies, stressing that Hungary will announce its position sharply if the proposed sanctions conflict with Hungarian interests. 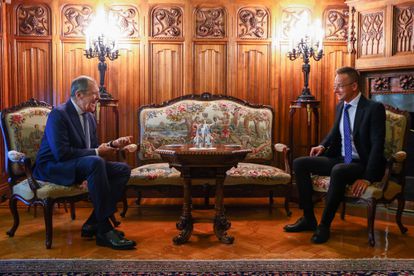 Hungary: No guarantees for our energy security