The lockdown locks are not only sprouting on you - an Australian sheep even managed 35 kilos of wool. In addition: Mount Etna spits lava and a passenger films an exploding engine. 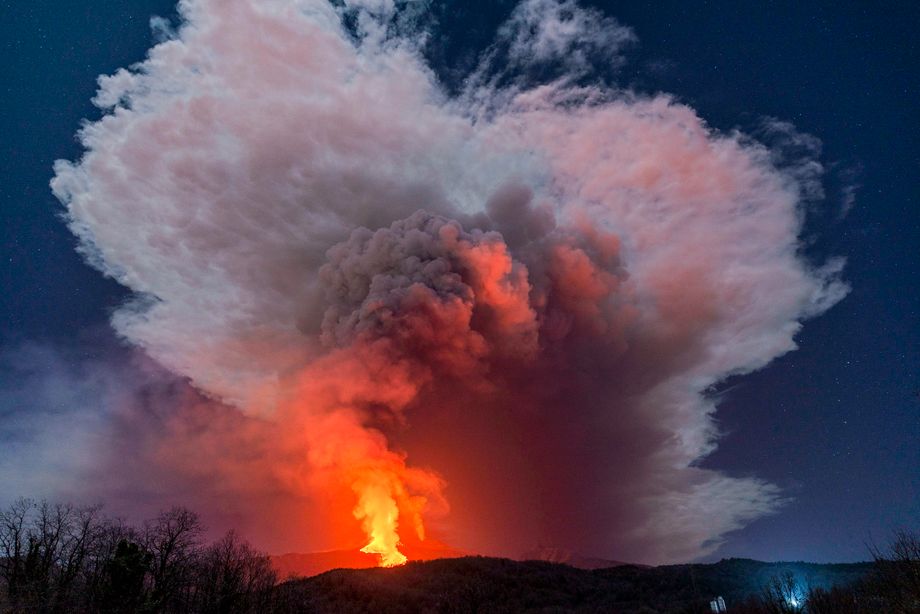 Another eruption of Mount Etna in Sicily: After the eruption in the previous week, a huge cloud of smoke and ash rises again into the evening sky on Wednesday night.

Lava fountains several hundred meters above the southeast crater could be observed.

A kissing couple in front of a burning barricade: The arrest of the musician Pablo Hasél caused protests, some of which were violent, in his hometown of Barcelona.

Hasél had been convicted of insulting the royal family and glorifying violence after he had described the former King Juan Carlos I in his texts as "parasites", "murderers" and "mafioso", among other things.

The Mars rover "Perseverance" during the landing maneuver shortly before touchdown on the red planet: The NASA robot took off from the Cape Canaveral spaceport at the end of July 2020 and is supposed to search for traces of earlier microbial life on Mars.

The focus of the mission is the exploration of the Jezero crater north of the equator, a dry lake with a diameter of almost 50 kilometers.

A view out of the aircraft window that nobody would want: shortly after a Boeing 777 took off from Denver Airport towards Hawaii at a height of almost 4,000 meters, an engine exploded, large parts of the fairing fell off and landed in a residential area in the suburb of Broomfield - fortunately without anyone to hurt.

The machine was able to turn around and successfully make an emergency landing.

The focus of the investigations is now on the engine type PW4000 from the manufacturer Pratt & Whitney, which was previously identified as a problem.

A man near the Kenyan city of Nanyuki is standing on a hill in the midst of a swarm of locusts: The worst locust plague in decades in East Africa and South Asia continues.

Now the Kenyan start-up »The Bug Picture« wants to make a virtue out of necessity and has the insects caught by villagers using nets in order to process them into animal feed.

Fishing boats on Lake Dojran: The lake is located on the border between North Macedonia and Greece, is about 10 meters deep and with 43 square kilometers the third largest lake in the Republic of Macedonia.

Lake Qiandao in eastern China is significantly larger: the artificial reservoir has existed since 1959 and is 570 square kilometers in size.

It is also called the "Lake of a Thousand Islands".

Its coastline is almost everywhere as picturesquely rugged, as in this photo, where tea plantations can be seen.

A veterinarian takes samples from the carcass of a dead fin whale on a beach south of Tel Aviv.

The animal's death is believed to be linked to an oil spill on the Mediterranean coast off Israel, in which tons of tar were washed onto the beaches of a 160-kilometer stretch of coast between Rosh Hanikra and Ashkelon.

The Israeli environmental protection ministry assumes that oil that could have leaked from a ship is a possible cause of the environmental disaster.

As a result, the government banned all Mediterranean beaches in the country after several people involved in cleaning operations complained of health problems.

Jockey Fallou Diop, 19, on the back of a young horse: in Niaga, a small village in Senegal, he is training for his goal of being able to ride in races in France next year.

The young man was able to win the most important race in his country at the age of 17 and is regarded as a very promising young talent.

A young woman at a demonstration critical of the government in Thailand's capital Bangkok: The code 112 refers to the paragraph of the law, which can be used to punish lese majesty.

The so-called "Lèse-majesté" was not used in Thailand for around two years, but in the course of the protests that had been going on for months, several activists were charged with it.

The political situation in the country remains tense. Most recently, Prime Minister Prayuth Chan-ocha and nine of his ministers had to face a vote of no confidence, but survived it.

Lila Blanks mourns at the coffin of her husband Gregory in San Felipe, Texas, and finds consolation from the few friends who are admitted to the ceremony because of the corona restrictions: The 50-year-old Blanks was suffering from complications in connection with a Covid-19- Disease died.

In the USA, the number of registered corona deaths recently exceeded the sad mark of half a million.

A man from Mexico looks at the Rio Grande at the Matamoros border crossing while he waits to show his papers and enter the United States: The new US government under Joe Biden has the last 25,000 asylum seekers, so far in neighboring Mexico, for a decision of their applications had to wait, gradually allowing entry and temporary residence until their procedures were completed.

Ex-President Trump introduced the rule two years ago under the motto “Remain in Mexico”.

Ilmira Bagautdinova, a dancer with the Mariinsky Ballet, is dancing in a frozen bay of the Gulf of Finland near St. Petersburg to protest against the construction of a grain terminal and for the preservation of the beach in its natural state.

Does the sight look familiar to you?

No, this is not your reflection after several months without a visit to the hairdresser.

This feral domestic sheep, called Baarack, lived in the woods north of Melbourne, Australia for years before being spotted by people calling a rescue organization for rescued animals.

Their employees finally freed the emaciated animal, which was almost blind because of the wild growth, from its burden, 35 kilos of wool were collected after the shearing.

A cat sits in a recess in China's Great Wall.

On the well-known Mutianyu section of the wall, about 70 kilometers north of Beijing, tourism has declined by 60 percent since the beginning of the corona pandemic.

Gender segregation, men on the left, women on the right: more than 100,000 farmers and employed agricultural workers demonstrate in Barnala, India, against the Modi government's new agricultural laws.

The protests have been dragging on for three months, but so far they have mainly been confined to the New Delhi area.

After a union call, farmers in Punjab state showed solidarity with the protests.

An artist from the "Royal Circus" near Senas, in the south of France, kisses her parrot: While circuses in France are still not allowed to open due to the corona pandemic, a legislative initiative is being debated that will ban wild animals in circuses.

Men keep watch at a self-built gate in Cuba's capital Havana: In order to protect their neighborhood from the corona virus, they only allow residents of the neighborhood to enter or pass.

On National Youth Day, a boy runs through a street in Harare in front of a portrait of the former ruler of Zimbabwe, Robert Mugabe, who had declared the day a public holiday: schools are also closed in crisis-ridden Zimbabwe and the government has temporarily imposed curfews on the Curb the spread of the South African coronavirus variant.

Since the pandemic began, several members of the country's government have fallen seriously ill and died from Covid-19.

Two companions escort an elderly lady to a vaccination center in Buenos Aires, where she is to receive a dose of the AstraZeneca vaccine.

A man stands in silent memory at the grave of Ahmaud Arbery: The 25-year-old African American was shot a year ago while jogging in Brunswick, Georgia.

They are accused of having racially suspected Arbery of being responsible for theft in the neighborhood, of stopping him in the car and then killing him in a scuffle.

The case had caused quite a stir, also because the law enforcement authorities remained inactive for far too long and only started investigations after a cell phone video of the crime had surfaced.

Now the mother of the victim has sued for compensation and accuses the authorities of covering up. 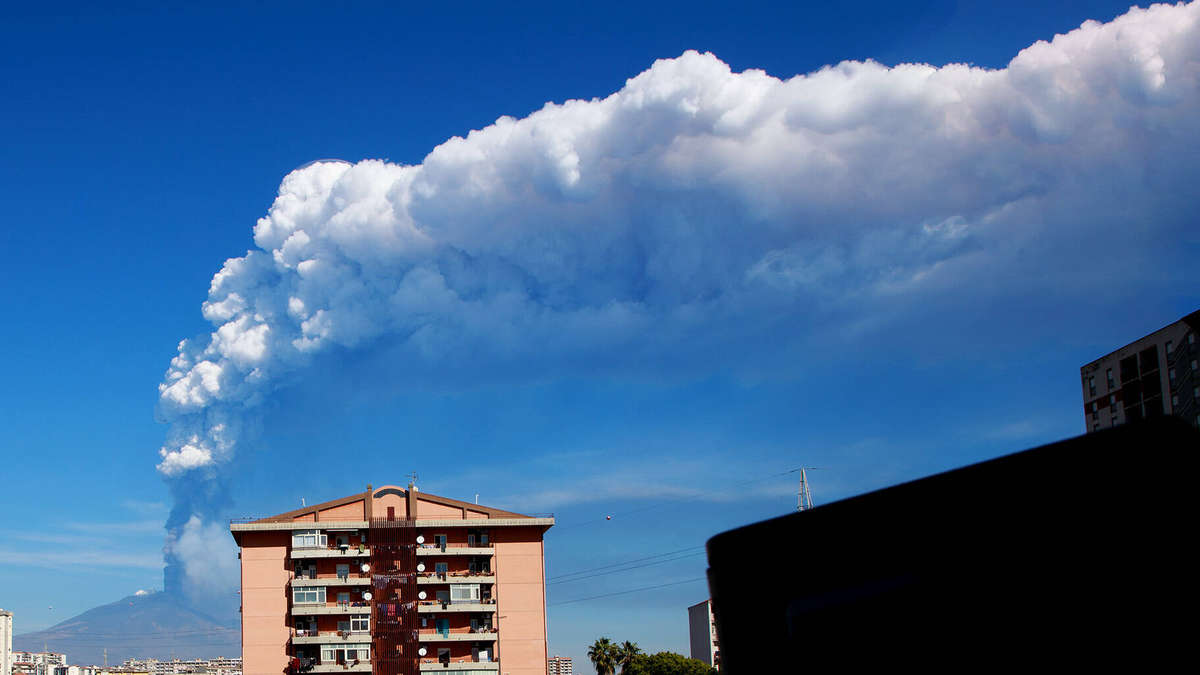 Etna: volcano shows off at night, lava and lava fountains 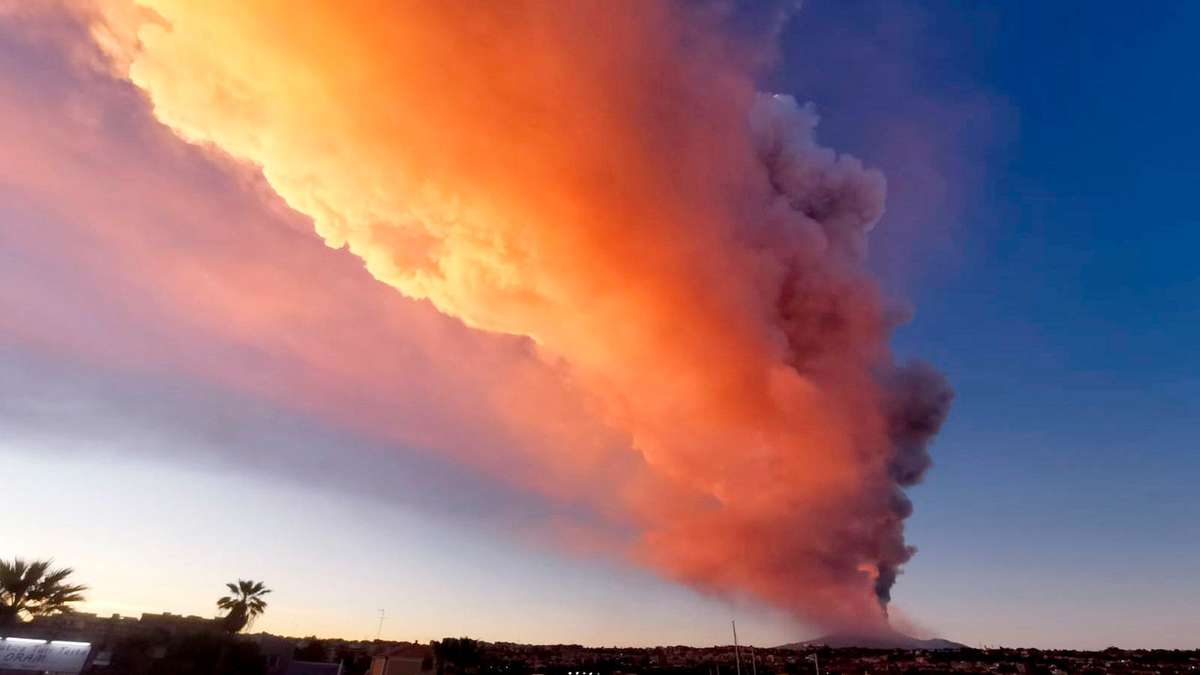 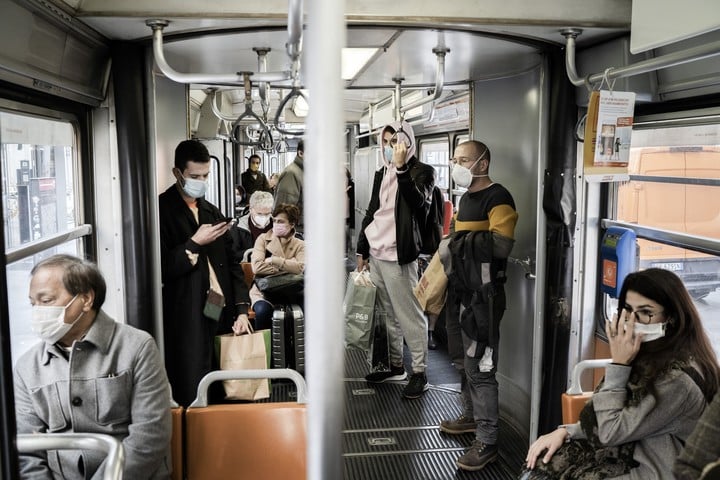