Enough violence: Hamashbir to the consumer in a campaign against violence against women led by Doreen Atias - Walla! Fashion

In honor of International Women's Day, starting on March 8, the "Hamashbir Latzarchan" network is launching a social campaign kicking off the fight against domestic violence - how did we allow simple objects such as a belt or a rolling pin to become dangerous? Watch Doreen Atias' poignant monologue

Enough violence: Hamashbir to the consumer in a campaign against violence against women led by Doreen Atias

In honor of International Women's Day, starting on March 8, the "Hamashbir Latzarchan" network is launching a social campaign kicking off the fight against domestic violence - how did we allow simple objects such as a belt or a rolling pin to become dangerous?

In the video: Doreen Atias in a monologue about domestic violence (Photo: Rafi Daloia)

Hamashbir Latzarchan is a consumer retail company, in which the senior management level consists mostly of strong and enterprising women and over 70% of the facts are women.

The violent atmosphere in Israeli society these days, which is often also expressed in domestic violence, has led Hamashbir Latzarhan to take a position and in a new and poignant campaign, the network is launching an important and cross-sectoral social statement against violence wherever it is.

The campaign will include civic and value-based activities on issues of violence against women and on topics of discourse on social networks, in which the hand is light on the keyboard, and will deal with the desire to learn to accept and contain the other and the different.

Hamashbir Latzarchan wants to remind us all that the products sold online are meant to make us happy and excited, and not to be used as a tool for bullying and physical violence.

The issue of violence against women receives a special focus in honor of International Women's Day, starting on March 8, and the network comes out with a clear message, using labels attached to products with various slogans such as: "Women's Day reminder - shoes are only meant to lock on legs", "Belt is only for pants" , "The jewels are not meant to correct the conscience", "The make-up is not meant to hide signs of violence", "The pillow is meant for sleep and not suffocation", "The knife for cooking and not bullying", and "The rolling pin, which has become a symbol of violence, is for baking good things ".

Clothes, perfume and beauty are hallmarks of style and lifestyle, not accessories designed to hide signs of violence and beatings.

The various products will be accompanied by slogans against violence (Photo: Rafi Daloia)

Hamashbir Latzarchan decided to delve deeper into social involvement, as an existential basis for the company's continued conduct.

This is not a one-time, one-time activity, but an ongoing one, which will be carried out in collaboration with associations and organizations that work to promote the status of women.

On the occasion of International Women's Day, it was decided on the Hamashbir Latzarchan network, in addition to discounts and promotions, to make a financial contribution to the "LA, Not to Violence Against Women" organization, which represents all sectors and works against violence in society.

In addition, stresses Shirley luxury Jaegermann, Deputy Director General, that the network can find it everything for the whole family, including fashion collections, textiles and bedding, brand shoes, sports, cosmetics, jewelry, etc., involved so they can and will harness the network providers further steps.

Campaign This will lead to Doreen Atias, the network's presenter, an opinionated and brave woman who is not afraid to express her views even if they are less accepted.

The Hamashbir Latzarchan network hopes that other large companies in the economy will join the struggle and provide mutual guarantee to each other.

"Together we can make our society a pleasant and better place to live," says Peer Yegerman.

"It's time to not only speak, but also to do. I hope more organizations will lead social agendas with values ​​of contribution to community and society, and together we will create a value society, inclusive and accepting, with a discourse of emotion and warmth and not of violence."

For a safer and more inclusive society (Photo: Rafi Daloia)

Enough violence: Hamashbir to the consumer in a campaign against violence against women led by Doreen Atias - Walla! Fashion 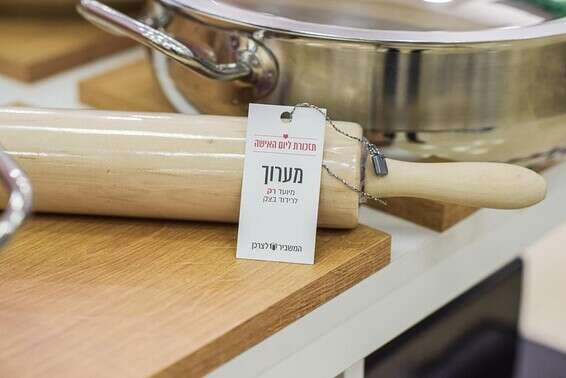 All men are murderers? The campaign that caused a stir Israel today

Learned from the best: Galit Gutman's daughter has a great style - Walla! Fashion

Strapless victory: everything that happened at the opening gala of Fashion Week - Walla! Fashion

After the election go shopping: 12 equal discounts not to be missed - Walla! Fashion

That's not how we saw Zehava Ben throughout the season of "Big Brother" - Walla! Fashion