Lady Gaga and Adam Driver got into the shoes of Patricia Reggiani and Maurizio Gucci in a new thriller. When is the film coming out? Who plays it? And what flaws do we see there? all the details

"Gucci House": Everything you need to know about the new movie starring Lady Gaga and Adam Driver

Lady Gaga and Adam Driver got into the shoes of Patricia Reggiani and Maurizio Gucci in a new thriller that unfolds the relationship between the two - until the assassination of the head of the Italian fashion house.

When is the film coming out?

And what flaws do we see there?

Lady Gaga and Adam Driver got into the shoes of Patricia Reggiani and Maurizio Gucci (Photo: Screenshot, Instagram)

Lately, it is impossible to avoid the teasers that are flooding us everywhere on the social networks of Lady Gaga and Adam Driver on the set of the new film starring "Gucci House".

If you still somehow managed to escape the flood of photos, you missed a crazy purposeful display of precise clothing chosen for these two giant stars who got into the shoes of Patricia Reggiani and Maurizio Gucci.

Since the images leaked from the set, on purpose of course, made us want to run to the cinema soon and watch the products, we decided to concentrate on all the details of what is expected to be the must-see film of the year.

What is the film about?

Despite the connection to the popular Gucci fashion house, this is a film that is more geared towards the worlds of suspense and crime.

The film tells the story of the relationship between the Reggiani and Gucci couple, and the events that eventually led to the assassination of Mauricio Gucci, the head of the fashion house, in 1995.

The film is based on the book "The Gucci House: The Sensation of Murder, Madness, Glamor and Greed" written by Sarah J. Forden and published in 2001.

Why didn 't she shoot Gucci himself?

"My eyesight is not so good. I was afraid to miss."

Gaga and Driver on the set (Photo: GettyImages)

What happened in reality?

Gucci and Reggiani were married in 1973 and had two daughters - Allegra and Alessandra.

Reggiani was known as one who loves the good life, and one of her famous quotes is: "I would rather cry in a Rolls Royce, than be happy on a bike."

In 1991 they were officially divorced.

After the breakup, Gucci was marked as wasting his fortune unconsciously.

Four years after the divorce, Gucci was murdered at the entrance to his office in Milan, and is 46 years old at the time of his death.

Less than two years later, the divorcee was arrested, and during the investigation of the murder it became clear that she was the one who ordered his assassination.

When asked why she did not shoot Gucci herself, she replied: "My vision is not so good. I was afraid to miss."

Throughout the highly-reviewed trial she was nicknamed the "Black Widow," and was eventually convicted and sentenced to 29 years in prison.

In 2016 she was released after 18 years due to good behavior.

Was not the first choice for the position.

Who plays in the movie?

So as mentioned, the main actors are Lady Gaga and Adam Driver, but next to them there are a few other big names on the set.

Among others, Al Pacino, Jared Lato and Jeremy Irons.

The director of the film is Ridley Scott, who is behind successful works such as "Gladiator", "The Eighth Traveler", "Hannibal" and "Thelma and Louise".

According to rumors, Adam and Gaga were not Scott's first choice for the lead roles, and names such as Angelina Jolie and Leonardo DiCaprio, Penelope Cruz who starred in the series on the murder of Versace and even Margo Ruby were considered.

The idea for the film has long been proposed and only now is it being implemented, so the creators had a long time to wrestle with the actors who will play the lead roles.

However, the photos released from Adam and Gaga's set suggest that the final choice was not bad at all.

The network is already talking about crazy chemistry, just like the one that existed at the time between Gaga and Bradley Cooper, which made surfers wonder if there was an affair between them and if this was the reason for Cooper's breakup with his then-partner, Irina Sheik.

When is the film expected to be released?

The date was not chosen for nothing, it turns out that this is the date on which the Italian fashion house Gucci celebrates its centenary.

Beyond that, abroad these are the days before Thanksgiving, which are known as a successful period for making films. This is also a family period when going out together for a film and also the period just before the ceremonial season. Will the film arrive in Israel on this date? Probably not, but we can only hope Wait for him a lot.

Where is he photographed?

The film is shot in Italy to be as authentic as possible.

At first the filming was in Rome and then moved to Milan, and some scenes were also filmed right in the north of Italy, on the Swiss border.

The first image distributed from the film was taken right there.

What locks have we already seen?

So far we’ve had a pretty impressive glimpse of locks from Reggiani and Gucci’s wardrobe.

The first photo distributed from the set shows a driver in a braided turtleneck sweater and next to him Gaga adorned with all the goodies - gold chains, large earrings and a furry white hat in an Eastern European style.

Another block she is seen wearing a brown and polka dot dress, which kind of made us all remember Julia Roberts from "Beautiful Woman".

Some other interesting looks that were seen on Gaga: a plaid trench coat with a scarf tied to a standard scarf, a red dress and a fur coat, we also saw the same coat over a floral dress, a set of brown leather skirt and a Pussy Bow shirt in matching shades, a white lace outfit and a monogram shirt The saleswoman of the fashion house.

All the bags and shoes are also Gucci iconic models.

Driver for his part mainly wears tailored suits, turtlenecks or ruffled sweaters over buttoned shirts, with the collar protruding.

We seem to expect quite a bit of fine style, and a great many nostalgic Gucci clothes to cuddle up to.

Lady Gaga and Adam Driver on the set (Photo: GettyImages) 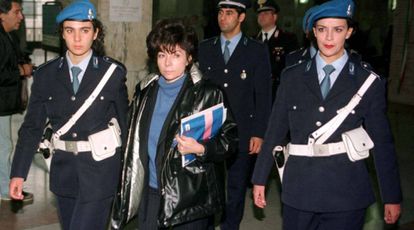 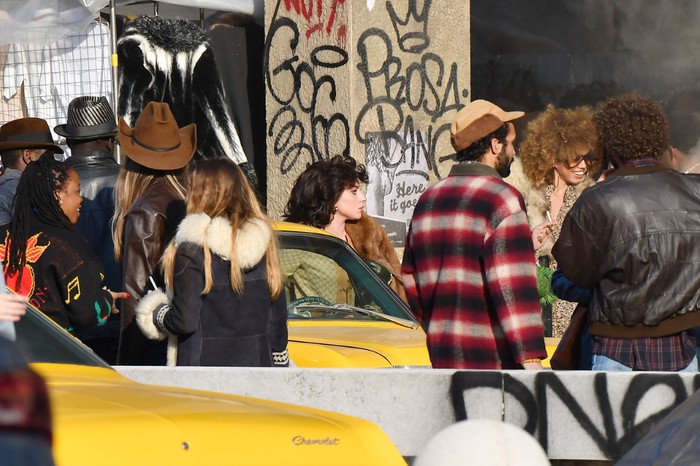 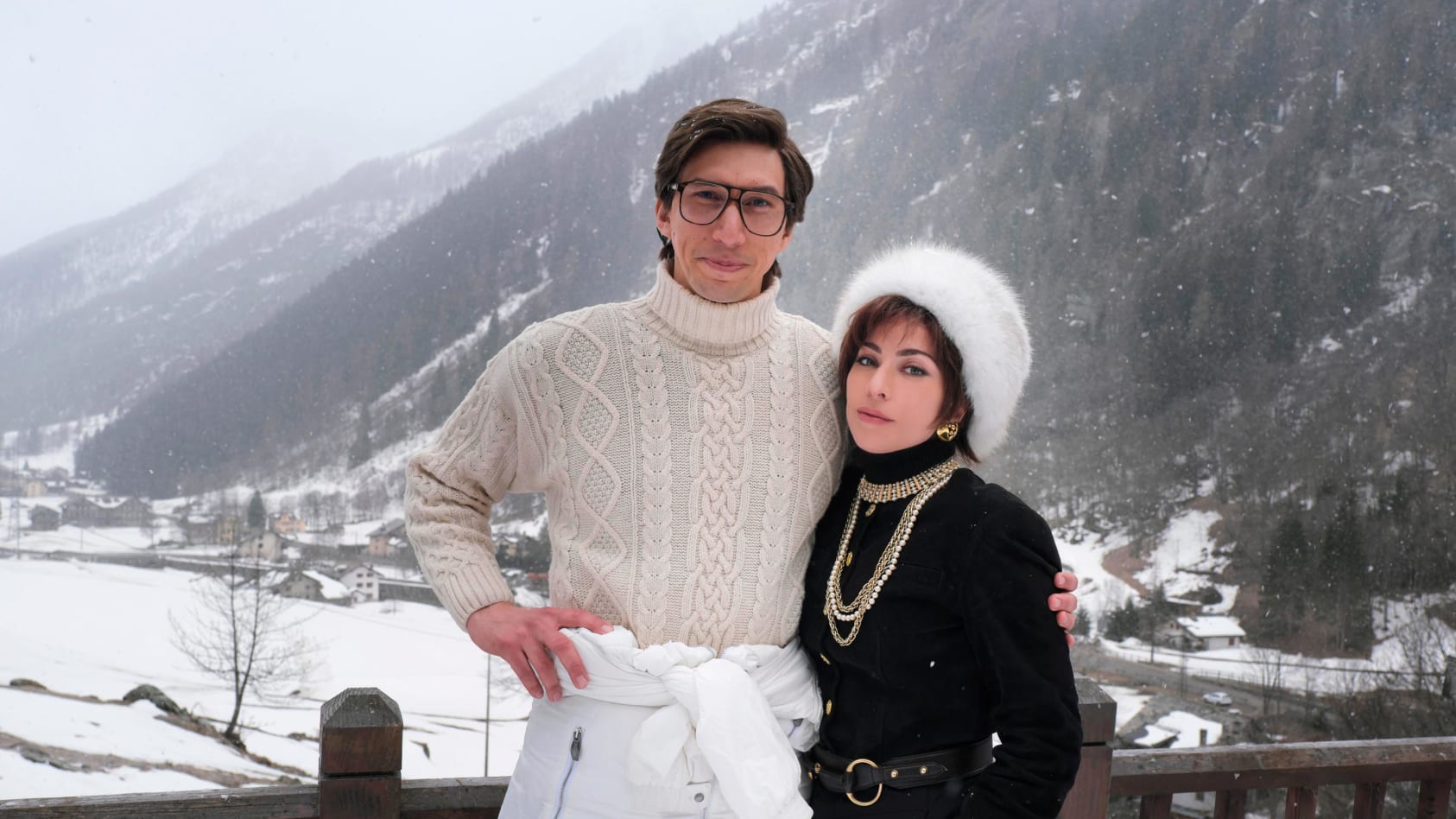 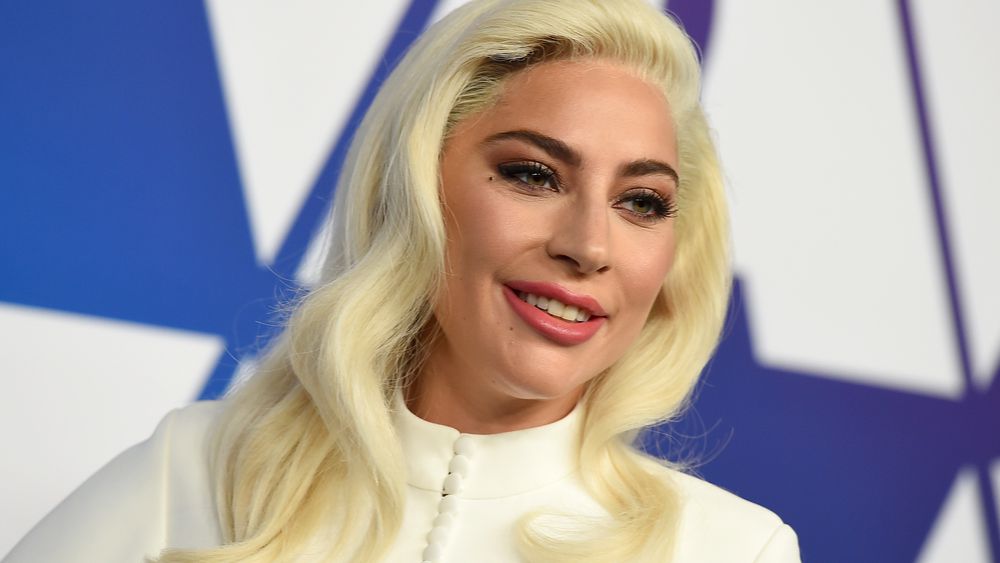 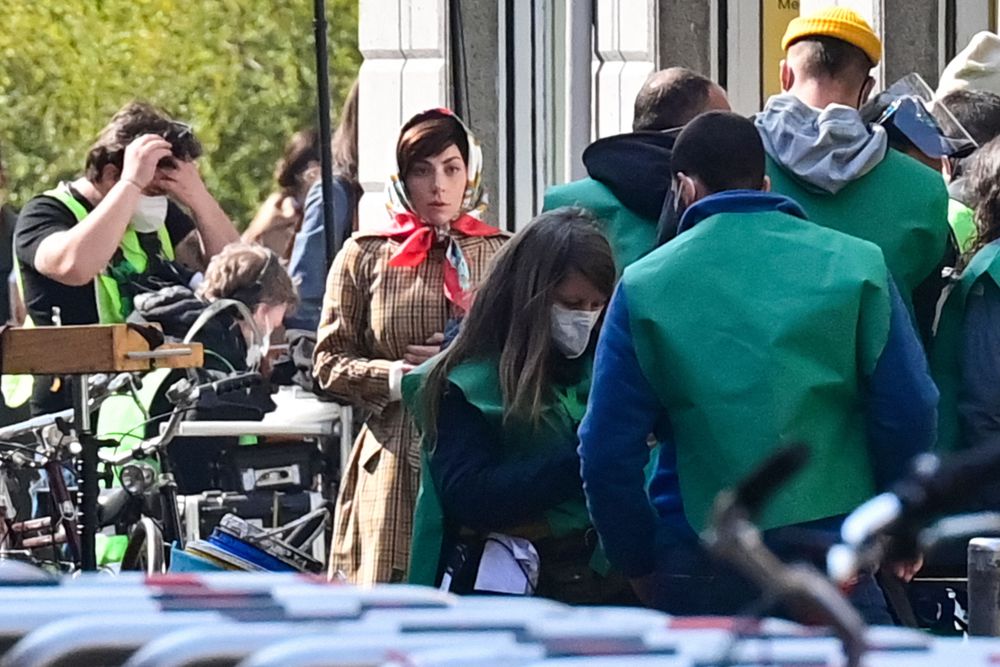 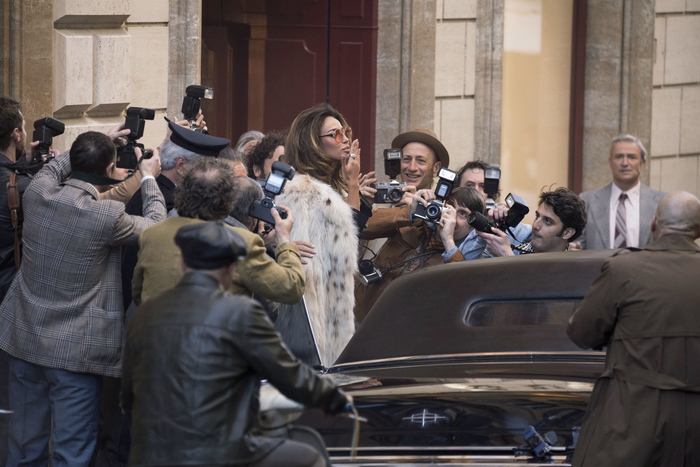 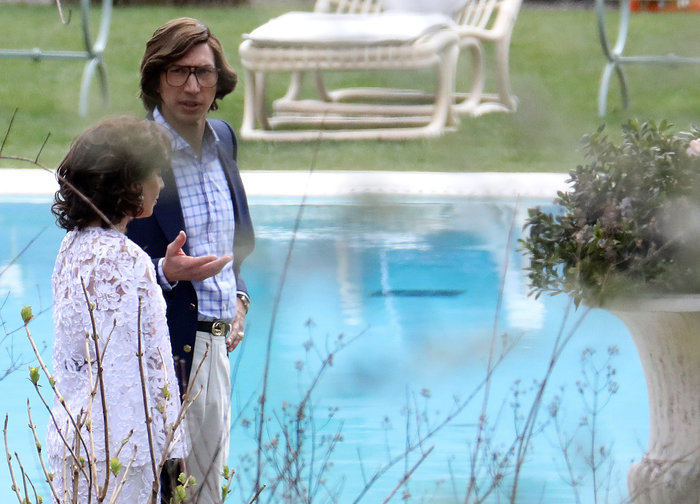 Shooting on Lake Como for the Gucci film with Lady Gaga