The Government unlocks the 'trans law', which will recognize free gender self-determination

The text, which will foreseeably go to the Council of Ministers on June 29, accepts the change of name and gender in the DNI only with the will of the person who requests it, who must ratify it within a period of three months 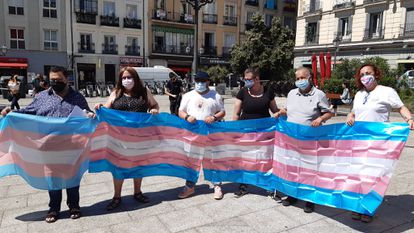 Representatives of LGTBI groups, on June 7 in the Plaza de Pedro Zerolo, in the Madrid neighborhood of Chueca.

The negotiation to close a

, stalled since February, has run amok. Negotiation sources have confirmed that the Government has unblocked the processing of this rule, which will foreseeably be taken to the Council of Ministers on June 29, in full celebration of Pride. The great obstacle that faced the members of the Executive, United Podemos and PSOE, was what is known as free gender self-determination, which supposes that the will of a person is enough to change the name and sex in the DNI, without the need to medical reports or years of hormonal, as it happens now. The consensus solution involves including three months as the administrative period from the request for the registration change for the person to ratify their decision.

For the Ministry of Equality, led by Irene Montero (United We Can), which has been negotiating and trying to approve this rule since February, free gender self-determination was inalienable, as well as for LGTBI and trans groups who have been consulted and heard during the process.

Finally, it will be included in the law, as

and EL PAÍS has confirmed.

, to which EL PAÍS has had access and which may undergo changes, it is stated that "any person of Spanish nationality over 16 years of age may request by themselves before the Civil Registry the rectification of the registration mention of sex". She adds that "within a maximum period of three months" from her first appearance, the person in charge of the Civil Registry must summon her again to ratify her request, "asserting the persistence of her decision." Once confirmed, the resolution will be issued "within a maximum period of one month from the date of the second appearance." That is, the total term will add up to a maximum of four months. This administrative procedure has convinced the first vice president of the Government, Carmen Calvo (PSOE), who has been the most reticent with this rule, for which she asked for "legal certainty."

When the draft of the law prepared by Equality was known in February, Calvo publicly rejected that sex could be changed only with the will and requested "legal certainty" in the text so that it is not overthrown by the Constitutional Court, which they hope that Vox or PP will carry it for sure.

Behind Calvo's words and on the part of Spanish socialism is a representation of the feminist movement that fears that this change may have irreparable consequences for the laws and advances made by women.

In the last week there have been many meetings and meetings "at all levels" to unblock the situation, according to sources in the negotiation. On Friday, in fact, the first vice president, Carmen Calvo; the Minister of Equality, Irene Montero, and the Minister of Justice, Juan Carlos Campo. From that meeting, the commitment came to bring the text to the Council of Ministers on June 29, in time for the Pride celebration, and to continue negotiating while the document is fringed. After that first step, the text still has the review of the advisory bodies and all the parliamentary proceedings in the Cortes, with the contributions and amendments of the rest of the groups, before its eventual approval as law.

There have also been meetings with different trans and LGTBI groups, very active in negotiating the text. Representatives of the State Federation of Lesbians, Gays, Trans and Bisexuals (FELGTB), the Chrysallis association of families with trans minors and the Triángulo foundation went to La Moncloa on June 7 to make their proposals and try to unblock the negotiation. They were called urgently after calling a press conference to discuss the difficulties in carrying out the law. Both these groups and Equality raised the period of three months in the Civil Registry and rejected that it be a witness or third person, as the PSOE considered, who would accredit the request for registration change.

The differences between the partners of the Government led the socialist party to even vote against - with PP and Vox - the attempt to activate the 'trans law' in Congress, where minority groups took it.

That day, in the rostrum, the Minister of Equality requested the floor to "apologize" to LGTBI groups and commit to recognizing the "self-determination of gender identity" before Pride, to which if everything goes according to the script they arrive by the hair.

The Minister of Equality, Irene Montero, intervened in a ceremony on June 16.

The current draft merges the two bills that the Executive partners had agreed to in their government agreement, one on trans people and the other LGTBI, although the final text gives preponderance to the recognition of trans people, as demanded by both groups and Equality . Fringes are still missing to close that joint text, but the one that from the beginning was the main difficulty has been saved: the free self-determination of gender

Currently, the person who wants to change name and sex on the DNI must request a medical appointment, start a hormonal process and obtain a psychiatric certificate, which lengthens the process between two and three years, according to the calculations of the organizations.

The text of the draft is in tune with the proposal made by the PSOE itself in Congress and which was approved in the Chamber in 2019, in which no deadline was foreseen.

Also with the regulations approved in 13 autonomous communities, the last Canary Islands, which unanimously took it forward recently.

They also do not include reflection periods.

On minors and other pending issues

The draft presented in February by Equality also included free gender self-determination for minors, another point that aroused misgivings. The organizations had proposed that the change be divided into three tranches. Children under 12 years of age could only request a change of name, not sex, with their families. From 12 to 16, also accompanied by the family or legal guardians, the change in the registration of sex and name. And, from 16, without any guardianship. The draft has not collected it like that, for now. The authorization for the registration change of name and sex is contemplated from the age of 14. Between the ages of 12 and 14 it can be done in court. If the parents do not agree with each other, a legal defender will be appointed.

The age ranges are one of the aspects that will continue to be negotiated in the coming days before taking the text to the Council of Ministers, to try to lower it to 12 years and to include, as already collected by different regional laws, that the Trans minors can, at any age, change their names in schools to facilitate their transit.

Issues related to access to healthcare for trans people or the inclusion of assisted reproduction treatments for lesbians, bisexuals and “people with the capacity to carry children” are also under negotiation.

The text of the law, whose objective is to “develop and guarantee” the rights of LGTBI people to ensure that in Spain “affective, sexual and family diversity can be experienced with full freedom”, according to the explanatory memorandum, foresees more measures .

The draft provides an express mention that, with the change of sex in the registry, the person will not be a retroactive beneficiary of positive discrimination measures included in the Equality Law, approved in 2007. This registry rectification also provides for the text, will not eliminate the "legal obligations" that the person had previously, in particular those included in the comprehensive law against gender violence, 2004.

They are the practices destined to “modify the sexual orientation and identity or the gender expression of the people”. The draft prohibits them even when they have the consent of the person concerned or their legal representatives. They are considered a "very serious" offense, punishable by fines of up to 150,000 euros.

In couples formed by a man and a woman, it is enough for the man to assume paternity to process the filiation of a baby. But in the case of a couple of unmarried women, this is not allowed, and for the biological mother's partner to appear as the parent of the newborn, they have to adopt it, which means a processing time during which the second mother does not He has no right or obligation to the child, or the little one over it. The draft includes the modification of article 120 of the Civil Code so that for non-matrimonial filiation it will serve that "at the time of registration of the birth", the "father or non-pregnant parent" makes a conforming declaration "in the corresponding official form ”.

LGTBI diversity in the educational field.

The Government, after consultation with the autonomous communities, according to the draft, will include "content related to the treatment of sex-affective and family diversity of LGTBI people" in the agendas for admission, access and acquisition of new specialties in the teaching bodies. The Administrations, in addition, "will promote the introduction of positive LGTBI references in school materials, in a natural, respectful and transversal way, at all levels of studies and according to subjects and ages".

The draft considers, among the serious offenses, "the introduction, promotion or tolerance of discriminatory labor practices based on sexual orientation and identity, gender expression or sexual characteristics in companies that receive subsidies, bonuses or public aid." And among the very serious, the use or dissemination in educational centers of textbooks and materials "that present people as superior or inferior in human dignity based on their orientation and sexual identity, gender expression or sexual characteristics." 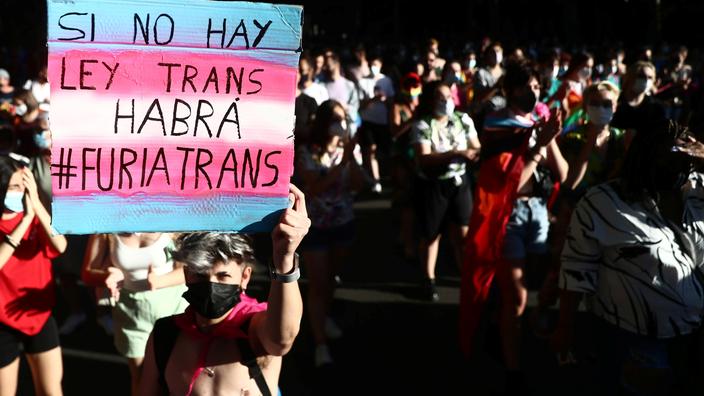 Spain: citizens could soon choose their gender from 16 years old

The Government unlocks the 'trans law', which will recognize free gender self-determination 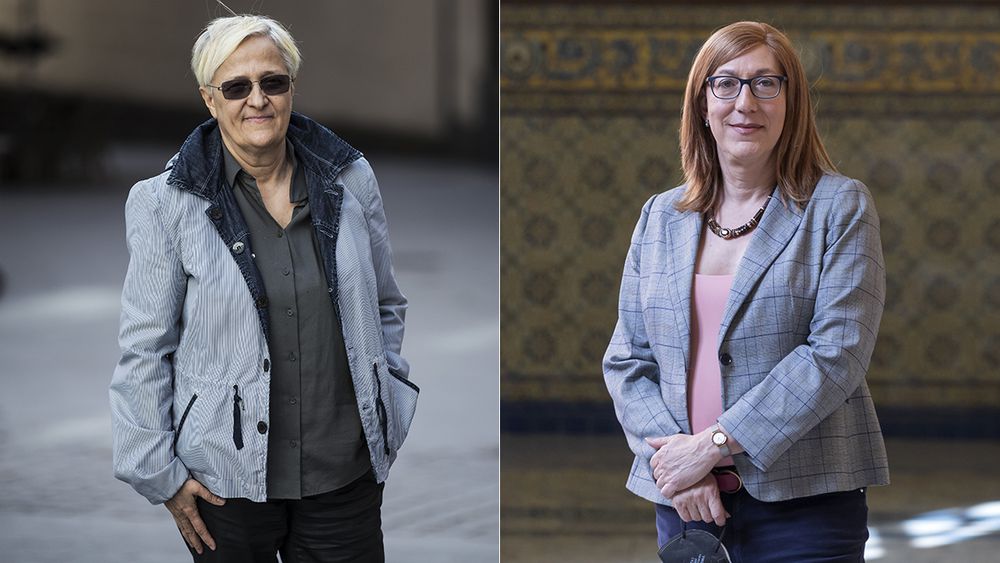 The 'trans law' from opposite angles Europe prefers free gender self-determination from the age of 18 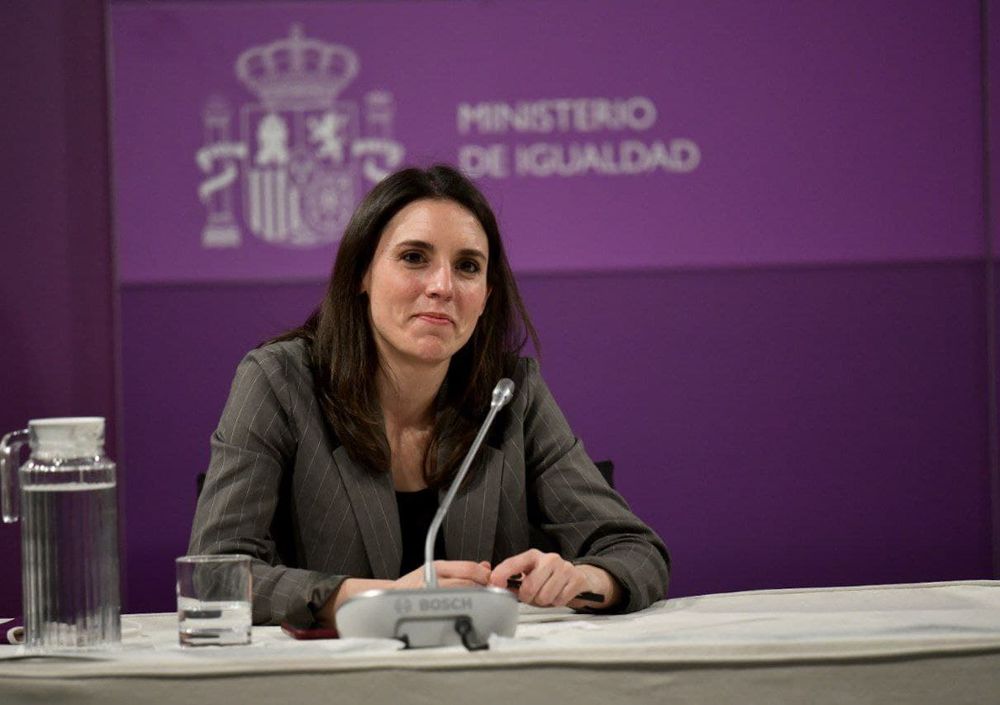 Irene Montero, on the 'trans law': “I can't give in. This legislature will be approved " 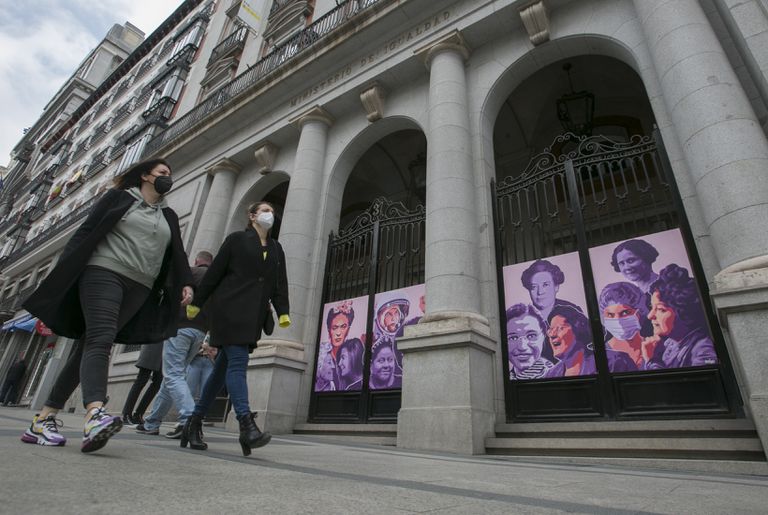 Feminism parks its differences in the 8-M of the pandemic 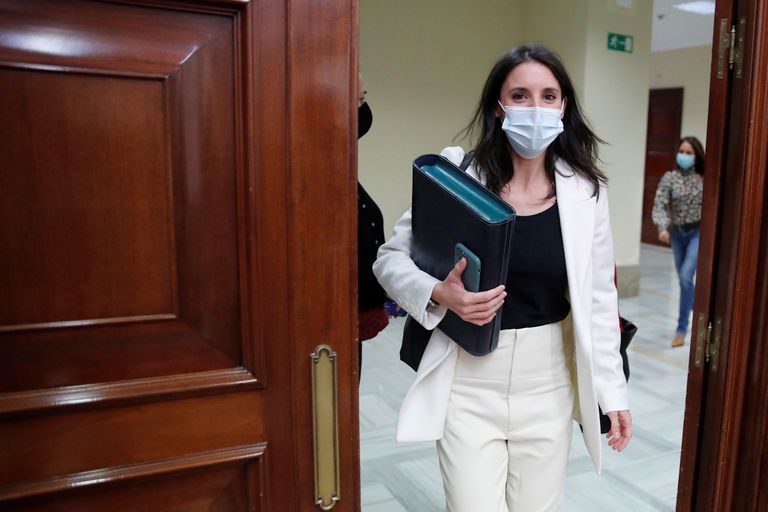