"Healthy Coke": The new carbonated drink that everyone prepares - is it healthy or tasty? - Walla! health

A dubious combination of balsamic vinegar and soda is distributed on the net under the hashtag "healthy cola" because according to some (brave) who tried - its taste is reminiscent of the taste of cola. Does it really stand the test of taste?

"Healthy Coke": The new carbonated drink that everyone prepares - is it healthy or tasty?

A rather dubious combination of two ingredients distributed on the net under the hashtag "healthy cola" because according to some (brave) who tried - its taste is reminiscent of cola, its color is the same and it contains much less sugar and of course zero caffeine.

The carbonated drink has become a viral trend - but does it really stand the test of taste?

This is how you create the "healthy voice" (@mandyvjones)

Many are talking about the health damage of carbonated beverages.

A study published last year found that drinking Zero or any other diet drink is as harmful to our health as regular sugary drinks are harmful to it.

Now a new carbonated drink claims to be really healthy - and apparently lives up to its promise.

However, its creators have claimed that it also mimics the cola's favorite flavor - and there it's probably already forging big.

The drink that has earned the dubious name “healthy cola” is actually a combination of balsamic vinegar with soda.

Ticketwoman Amanda Jones, @Mandyvjones, shared the "recipe" she said she received from her Pilates instructor who claims she has been enjoying it for two years and that it really reminds her of the addictive taste of cola.

More like "the healthy alternative to her voice," as she noted in the video.

While the product looked like cola - brown, carbonated and refreshing looking - the matter of taste left us skeptical.

She added: "I'm not kidding with you, it tastes just like her voice. You will think I'm crazy.

For the brave who want to try - this is how to make it at home:

Take a glass of ice, pour in a little balsamic vinegar (15 grams according to what Amanda mentioned, or 1-2 tablespoons of balsamic vinegar if you do not feel like getting involved) and then fill the glass with baking soda of your choice.

Amanda for example used LaCroix guava flavored soda, but it will work for you with any type you choose.

In less than a week her video garnered close to seven million views and inspired hundreds, if not thousands of videos to go up under the hashtag #HealthyCoke, mostly of those who did not believe vinegar could miraculously turn into a tickling voice.

"Zero chance the taste is like cola," wrote an unconvinced viewer and then added, "Your goal is just to get hundreds of people to drink balsamic vinegar with ice. It's abuse."

Another person wrote: "It's like vegans tell you it tastes like cheese, but they haven't tasted cheese in years."

Another concluded in one word: "Prison!".

Soda Secret: Is Carbonated Water Good For Your Health?

This is how the prey began:

@mandyvjones Hopefully this helps you guys!

On the net you will find an excessive number of people who have tried to make the healthy cola.

Before you rush to try too - we brought you some comments.

Mia Marcado from The Cut sipped and wrote: "Since I'm a scared little baby, I tried half a tablespoon of balsamic vinegar on a glass of ice and added plain soda water until the drink was similar to cola. It was fine. It was light and refreshing in a way that carbonated drinks are usually light and refreshing. "But you can definitely taste the vinegar. I added some lime juice because I did not have lemon juice at home - I am the queen of improvisation - which made it a little more tolerable ... the combination is not completely repulsive."

She added: "Is it delicious 'like cola'? Absolutely not. The taste of cola is hard to get ... it can definitely be a 'healthy' alternative to cola, if you are looking for a drink with less sugar, but you know what also has less sugar. "Normal cola and has no aftertaste of vinegar? Soda, plain water or Diet Coke. I found this balsamic drink pleasant in a weird section, although I have no intention of recreating it."

Kelly McCarthy of ABC News said: "While the color looked very similar to the caramel brown of the cola, the smell and taste were very far from the original. The taste was less sweet but still felt a little syrupy, minus the classic cola flavor. The vinegar created a more similar taste to kombuchi God".

"Sometimes you just know that the ticking trend is going to ruin your day, but for some reason I just had to try the healthy cola to see if it really stands the test of its diabetic counterpart," wrote The Kate Lror's lifestyle reporter Daniel Kate Ware, "watching the videos, already I had a gut feeling that it was probably just as delicious as drinking a glass of vinegar, but I just had to try it myself for the sake of science. To say I had to use every fiber of my being so as not to spit this drink out would be an understatement. As soon as it touched my lips,

@healthylittlepeach A healthy version of a coke ?.

Also in the American morning show they decided to try the trend and prepared the drink with the help of two types of balsamic vinegar.

The first was with standard balsamic vinegar when the verdict was “no” quite resounding.

The other was with an old-fashioned balsamic that actually received more positive reviews and ostensibly reminded me of the classic cola flavor, according to presenters Hoda and Jenna.

Judging by a few dozen videos and responses encountered, there seems to be general agreement that the drink may be tasty or at least pass through our throats - because nonetheless the natural sweetness of the balsamic is indeed a bit reminiscent of the sweetness of cola - but it is not really as tasty or similar to cola That we know.

And it got to the American Morning Show hosted by Hoda and Jenna:

It tastes less, but is it healthy?

Perhaps the question that is more correct to ask here is whether health is worth the hassle to us?

Miranda Galati, owner of Real Life Nutritionist, claims that "unfortunately, the taste of this drink is really not like the real thing."

She told Newbeauty: "It tastes as you would expect it to have - vinegar in soda water. What is not up for discussion is how healthy this alternative is. It is definitely healthier."

By comparison, a classic can of cola (330 ml) contains 39 grams of sugar, while one tablespoon of balsamic vinegar contains 2.4 grams of sugar. Passions for sweets and even improving longevity, "says nutritionist Jennifer Hanowi. Noom coach Kendra Gotschov added:" It also helps lower cholesterol, acts as an antioxidant and aids digestion. "

"Balsamic vinegar is made from grapes, which are rich in polyphenols. It is believed to have many health benefits such as improving blood circulation," says Erin Hendrix, a doctor at Salvo Health. "Vinegar has also been shown in some studies to improve blood sugar levels."

@zozoroe WOW IT REALLY DOES TASTE EXACTLY LIKE COKE ???

"You should also note that you do not use balsamic vinegar to which sugars have been added," Gotschow warns. ".

As for soda: "It's a good alternative to sugar-reduced carbonated drinks," Gotschow says.

However, not everyone thinks so.

Dr. Hendrix notes that some people may experience "symptoms of bloating, gas or reflux from the carbonated soda water."

"If you really enjoy the taste of this drink, it may be worthwhile for you, otherwise, it is not a useful substitute. There is nothing particularly nutritious or health-promoting in this drink," says Galati. "The 'healthy substitute' is only helpful if it is something you want "Keep drinking from it. If this drink satisfies you the same way that soda does, it may be a good choice. But if you do not like this drink, you will probably return to your regular carbonated drink in a short time, so there is no point in it."

Dr. Hendrix added: “If this drink will not help you quit with your very unhealthy cola habit, you should explore other alternatives.

It is important that you have healthier options for drinking and ways to avoid more sugars.

enjoys a flavored soda when she craves sugar. It is also a great tool to help with cola: "Soda water can also be a great way to cut down on sugar in other juices or sugary drinks. .

Adding 1⁄2 soda to these drinks and gradually increasing it is a strategy that works well for many who want to reduce their consumption of their sugary drinks, ”says Gotschow.

Galati offers to focus on water as your primary source of drinking.

For a tastier alternative, she suggests "adding a little juice, fruit mix or flavor drops to your water instead of vinegar. A fun option for summer is to keep pure fruit in ice cube trays in the freezer and add those to your carbonated water."

"Healthy Coke": The new carbonated drink that everyone prepares - is it healthy or tasty? - Walla! health

The trend that is stirring the web: Get to know the healthy Coke | Israel today 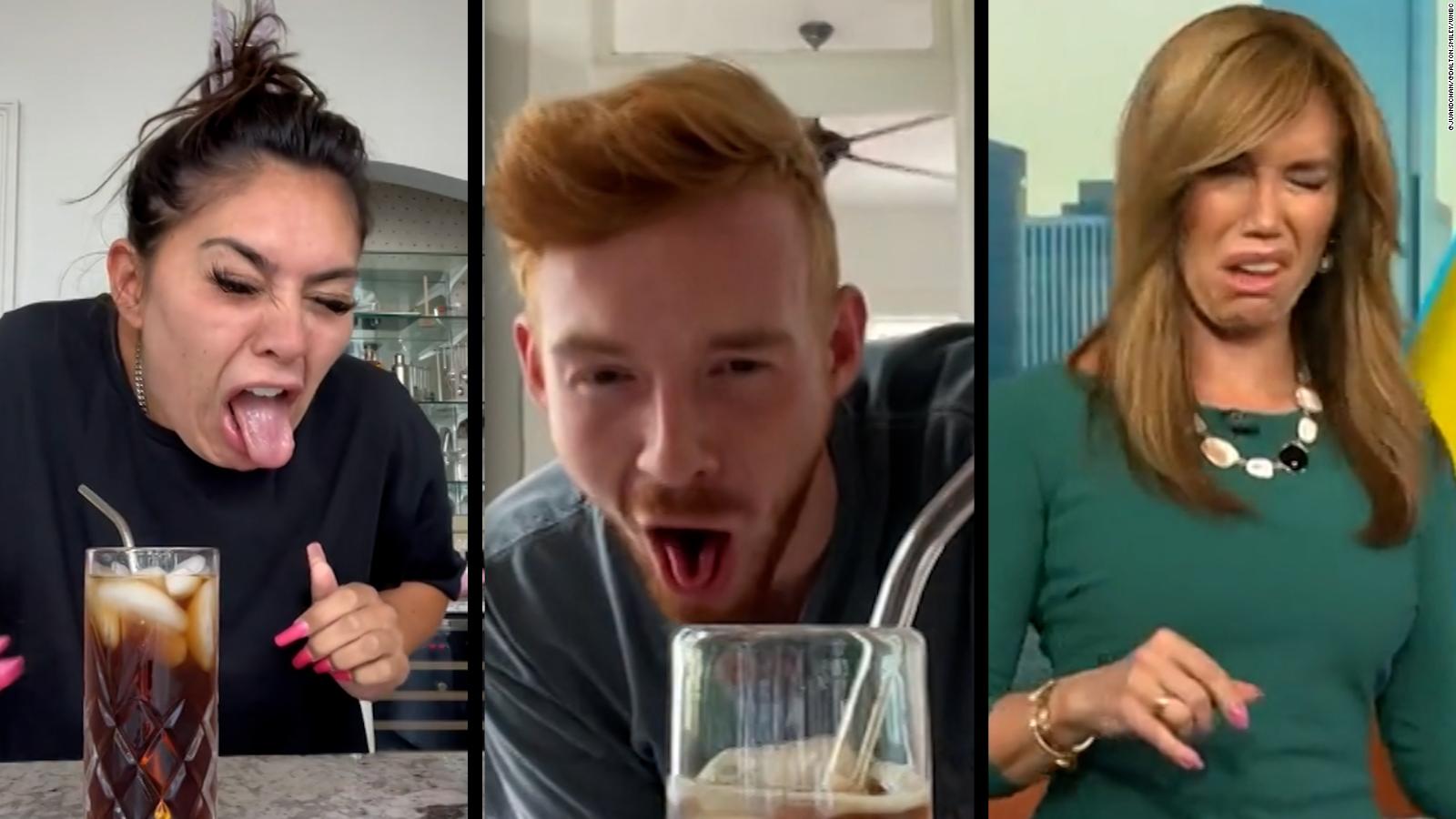 The surprising habit in the morning coffee that is really good for your health - Walla! health