Glacier break-off in the Dolomites: Injured Germans are doing better

The Germans injured in the glacier accident in Italy are on the mend. Meanwhile, the rescue workers find items of clothing on the Marmolada. Experts want to check whether these can be salvaged. 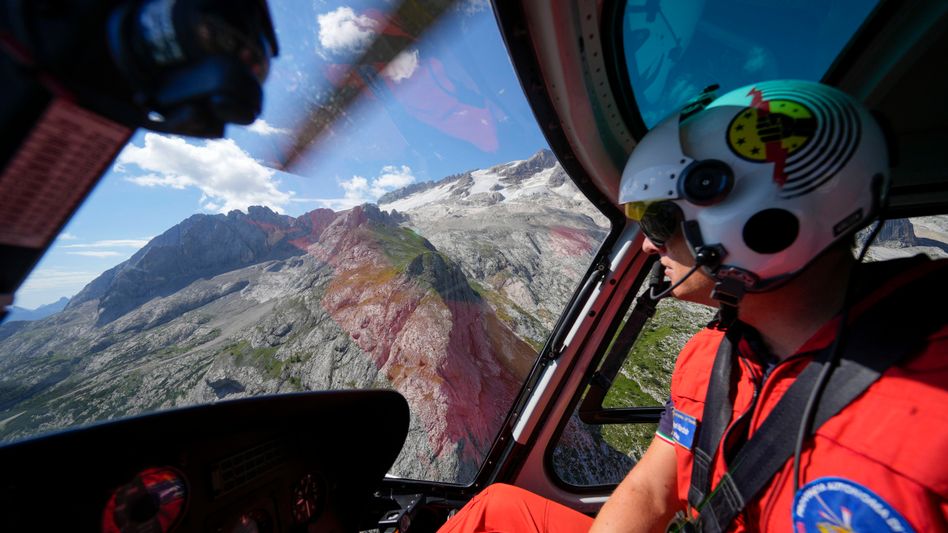 Rescue pilots in the Alps: search for missing persons

The two Germans injured in the glacier fall in northern Italy are doing better.

Her state of health is stabilizing, says the health authority in Veneto, in whose clinics the man and the woman are.

Doctors in the province of Belluno operated on the 67-year-old on Tuesday for his injuries.

He will remain in intensive care for the time being.

The 58-year-old woman was transferred to a normal ward and will continue to be monitored there.

During drone flights at the site of the deadly avalanche accident in the Dolomites, the rescue workers discovered clothing.

It is unclear whether it is the clothing of the victims, said a member of the Trentino helicopter unit, as reported by the Ansa news agency.

The experts then want to check whether and how the clothing can be recovered and whether there may be victims.

Drones were mainly used in the search, as a search on the ground was still too dangerous.

The avalanche in northern Italy killed at least seven climbers on Sunday afternoon on the glacier in the Dolomites.

Eight people were injured, including a man and a woman from Germany.

13 people were missing on Tuesday morning - in the afternoon the authorities then confirmed that they had contacted four missing foreigners who were healthy.

In addition, the identity of an injured man who is in a hospital in Treviso could be determined.

They later updated the number of missing persons again, in the late afternoon five people were still missing.

Meanwhile, the authorities identified the owner of a vehicle with German license plates that was parked at the top of the parking lot, which is usually used by hikers heading towards the Marmolada summit.

After the accident on Sunday afternoon, nobody initially returned to the car with the number plate from Bavaria.

The authorities therefore did not rule out that the inmates could be among the victims.

On Tuesday, the police said when asked by the dpa news agency that the holder had been located and was out of danger.

He was not involved in the avalanche accident.

Because of the impending danger of further avalanches and for the undisturbed course of the rescue work, the area around the mountain remains closed, as reported by the Autonomous Province of Trento, on whose border with the Veneto region lies the Marmolada.

Authorities also released video of the demolition site on the mountain, showing a large hole and deep cracks.

The head of the mountain rescue service, Maurizio Dellantonio, promised to use up to 15 specialists and dogs to search for possible victims of the fallen glacier masses from Wednesday or Thursday.

However, the weather is decisive for the deployment of the rescue services on site on the ground.

On Monday, the authorities broke off the search and rescue work due to a storm.

The mountain rescuers fear that it could take weeks or even longer before all the dead are located and recovered from the ice and boulder masses.

The avalanche has now settled and has become very hard.

You can only dig with technical equipment, which, under the circumstances, cannot be put in place, Dellantonio said.

Experts, mountain connoisseurs as well as the Italian Prime Minister Mario Draghi and Head of State Sergio Mattarella see the consequences of climate change as the reason for the glacier break-off.

For years, the glacier ice in the Alps has been melting because of the increased temperatures.

The Marmolada area was also unusually warm in the days leading up to the accident and, like many other parts of Italy, there was a lack of rainfall.

As a result, according to South Tyrolean extreme mountaineer Reinhold Messner, the glaciers are becoming increasingly unstable.

Glacier break-off in the Dolomites: Injured Germans are doing better