"Kaiserschmarrn drama" on TV: Lisa Maria Potthoff does not think of an end to the Eberhofer thrillers Created: 07/08/2022, 16:42 By: Katja Kraft Always trouble with the hunchbacked relatives: Susi (Lisa Maria Potthoff), here with her father-in-law (Eisi Gulp). © Bernd Schuller The new Eberhofer thriller "Guglhupfgeschwader" based on Rita Falk starts in cinemas. In line with this, ARD is showin The new Eberhofer thriller "Guglhupfgeschwader" based on Rita Falk starts in cinemas.

In line with this, ARD is showing the predecessor “Kaiserschmarrndrama” on TV for the first time on August 8th at 8:15 p.m.

An interview with Lisa Maria Potthoff about the end of the Eberhofer series.

The 44-year-old actress comes to our interview in Munich in a good mood.

In the evening the premiere of the new Eberhofer thriller "Guglhupfgeschwader" is coming up.

It is the eighth film in the series.

In an interview, she reveals, who seems to be constantly present on television (“Sarah Kohr”, “Herzogpark”), that she can handle this high workload.

And how the Eberhofer series will continue.

I stumbled at one point in the film.

When Max Simmerl on drugs with two women in his arms says to Eberhofer: “You can choose one, then the four of us go to a room and then we are Lochschwager.

Great!” Does a saying like that still fit in today’s world?

Or am I overly sensitive?

If that bothers you, then you have every right to do so.

I myself am happy about coarse humor and have it myself.

And sometimes I have to be careful not to step on anyone's toes.

I think it would be nice if such sayings would lead to a discussion.

Because the provocation triggered by being politically incorrect can also be exciting.

Well done comedy has to challenge us too?

Hold up a mirror, exactly.

Questioning: Where are we going too far as a society?

What is misogynistic or anti-Semitic or otherwise discriminatory?

And I think this political incorrectness also accounts for the success of the Eberhofer crime novels.

The Austrians are almost as good at black humor as the British.

We Germans are braver there.

That's why our comedies are often not that funny.

Do you think there are limits to black humor?

Situations in which you intervene?

Of course, there were times when I was in situations on a film set in which I didn't feel so comfortable.

When I was younger, I didn't dare to always open my mouth.

But the #MeToo debate also helps me to develop an awareness of what is legitimate and what is not.

Last year I experienced a situation in which I got a spell - and I would not have noticed that it was misogynistic.

Only when another man jumped in and said to the guy who had blurted out the sentence: "You don't talk to a woman like that!" did I realize: That's right, that's actually not possible.

And I thought: How awful, I wouldn't have noticed that!

It is important that we develop an awareness of where boundaries are being crossed.

That we raise the next generation of girls and women even more self-confidently and say: a no is a no.

"Everyman" in Salzburg: the festival starts with Verena Altenberger and Lars Eidinger

Not just the girls, the boys too...

It's important that boys learn to treat girls as equals.

And I keep telling my daughters: No means no.

And I tell them: You are allowed to have secrets, every child has secrets from their parents.

But not secrets with other adults.

And what about solidarity with other women?

There are still fewer roles for actresses than for actors.

Do you manage to show solidarity and recommend female colleagues for a part?

In order to play the ball to us women and not just scold the men, I have to say: I think we can still learn a lot in this respect.

That we don't see ourselves as competitors, but understand just like the men that networks make us strong.

That women's alliances are wonderful.

I try to support women and not worry about someone else taking a piece of the cake for me.

Of course, being an actor is tricky.

Because actually we are not brought up to be ensemble players at drama school, but to be lone fighters.

That's why I enjoy the Eberhofer crime novels so much, because the focus is always on the ensemble concept.

Then it doesn't matter whether I have the punch line or my colleague.

That's why working there is such a dream.

And that's why it never gets boring?

Don't you ever think: somehow the Eberhofer is enough?

You know that too: You are having a wonderful holiday in an incredibly beautiful hotel with a view of the valley - you're going to go there again!

Of course they say, today I'm going on a trip to the neighboring valley.

And in the same way, each of us Eberhofer actors does other projects.

Then we get together once a year and have collected a lot of impressions.

It's like Christmas: the family meets under the Christmas tree.

And we meet to slip back into our roles.

It's also nice to accompany a character over the years.

To mature with her, to develop her.

But that only works because the audience mirrors us in an extreme way: keep going!

That's such a tailwind!

This is a friends reunion?

Yes, Simon and Sebastian are my friends.

And I get to work with them - that's a blessing!

Now you said that you all have other projects in parallel.

You create an insane workload.

How do you do that?

The thing is: My films are simply repeated often!

A "Sarah Kohr" thriller was now being repeated with a great rating.

But it's true, I love working and playing.

In between, I'm very active again for a few months with my children and my family.

From mid-March to mid-June, I was actually at home all the time.

I really enjoy this time.

But I also love my job.

I think it's nice to be among people, to be creative, to exchange ideas.

I couldn't just be at home.

Their success proves them right.

Why do you think the Eberhofer series is so loved?

I can only guess.

Listening to the fans, I think it's because the characters in the films tend to be loser personalities.

They are built very close to failure.

That's what makes it so charming.

There's something heartwarming about this comedy.

And also that it's politically incorrect, that it's really weird at times.

That we have great actors as guests who really throw themselves into it.

There are enough films with beautiful, perfect people.

With us everything is a bit different, more bizarre.

Apparently we're not the only ones who like to come back to them.

If you want to see more of Lisa Maria Potthoff, we recommend the RTL series "Herzogpark". Guglhupfgeschwader in the cinema: Lisa Maria Potthoff does not think of an end to the Eberhofer thrillers 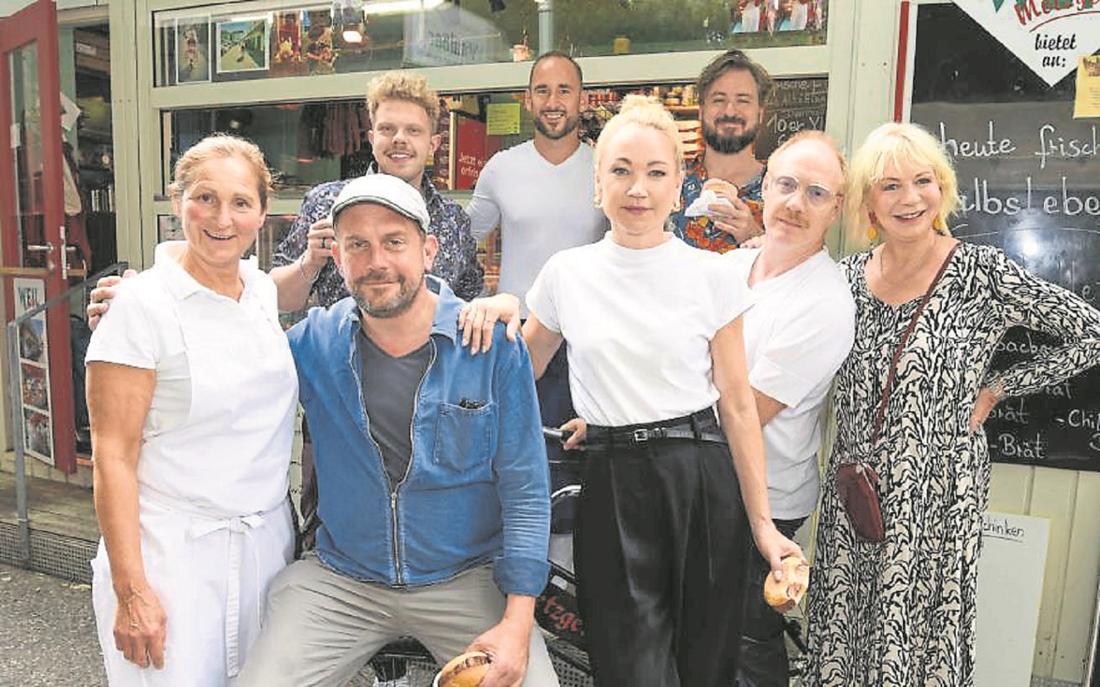 "Buba" on Netflix: Bjarne Mädel was born in pain