Rewe change: meat counter is partially vegan – these branches are included Created: 09/26/2022, 10:05 am By: Oliver Schmitz In the vegan fresh food counters at Rewe there are alternatives to meat and cheese products. © Mariella Vagabundo/Rewe Rewe is expanding its vegan range. The alternatives to sausage and cheese are now also available directly in the deli counters. But not in all branches. In the vegan fresh food counters at Rewe there are alternatives to meat and cheese products.

Rewe is expanding its vegan range.

The alternatives to sausage and cheese are now also available directly in the deli counters.

But not in all branches.

Cologne – Only recently a Rewe retailer in Kaarst (NRW) caused a stir with its vegan fresh food counter.

Now the supermarket chain itself is taking up exactly this concept.

The service counters of a total of fifty Rewe stores throughout Germany will now be expanded to include vegan food, the company announced on Wednesday (September 21).

In addition to meat, sausage, fish and cheese, corresponding plant-based alternatives are now also being presented.

In the Rewe fresh food counters, the vegan and animal products are separated from each other by panes of glass.

With the vegan fresh food counters, Rewe is clearly continuing the trend of recent years.

Just like Aldi, Lidl, Edeka and Co., the supermarket chain has greatly expanded its range of plant-based alternative products.

"This means that customers can get advice about the products and buy exactly the portions they need," says a Rewe spokesman about the step.

The vegan fresh food counter in the Rewe supermarkets is "usually" in the delicatessen or cheese area.

All plant-based foods are marked with the yellow V-Label "Vegan".

A Rewe spokesman said when asked by 24RHEIN that “low-sales meat and sausage products” had to make way for the vegan schnitzel and the like.

With fresh fish, on the other hand, everything stays the same because it has to be stored cooler than plant-based foods.

The vegan area of ​​the service counters is separated from the animal products by panes of glass.

In addition, separate crockery and cutlery is used in each case so that there is no "contamination" of the vegan goods with animal ingredients.

Rewe: Where the vegan fresh food counter is now everywhere - for the time being (selection)

The vegan fresh food counters at Rewe were opened in fifty stores across Germany on Monday (September 19).

According to Rewe, the relevant markets are located in the major cities mentioned above.

But this is a test for the time being.

Depending on how this goes, the plant-based alternatives could be extended to the service counters of other markets or theoretically removed again in the event of failure.

In addition to the Rewe market in Kaarst, other Rewe retailers have recently had a vegan fresh food counter.

For example in several markets in and around Cologne.

However, it can also happen that the service counters are not open as usual.

Because some supermarkets recently had staffing problems at fresh food counters.

Rewe: These vegan products are offered in the deli counter (selection)

With the vegan fresh food counters, Rewe is supplementing the range of plant-based alternatives, which has already grown considerably.

Depending on the size of the market, it now includes more than 1,000 vegan foods, says a spokesman.

However, the company wants to “continuously expand this range”.

Among other things, for reasons of sustainability, because vegan products would contribute to climate protection.

In the future, Rewe would like to open more stores based on the “Green Farming” concept.

The content of this article was updated on September 21 at 5:03 p.m.

Sausages out, vegans in: Big change at Rewe meat counters

Change at Rewe: Part of the meat counter is vegan

Rewe introduces vegan meat counters throughout Germany – wherever they are now The service counter at Rewe is going vegan: several markets in Hesse are there 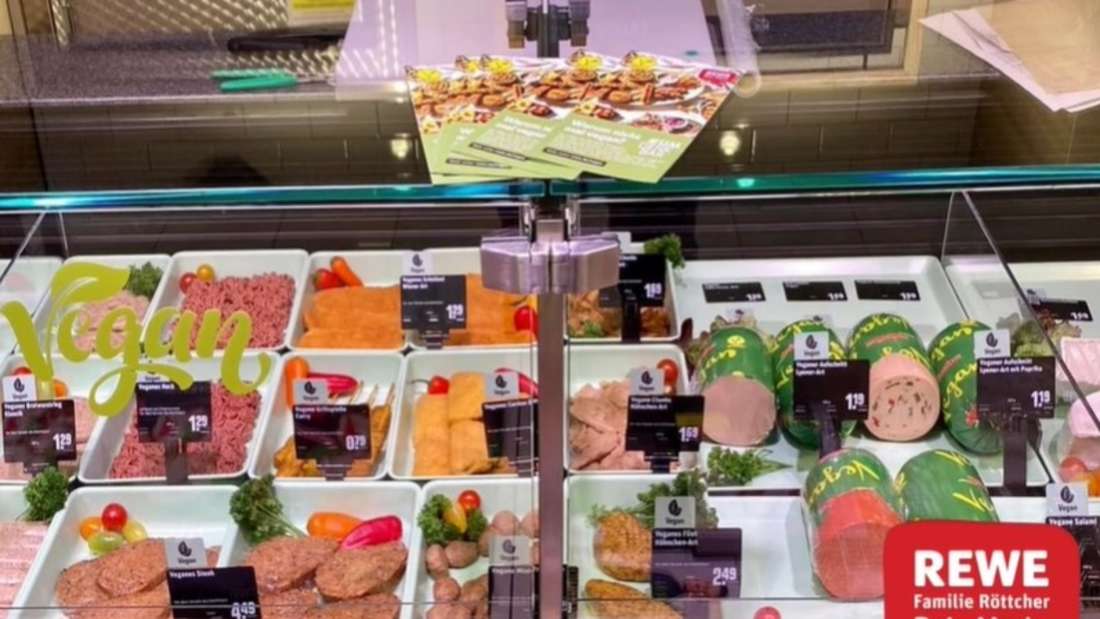