Medvedev, Russia has the right to use nuclear weapons

Moscow "will do everything possible to prevent hostile neighbors from purchasing nuclear weapons," assures Medvedev. According to London, Putin could announce on Friday the annexation of the pro-Russian "republics". Tension in Zaporizhzhya (ANSA) 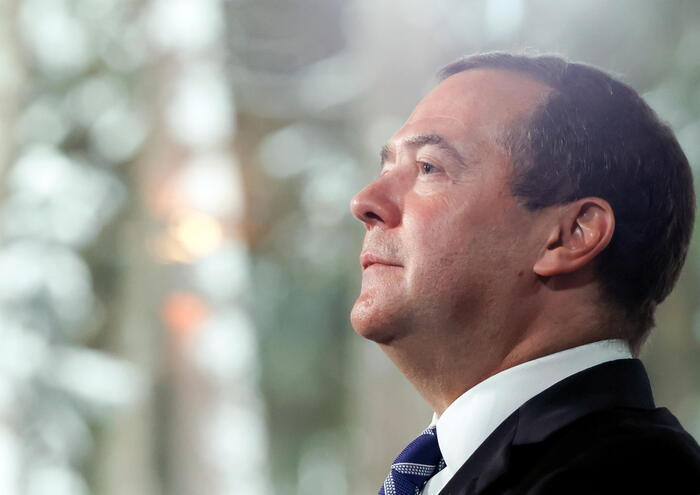 "Russia has the right to use nuclear weapons, if necessary, on the basis of nuclear doctrine": said, quoted by Tass, the vice president of

the Russian security council, and former president of the Federation, Dmitry Medvedev.

Russia - he added - "will do everything possible to

prevent hostile neighbors, such as Ukraine, from purchasing nuclear weapons".

"A Russian attack took place tonight in Kryvyi Rih (southern Ukraine): the Russians hit the airport with a Kh-59 missile. The infrastructure was destroyed," Valentyn Reznichenko, head of the military administration, wrote on social media. regional, adding that no people were injured in the attack.

The city of Mykolaiv was

"heavily" bombed during the night, Mayor Oleksandr Senkevych reports on Telegram, stating that the attacks were two and affected different areas of the city.

as well as the water supply network were damaged".

Pro-Russians, for their part, claim that the Ukrainian army bombed nine settlements in the self-proclaimed Donetsk People's Republic in the early hours of today.

According to the DPR mission to the Joint Center for Control and Coordination, cited by TASS, ten 152mm rounds and eleven 155mm rounds were fired over Donetsk before 6:00 am and eight other villages were targeted. .

They arrived at the last day of voting in the areas of Ukraine occupied by the Russians and in the cross-border centers that host refugees for the referendums called by Moscow, and defined as "a farce" by the West, for the annexation of those territories to Russia.

TASS this morning that he considered the consultation valid.

"I think today we can say that the referendum is indeed valid," he told reporters after voting.

"Three polling stations were evacuated to a bomb shelter for

They will resume operations after the bombing is over and the situation has stabilized, "the head of the LPR Central Election Commission, Yelena Kravchenko, told TASS.

President Vladimir Putin is expected to address both houses of the Russian parliament on Friday 30 September and could use the speech to formally announce the accession of the occupied Russian territories of Ukraine to Russia.

This was stated by the British Ministry of Defense in

its latest intelligence update, arguing that "there is a realistic possibility that Putin will use his speech to formally announce the accession of the occupied regions of Ukraine to the Russian Federation. The referendums currently underway in these territories they should end today, September 27th ".

According to Gb intelligence, "Russian leaders almost certainly hope that any announcement of membership will be seen as a vindication of the 'special military operation'

"The employees do not want to cooperate with the Russians and try to leave the territories temporarily occupied by the armed forces of Moscow. The occupied part of the Kherson region is completely closed in and out," writes the General Staff of the Armed Forces on Facebook. Ukraine, in the usual 6 o'clock message on the military situation. Zelenskyj advisor warns against the use of nuclear weapons - Putin henchman rumbles: "Russia has the right to do so" Medvedev: Russia has the right to use nuclear weapons if it is attacked with similar weapons