It's better without a window: this is the hotel room with the worst view in the world - voila! tourism

A hotel guest in Alberta, Canada, showed his online followers the view from his room - and there's nothing more disturbing than that

It's better without a window: this is the hotel room with the worst view in the world

A hotel guest in Alberta, Canada, showed his online followers the view from his room - and there's nothing more disturbing than that

A window is worth a lot: in hotels in Israel, as well as in many places in the world, it is customary to charge exorbitant prices for an upgrade to a room with a sea view.

In London, for example, the differences between a room with a view and one without are so significant that in some hotels the only reasonably priced rooms come with no windows at all.

In a hotel in Alberta, Canada, the rooms come with a window - but the view from there is so bad that it's better that they arrive without one.

Comedian Nima since he was staying at the hotel when he pulled back the curtain to look at the view - and was horrified by what he saw there.

He shared on TikTok the view from his room and was awarded by the viewers the title of "the worst view in the world". How bad can it be? You can't imagine how much.

In the short video he can be seen saying: "I'm in my hotel room and I thought to myself 'Wow , my curtains are closed - I need some light here'.

Then I understood, this is my landscape...".

This is the surprise that awaited him:

He then presented what he saw from his window - the women's changing rooms and showers and the children's swimming pool.

His video gained close to a million views and many were horrified by the sights.

"I'm dying. This is the worst view I've ever seen in a hotel room," one wrote and another added: "This room must have once been someone's office."

A third added: "I would complain."

Another person wrote: "This is exactly what happened to my dad last weekend. He opened his curtains in the room to see the hotel banquet hall from the window."

Maz himself said that he immediately closed the curtain so that he would not be accused of voyeurism and find his face smeared on the covers of newspapers.

It's better without a window: this is the hotel room with the worst view in the world - voila! tourism

A passenger paid for a seat with a window, and received a tiny window at the exit door - voila! tourism

The hotel where you can stay for free - but everyone can watch you - Walla! Tourism

"The Blend": the new hotel of the Golden Crown hotel chain has opened - voila! tourism 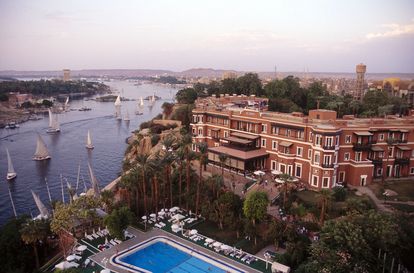 The Israeli festival that offers 10,000 treatments for the body (and mind) - voila! tourism

These are the legendary hotels that are expected to open in Dubai in the coming year - voila! tourism