Pérez-Reverte returns to Mexico with 'Revolución', a novel of learning, friendship and loyalty in the fierce ranks of Pancho Villa

The writer delimits his literary territory to the south of Río Bravo, the Mediterranean, the Arab countries and old Europe 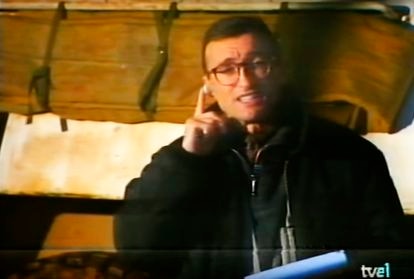 "Assault them as sergeant parriba!"

The mandate of Major Genovevo Garza, the fictitious commander of Pancho Villa's troops and one of the main characters in the new novel by Arturo Pérez-Reverte,

(Alfaguara), which goes on sale on Tuesday, was the order of the day. during the Mexican revolution, a historical event of unusual violence with episodes that seem pure invention due to their excess.

In that captivating territory of gunpowder, adrenaline, testosterone, blood and tequila moves, incorporated by chance into the ranks of Villistas, the novel's protagonist, Martín Garret, a young Andalusian mining engineer from Linares turned into a blaster who will live big and dangerous lives. adventures among the revolutionaries.

Arturo Pérez-Reverte: “I will not last.

When I die, no one will remember me."

Pérez-Reverte returns to Mexico, the scene of

The Queen of the South

and other texts such as the

about the historical episode known as the “sad night”

"Mexico is part of my personal geography, of my vital and literary scenarios, which include the Mediterranean Sea and the Arab world," he points out to this newspaper, and emphasizes, touching on a subject that he does not usually do, that his territory of creation, his area , is limited to those regions.

“To the Rio Grande;

on the other hand, the Far East has never caught my attention”.

Because Conrad is already there?

“I don't know, due to a certain impenetrability of the Oriental, which I find less expressive, with a resignation that is foreign to me and where in general the individual seems to matter less than the community”.

But in India there is Kipling and he can be king.

"I don't feel alluded to by India,

You will find me in a café in Istanbul, in Tangier, in Naples, there I am in my house.

I am Neapolitan, Tangerine, Mexican, Marseillais, Buenos Aires, but not Hindu.

In Bangkok, in Manila, in Bombay, in Tokyo, I don't feel part of it, I'm still a foreigner, I'm a foreigner in Asia”.

Arturo Pérez-Reverte in 1993, as a reporter for RTVE in the war in Bosnia.RTVE

“Yes, too, and all the scenarios of my wars as a journalist, Nicaragua, Salvador, Africa… I could be Congolese.

I have been to Argentina a lot, even to the Argentine Antarctica”.

In that personal geography, with the Mediterranean, that of his navigations, the sea of

As one of its great centers, Mexico stands out as another great home and destination.

“I know him well, I understand Mexico, where I am not a tourist, and the Mexican.

To Mexico, which is part of my apprenticeship, a country that helps to understand the human condition, with its cruelty and sweetness, and where I still go to learn, settling in observation posts like canteens, I love and understand it, for That is why I dare to write a Mexican novel, I am not a Spaniard who has gone to make Mexico from abroad”.

An essentially perezrevertiana novel, full of action and emotion,

and a lot of danger.

“I don't know, I write and it comes out, those details, those codes are filtered, a look emerges”, reflects the writer.

“It is a novel of friendships and loyalties, and of learning.

, from which I took the quote at the beginning.

Martin does not care about the revolution, it is not his revolution, he is not ideologically involved.

You bond with the people whose blood splashes on you."

The young Spaniard finds himself face to face with the revolution in Ciudad Juárez like Fabrizio del Dongo with Waterloo, the same curiosity;

and the events will lead him to evolve in an unexpected way, participating in the blowing up of bridges and trains, in cavalry charges with the Durango dragoons of the Northern Division, facing firing squads and ambushes, and even a duel.

Or looking for a lost gold.

What a scenario the Mexican revolution!

"It is the first of the 20th century, before the Russian one, it was a huge novelty, with the people taking up arms."

The war is described with the author's characteristic realism.

"There is a dose of personal experience, the smell, the taste of war, having lived through it helps a lot."

Martín is a dynamite player in Villista's ragged and solemn troop, a sonorous specialty sung by Miguel Hernández and sublimated in Lawrence of Arabia, the dynamite emir.

“And there is also Robert Jordan, the protagonist of

For Whom the Bell Tolls

, and my blasters from

, there is a whole iconography.

I like that figure, it interests me a lot, I have seen the trains blown up by Lawrence in the desert.

I have studied explosives manuals for the novel, I have learned about fuses.

The job was going well for me to give Martín entry into the Villista troop as an external agent, something that would justify his joining

What do they call the revolution in Mexico?

Pérez-Reverte underlines that quality of foreign to the revolutionary ideas of the protagonist.

“He is not a nihilist, and he is not romantic at all, he is technical, rational, he has no ideology, he enters the revolution out of curiosity, he is a cold observer, Pascal's looking man.

Without emotional involvement, a young man without his own imagination who will develop his vision of geometry from the experience of war and violence, will discover keys that are easier to see there than in civilized life, and will be linked by affection to the people in the whirlwind of human beings of the revolution.

He will transform and in the end, in the symbolic crossing of the Rio Grande, he will be someone with nothing to do with the one from the beginning.”

The novelist is very pleased with this very Fordian passage of history, and notes:

A fundamental element of the

is the language, full of sonorous Mexicanisms (“Píquenle, boys! Give them hell to those whores!”, “Open the fuck up or we’ll go in shooting!”, “Orita same give them leash, let them learn to don't venerate Christians”, “we're going to see him, then it's too late”, “Ujole, he's the mere mere”).

“I have worked on it a lot, reading books of the time, the Mexican speech of now is not the same as it was then and I have been careful not to put anachronisms.

The ones I use are all authentic expressions.”

Martín Garret, drunk from Mexico, has something of an

in reverse and in Spanish, a young gachupín, is there a tribute in the novel to those who traveled that terrain of the Mexican revolution, to Carlos Fuentes, to Ambrose Bierce himself , who joined Pancho Villa in 1913 and disappeared (by the way, at the age of 71, the age that Pérez-Reverte will turn in November)?

“No, as he said, things leak, readings, you can't help it, but it's not deliberate.

Pancho Villa is a luxury secondary.

“I portray it as it was, excessive in everything, it is well documented, I make up very little in general.

The battles are real, the charges with which Villa bled his cavalry in Celaya against the Obregonists were like that”.

There Villa remembers Napoleon at Waterloo, a Napoleon with a touch of throat cutting.

"He was not a tactician," highlights the writer.

Emiliano Zapata appears in the novel, but not much.

“I had to choose, and I chose Pancho Villa.

Zapata is the sad, melancholic Indian, Villa is the wild and angry north, of passions and women, the north is happier than the south of Zapata.

For the type of story I was more the Villista north, the cumbersome, spectacular revolution.

As always in Pérez-Reverte, splendid secondary characters appear in

and make up the classic cast of the adventure: the adversaries, with the “asshole Apache” Sarmiento and the officer Jacinto (!) Córdova at the head, “opponent, but one of ours”;

and the women: the selfless and moving Soldadera, the posh girl Yunuen (with that novelist's obsession with blue eyes), the American war correspondent journalist Diana Palmer... Diana Palmer! It's the name of The Man's girlfriend Masked, the Phantom of the comics!

“Yes, it's a personal nod, it was my first love, my first romantic sexual tingle;

Today only a few of us remember her, like Roberto Alcázar y Pedrín, The Warrior in the Mask, Flash Gordon or Pumby”.

Pérez-Reverte, in his seventies, observes with pessimistic realism worthy of his characters (“when this is over there will be plenty of hats”) the passage of time, and more so these sad days.

“We are falling, we are in the front line of fire, and there are more and more gaps in the ranks.”

It is easy to infer that he thinks of Javier Marías.

“We have fired him very well, with a very moving act, with many people”.

“I also really like Sigrid, who is blonde and has a bit of Milady, but Diana Palmer…”.

After the charging trumpet blasts, the revolutionary noise, the tearing of cloth from the artillery and the blowflies from the bullets, the novelist says goodbye with a sigh for his friend and the memory of old comics. 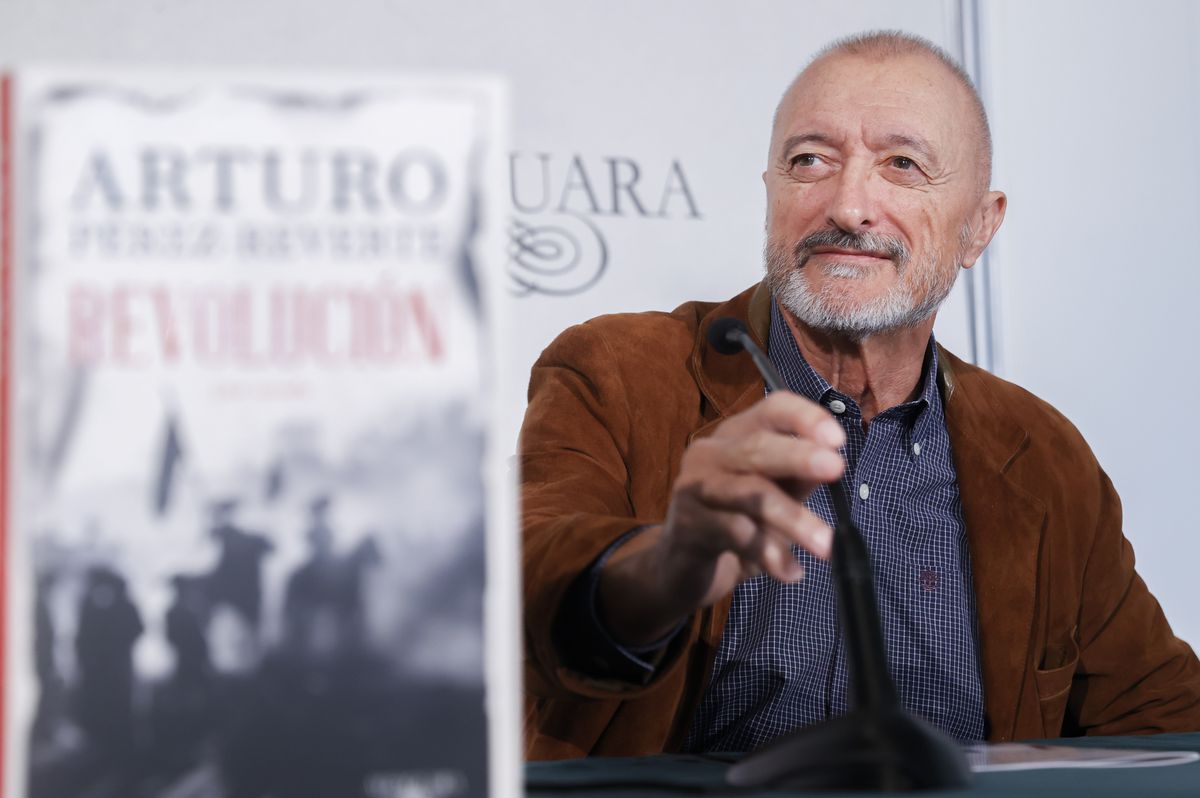 Pérez-Reverte returns to Mexico with 'Revolución', a novel of learning, friendship and loyalty in the fierce ranks of Pancho Villa 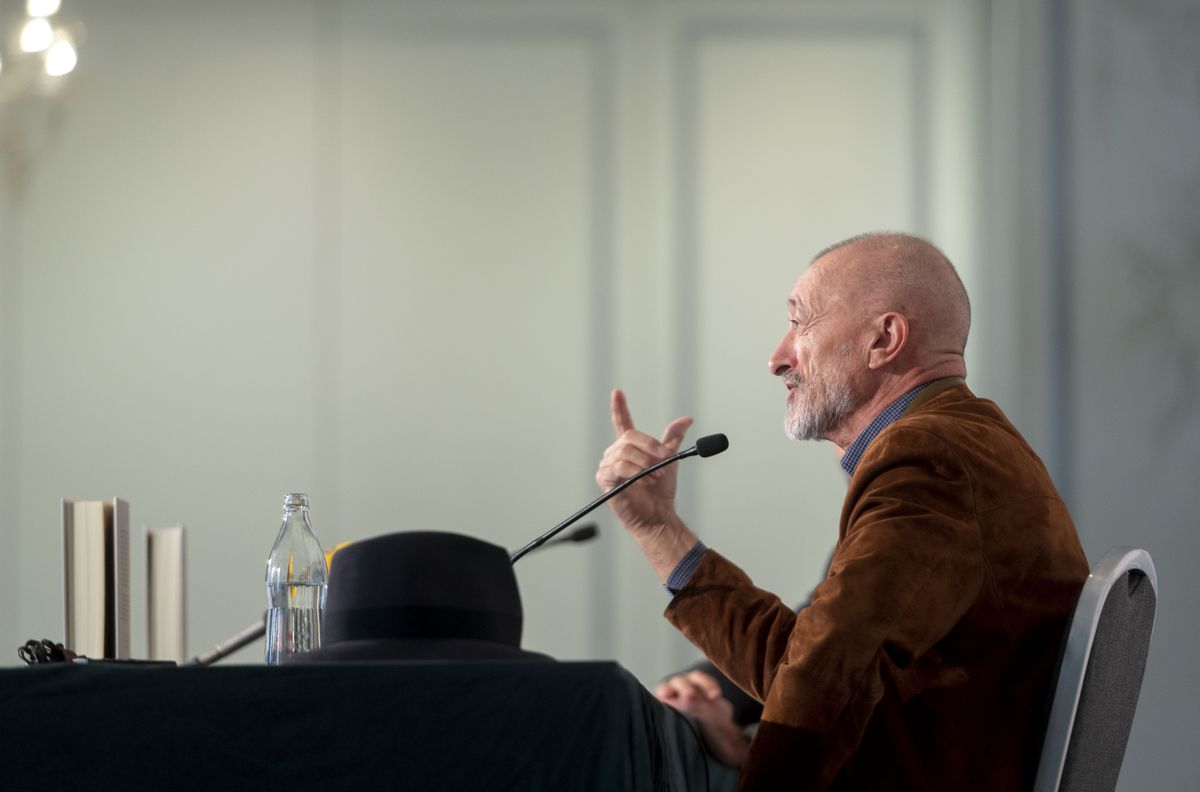 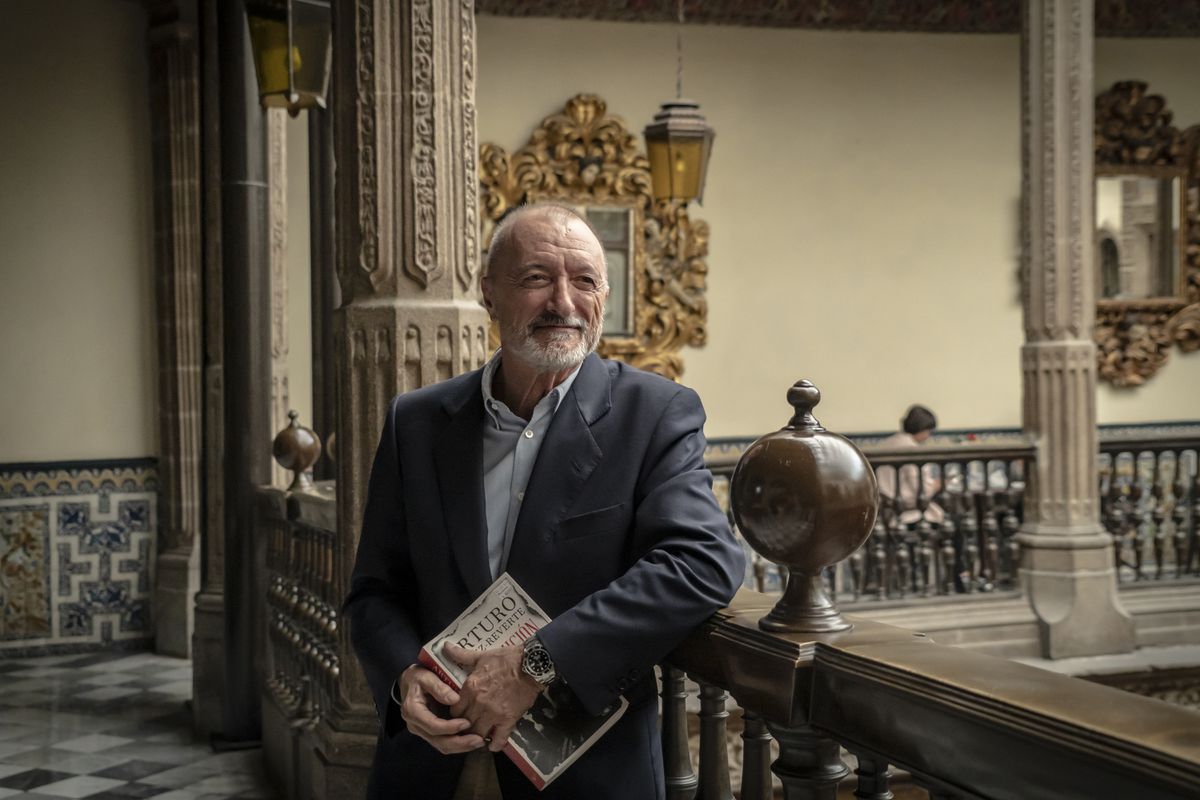 Pérez-Reverte's trip to the Mexican Revolution, round trip 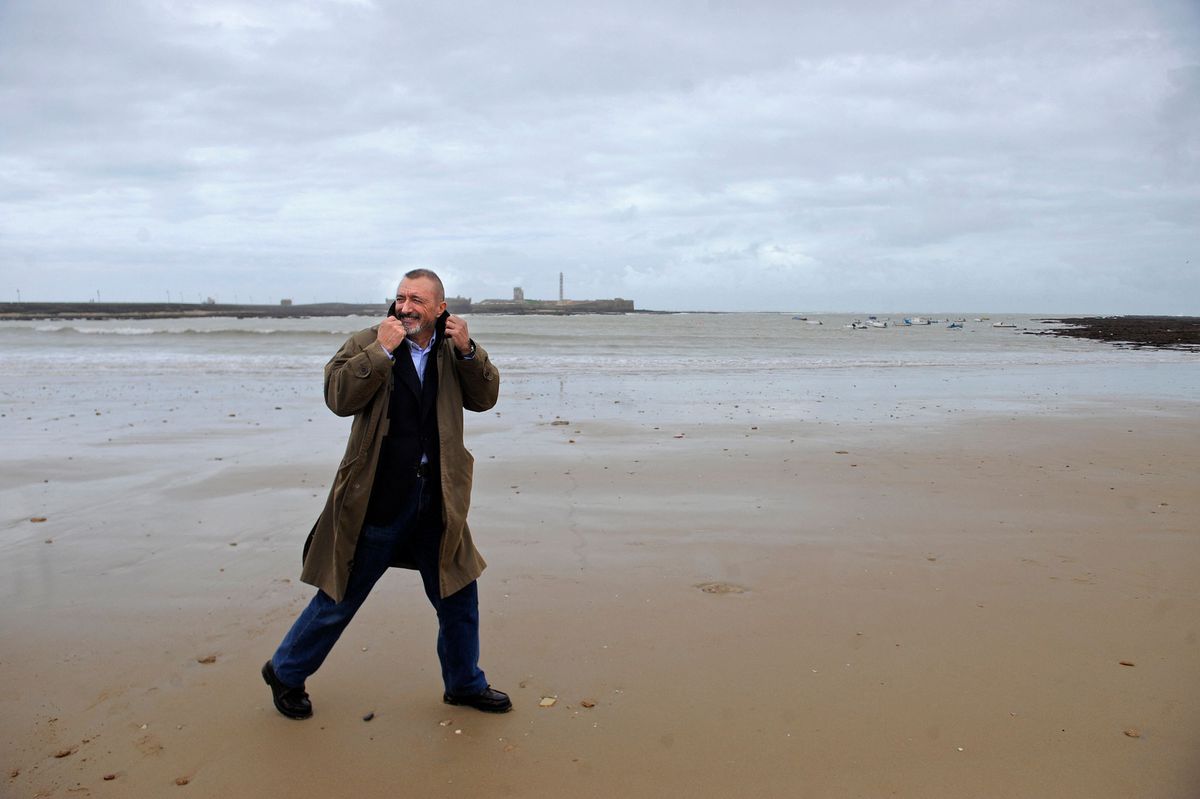 Pérez-Reverte's adventure novel, Carmen Mola's dark network of exploitation and other books of the week 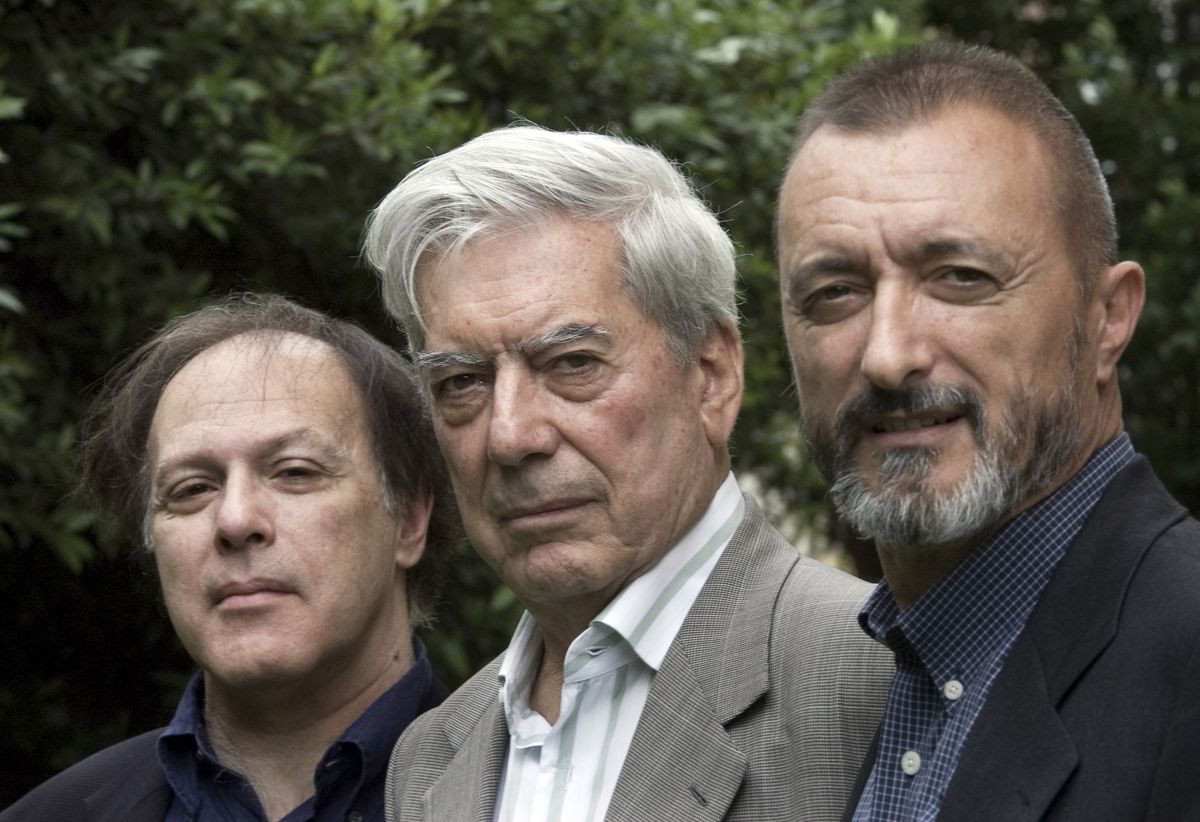 All in mourning in Redonda, the king has died 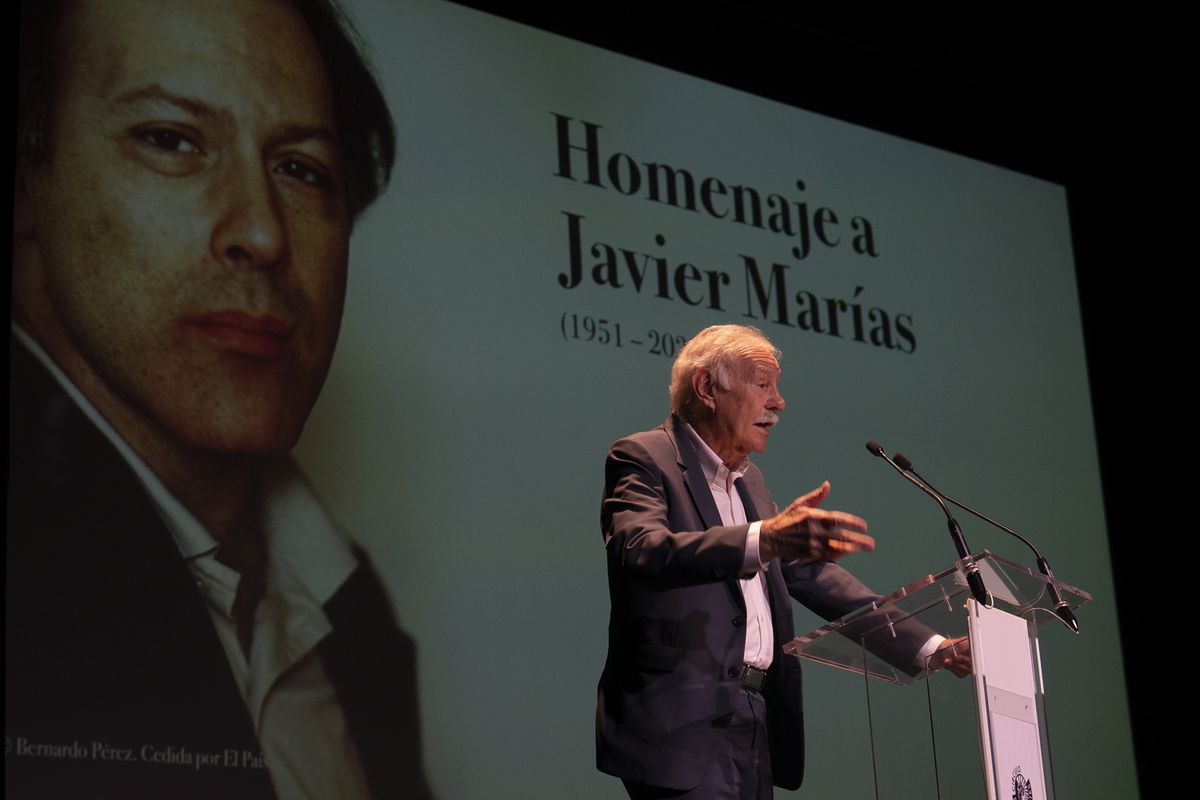 Tribute to Javier Marías: "We knew he was going to be an important writer, what we didn't think was that he would be king" 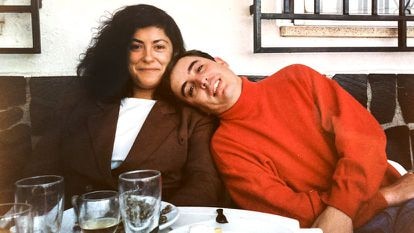 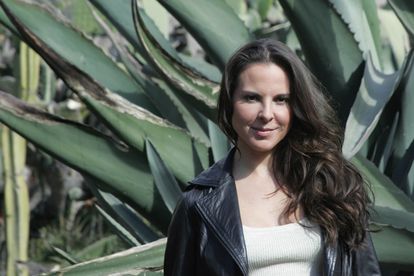