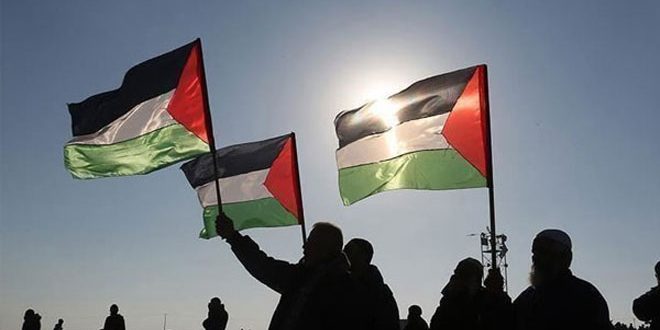 A broad Palestinian rejection of the Israeli colonial occupation plans to annex parts of the West Bank and an affirmation of adherence to land, rights and resistance until the end of the occupation and the establishment of an independent Palestinian state with Jerusalem as its capital, while calling on the international community to take practical steps to stop the crimes of the occupation.

The National Center for the Defense of the Earth and Resistance to Settlement of the Palestine Liberation Organization confirmed that the occupation authorities have accelerated the pace of implementing their settlement plans since the American administration announced on the twenty-eighth of last January items of the so-called "deal of the century", especially in occupied Jerusalem, Jericho, Ramallah and Al-Aghwar to change the facts on the land Dedicating the occupation, noting that the Prime Minister of Benjamin Netanyahu's appointment of the first of July next as the date for starting the implementation of the annexation plans came to an agreement between the occupation and American officials to implement the provisions of the "deal of the century" that violate the legal legitimacy. Mechanism related to the Palestinian cause and the rights of the Palestinian people in an attempt to legislate bullying policy and the laws of the jungle, which became US president in the era of Donald Trump is a key component of the foreign policy of the United States components.

Palestinian Prime Minister Muhammad Shtayyeh renewed the occupation’s plans, stressing that annexing Palestinian lands and his attempt to isolate occupied Jerusalem from the rest of the West Bank and continue its blockade of the Gaza Strip is a violation of international law that undermines any opportunity to establish an independent Palestinian state on the borders of June 4, 1967 with Jerusalem as its capital indicating that the international position Rejection of annexation and the "deal of the century" constitutes support for the Palestinians, but the statements of condemnation and condemnation are insufficient and the international community must shoulder its responsibilities, stop implementing settlement settlement plans and provide international protection for the Palestinian people under occupation.

The head of the Wall Resistance and Settlement Authority, Walid Assaf, stated in a statement to a SANA correspondent that the occupation began, since the beginning of this year, the implementation of the annexation plans by seizing large areas of Palestinian lands to expand settlements, noting that the occupation is working to limit the Palestinian presence in the occupied West Bank to cities and towns isolated from Some of them are surrounded by settlements, undermining any opportunity to establish an independent Palestinian state.

Assaf pointed out that the occupation’s implementation of the annexation plans threatens to displace 155 Palestinian towns, 46 of which are in Jerusalem, Jericho and Ramallah. “This means a new catastrophe” resulting in the displacement of tens of thousands of Palestinians from their homes and lands in a new ethnic cleansing crime that the international community must confront and prevent the occupation from implementing. .

The Secretary-General of the Palestinian People’s Party, Bassam Al-Salhi, indicated that the American bias towards the occupation entity encourages him to implement his colonial settlement plans and escalate his crimes against the Palestinians, stating that the international community, especially the United Nations, and despite his rejection of annexation, does not resort to taking actual measures to stop it and the crimes of the occupation, which is something that exploits it. The occupation authorities, with Washington's support, to take away the rights of the Palestinian people.

Al-Salihi called on the international community to hold the occupation officials in international judicial institutions accountable for their crimes against the Palestinian people.

For his part, Mahmoud Khalaf, a member of the Central Committee of the Democratic Front for the Liberation of Palestine, stressed the need to stop all forms of normalization with the occupation by some Arab regimes and support the Palestinian people's resistance to drop all conspiracies aimed at liquidating the Palestinian cause. 800 new settlement units threaten to separate cities and towns from each other, in implementation of the (Deal of the Century) 73 years and the plight of the Palestinian people continues National Office for Land Defense: The occupation continues to expand settlement operations to undermine any opportunity for the establishment of a Palestinian state