For the first time since his accident Sunday at the Bahrain GP, ​​which could have cost him his life, Romain Grosjean spoke on TF1's television news on Tuesday. He first gave news of his state of health on social networks.

He developed a little longer on Tuesday, in an interview with TF1, two days after his terrible accident on Sunday during the Bahrain Grand Prix.

Still hospitalized, the French pilot first showed the camera his bandaged hands to treat his 2nd degree burns on the backs of his hands: “I have Mickey's hands but otherwise, that's fine given the accident and the circumstances, he smiled.

The movements are fine, it's not pleasant but it's not painful, I'm not complaining.

It's superficial, I have mobility in all fingers.

After this accident, I am happy to be alive ”.

- Formula 1: the suit and the helmet, the exceptional anti-fire armor

After his terrible accident, Grosjean was taken by helicopter Sunday evening to the hospital of the armed forces of Bahrain.

A few minutes after the start of the race, his car had collided with that of Russian Daniil Kvyat before hitting a safety rail and his car had split in two before bursting into flames: “Even in Hollywood, we are not able to do that.

I have never seen a crash like this in my life.

The car caught fire, the battery too.

I do not know if the word miracle exists but in any case it was not my time.

I did not lose consciousness.

I stayed 28 seconds in the flames but it seemed much longer, as I tried three times to get out of the bucket.

I was able to remove my seat belt, the steering wheel was no longer there, probably flew off during the impact.

I saw my all orange visor, the flames on the left side of the car, and Niki Lauda's accident occurred to me (note: Austrian champion disfigured by flames after an accident at the Grand Prix d 'Germany in 1976), I didn't want to end up like that.

I clearly felt that my hands were burning on the frame.

Then I felt someone pull on my suit so I knew I was outside.

In the end, my hands are burnt and a big sprain, whereas I thought I had broken my foot. ”

"My five year old son said I had magical power, a magical love shield that protected me"

In the name of his family above all: “For my children, I had to go out.

I was more afraid for my relatives, my three children in the first place, but also my father and my mother, I was not really afraid for myself.

My five year old son said I had magical power, a magical love shield that protected me.

These are strong words.

The youngest drew me a drawing.

There's going to be a bit of psychological work because I saw death happen. ”

The 34-year-old driver will leave the hospital just 48 hours after his terrible crash, but he will not take the wheel next weekend, replaced for the second GP on the Sakhir circuit by the Brazilian Pietro Fittipaldi.

However, he confirms his presence at the last Grand Prix of the season, on December 13 in Abu Dhabi, before leaving the F1 circuits: “I am happy to be alive.

I want to see it differently and I feel the need to get back in the car in Abu Dhabi so that I don't end up like this.

The Romain Grosjean before would never have said that but, if I do Abu Dhabi, I will be happy even if I finish 20th.

I will be marked for life by this accident. ”

How the Halo, protection criticized in its infancy, saved the life of Romain Grosjean

As early as Sunday evening, Grosjean had given reassuring news.

He also spoke of the importance of the Halo, a protective arch that saved his life.

The former Lotus rider concluded his interview with a thought for Jules Bianchi, who died on July 17, 2015 following his accident in 2014 during the Japanese Grand Prix: “Without the halo, I would no longer be there.

I think Jules didn't want me up there. ” 3 months after his accident in F1, Romain Grosjean takes the wheel

"This gentleman saved me": Romain Grosjean in search of the firefighter present during his crash 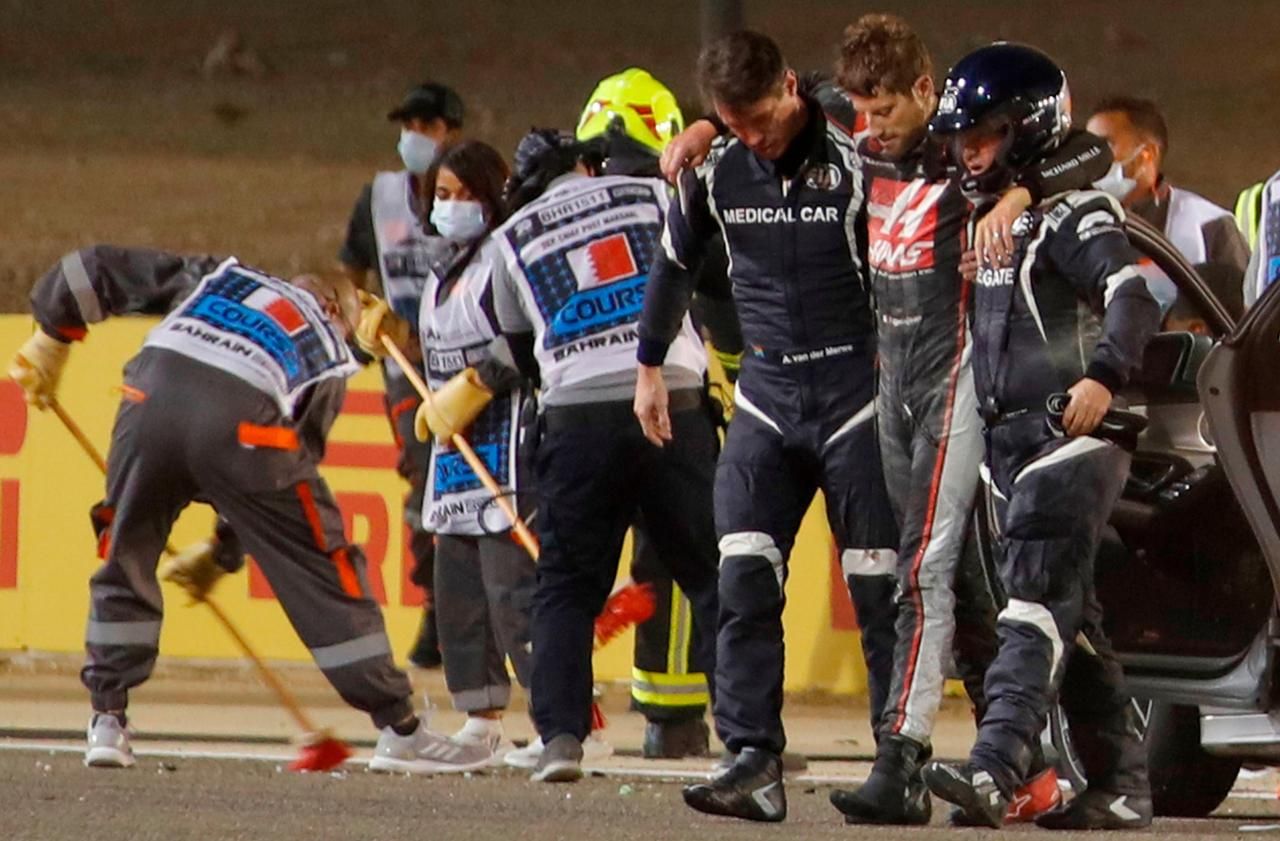