Stretched over three departments -Doubs, Jura and Ain-, the Jura relief offers a unique geography, made up of valleys and wild forests. A natural boulevard for Nordic activities and even more for cross-country skiing, a true local religion which is expressed on more than 3000 km of slopes. 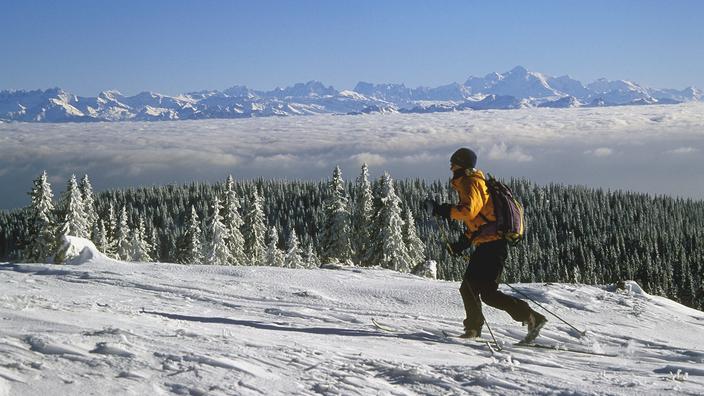 The snow has gripped the mountain with a polar white cold.

Motionless, in an interlacing of white pines and frosted by a greedy winter, a cross-country skier.

Spatulas in the track, sticks under his arms, he crosses the plain of Jura to disappear silently in the immensity of a forest resembling a taiga.

We imagine it sliding towards another valley which borders the next village.

The image is soft.

It invites to travel.

She speaks in her silences all the singularity of the reliefs of the Jura, this territory which seems so different from the sometimes too big and high mountain that we sell in the tourist brochures.

The Jura massif draws its identity from these differences.

The Jura offers a gentle geography suitable for Nordic activities.

Another element makes up the seasonal DNA of these reliefs which stretch for nearly 340 kilometers in a large arc across three departments, Ain, Jura and Doubs: Nordic skiing.

A quasi-religion in these cold lands.

On Sundays in the Jura mountains, the churches are empty, the slopes full”,

traces with a touch of humor Vincent Defrasne, Olympic biathlon champion in 2006, and native of Pontarlier (Doubs).

We have been skiing in the Jura mountains since the end of the 19th century.

It was originally to facilitate the movement of schoolchildren, postman, peasants from one village to another.

A true art of living which has remained so, even if pleasure has replaced the useful in the heart of a relief of ridges and plateaus cut out for Nordic activities (cross-country skiing, snowshoeing, Nordic ski touring, etc.).

“In the Jura mountains, we have a geography suitable for skiing and we have produced a lot of champions

Nordic activity is anchored in the territory.

We travel from one village to another on skis.

We don't have the feeling, here, of being in an artificial landscape.

The 1970s transformed the practice.

Recreational, it has become touristy.

“Each village had its own tracks, we linked them

The idea was to set up a unique network in France.

More than 3000 km of groomed and signposted Nordic ski slopes are now suitable for skating or alternative (in the tracks), accessible to all levels and divided between 21 areas.

All this has built the reputation of the Jura massif"

Read also: Full view in the snows of the Jura

In 1979, the birth of the Tranjsurassienne, "Transju" for the intimate, one of the most famous long-distance cross-country skiing event in Europe, which brings together more than 4000 skiers every year in February, gave a little more thickness to the myth

"Everyone comes to find in these large spaces a preserved natural setting, equipment adapted to the practice of Nordic activities, sports as well as fun, but also atmospheres and traditions reminiscent of the Far North or Scandinavia", we

Read also: Oslo, the city where you go to ski by metro

“believed in the Nordic”,

Snowshoe trails and cross-country skiing trails coexist in most areas.

(less than 1,200 inhabitants) has become, with the Tuffes stadium, which will host a cross-country skiing World Cup stage in 2021, the national training center for French teams.

, a village of 800 souls in the Doubs, was equipped with a ski jumping hill regularly used for stages of the Nordic combined World Cup.

Up to 10,000 people congregate on those days at the foot of the springboard.

The Nordic is part of the local culture and continues to support families.

To ensure additional income, peasants from the Jura used to work in the manufacture of sports equipment.

While some families have ceased their activity, this is not the case for all.

Everything here brings the visitor back, for a moment, to this discipline.

Read the file: Skiing: the

Where to go cross-country skiing in the Jura?

Les Rousses, crossing point of the Grande-Traversée-du-Jura, has more than 180 km of slopes.

Its 6 green runs make it accessible to all levels.

Standing at the foot of the Dôle (1678 m), to the south of the “Jura Mountains” (tourist name given to the territorial entity of the massif), the resort of Les Rousses, made up of four villages (Bois-d'Amont, les Rousses , Prémanon, Lamoura) is one of the most famous French Nordic ski areas.

There are many possibilities on the 200 km of slopes: the area is linked to those of Hautes-Combes, Bellefontaine or even French-speaking Switzerland ...

Lakes and mountains of Haut Doubs

The “Lakes and Mountains” territory of Haut-Doubs is one of the largest Nordic areas in France with more than 500 km of groomed and signposted cross-country ski trails between the villages of Métabief, to the north, and the Chapelle des Wood, to the south.

Thanks to the Grande Traversée du Jura (GTJ), the skier will be able to navigate from one village to another without taking off their shoes.

The slopes offer remarkable views of the geographical riches of the massif with splendid views of the Mont-d'Or (highest point of the Doubs with its 1463 m), the snow-capped valleys of Mouthe (the coldest village in France) or the shores of Lake Saint-Point, the third largest natural lake in France after those of Bourget (Savoie) and Annecy (Haute-Savoie).

Read also: 10 hotels to enjoy cross-country skiing or snowshoeing in the Jura and the Vosges.

The domain of Gounefay, one of the three accessible in a few minutes from the city center of Pontarlier.

Perched at an altitude of 850 m in the north of the massif, Pontarlier (22,000 inhabitants in the agglomeration) embodies the “city in the mountains”.

Where to hike with snowshoes?

The area offers 50 km of marked and secure trails.

Nestled in the heart of the Haute Chaîne du Jura national nature reserve, in the south of the massif, La Vattay is one of the most beautiful areas in France with its panoramas of Lake Geneva, Mont-Blanc and the Jura plateau.

Renowned for its cross-country ski trails, it also offers 50 km of marked and secure trails for snowshoeing.

Local guides offer accessible thematic walks to get off the beaten track and discover the riches of the region.

How to get to the Jura massif?

The Jura mountains stretch over 350 km in length and spread their massif, from the Ain, at the gates of Lyon, to Montbéliard, via the Jura and the Doubs.

Located near Switzerland and major highways, the Jura massif is easily accessible.

Allow three hours for the journey from Paris

: Geneva (Switzerland) and Lyon - Saint-Exupéry are the two closest airports to the massif and the best served.

The Jura Mountains weekly pass provides access to all Nordic cross-country skiing and snowshoeing routes as well as to certain sites in French-speaking Switzerland.

There is a second weekly pass which only gives access to marked and secure snowshoe-pedestrian areas.

Last weekend before confinement? How to enjoy the snow 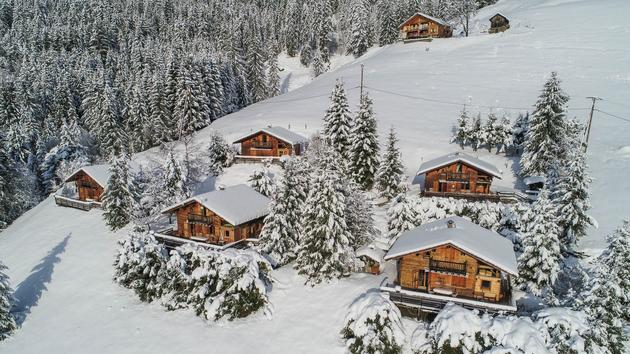 How to enjoy winter 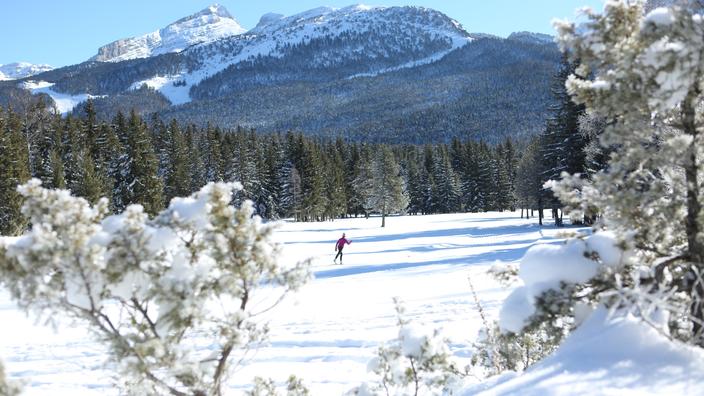 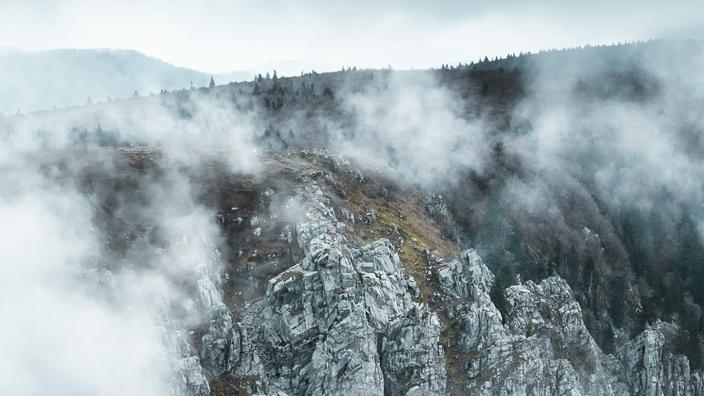 Nights in a hotel, forest baths and spa: Scandinavian-style weekend in the Vosges 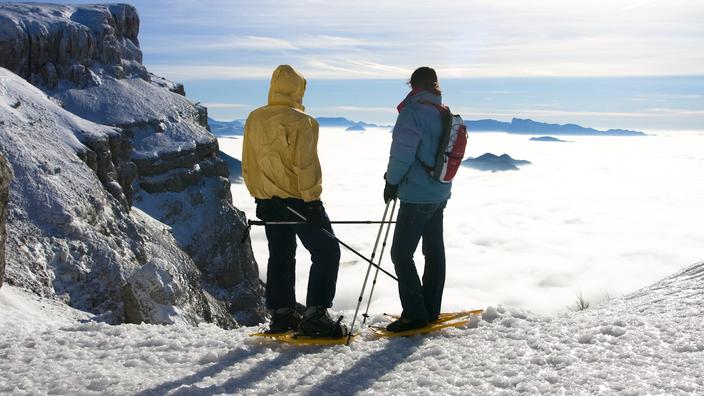 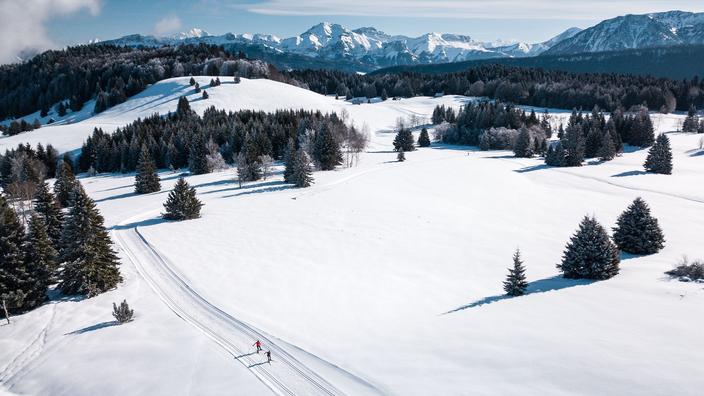 Cross-country skiing, snowshoeing ... in the mountains, the rise of Nordic activities