Sergio Massa: "An amnesty for corruption cases would be a big mistake"

The president of the Chamber of Deputies of Argentina maintains that the mission of the Government for 2021 is "to grow, vaccinate and unite" 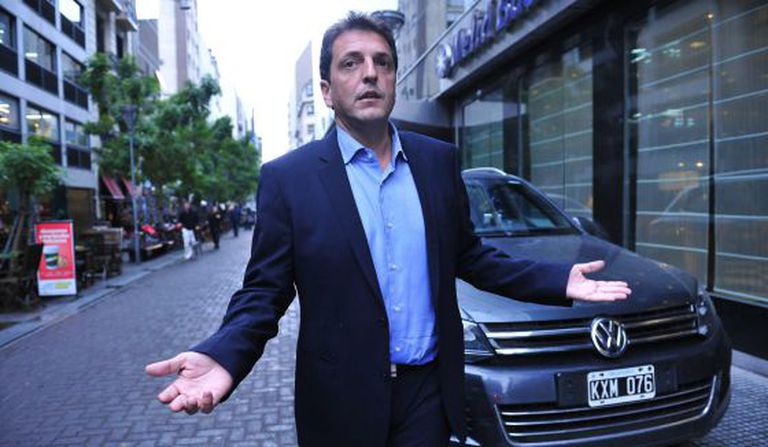 Sergio Massa (San Martín, Buenos Aires, 1972) is president of the Chamber of Deputies and one of the mainstays of the Peronist coalition that governs Argentina.

During an interview conducted in one of the congress rooms, Massa affirmed that an amnesty for those accused of corruption, such as the vice president and former president Cristina Fernández de Kirchner, would be "a great mistake."

And he considers that the mission of President Alberto Fernández for this year can be summarized in three words: "Grow, vaccinate and unite."

The pandemic has greatly complicated the return of Peronism to power.

We have faced the storm.

Other countries were able to take credit for battling the pandemic.

We inherit a country in default.

Not only were we unable to borrow, but we had to renegotiate a debt restructuring with private creditors.

Despite this, we expanded public spending to assist almost three million workers, almost 40% of the formal workforce, with the Work and Production Assistance Program, and we were able to reach households with greater difficulty with a food card and Family Emergency Income.

Almost 40% of the Argentine population lives in poverty.

That was left to us by the previous government of Mauricio Macri.

Even so, we were also able to improve the lower pensions.

Did you see the inauguration of President Joe Biden?

I saw something on television.

Biden's triumph opens up expectations for Latin America and offers Argentina the opportunity to rediscover its relationship with the United States.

It also puts the fight against climate change back on the international agenda.

A while ago I was talking to the navigation unions, we foresee three years in which the waterway [Río de la Plata and Paraná] will have little flow due to the deforestation of the Amazon and changes in the rainfall regime.

Will Biden help in the renegotiation of Argentina's debt with the International Monetary Fund?

Argentina has a very clear position there.

The Fund decided to violate its own statute to support Macri as a candidate for reelection, this was recognized by a senior IMF official.

Despite this, Argentina has a vocation to order its relationship with the IMF.

But there are two things that this government is not going to allow: an adjustment imposed on it and an economic program imposed on it.

We want to pay thanks to the growth achieved with a program developed in Argentina.

And what does the IMF say about all this?

In that sense, European countries like Spain and France have backed Argentina.

I am confident that we will reach an agreement on the debt within this semester.

And I am convinced that economic growth will allow us to close a good deal.

The government believes in fiscal equilibrium, in a trade surplus, in a competitive exchange rate, in the accumulation of reserves and in debt reduction.

But all this has to be accompanied by growth with inclusion and job creation, to break poverty.

The weight is in the last.

The more we export and the healthier the trade balance, the stronger the currency.

Argentina works on a bimonetary basis [peso and dollar] because we cannot accumulate reserves in the Central Bank.

interpret that exchange controls, what they call “stocks”, will continue indefinitely.

Chile and Brazil also have controls.

The more we export, the more we can relax the restrictions.

Let me go back to Biden, because when it comes to Venezuela the new president of the United States has ideas very similar to those of Trump.

There our coalition gathers different views.

I have maintained for years that the Venezuelan government does not meet the minimum democratic guidelines.

And the president has also been clear in his support for the Bachelet Report [which denounces serious violations of rights of all kinds in Venezuela].

But they send a representative to all the official ceremonies in Caracas.

The courteous does not take away the brave.

What happens to Peronism with the field?

They have been fighting with the agricultural sector since the time of Juan Domingo Perón.

The field is one of the engines of the Argentine economy.

To get ahead we need Vaca Muerta [the great Patagonian hydrocarbon deposit] and “vaca viva”.

Vaca Muerta can allow us to be self-sufficient in energy matters and export gas and oil.

We have been hearing for years about the great future of Vaca Muerta.

But next winter Argentina will import gas again.

The Gas Plan, launched by the government, will accelerate the development of Vaca Muerta.

And then there is "live cow."

We have to reach an agreement with the Agroindustrial Council, which includes not only growers, but also representatives of sectors such as agricultural machinery or biotechnology, in which Argentina is competitive worldwide.

What we have to do is sell the world the proteins it demands.

The problem is that this demand raises prices and this country has suffered in recent years a tremendous loss of purchasing power: high demand does not mean that Argentines cannot access the food they produce.

In any case, we must not confront the field, nor the knowledge economy, nor competitive sectors such as the automotive industry, mining, tourism or construction.

We have a public works program with an investment of 1.2 trillion pesos (about 6,000 million dollars) that will generate growth and employment.

Where does that money come from?

The renegotiation of the debt makes the expected maturities for this year disappear from the budget.

This allows you to take advantage of the resources to grow.

Going back to the countryside, President Alberto Fernández had to back down on the expropriation of the Vicentin agro-export group and the temporary ban on the export of corn.

The president has the humility to admit his mistakes.

It is a merit.

As soon as he assumed the presidency, Fernández launched a justice reform as a priority.

Why such a priority?

Because she had committed herself in the electoral campaign, as well as in issues such as the voluntary interruption of pregnancy.

But the project has been in Parliament for a year.

The cameras are independent and it is worth taking the time to discuss.

And less with a project that arouses suspicions.

The opposition says that the reform aims to improve the procedural situation of Vice President Cristina Fernández de Kirchner.

As it is intended to install suspicion, it is better to allow time for debate.

The president said that he was not going to pardon the Peronist leaders convicted of corruption, as claimed by some sectors of the coalition, but he suggested that Parliament could approve an amnesty.

I do not see the slightest possibility.

Justice is the one who acquits or condemns.

An amnesty for corruption cases would be absurd, a big mistake.

Your political base is the province of Buenos Aires, which some consider unfeasible due to its size, its economic weight and its problems.

The important thing is that it is well governed.

I have had and have many political differences with the current governor, Axel Kicillof, but I think he is doing a good job.

If we do not resolve this asymmetry, the richest province ends up being the poorest.

Because in terms of population in vulnerable situations, Buenos Aires is one of the provinces with the most problems.

Finally, who's the boss?

Send the president, do not hesitate.

You were the Chief of Staff of President Cristina Fernández de Kirchner, now vice president and president of the other chamber, the Senate.

Years ago they broke up and spoke very harsh words. How is your relationship now?

Of respect and coordinated work.

Have you ever talked about the past?

And what have they said?