The Narcotics Control Branch in Damascus countryside arrested ten people in the Sayeda Zeinab area who used to trade, promote and abuse drugs, and confiscated a kilo and 250 grams of hashish, and more than one thousand and 72 Captagon pills.

And the Ministry of Interior stated in a statement that SANA received a copy of that, based on the information received by the Narcotics Control Branch in the Damascus countryside, about the presence of several people in the Sayeda Zeinab area of ​​the Shamalna camp, carrying out trade, promotion, and drug abuse, and stirring terror and terror to the neighborhood's residents, and by monitoring, monitoring and ambushing them, ten people were arrested and confiscated. A kilo and 250 grams of narcotic hashish and one thousand and 72 pills of narcotic Captagon from them and from the house of one of them military ammunition, war equipment and hand grenades, in addition to the possession of one of them a military pistol.

The ministry indicated that investigations are underway with those arrested to uncover the rest of those involved, and they will be brought to the competent court when the investigation is duly completed. &nbsp;Four people were arrested from drug dealers and abusers in Damascus countryside Arresting a wanted person in the Damascus countryside against more than a dozen radio stations researching drug crimes, and a court ruling for 15 years Arresting a drug dealer and promoter in Douma, Damascus countryside 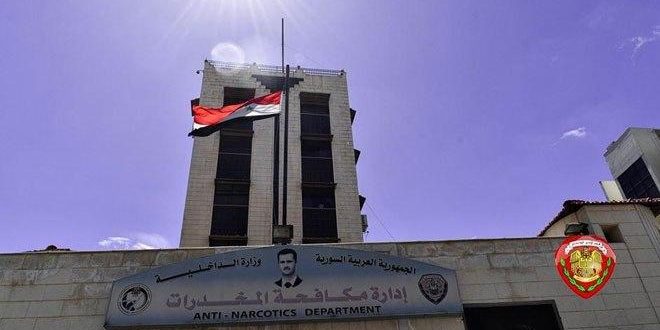 The arrest of a drug dealer in Damascus countryside and the confiscation of quantities of hashish, heroin and cocaine