The Export Committee of the Federation of Syrian Chambers of Industry: The need to take measures to support exporters and increase national production The Central Export Committee of the Federation of Syrian Chambers of Industry called for a set of measures to be taken with the aim of supporting exporters and creating support mechanisms according to each sector, with the aim of increasing the production capacity of the national product in various industrial and agricultural sectors.

Luay Nahlawi, Chairman of the Committee, stated in a statement to the SANA Economic Bulletin the importance of activating export subsidies for a year and disbursing the value of the subsidy in cash 15 days after exporting and creating a new support mechanism at variable rates for each sector according to the conditions and external competitiveness, whether for the agricultural or industrial product, provided that the mechanism is reviewed every Three months in addition to providing facilities regarding export procedures to Iraq by reducing fees imposed on Syrian goods imported to Iraq, activating the accreditation of the Syrian Standards and Metrology Authority on the Iraqi side, opening the agricultural calendar to activate exports to Jordan and supporting the Made in Syria specialized exhibition for clothing and textile export by increasing the number Visitors from abroad to ensure the success of this exhibition, especially as the exhibition is intended for export.

In turn, Abd al-Kafi al-Masum, Vice-Chairman of the Committee, indicated in a similar statement to the positive impact regarding subsidizing exports by 10 percent for industrialists in cooperation with the Local Production and Export Support Authority and extending it for another new year after working on it from the 15th of last June until three months, noting the competitive reputation of the Syrian product. Especially in neighboring countries for ease of delivery and price competitiveness, especially after the opening of the land crossing between Syria and Iraq, stressing that the issue of encouraging and supporting exports has positive repercussions on increasing production capacity, as production capacity does not exceed 25 percent in the current situation, as the external market supports the internal market and creates competition among producers.

For his part, Thaer Fayyad, Director General of the Local Production Development and Export Support Authority, affirmed that the authority is constantly working to encourage local production and increase its competitiveness in foreign markets through the permanent support programs it provides, such as support for insurance, income tax and electricity, while 10 percent of the value of industrial exports has been approved during the extended period. Between 6-15 and 9-15 of last year for total exports, and not exceeding $ 30,000 at the official price, as a support for the industrialists affected by the circumstances of the Corona pandemic, indicating that industrial exports during that period witnessed a noticeable increase in various local industrial products, which reflected positively on the development of Domestic product and increase it.

The Central Export Committee of the Federation of Syrian Chambers of Industry held its first meeting this year at the Homs Chamber of Industry headquarters.

The Export Committee of the Federation of Syrian Chambers of Industry: The need to take measures to support exporters and increase national production 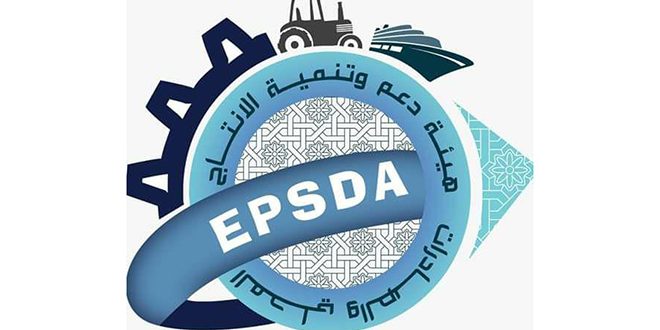 With the participation of 340 national companies ... The specialized export exhibition for clothing and textiles tomorrow Its activities were concluded ... hundreds of agreements and contracts are the outcome of the Made in Syria export exhibition