The army raided her home in the capital and located walkie-talkies that he claimed were illegally imported. Her voice has not been heard since the coup two days ago

The army raided her home in the capital and located walkie-talkies that he claimed were illegally imported.

In the video: The army tightens its grip on Myanmar after the coup (Photo: Reuters)

Myanmar police today (Wednesday) filed charges against ousted leader Aung San Suu Kyi for illegal importation of communications equipment and will remain in custody until February 15 for her investigation, according to a police document.

Myanmar's army took control of the country in a coup on Monday, arrested the bride of the Nobel Peace Prize and cut off the country's democratization process.

At the request of the police to the court, the charges against the 75-year-old Su Chi, who had walkie-talkies at her home in the capital, were detailed.

Her whereabouts are unknown, but she is apparently being held in a dormitory.

Her voice has not been heard since she was ousted from power on Monday morning.

The commander of the Myanmar army is nearing the end of his journey.

A coup was his last resort

The junta in Myanmar has imposed a curfew in major cities, threatening to crack down on protesters - Walla! news

Tens of thousands demonstrated in Myanmar against the coup: "Democracy will win" - Walla! news

Massacre in Myanmar: At least 18 killed in demonstrations against the junta - Walla! news 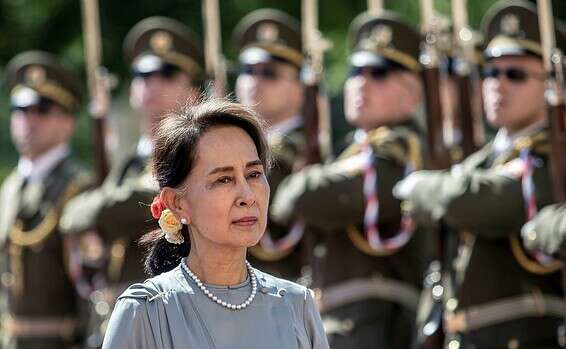 Myanmar Army sends tanks to the streets, US calls on its citizens to hide - Walla! News