| Jewish culture Religious finalist from "Race for a Million" wrote a post against a tenant in the Big Brother house • Some surfers did not like the review: "It is better to go naked than to play it sacred" Gal Gvaram at the Big Brother house Photography:  From the Big Brother show "I do not know what makes a 19 - year - old girl talk all day about sexuality," Karin Kleinberg opened the post she posted to her 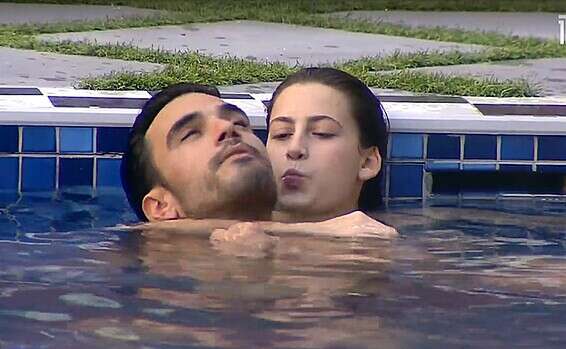 Religious finalist from "Race for a Million" wrote a post against a tenant in the Big Brother house • Some surfers did not like the review: "It is better to go naked than to play it sacred"

"I do not know what makes a 19 - year - old girl talk all day about sexuality," Karin Kleinberg opened the post she posted to her Instagram this week, in which she criticized Gal Gvaram's conduct at the Big Brother house.

"Maybe it's really from where she wants to be seen as 'mature' or maybe it's from the place of 'no boundaries', but then the discourse becomes 'your boundary is not her boundary'."

"Look," wrote Kleinberg, a graduate of the Race for a Million reality show, where she qualified for the finals with her husband Ariel, "Regardless of the fact that I am religious, I believe as a woman that there are things called 'intimate moments' from this place that I should not know, Moments you share with your man, moments full of love and respect called: 'marriage' and if you want it to be more meaningful then 'make love'.

"No! No woman should wave at her sex peaks in front of the whole world and his wife as if she just came out of a movie on Netflix (and of course the male sex) 'Oh God,'" she wrote.

"Talking about sexuality all day does not make you an adult and unfortunately also hurts your respect for yourself, because yes. There are things that need to stay yours with yourself and your partner and even more so when you are in prime time.

"Dear girl," Kleinberg (23) addressed directly to Gvaram (19), "if you read this post you will know that talking about sex all day without any basic respect for intimate moments does not make you an adult but tactless and disrespectful. I wish such moments are not "There will be inspiration for girls and young women who see" Big Brother "because that's not how women behave. That's how no one should behave men and women," Kleinberg concluded.

The post received more than a thousand likes, but among the dozens of responses it garnered and expressed support for Kleinberg's remarks, there were also quite a few who saw them as a point of defect and even hinted at hypocrisy on Kleinberg's part.

"The main thing is a head covering, then slogans about slander.

To deal with her husband and her family.

It is better to go naked than to play it sacred.

It was said that you were immersed and crawled in her hand, "wrote one of the surfers. Another was furious and claimed that it was shaming." It is a pity that you write this from a place of criticism without mentioning her name and giving room for bullying, especially when she can not respond me.

"To do 'shaming' on a girl who is a total of 19. You did not say the name because that way you might come out well, but in her choice. Big brother will decide what to broadcast and what less."

"Walla has something in it but she's not obscure. She knows what she's saying. But soul, you're also talking about sexuality and intimacy that there are children following you. Where is the modesty here? Where is the room here? Like you do not want to be judged and written about you so do not To others. "

"You wrote well, but there is a big but, writing it about a person who can not answer you and respond to you is a mistake! Everyone focuses on the fact that Gal says things about it because that's what they chose to broadcast, but Linor's conversations about it decide to disappear from the field. It is not right to direct the fire to one person when there are others in the house who are not ashamed to talk about it. "

"The problem in society is precisely women like you," concluded an angry surfer.

"We are in a society that still crucifies a woman for an act she does or a word she says. You are just proof that you should hide and be ashamed only because women want to talk about what is fun and good for them to do, and also talk about sex is fun and exciting and there is no reason to censor it. If each one feels uncomfortable talking or doing as she pleases without being judged just because she is a girl or for that matter just because he is a boy, where we as a society give real place to liberalism for real respect for each other without judging, and we will not have to be with a filter all the time but just who "In my eyes, to take the stage where there is power and use it for such reactions in public, to call a 19-year-old girl disrespectful in the eyes of all, it is disrespectful and tactless. Do your mental arithmetic with yourself."

Lior Kalfon was attacked at the exit from "Big Brother": "People should be ashamed" - Walla! Celebs

The case of the modeling agent: The number of complaints filed with the police against Shai Avital has risen to 10 - Walla! news