New Crown Vaccine | Disassemble the protection rate and side effects of three vaccines for Hong Kong. Is Kexing suitable for this group?

The Hong Kong government has ordered three new coronary pneumonia vaccines, namely Fosun/BioNTech, AstraZeneca, and Kexing vaccines, all of which use different technologies. Among them, Fosun and the German pharmaceutical company BioNTech have been approved 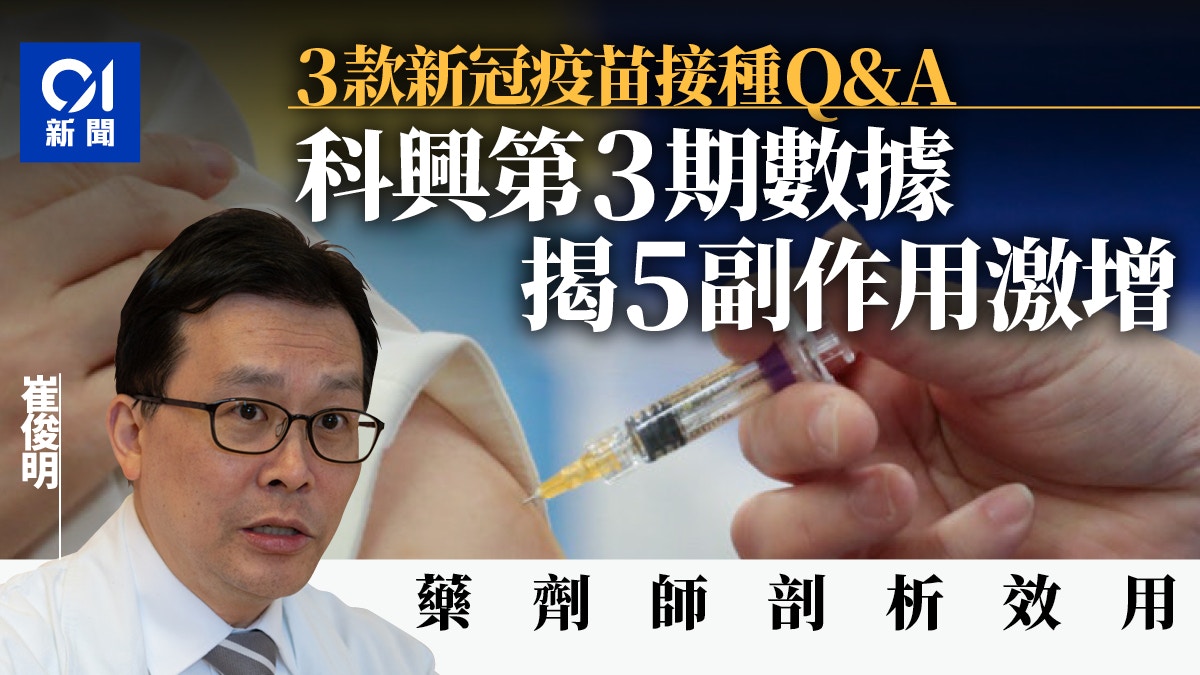 The Hong Kong government has ordered three new coronary pneumonia vaccines, namely Fosun/BioNTech, AstraZeneca, and Kexing vaccines, all of which use different technologies.

Among them, Fosun and the German pharmaceutical company BioNTech's vaccine have been approved for emergency use. The mainland Kexing vaccine was also recommended by the Government Vaccine Advisory Committee on the 16th of this month, and today was approved by the Food and Health Bureau for emergency use, with 1 million doses of Kexing vaccine Arrive at Hong Kong first on Friday (19th).

The efficacy and side effects of the vaccine have attracted much attention. The government released the third phase data of Kexing Vaccine Brazil. Common side effects include pain at the injection site (60.34%), headache (34.31%) and fatigue (15.95%). The fever rate is 0.15%, which is higher than that. The other two vaccines ordered by the Hong Kong government are low.

The following will focus on the protection rate, common side effects of the 3 vaccines, and the age of vaccination of the population participating in the study.

In terms of vaccine protection rate, based on the data obtained by the Hong Kong Government's New Crown Vaccine Advisory Committee and the website of the Hong Kong Society of Hospital Pharmacists, Fosun/BioNTech vaccine (also known as Fubitai) has the best protection rate, reaching 95%; Oxford vaccine 1.5 doses The dose protection rate is also 90%, but the two doses dropped to 62.1%, and the overall effective rate was 70.4%; the overall effective rate of Kexing vaccine was 50.66%. If the time between the two doses is longer than 21 days, it can be increased To 62.3%.

The principle of vaccine injection is to stimulate human cells to produce an immune response, so the higher the effect, the more obvious the side effects.

Another common situation of vaccination is pain and redness at the injection site. The ratio of Fosun/BioNTech is 84.1%, the ratio of AstraZeneca vaccine is 88% (first shot data), and Kexing's lowest is only 60.34%.

15% of injections have diarrhea

Fosun Pharma/BioNTech of Germany and Kexing vaccines in the Mainland have been unanimously recommended by the government's vaccine advisory expert committee for emergency use.

The third phase clinical data of Kexing Vaccine was not published in a medical journal, and the committee disclosed the latest clinical data for the first time.

Cui Junming, president of the Hong Kong Institute of Hospital Pharmacists, pointed out that it is not advisable for the public to apply Coxing Vaccine data in Brazil to Hong Kong because of differences in ethnicity and local infection rates, and side effects such as pain are personal feelings. Chinese people generally can bear the pain. Therefore, the reported side effects may be lower. "You don’t need to be too obsessed with the numbers. It is not a comparison between apples and apples." However, it can be regarded as a reference. First, understand the common side effects after vaccination.

Cui Junming said that the first two phases of data were carried out in the mainland, and the third phase was in Brazil. You cannot directly compare the three phases. On the contrary, you can compare the comparison between the vaccine and the placebo in the Brazilian study. The two are in the same place, race and race. It takes time to know the level of side effects of the vaccine.

Cui Junming pointed out that the data from the third phase of the study can reliably reflect the side effects of the vaccine.

In terms of vaccine efficiency, the committee stated that Kexing vaccine was injected with two injections 28 days apart, and the protection rate could reach 62.3%, and the data was based on nearly 1,500 people.

Sources believe that nearly 10,000 people participated in the third phase of the vaccine data. Although most people received two injections within 14 days, only a small number of people received two doses 21 days or more apart. However, comprehensive data analysis shows that the two injections are separated. On the 14th, Kexing vaccine has a protection rate of at least 50%, which meets the requirements of the World Health Organization. If the time of two doses is extended, the effect will only be better.

It is reported that only 12 members and personnel from the Pharmacy Department of the Department of Health were present when the committee met. The latter would only provide data and would not comment on the quality of the vaccine.

Respiratory system specialist Liang Zichao believes that although the clinical data of 1,500 people are few, the longer the distance between the two needles, the protection rate can indeed be improved in theory, and the clinical situation has also confirmed the claim.

New crown vaccine | Kexing said the two injections are three weeks apart, the effective rate rises, experts say the theory is established but the number of people is small

Nie Dequan: Whether the vaccine can be vaccinated or injected within one week after arriving in Hong Kong will affect the entrance to places and homes for the elderly

Kexing Vaccine｜One article to see the protection rate, side effects and suitable for use by the expert Yungang

Kexing Vaccine｜Expert consultant recommended that the government use the second dose 28 days apart, the effect reached 62.3%

New Crown Vaccine｜News: Vaccination centers in 18 districts can be vaccinated immediately for those over 60 years old with priority

New Crown Vaccine | Disassemble the protection rate and side effects of three vaccines for Hong Kong. Is Kexing suitable for this group? 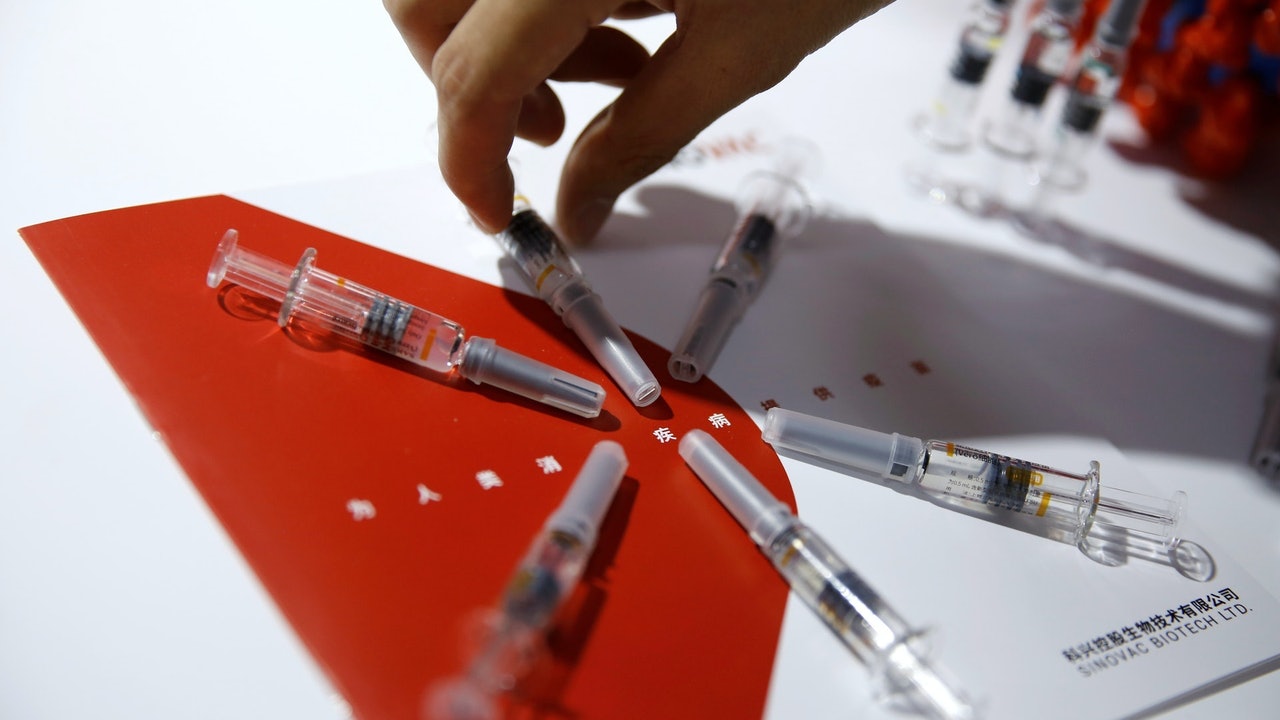 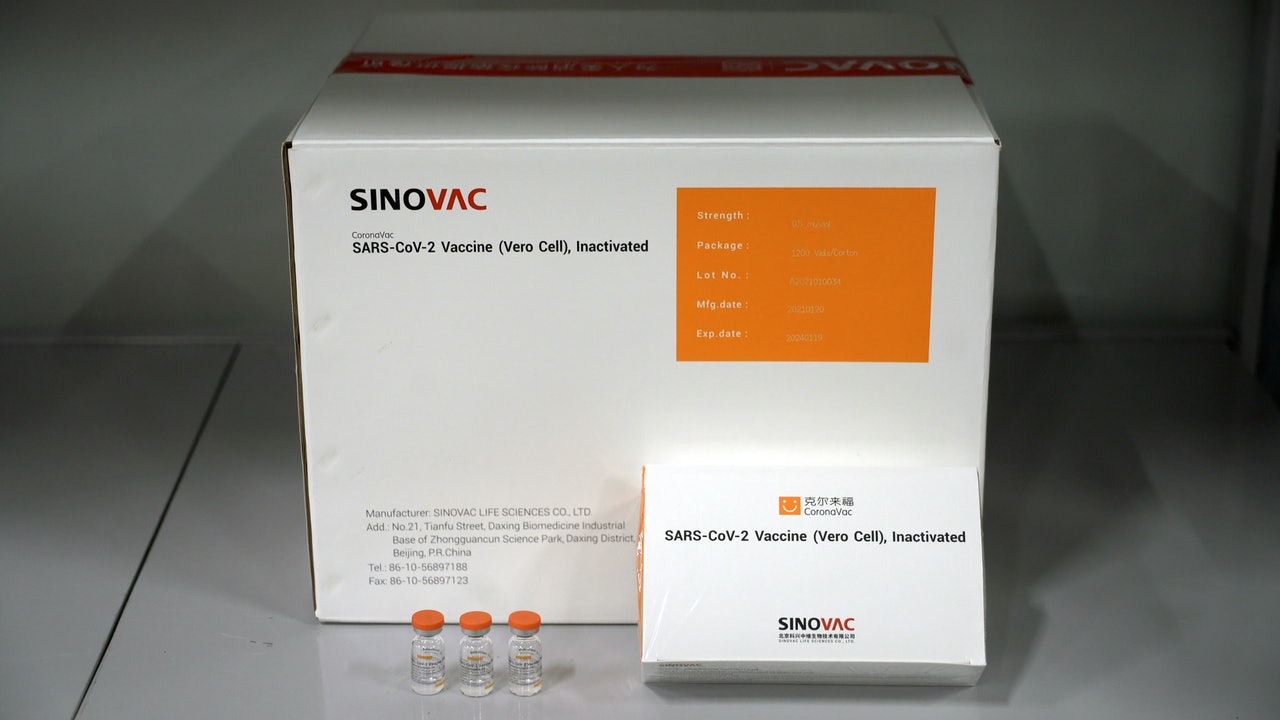 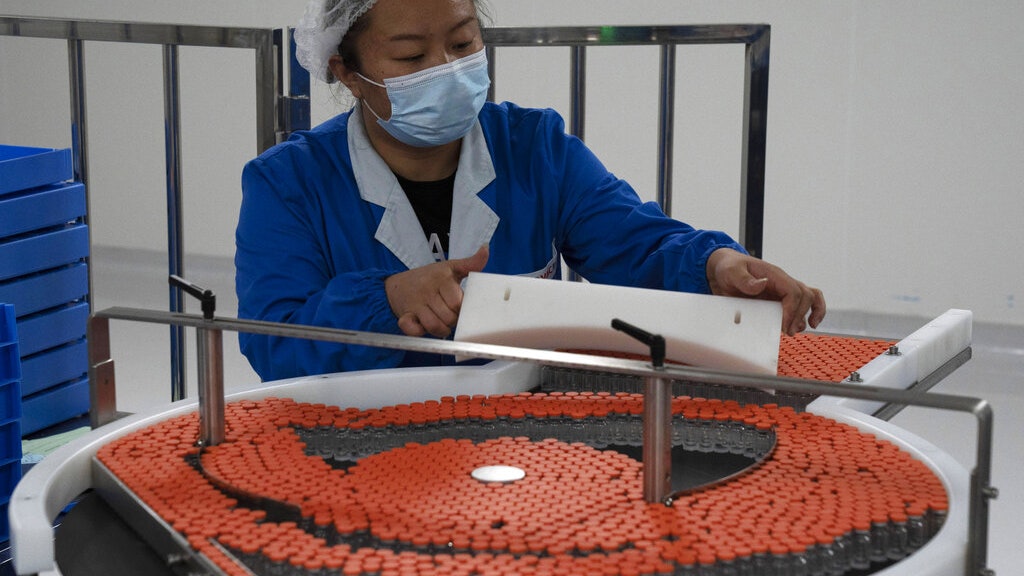 Kexing Vaccine｜One article to see the protection rate, side effects and suitable for use by Yungang 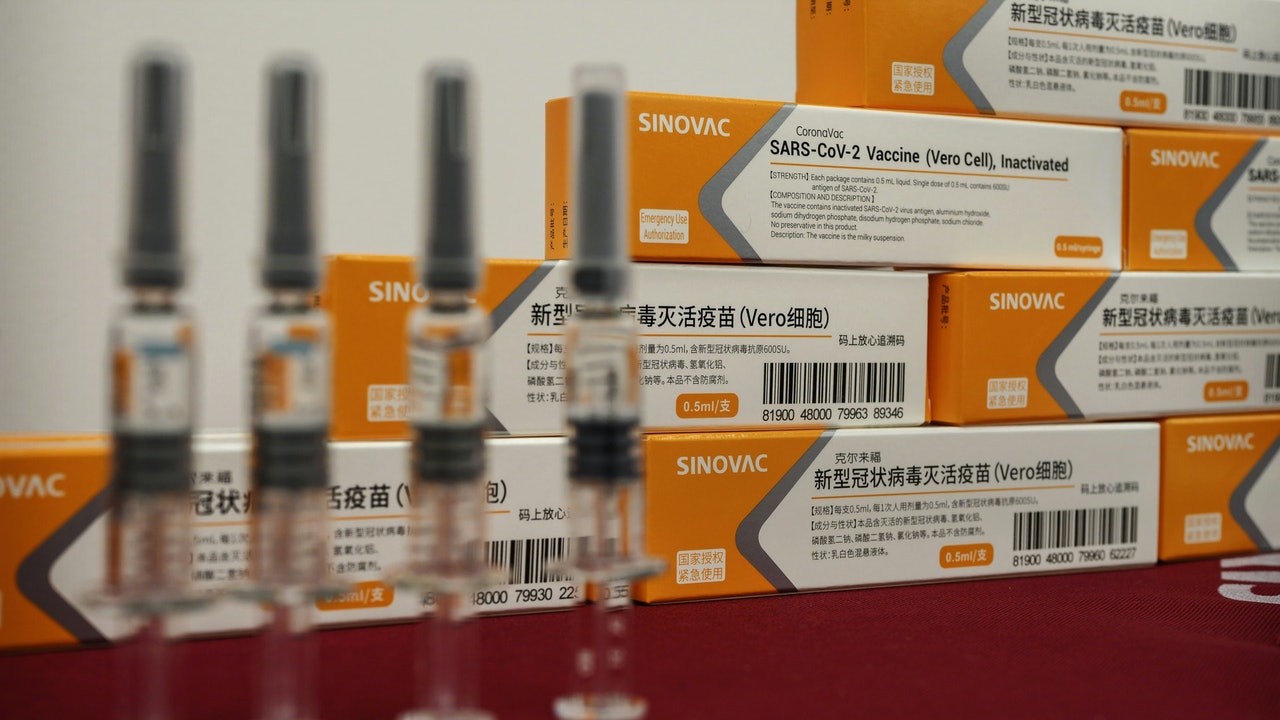 New crown pneumonia｜Yuan Guoyong: Kexing vaccine is suitable for vaccinations or once every two to three years 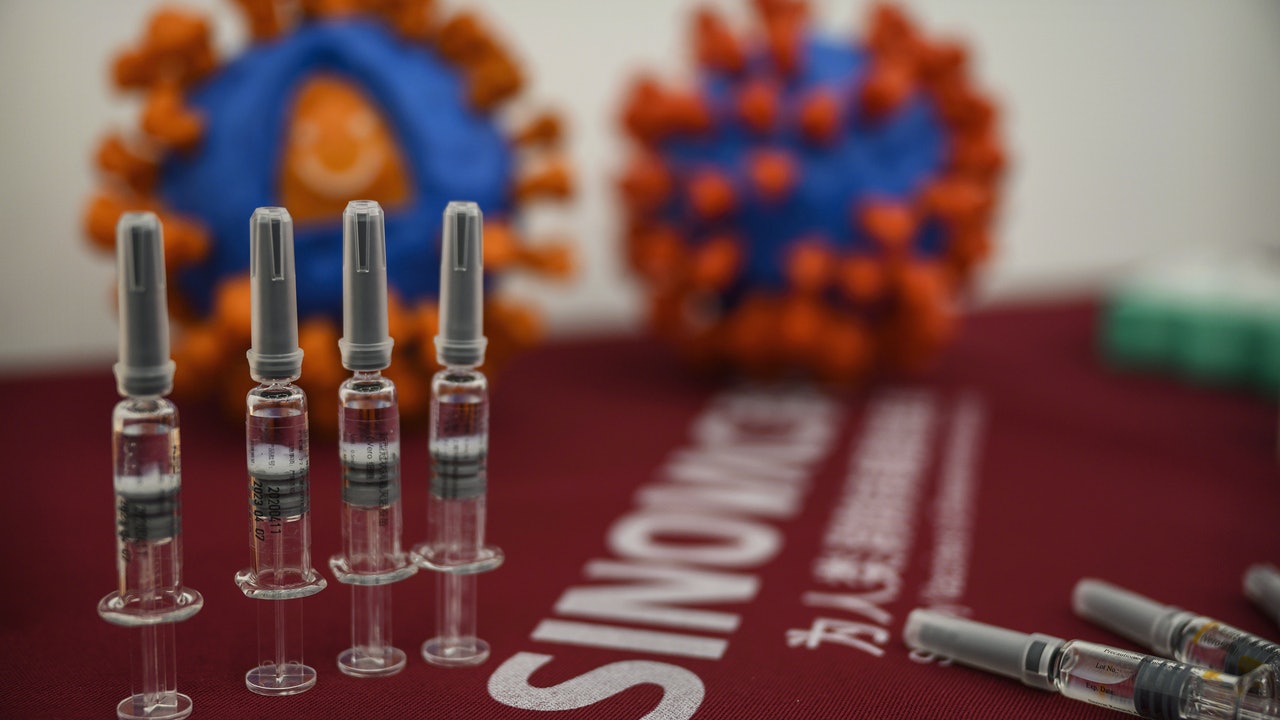 New crown vaccine | Kong Fanyi expects Kexing to publish a complete report in a short time, experts complete the approval in one or two weeks 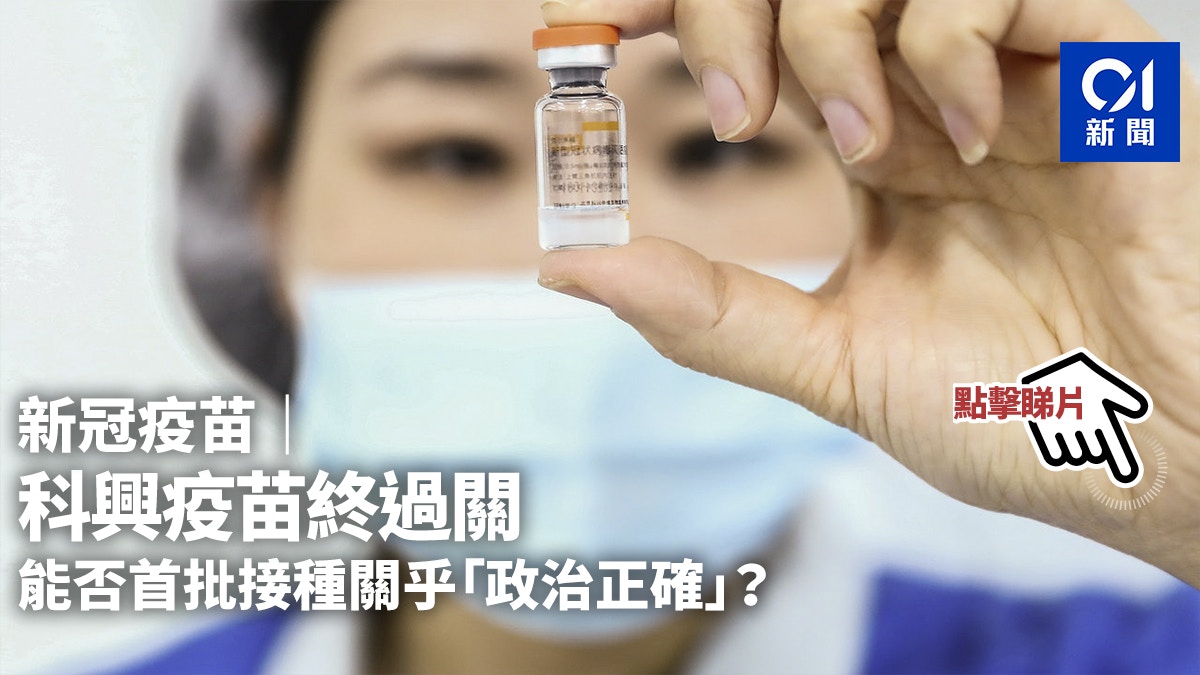 New crown vaccine | Can the first batch of vaccination of Kexing vaccine be related to "political correctness"?