| news Report: In return for the Israeli return, Israel purchased Russian vaccines for Syria • The outline of relief approved by the government • Many cleaned the beaches following the tar pollution disaster Report: Israel will fund vaccines for Syria in exchange for the young woman's return Israel has agreed to purchase millions of dollars worth of Russian Sputnik vaccines against Corona that will be 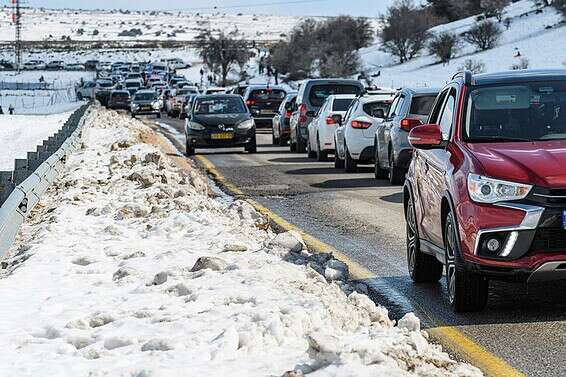 Report: In return for the Israeli return, Israel purchased Russian vaccines for Syria • The outline of relief approved by the government • Many cleaned the beaches following the tar pollution disaster

Report: Israel will fund vaccines for Syria in exchange for the young woman's return

Israel has agreed to purchase millions of dollars worth of Russian Sputnik vaccines against Corona that will be delivered to the Syrians in exchange for the Israeli return who crossed the border into Syria a few days ago and returned to Israel on Thursday night, according to US and Arab media reports.

According to reports, this is the part of the young woman's release deal that was banned from publication following Russia's demand.

Also, the exact price that Israel was required to pay under the agreement was not specified.

However, a Syrian source quoted by the Sana network denied what was published in some media outlets on a secret clause in the agreement for the release of Syrian prisoners.

The same source insisted that this was the promotion of fabricated information on a clause for obtaining vaccines from Israel, with the aim of exploiting the deal to harm Syria and the humanitarian characteristics of the deal.

According to him, the media want to portray Israel as human.

Meanwhile, Prime Minister Benjamin Netanyahu spoke on the phone yesterday (Friday) with the Israeli mother, who thanked for the efforts made to restore her daughter. Netanyahu wanted to strengthen her and her family and said that Israel will always work to bring back its citizens.

Thousands of travelers in the north of the country

Heavy traffic loads were felt today in the north of the country due to heavy traffic of thousands of hikers, who took advantage of the pleasant weather and went up to the Golan Heights to see the snow.

About 70,000 hikers visited the national parks and nature reserves on Saturday, with the most prominent sites being Yarkon Tel Afek with 2,700 visitors, and the sites in Caesarea and Tel Ashkelon with 1,700 visitors each.

The relief outline has been approved by the government

The government yesterday approved the second beat regulations as part of the exit from the quarantine that will set in motion tomorrow.

Simultaneously with the opening of more classrooms in the education system, it was decided on two opening routes: a route to the "green mark" for vaccinators against Corona and recovering, and an opening route with more restrictions for malls, street shops, museums and more.

In the field of education, it was decided to open the fifth, sixth, eleventh and twelfth grades in green and yellow localities according to the traffic light model.

It was also decided to allow studies in orange localities with a maximum grade of 7 and a vaccination rate for those aged 50 and over at least 70%.

Many Israelis visited the shores of Israel today, but not for recreation: following the contamination of the hard tar that was discovered on the beaches, civilians came to collect the waste that had accumulated in them.

It seems that this is the most serious natural disaster seen in Israel in decades.

Marine pollution is spread over an area of ​​more than 160 km - from the Nitzanim area to Rosh Hanikra. The incident caused the destruction of habitats and the infestation of sand, animals, vegetation, rocks and stones in tar.

"We are doing everything we can to find those responsible for the destruction of the beaches and the human damage to the living environment," Minister of Environmental Protection Gila Gamliel said yesterday.

"We are ready to resume the powers' talks on the nuclear deal with Iran," US President Joe Biden said yesterday at a digital conference in Munich.

In addition, Biden promised to "earn" the trust of European countries again.

Biden said the United States is ready to resume talks on the 2015 agreement, which former President Trump withdrew from in 2018.

Already yesterday, the new administration announced that it aspires to hold negotiations with Iran, and took a preliminary step at the UN to return to the policy that preceded the Trump era regarding the agreement.

After some turbulent and exciting days in Israel, Said Moulay, the Iranian judoka who found refuge in Germany and moved to represent Mongolia, lost the battle for the gold medal against the Uzbek Boltboab.

He will be content with money and a great deal of respect and appreciation for the sporting spirit and courage he demonstrated when he landed in the country.

Everyone expected a fight that would bring together Said Moulay and Sagi Muki in the final up to 81 kg at the Tel Aviv Grand Slam, but only one side fulfilled its part.

After Muki was eliminated in his first battle, the Iranian qualified for the finals and secured a historic medal on Israeli soil.

Kim Kardashian has filed for divorce from Kenya West

After six years of marriage, Kim Kardashian has filed for divorce from Kenya West, US media reported.

In recent weeks a breakup of the world-famous couple has been reported, but only last night did the official confirmation arrive.

Kim reportedly asked for joint custody of their four children.

Sources involved in the details told TMZ that Kenya has agreed to the arrangement for joint custody and the former couple are committed to this.

Maccabi Haifa: Abyssinian does not suffer from a hand crisis, worry about Tuatha's condition - Walla! sport

The chairman of the Iranian Judo Association attacks Said Moulay: "Stupid, turn his back on the homeland for a handful of dollars" - Walla! Sports

Maccabi Rishon Lezion is trying to bring back Igor Kolshov until the end of the season - Walla! sport