Senior health officials hope the night curfew will prevent violations: "Do not go back" - Walla! news

The Ministry of Health and the Magen Israel project explained that despite the rate of vaccines, mass gatherings throughout the holiday could still lead to another outbreak of the corona plague, and said they believe the move will help prevent most violations while reducing harm to the economy. "It would be a shame to lose everything for parties"

Senior health officials hope the night curfew will prevent violations: "Do not go back"

The Ministry of Health and the Magen Israel project explained that despite the rate of vaccines, mass gatherings throughout the holiday could still lead to another outbreak of the corona plague, and said they believe the move will help prevent most violations while reducing harm to the economy.

"It would be a shame to lose everything for parties"

Senior health officials tonight (Wednesday) expressed hope that the decision to impose a night curfew on Purim - rather than a regular closure - would prevent most of the dangerous gatherings throughout the holiday.

In conversations with Walla!

NEWS, Deputy Health Minister Yoav Kish and the head of the Corona Cabinet in the Magen Israel program, Prof. Ran Blitzer, say that the measure could help prevent the spread of the corona virus in Israel, without seriously harming the process of returning the economy to activity.

Last night, the government approved the imposition of restrictions on gatherings during the coming weekend, when Purim will be held.

In accordance with the recommendation of the corona commissioner, Prof. Nachman Ash, a night curfew will be imposed on Thursday, Friday and Saturday, from 8:30 PM to 5:00 AM, in order to prevent mass participation in Purim parties.

The government decided not to exclude cultural events scheduled for those days, after the industry returned to activity as part of the green label.

Public transportation is also currently being reduced by 50%.

The restriction of traffic to a distance of one thousand meters will take effect again, and parties and moving from house to house will be banned.

Restrictions on Purim: Ministers approved a night curfew from Thursday to Sunday

"It should be remembered that half of the public is not vaccinated."

Deployment of checkpoints, about a month ago (Photo: Reuven Castro)

Kish explained that "in all the considerations, in order not to harm the economy - the choice was a night closure, when on Purim we saw that many violations of nocturnal gatherings were planned."

He estimated that by this step "most violations will be avoided".

"Obviously the police will still act to enforce, and even if there are still violations - most fear of mass violations will be avoided due to the night closure," Kisch said. Where there is no closure. "

A night curfew on Purim

Check the morbidity trend in your locality:

Prof. Blitzer described the current situation as "critical", as mass gatherings on Purim could, according to him, lead to a "reversal" in terms of the disease situation in Israel.

"The government has created a very extensive list of easing in the current pulse of the economy. We want to continue the next pulse in a week and a half and we do not want to endanger health and the public by changing the current and positive trend we have seen so far," Blitzer said.

"The restrictions and vaccines have led to a welcome trend and in a few days of misbehavior we can go back."

He stressed that "the potential for spread is very great and it would be a shame to lose everything for parties."

"It should be remembered that half of the public is not vaccinated, and 40% of the vaccinated are not yet fully vaccinated and have not completed the process of the two vaccine doses," he said.

Senior health officials hope the night curfew will prevent violations: "Do not go back" - Walla! news

24 deployment points around the country: Map of the checkpoints for the night curfew on Purim - Walla! news

Netanyahu asked Biden: Do not remove the sanctions that Trump imposed on senior officials in The Hague - Walla! news

The Ministry of Health is formulating a plan to vaccinate houseboys, but MDA is acting contrary to guidelines - Walla! News

US officials: Internal disputes in Iran make it difficult to return to nuclear deal - Walla! news 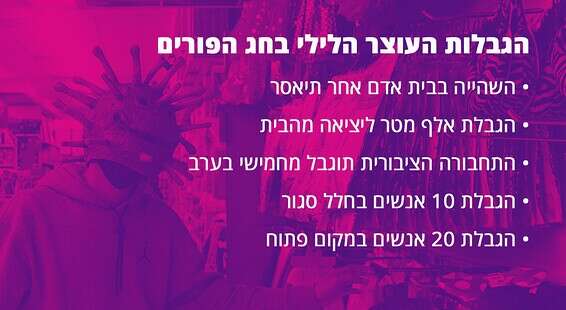 Holiday at home: This is how the police intend to enforce the night curfew on Purim Israel today 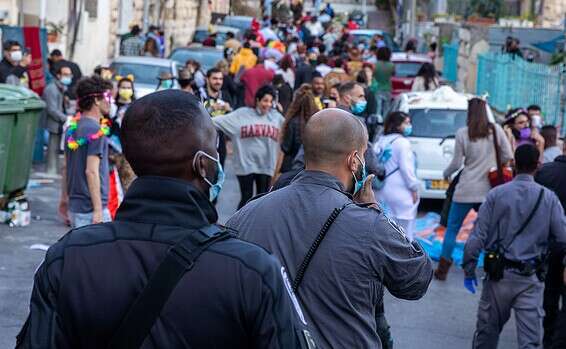 The police repel the criticisms: "The aliyah is unjustified and creates damage" | Israel today