A group of protesters has set fire to a van of the Urbana Guard riot unit New night of barricades and riots in Barcelona. Thousands of people, 4,000 according to the Guàrdia Urbana, have toured the center of the city this Saturday in a march that began in the Plaza de la Universitat, where protesters have gathered from various neighborhoods and chanting slogans such as "freedom, Pablo Hasél ”,“ Freedom of expression ”or“ anti-capitalist ”. The march has led to serious i

New night of barricades and riots in Barcelona.

Thousands of people, 4,000 according to the Guàrdia Urbana, have toured the center of the city this Saturday in a march that began in the Plaza de la Universitat, where protesters have gathered from various neighborhoods and chanting slogans such as "freedom, Pablo Hasél ”,“ Freedom of expression ”or“ anti-capitalist ”.

The march has led to serious incidents with barricades, attacks on at least one bank, ATMs and the launch of a

at a Guàrdia Urbana van.

The demonstration was the ninth that had been called in the Catalan capital to protest the imprisonment of rapper Pablo Hasél for exalting terrorism and insulting the Crown.

The protest has passed calmly until some protesters on the Rambla, with hammers and tools to hit, have destroyed all the ATMs they have found in their path and windows of banking entities, even with fire, which has forced the intervention of the firefighters in some of them, such as the one found in the listed building of the Casa de los Paraguas.

The most tense episode occurred at the Guàrdia Urbana police station, when protesters threw flammable material into the underside of a police van that caught fire and in which there was at least one officer, who was able to escape unscathed.

The Mossos d'Esquadra have arrested 13 people, including a person linked to the attack on the police van.

The mayor of Barcelona, ​​Ada Colau, has "roundly condemned the violent events in Barcelona after a peaceful demonstration" and has expressed her support for the Guàrdia Urbana, agents from the Rambla police station, and neighbors and merchants affected by the altercations ".

The acting vice president of the Government, Pere Aragonès, has stated that "the looting or destruction of shops, the burning of furniture or the attack on public workers are neither freedom of expression nor of demonstration."

The right to protest is totally legitimate.

Violence and vandalism, no.

The meva condemns outright to the violent fets that went to Barcelona after a peaceful demonstration.

The regional police have explained that the protest "has detected 250 or 300 people in a violent attitude acting in groups of 15 and 20 people in parallel to the bulk of the demonstration, which has traveled the center in a peaceful attitude."

According to the same sources, part of these groups were "organized, they have launched pyrotechnics and have used gasoline to set fire inside banks and have launched flares with gasoline or similar."

They have also warned that some protesters have set up barricades to hinder police action.

The riots this Saturday in Barcelona take place at a time of great tension due to the strong internal unrest in the body of the Mossos d'Esquadra, which does not feel supported by its political leaders.

During the last ten days, several leaders of the pro-independence parties have criticized the work of the body, especially after the episode in which a protester lost an eye, presumably due to a foam projectile launched by the regional police.

The anti-capitalist formation CUP - represented this Saturday at the beginning of the demonstration by Carles Riera and Eulàlia Reguant -, which conditions the formation of a new independence government, has called for the dissolution of the anti-riot brigade of the Mossos (Brimo) and the two parties majority, Esquerra and Junts, have agreed to discuss a new model of public security.

However, the malaise of the Mossos has caused the debate to be put on hold until after the inauguration of the new president of the Generalitat, for which there is still no date set.

Preceded by a banner with the slogan “Until they fall.

Upon reaching the neighborhood police station, where the Mossos d'Esquadra have made a police barrier, some protesters have thrown objects at them while others have crossed containers in the street.

The march has gone to the Rambla, where they have continued attacking ATMs and banks, several with broken glass.

At the Guàrdia Urbana police station there have been more launches and graffiti has been done on police vans, to which the protesters have thrown flammable liquid that has burned on the underside.

The Mossos d'Esquadra have intervened by taking vans up the Rambla to drive away the protesters from the place.

Already in Plaza de Catalunya some protesters have broken the windows and looted a Zara store, and a Decathlon store a few hundred meters away.

In the Rambla de Catalunya they have attacked a hotel of the NH chain.

During the morning there have already been protests in different Catalan towns: Girona, Terrassa and also Barcelona.

In addition to the Catalan capital, there have been protests in Lleida, where the singer is from and where he is interned in the Ponent penitentiary.

There have been attacks with stones on a Local Police patrol and damage to commercial establishments.

There have also been incidents in Sabadell and Tarragona.

This Friday the plenary session of the Barcelona City Council asked for the rapper's pardon and rejected the violence in the protests.

The reiteration in the protests has been criticized by different political leaders.

The acting president of the Generalitat, Pere Aragonès, has condemned "the looting and destruction of shops, the burning of furniture or the attack on public workers", which are "neither freedom of expression nor of demonstration".

The mayor of Barcelona has shown through Twitter her "resounding condemnation of violent acts" and has shown her support to the agents of the Urban Guard, residents and merchants affected.

For his part, the socialist candidate for the presidency of the Generalitat, Salvador Illa, has exposed his "unfailing support" to the agents of the Local Police and the Mossos in which he has described as "a new night of serious altercations" .

To the political anger is added the economic one, with the main Barcelona business entities preparing an act of rejection of the events experienced in the last days of protests.

The singer's arrest was on Tuesday February 16 at the University of Lleida.

Since then there have been periodic protests in different cities throughout Spain.

In Barcelona from that same day, demonstrations were called in which there were disturbances, clashes with the Mossos d'Esquadra and looting from the day of the arrest and uninterruptedly for eight nights, until February 23.

The protests after the rapper's imprisonment have been characterized by being convened by different accounts on the networks.

There is no visible entity or leadership behind them.

This Saturday, in addition to demanding Hasél's freedom, he also demands amnesty for all those detained and imprisoned during the nights of protest.

In Barcelona the concentration was in the Plaza Universitat.

In addition, an hour before the departure of columns of protesters from Plaça de Sants, Plaça de Lesseps and Gran Via con Marina was scheduled.

During the morning, in Girona, 400 people demonstrated without incident in the center demanding the freedom of Hasél and the prisoners of the

In the same city for two hours a group of protesters has blocked the highway, until the regional police have evicted them without incident.

In Barcelona, ​​in the morning several hundred people have demonstrated in the Sants neighborhood demanding the acquittal of Carles, a neighbor who was arrested, imprisoned and released after participating in last week's protests and moving fences in front of the Mossos.

The march went by without incident and the protesters blocked Avenida de Madrid, one of the arteries in the area, for a few minutes.

In Terrassa, and after the protest with riots and seven detainees last night, there has been a concentration of family, friends and members of the antifascist movement in front of the courts.

Three of the detainees, minors, have been released. 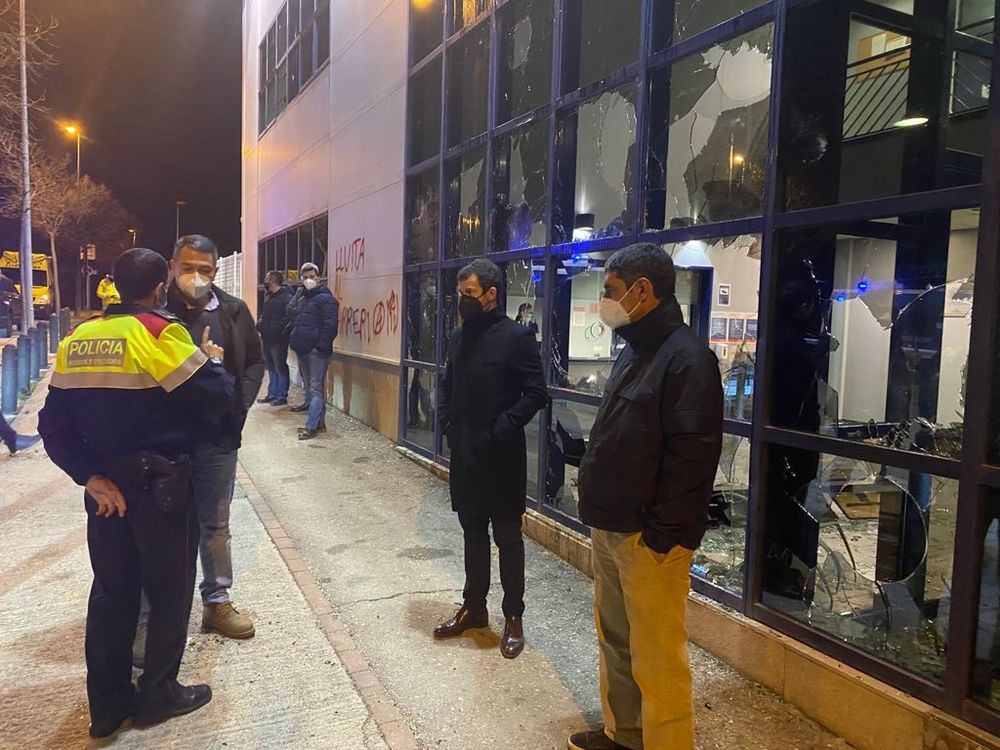 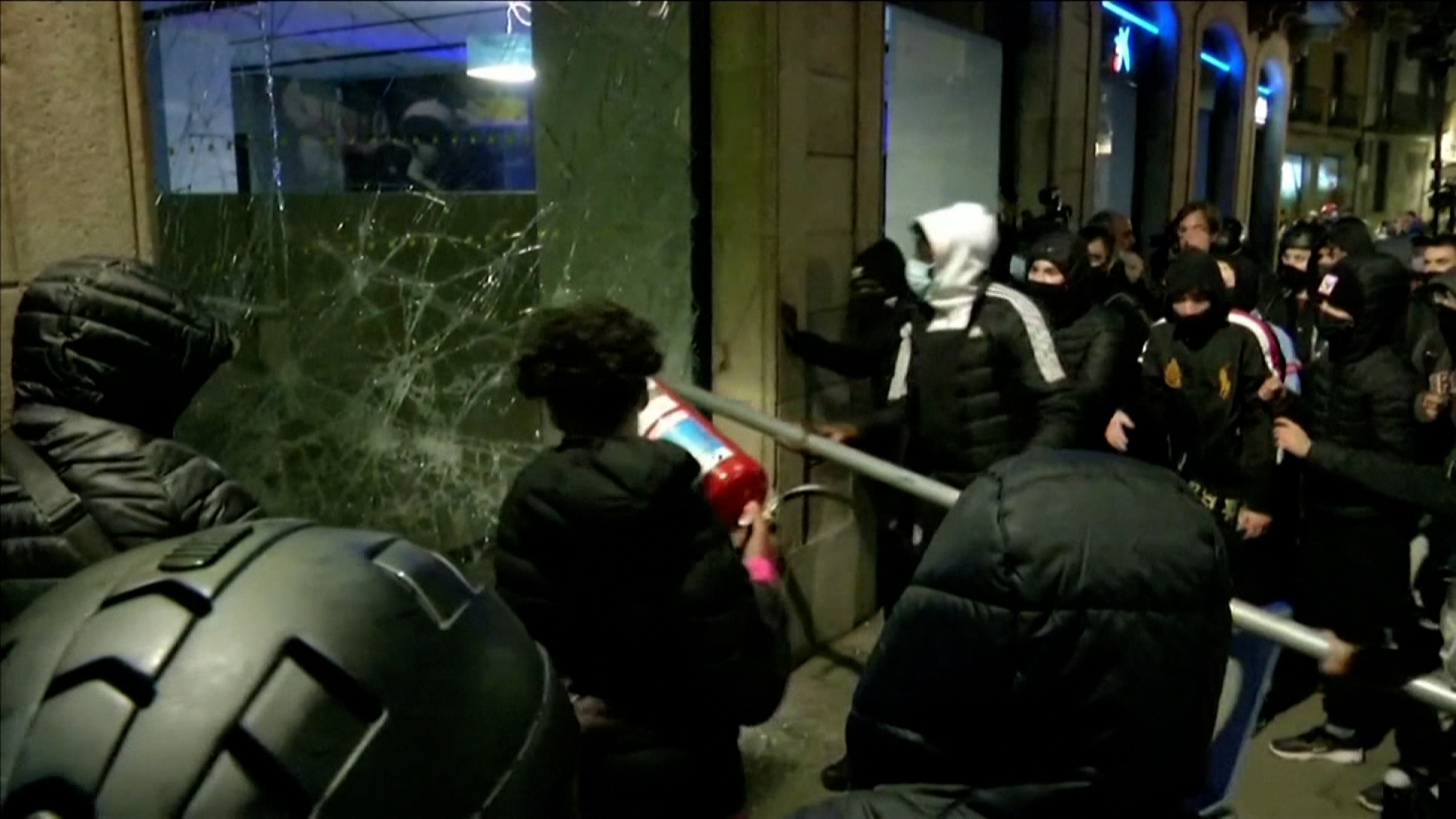 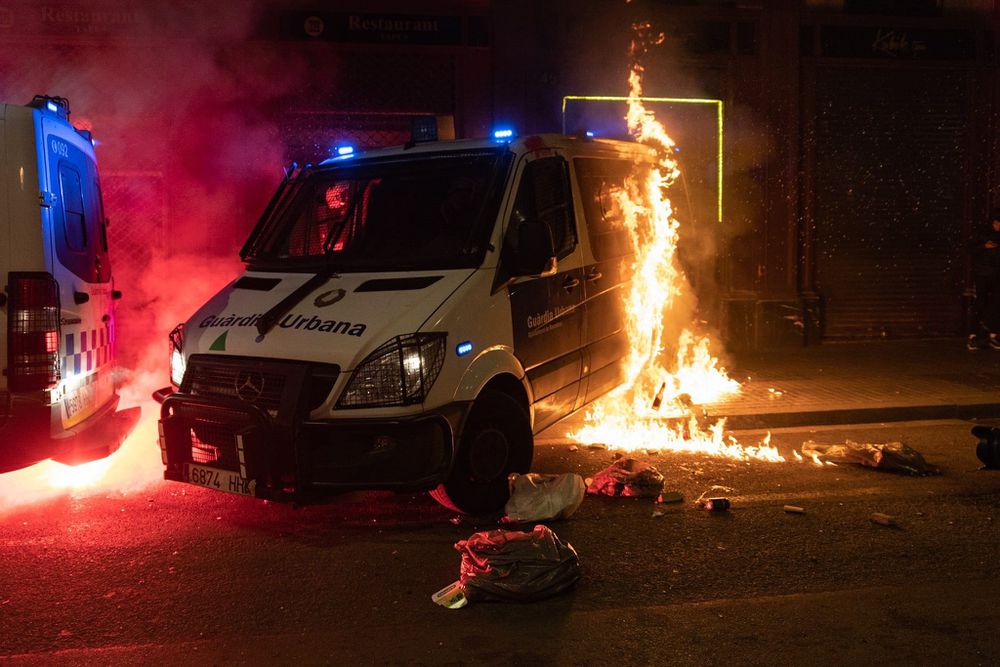 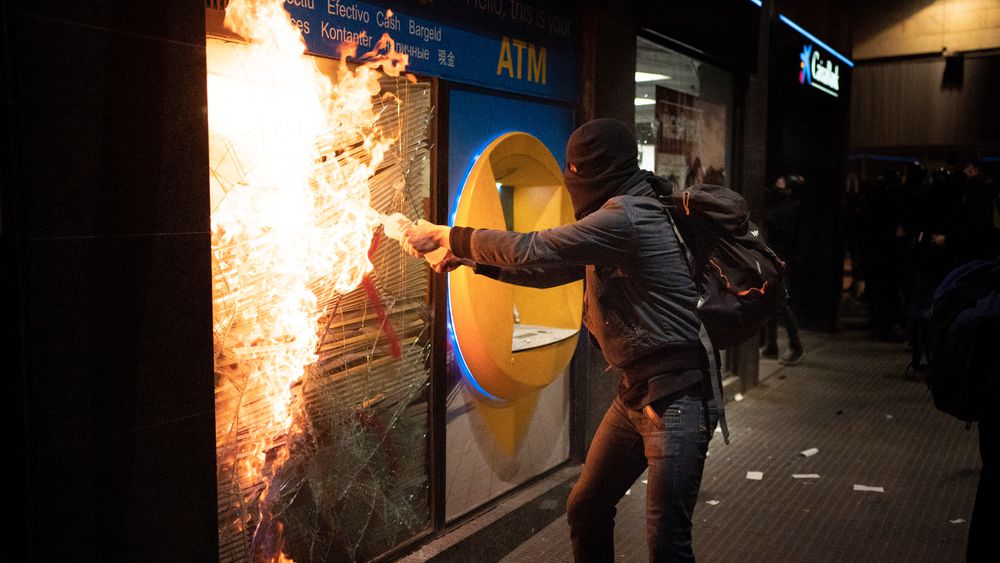 The police unions explode before the escalation of violence in Barcelona 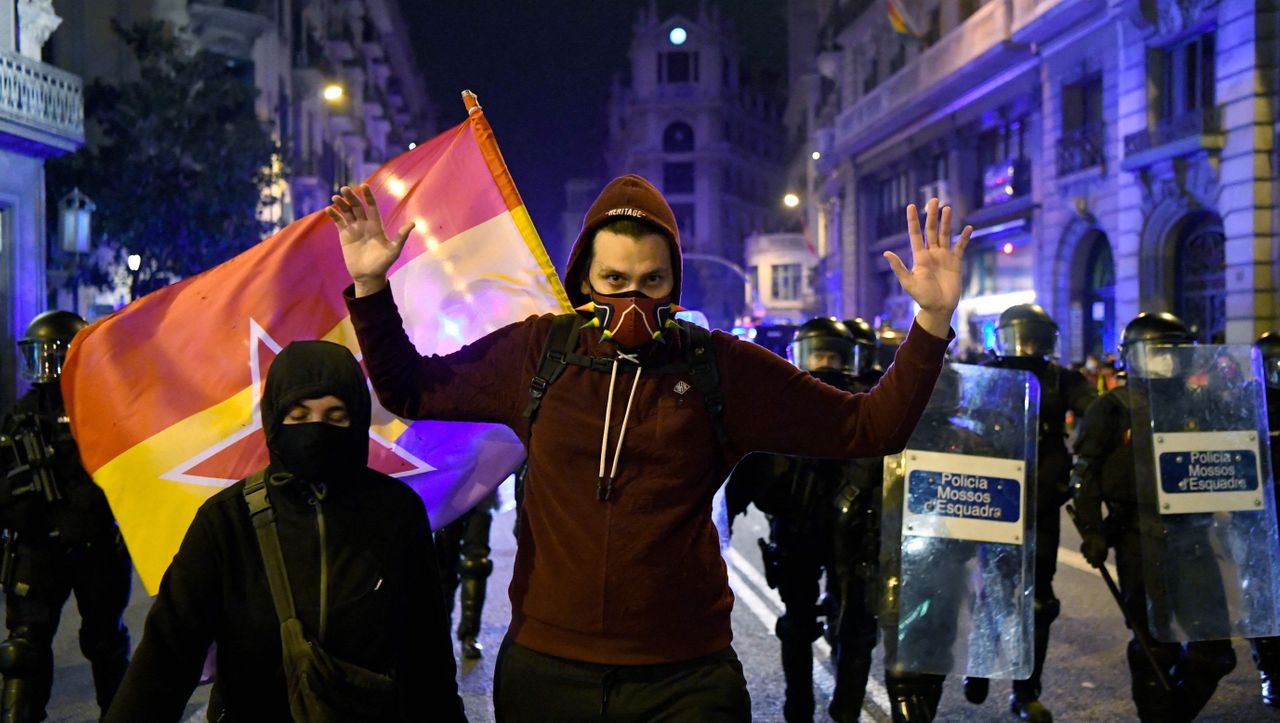 Barcelona: Riots over the arrest of rapper Pablo Hasél 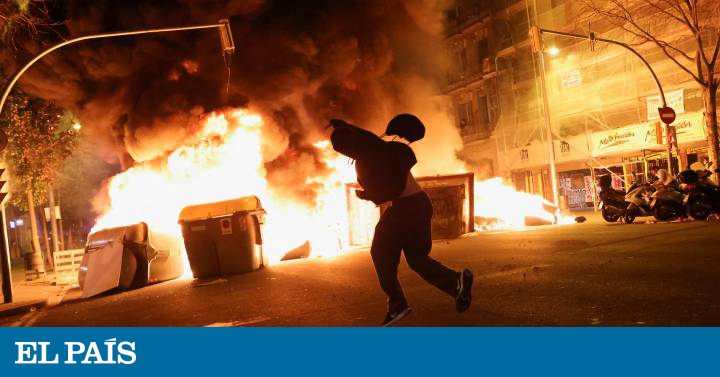 Third day of protests over the imprisonment of Pablo Hasél, in pictures 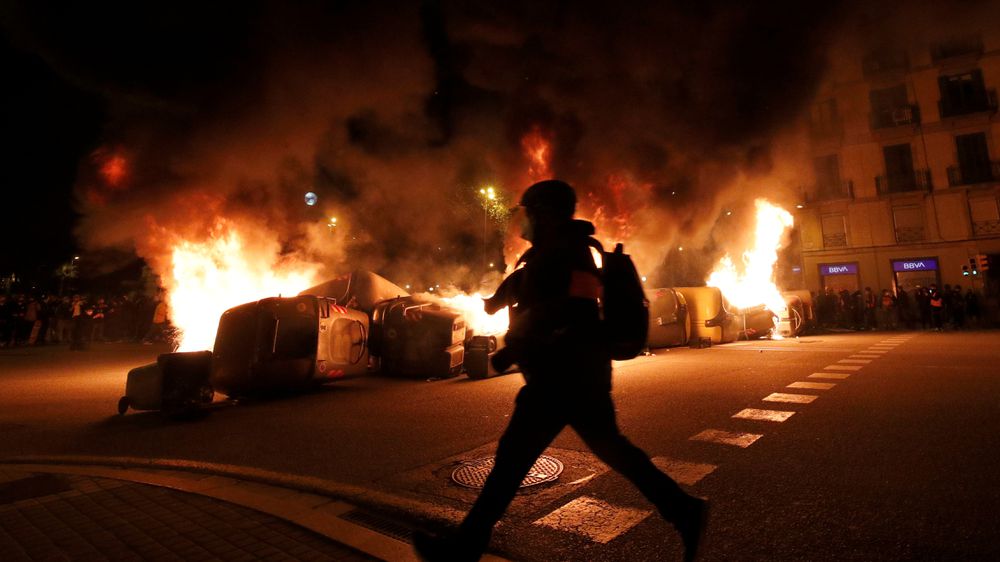 Demonstrations by Pablo Hasél in Spain, live | The riots in Barcelona lead to looting of shops in the center and reach the Palau de la Música