Does Europe need its own vaccination diplomacy? China and Russia deliver vaccines all over the world - so far Europe has mainly discussed vaccination coverage at home. This could change soon. Does Europe need its own vaccination diplomacy?

China and Russia deliver vaccines all over the world - so far Europe has mainly discussed vaccination coverage at home.

Munich - China sells and donates its corona vaccines all over the world.

In the past few days and weeks, Chinese vaccine deliveries have arrived in Chile, Indonesia, Azerbaijan, Zimbabwe and Sierra Leone.

Serbia and Hungary inoculate the Chinese vaccines on a large scale.

Both countries justify the step with slow deliveries from the EU.

Belarus also received vaccine from Beijing - unlike the other two countries as a free donation.

This vaccination diplomacy is on the one hand help - but also interest politics.

In China, too, the phrase "win-win" has become commonplace: both sides benefit.

The states concerned receive vaccines, and China in return better market access or even political influence.

In general, this is legitimate - but from the perspective of the West, it is not directly desirable.

The difficult question is therefore whether and how Europe should respond to the vaccination campaigns of China, Russia and India in poor countries with its own vaccination diplomacy - for humanitarian as well as geostrategic reasons.

Many countries bought China's vaccine because it was the only one offered to them.

The EU has some catching up to do here.

Vaccine diplomacy for Europe: it is better to deliver vaccines than donate money

The debate on this is already underway.

“At the moment, any vaccination that can be given is better than no vaccination.

The fact that China - and, by the way, other powers too - want to increase their political influence through this should be an incentive for us in Europe to step up our commitment, "said the SPD reporter for global health, Heike Baehrens,

French President Emmanuel Macron had already called at the Munich Security Conference to donate vaccines to poor countries instead of money - so that they do not buy the money in China or Russia.

"We need greater sensitivity to the geopolitical implications of the pandemic," said Andrew Ullmann, chairman of the FDP parliamentary group in the health committee,

“We see that China is trying to gain influence in regions strategically relevant for Europe through gaps in the vaccine distribution.” Basically, the vaccines from China and Russia are not to be rated worse if they are carried out under the same internationally customary qualitative study conditions and published validly according to Ullmann.

"Regardless of this, the EU must show more commitment at the multilateral level, i.e. within the WHO, and at the same time strengthen its bilateral activities, for example through regional EU + x formats."

Ottmar von Holtz, spokesman for civil crisis prevention of the Green parliamentary group in the Bundestag, even observed a "competition of systems" in the international fight against Covid-19.

He is very critical of China's commitment because it creates financial and political dependencies.

"The West should be portrayed as weak in the global fight against the pandemic and China and Russia as the only solidarity countries," said von Holtz

"By distributing the vaccines developed in the EU not only to poorer countries, but also, for example, to EU accession candidates, we could effectively counter this narrative and practice solidarity with partners around the world."

Among the EU accession candidates in the Balkans, for example, Serbia was the only country that had even started corona vaccinations at the end of February - and most of these came from China or Russia.

"Of course it damages the international reputation of the affluent Federal Republic of Germany if other countries distribute vaccines while the German government gives priority to the interests of the German pharmaceutical industry," says Achim Kesser, left spokesman for health policy.

However, access to vaccines should not be misused as a means of exerting pressure on foreign policy.

request to any parliamentary group on the subject.

UN: Gap between North and South - 75 percent of all corona vaccines in only ten countries

It is precisely the respective governing parties in the EU and within the member states that have to face the debate on how to get their own people vaccinated as quickly as possible.

The progress of the corona vaccinations is a constant controversy in this country - recently enriched by the question of what to do with excess doses of the AstraZeneca vaccine, which is unpopular in Germany.

The fact that the situation is much more precarious in large parts of the world hardly plays a role in this debate.

However, too much egoism could cost the rich countries dearly in the Corona crisis.

So far, according to the UN, 75 percent of the vaccine has been administered in only ten countries.

In 130 states, vaccination has not even started.

The gap between north and south is great.

After all, the international vaccine program of the United Nations Covax is now starting to deliver the first vaccine packages.

Covax announced Tuesday that it had allocated 237 million doses of the AstraZeneca vaccine to dozens of countries.

The vaccines are to be delivered and inoculated by May - the first have already arrived in Ghana and the Ivory Coast and have been in use since Monday.

In addition, 1.2 million doses of the BionTech vaccine are to be added in the first quarter, which have also already been allocated.

People waiting in Budapest in front of a senior citizens' club - Hungary has been vaccinating the Chinese Sinopharm corona vaccine since the end of February.

Last week the country began to inoculate the Chinese vaccines.

Prime Minister Viktor Orban had himself vaccinated with the Sinopharm vaccine in front of the cameras.

In Serbia, 544,000 Chinese vaccine doses had been injected by mid-February, according to local reports.

At the beginning of February, Xi offered corona vaccine deliveries at the virtual 17 + 1 summit with Central and Eastern European countries.

According to Poland's presidential office, Xi was open to Warsaw's interest. 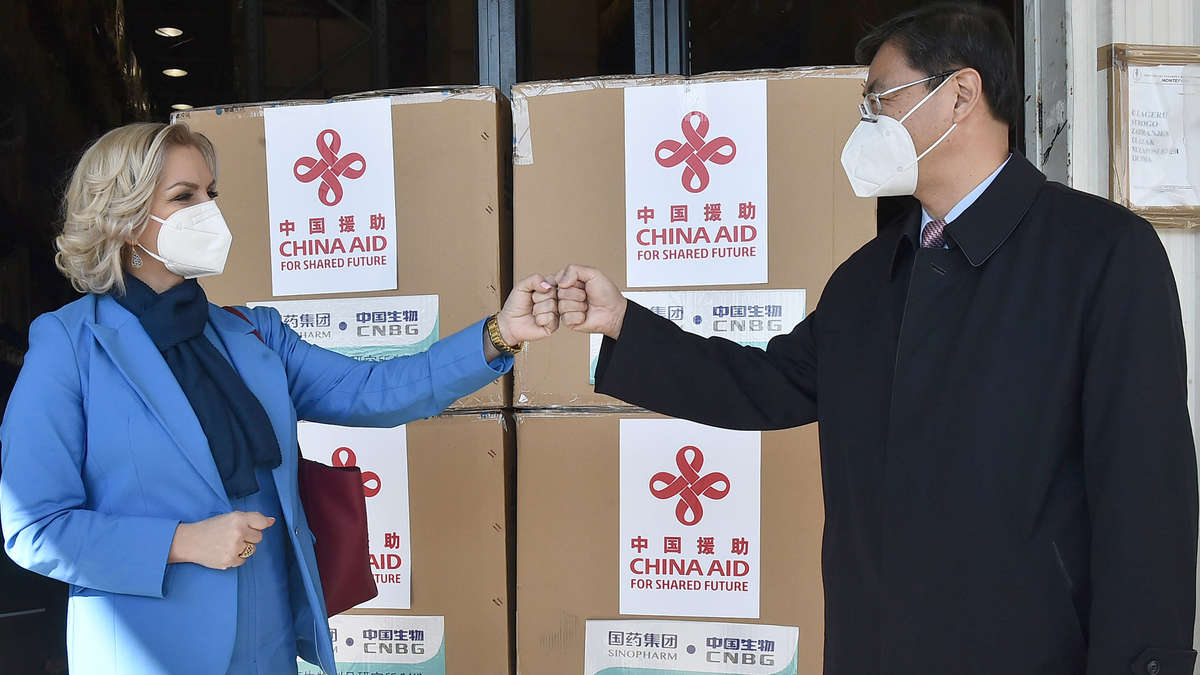 China and Russia are duping the West in vaccinating - and are now celebrating: "Role models for openness and support"