The CDU politician goes to the next battle after each defeat. A new arms race looms between the USA and China - with combat robots. And the corona lockdown should continue, only more loosely. That is the situation on Tuesday evening. 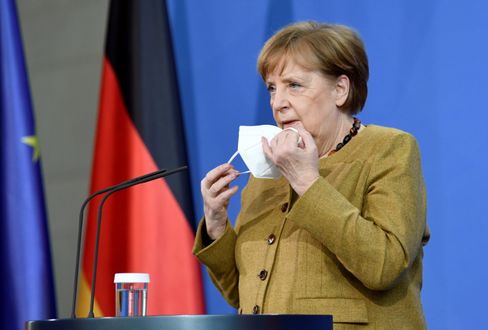 , but it will be relaxed.

This is indicated by a resolution proposal for tomorrow's video meeting between the Chancellor and Prime Minister.

Perhaps then you can officially receive more than one person as a visitor.

Maybe the daycare centers and schools are making progress, but there is probably a lack of sufficient rapid tests.

In any case, Angela Merkel insists on an

"emergency brake if the numbers go up again,"

as can be heard.

We won't know exactly until tomorrow.

There are umpteen suggestions, quotes and accusations in circulation.

"Top politicians are currently outbidding each other with new corona strategies," says my colleague Julia Köppe from our science department.

Some of the ideas are risky from a research perspective.

"The number of infections is increasing - not a particularly good time to relax," she says.

How well Germany will get through the impending third wave depends above all on how quickly vaccinations go ahead and whether rapid tests are used wisely.

Fighting machine from the Sauerland

The T1000 of German politics is called

The almost indestructible fighting machine from the best Terminator film ("Day of Reckoning") survives almost every battle, the CDU politician reappears after every vote defeat.

He did not make it to the top of the CDU twice.

The Chancellor ignored his offer to join the cabinet as Minister of Economics.

Now he apparently at least wants to run again in the Bundestag and in his old constituency as a direct candidate, as my colleagues Florian Gathmann, Kevin Hagen and Veit Medick report: “Merz signaled to confidants that he wanted to declare his candidacy in a round of the local district association this evening . "

The problem: There is already a CDU member in the Hochsauerland district.

Interior expert Patrick Sensburg has represented the constituency in the Bundestag since 2009 - and would like to continue to do so.

"I'm sticking to it: I'll compete again," he says.

"If I have to, I am not afraid of running for a fight."

Why is Merz provoking the next power struggle?

"I think he has the feeling that he has lost the fight for the party leadership too narrowly to get out of politics entirely," says Veit.

“Whatever might develop out of a Bundestag mandate - he would gladly take it.” The risk: “He threatens to appear as someone who cannot let go.

Whoever wants to get involved. ”Maybe it is like this: The T1000 can change its shape, Merz cannot get out of his skin.

The question is who will take on the role of Arnold Schwarzenegger.

Fighting machines on the battlefield

In the Terminator films,

against its creators, i.e. us humans.

For a long time I thought that was science fiction - in the words of my colleague Christoph Seidler from our science department: “Anyone who has ever used a computer, who has dealt with crashes and hidden updates, can only find the idea grotesque that machines are about life and decide death. "

Ancestor of the Terminator?

But apparently we are closer to the

than I thought: “The enormous technological advances that have been made in the fields of robotics and artificial intelligence in recent years have put this notion of autonomous weapons on the threshold of concrete Implementation moved «, says the best robot German in an expert report by the Office for Technology Assessment at the German Bundestag.

In the United States, Pentagon advisors are now recommending to new President Joe Biden that America must be right at the forefront when it comes to developing such weapons systems.

Otherwise China will take this place.

"A revolution is taking place in military technology

, the third fundamental one after the invention of black powder and nuclear weapons," reports Christoph, who has analyzed the Pentagon paper.

“For us in Germany, too, this is not a purely academic debate.

The Federal Republic is currently negotiating with France and Spain about the construction of a “Future Combat Air System”.

In addition to a fighter aircraft that is supposed to replace the Eurofighter, this would also include so-called remote carriers.

And these unmanned missiles would then have at least some autonomous functions. "

The only consolation: Even the Pentagon advisors do not want to have atomic weapons controlled by machines.

Sarah Connor says at the end of "Terminator 2": "The unknown future is rolling towards us and for the first time I look at it with a feeling of hope." I would not go that far.

(You want to get the "situation in the evening" by e-mail easily to your inbox?

you order the daily briefing newsletter.)

, now corrected: "Instead, the affluent countries of the north have secured many times the amount of vaccine they need to feed their own people."

If you are lucky, the bookseller in your neighborhood or town still has its window sales open and has it in stock, if necessary you would have to switch to the e-book.

In any case, Kracht became famous with his novel “Fiberland”, “the story of a journey from north to south, on which an aesthetically highly sensitive loner worked his way through West German society in the 1990s”, as my colleague Sebastian Hammelehle, head of the cultural department, describes it.

More than a quarter of a century has passed since "Fiberland", Kracht has written other great novels and occasionally worked for SPIEGEL for a while.

His new book is touted as a continuation of his debut, and Sebastian also writes: “› Eurotrash ‹is ​​like› Fiberland ‹a travel story.“ This time, however, “it's not about experiences at the airport gate or the ICE boarding station, but about a journey in itself.

The book reads like the report of a psychoanalysis.

The real main character, how could it be otherwise in a psychoanalysis, is not the narrator.

It's his mother. ”Sebastian is quite impressed by the harrowing family history as Kracht wrote it down.

(Here is the full review.)

CDU final: Friedrich Merz praises himself as an innovator - the size of the party expresses a clear internal election plan