In the race for the first delivery of corona tests for home, Aldi is now also involved. The discounter wants to bring the tests to the market this week - and thus ahead of the competition. In the race for the first delivery of corona tests for home, Aldi is now also involved.

The discounter wants to bring the tests to the market this week - and thus ahead of the competition.

- In the race for the availability of corona self-tests, the industry heavyweight Aldi is now also involved.

Aldi Nord and Süd want to add their own rapid antigen tests for at home to their range from March 6th.

The two companies announced this on Wednesday.

The tests are produced in Germany and have the necessary approval.

With this, the discounter would overtake the two drugstore chains Rossmann and dm.

dm is aiming for the start of sales on March 9th, Rossmann wants his tests to be in stores for three days.

The price for the Aldi promotional goods should be 24.99 euros and include a total of five tests.

The delivery amount will be limited to one pack per household, it said.

Dm and Rossmann had expressed themselves similarly beforehand.

Corona self-tests for at home: According to dm, the kits should also be available at Rossmann from next week

The company announced on Tuesday that the corresponding offer should go on sale in the middle of next week.

The prerequisite is that the supplier meets the deadline.

Rossmann is also “working flat out” to include further approved tests from other manufacturers in the range, it said.

The delivery amount will be limited to four units per household at the start.

It was only on Monday that dm announced that it would sell corona rapid tests for at home from next week, "probably" from Tuesday.

Other drugstores such as Müller are also in the starting blocks *.

Initially, dm and Rossmann left the prices for the self-tests open.

According to industry circles, however, they are likely to be between five and ten euros.

According to its own information, the Federal Institute for Drugs and Medical Devices (BfArM) has so far issued temporary special approvals for four products for use at home.

The samples are taken through a smear in the front nose and evaluated with the help of so-called extraction tubes and a test cassette.

Corona self-tests for at home: dm is rushing ahead and is now facing massive competition

"We currently have around 50 applications from other manufacturers for special approval," a spokesman for the Federal Institute for Drugs and Medical Devices (BfArM) in Bonn told Merkur.de * on Tuesday.

The legal hurdles are high.

According to the "Medical Product Law Implementation Act", the requirements for a temporary special approval include that the Paul Ehrlich Institute has already checked and approved the corresponding test for professional use.

To do this, the tests must also be “usable” for laypeople, i.e. just as easy to use as pregnancy tests, for example.

In addition, providers must enclose appropriate instructions for use in German and mark the test on the packaging for use by end users.

In addition, the providers must submit an application for market approval in the EU (CE seal).

dm is the first to push forward: having a corona self-test for home in just a few days

- The drugstore chain dm is about to start selling Corona * quick tests for its own use.

The corresponding tests of the Boson brand are expected to be available from March 9th, "initially online, then very promptly in around 2000 branches nationwide," a dm spokesman told

It is assumed that they will be the first company nationwide that can provide appropriate tests for their own use, it said.

"Schools and day-care centers should be able to be visited regularly again, which is why we will offer the tests as cheaply as possible," announced dm managing director Sebastian Bayer.

It is "important that life returns to normal as quickly and as much as possible."

The drugstore chain did not initially name specific prices for the Chinese manufacturer's test.

They are "currently still in talks".

Therefore, “at this point in time, no precise information can be given about the sales price,” said Bayer.

dm: Price should be between five and ten euros - is the federal government helping?

However, the price for a comparable quick test is between five and ten euros.

In industry circles, this means that the federal government could possibly also contribute to the costs.

But dm did not want to comment on this.

On Monday, dm did not want to comment on further details such as the delivery quantity.

The delivery amount has not yet been determined, as it is unclear “whether further self-tests will be permitted in the next few days.” However, they are working flat out to ensure “high availability”.

dm: Boson is one of four approved self-tests to date

The Federal Institute for Drugs and Medical Devices (BfArM) has so far issued special approvals for four products for use at home, including Boson.

During the self-tests, the test subjects insert a swab around 2.5 centimeters into their nose and take a swab.

The smear is then placed in an extraction tube.

The actual evaluation takes place via a test cassette.

The result is available after 15 to 20 minutes.

In addition to dm, other retailers are also looking into selling tests.

Edeka is also preparing appropriate steps, but has not yet announced a possible sales launch.

Lidl * and Rewe also announced that they are looking into expanding their range.

dm: Rapid tests are a central component in fighting pandemics

In the fight against Corona, rapid tests are a central component.

Above all, sectors such as retail, gastronomy and tourism, which have been particularly hard hit by the pandemic, have high hopes for corresponding applications in view of the months-long lockdown.

According to the industry, this would enable shops, restaurants and pubs to open more quickly and safely.

Corona rapid tests: Aldi with a bang - when will discounters and drug stores follow suit?

Aldi stands out from competition: From Saturday, discounters will be offering corona rapid tests across Germany

Aldi stands out from competition: Discounter is offering corona rapid tests throughout Germany this week 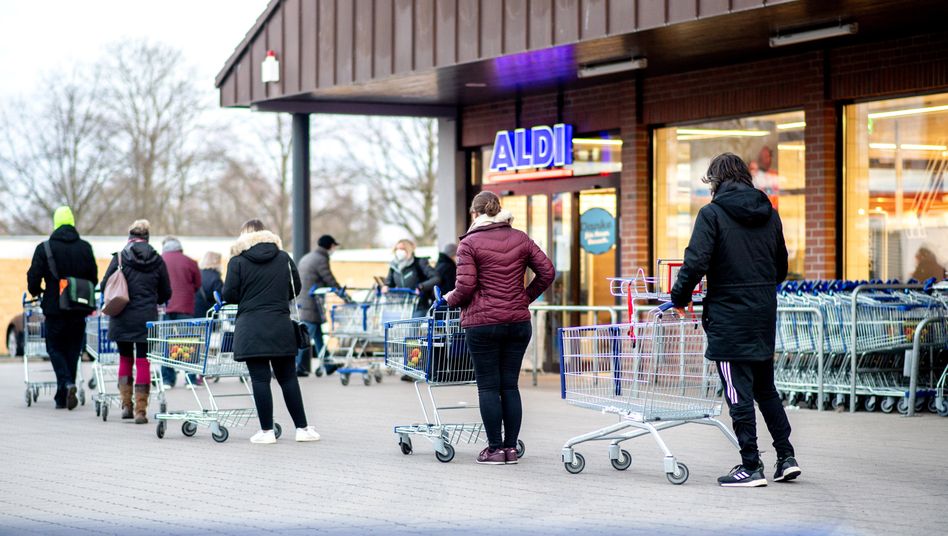 Corona rapid tests: This is the situation in the shops