The journey of homeless migrants from the Canary Islands 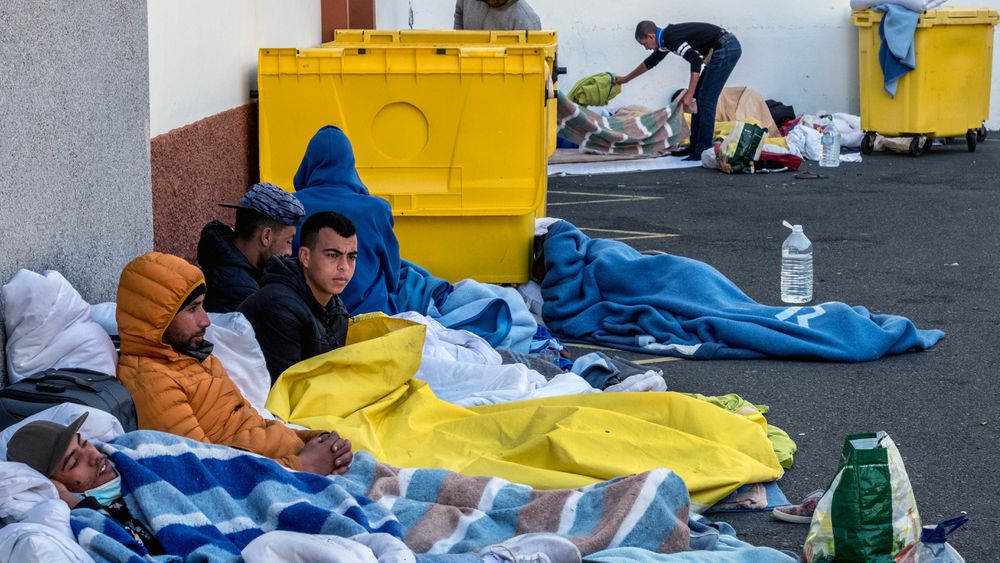 A group of 64 Moroccans has become the latest example of the ordeal that awaits many migrants once they set foot in the Canary Islands.

Last Friday they lost their place in the Canarias 50 reception center, in Las Palmas de Gran Canaria, after refusing to be rehoused in a new tent in this camp run by the Red Cross.

A journey began for them that led them to sleep that night at the gates of the old military infantry barracks and, the next, on the Confital beach, from where they were evicted by the Police and, half a dozen of them, transferred to the Headquarters Canary Islands Police Superior.

Since Sunday they have been sleeping on the floor of the parking lot of the San Pedro parish, in the humble neighborhood of La Isleta.

On Monday they requested his re-entry into the Red Cross center, but the request was denied.

Streets, warehouses, ravines and beaches of Gran Canaria have been filled in recent months with people who have been evicted from reception resources.

Some were expelled by the Red Cross for bad behavior.

Others decided to go out on their own, fed up, they say, of the overcrowding, the living conditions and the poor prospects on the island.

They live off charity, flee from the police, and some meet death.

This Tuesday, the corpse of a migrant appeared in a street near Las Canteras beach for reasons that have not yet been clarified.

Last week, a Maghreb who slept in a garbage container in Playa del Inglés was about to be crushed by a waste collection truck.

"I don't want to be here," says Bilal, a 26-year-old Moroccan, one of those expelled on Friday in rough Italian.

"I have my family in Grossetto [city in Tuscany] and that's where I want to go."

Likewise, Mustapha, 39, wants to return to Verona, where he has worked in the fruit picking.

Both have come up against the strategy of the central government, which is supported and financed by the EU.

that do not meet the best conditions.

Thus, with the aim of discouraging new arrivals and facilitating return, the Executive maintains 9,000 people on the islands, to which some 2,600 minors are added.

Despite being in an irregular situation, these people are free throughout the territory of the State, unless restricted by the Police for 72 hours or by a judge.

In this sense, there are currently 69 people in the CIE of Barranco Seco, according to the head of the court of instruction 8 of Las Palmas that supervises the facilities, Arcadio Díaz Tejera.

66 of them are Moroccan.

"The purpose of the reception centers is to avoid the concentration of people and unhealthy conditions," says Patricia Fernández Vicens, a lawyer for the Coordinadora de Barrios association in Madrid.

"The uniqueness of the Canary Islands is that the devices that have been opened have a very low reception standard, in which rest, privacy or, on some occasions, food is not guaranteed."

In the lawyer's opinion, the reception program is being used for a different objective: to detain the immigrant in the Canary Islands.

“The aim is to wear down people to send a message.

In other words, we find institutional abuse as a solution ”.

Since last Sunday, agents of the National Police have surrounded the Parish of San Pedro several times to carry out identifications and arrests of those migrants they intercepted.

Some were kept standing for a time that could exceed an hour, others were transferred to the central police station of the city.

"It is our job to ensure citizen security and carry out identifications to control people who are on the street," say police sources, who deny that there is a "persecution of migrants."

Inside the church fear spreads.

"We do not want to go out in the street in case they arrest us and send us back to Morocco," say the Moroccans in the Parroquia de San Pedro, in the La Isleta neighborhood.

"Some colleagues have been detained since Sunday."

One of those arrested, whose admission to the CIE was rejected by Judge Francisco Javier García García, has requested asylum.

The director of Social Inclusion of the Red Cross, José Javier Sánchez Espinosa, explains the refusal of readmission of some migrants.

"Voluntarily leaving humanitarian reception entails giving up this aid and being left on the streets."

The spokesman assures that the problem reached extremes of violence, with "threats and attacks."

“His reinstatement would not be possible.

We must give service to the other 315 people and to the others that we can take in until 1,200, and if we readmitted them we would be putting at risk not only the operation and management of the camp, but even the threatened and attacked people ”.

The expelled migrants have denied at all times that there was violence on their part.

and a deterioration of coexistence in the neighborhood," he explains, "given that these people tend to stay close to reception centers, which in themselves they are usually in impoverished areas ”.

It is the example of 41 of the 64 migrants who left the Canary Islands 50 last Friday.

From that day on, they depend on the punctual help of municipalities such as Las Palmas de Gran Canaria, which unload responsibilities in the central Government ("these people leave voluntarily and the City Council offers to cover their basic food needs, but accommodation is competence of the Government Delegation ”, affirms a spokesperson), and of the charity of citizen platforms such as the recently constituted Somos Red or that of the priest responsible for San Pedro, Jorge Hernández Duarte, a parish that has a soup kitchen that provides eat daily more than 75 people.

"A weight is being placed on us that we cannot bear," says Hernández Duarte, who was no longer able to accommodate the Maghrebis on Tuesday night.

"There is no project on the part of the Administrations to see what is done with this problem, which makes it difficult for us to act and prevents us from operating," he argues.

"And also, all these problems become greater during the pandemic: the result in the Canary Islands is that it is causing a struggle of the poor against the poor."

Around 500 migrants who have arrived irregularly to the Canary archipelago from the African continent are pending to determine whether they are adults or minors, as reported by the Minister of Public Administrations, Justice and Security of the Government of the Canary Islands, Julio Pérez.

This has been stated in the parliamentary committee in response to a question from deputy Jana María González, who pointed out that there are significant delays in conducting tests to determine the age of majority of migrants who arrive on our shores in an undocumented manner. .

In his response, Julio Pérez indicated that the resources requested by the Prosecutor's Office have been increased and assured that the delays are caused by the complexity of the evidence itself.

He also said that the Canary Islands received almost 1,800 minors last year and not all of them are doubtful. 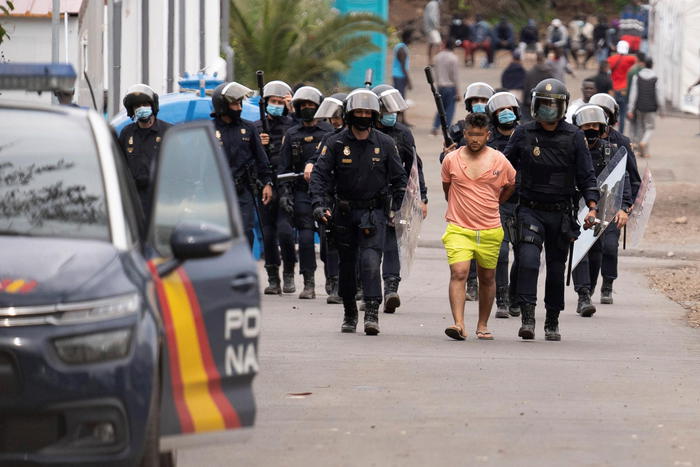 Migrants: clashes in the Tenerife field, 8 arrests and injured 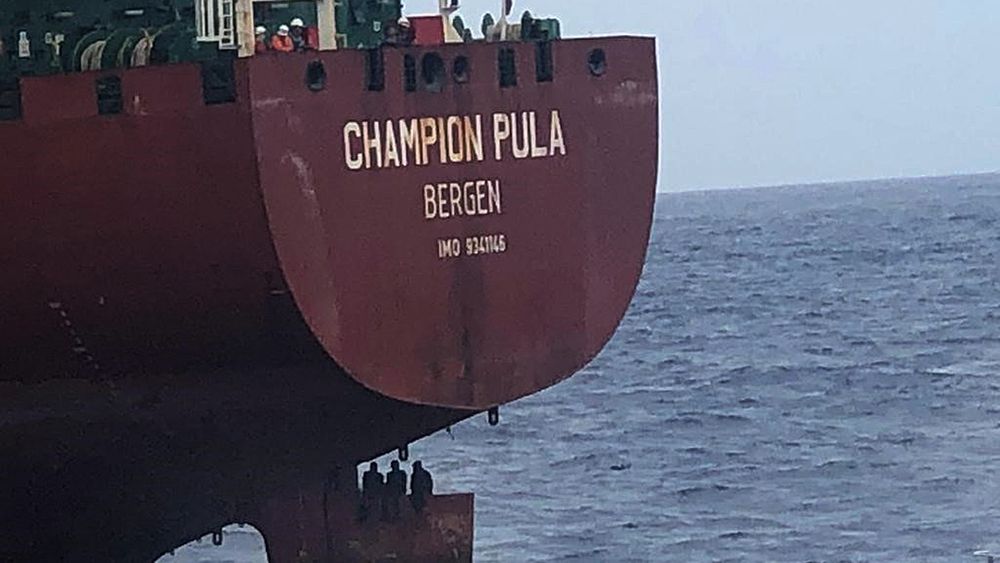 A teen's journey to Spain's Canary Islands: 15 days on top of a tanker's rudder

The journey of homeless migrants from the Canary Islands 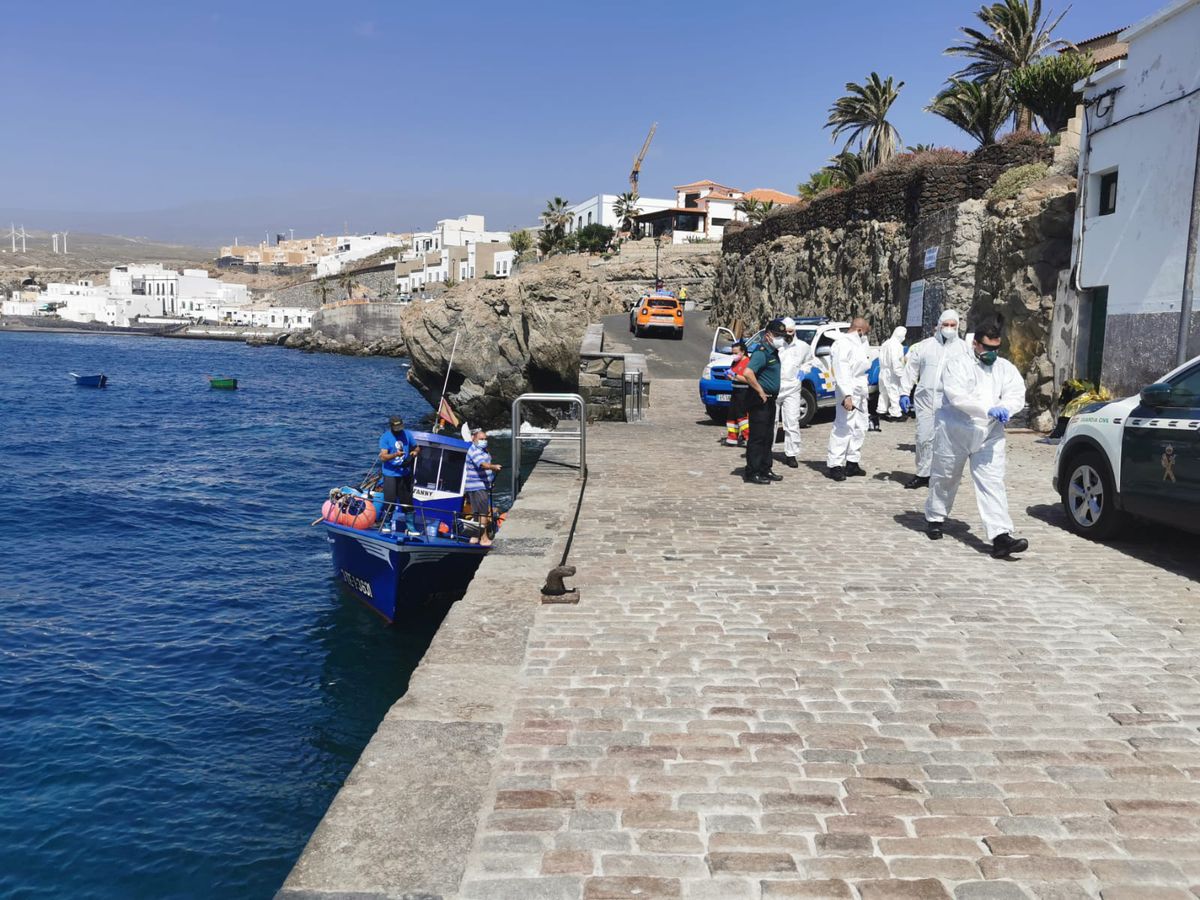 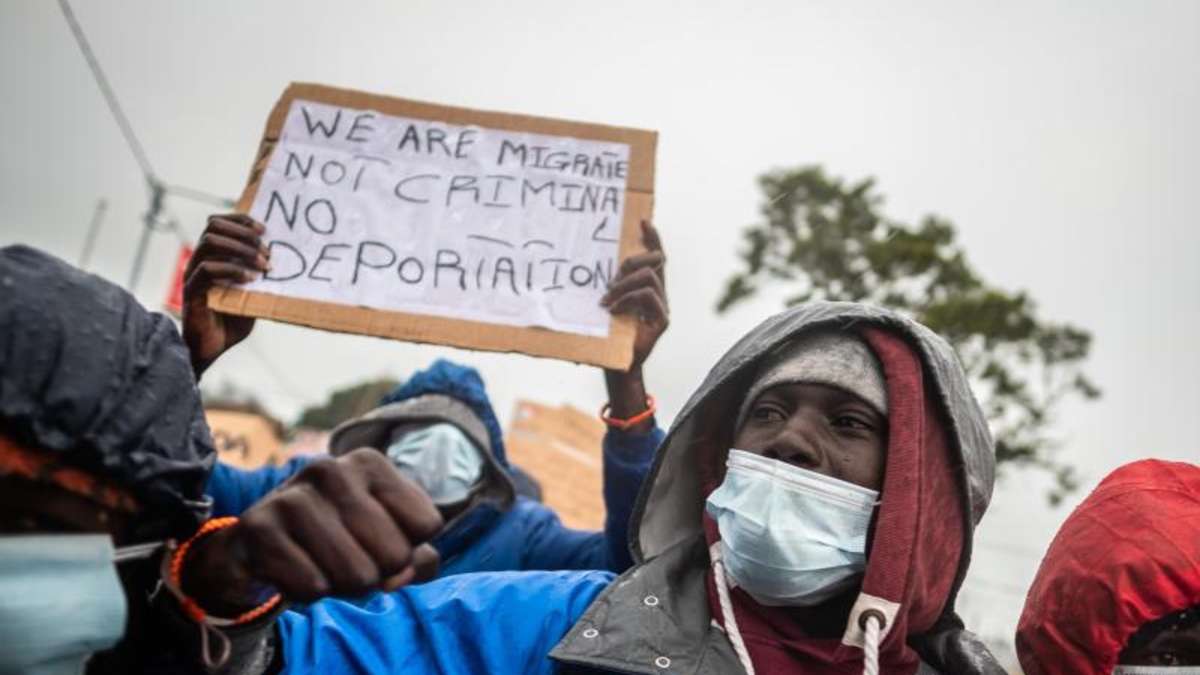 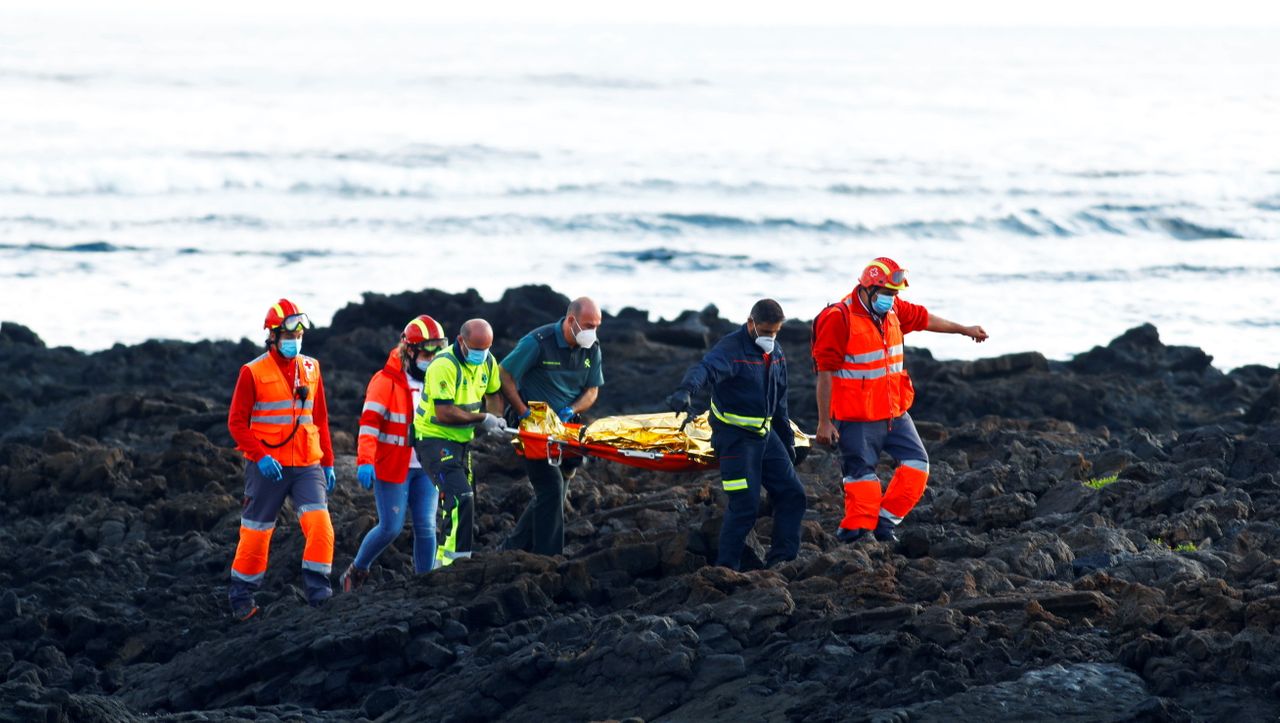 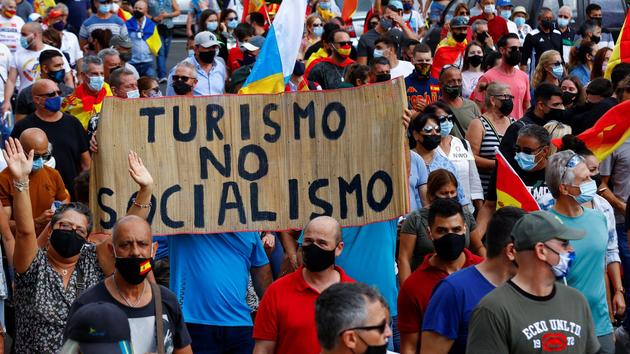 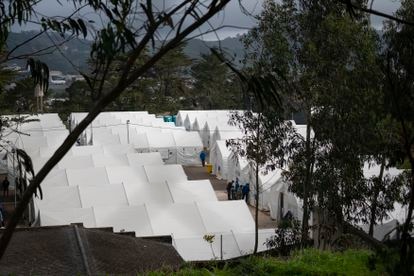