After years of harsh criticism of the military prisons, which included poor physical conditions and abusive treatment by the staff, incidents of rebellion and poor medical care - the Army Personnel Division presented the Neve Tzedek prison. The upgraded facility will replace Prison 4 and 6, and can accommodate about 1,000 soldiers and 300 incarceration staff

With a rehabilitation system and a mental health center: the IDF introduced a new detention facility

After years of harsh criticism of the military prisons, which included poor physical conditions and abusive treatment by the staff, incidents of rebellion and poor medical care - the Army Personnel Division presented the Neve Tzedek prison.

The upgraded facility will replace Prison 4 and 6, and can accommodate about 1,000 soldiers and 300 incarceration staff

In the video: A peek into "Neve Tzedek" - the IDF's new detention base (Photo: Dotz)

The IDF Personnel Division this week introduced a new and improved detention facility at Beit Lid Camp, which will replace Prison 4 and Prison 6. This, after years of harsh criticism of military prisons, which included poor physical conditions, abusive treatment by staff, rebellion incidents and rehabilitation processes And the facility, which has been named Neve Tzedek, or Prison 10, will be the main base for defectors and dodgers in the IDF.

The improvement in physical conditions in the new detention facility is already being felt in the detention spaces that have been built, with 4.5 meters per imprisoned soldier.

There is a shower and toilet, by law, and in each wing also a dining room and a classroom.

The detention base can accommodate 940 inmates.

There has also been a change in the envelope provided by the prison to prisoners.

There are about 300 staff members throughout the detention base, including inmates, prison commanders, platoon commanders, company commanders and other officers at the base.

Structures were also built for an inmate reception company, a headquarters building and a staff welfare compound.

The first aid button that accompanies anywhere and anytime

A workshop was built at the base of the detention center, where the inmates engaged in various trades according to the needs of the army.

The IDF explained that the detention base has a "resilience center" that includes a set of conditions of service, medicine (including specialist medicine), mental health and a set of return factors for proper service, which diagnoses the inmates And gives them an option to return to service and an exact match to the character.

The incarceration base is classified into four different wings called "hierarchies."

In the first tier, there are unit guard rooms with soldiers imprisoned for up to 28 days.

These are soldiers who have committed minor offenses up to three times.

In the second tier are guard rooms for detainees facing trial or imprisoned for a minor fourth offense, and up to 28 days in jail.

In the fourth tier is the Prison Service for inmate soldiers who have been sentenced to more than a year in prison or particularly violent prisoners.

About a thousand inmates and 300 faculty members.

The prison is also divided into several different companies.

The companies are divided into different degrees of offense.

One of the purposes of the prison base is psychological assistance, and tailoring a personal response to the needs of the prisoner.

To this end, the soldiers and commanders at the facility go through workshops for the incarceration staff, which include locating and treating the distress signs of inmates.

Another goal is to create an educational solution, which includes assistance with high school graduation studies, and workshops tailored to each inmate.

As part of an integrated technology building a base, all operations room and in the company has the ability to control the lighting, electricity, TV and CCTV cameras and central control central unit which controls the facilities unit and public areas.

Wing personnel Set goals and adapt confinement and professional bodies envelope to help with the release of the soldier from prison , And in an attempt to avoid problems in reintegration within the military unit and reduce back to jail for further offenses.

"Real and painful distress": this is what every Israeli must know about post-trauma - Walla! health

New development in the classified unit: the technology that will prevent the theft of agricultural land - Walla! news 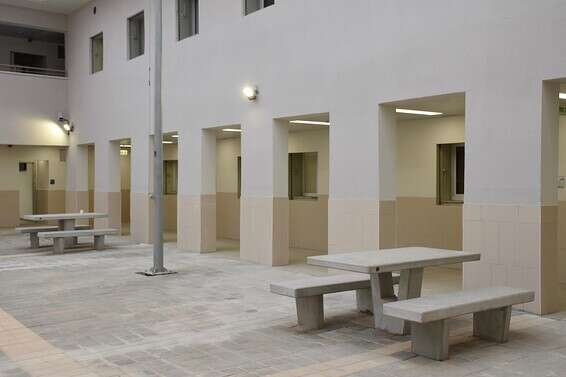 Weapon Kill Investigation: Commando fighter fought with all his might, there was no value failure - Walla! news

Accelerates quickly towards a checkpoint without guards: documentation from the break-in to the Nabataean base - Walla! news

Improvement in Itzik Saidian's condition: "He is breathing on his own" - Walla! news

Itzik Saidian continues to fight for his life: "The people of Israel are called to pray for him" - Walla! news