Netanyahu's attempts to drag the emirates into the campaign succeeded in ousting Sheikh Muhammad bin Zayed, who decided that the prime minister would not set foot in Abu Dhabi until the election. To Sudan

The billionaire spin and the heir apparent to the campaign: this is how Netanyahu angered the Emirates

Netanyahu's attempts to drag the emirates into the campaign succeeded in ousting Sheikh Muhammad bin Zayed, who decided that the prime minister would not set foot in Abu Dhabi until the election. To Sudan

In the video: The Prime Minister makes it clear that he will align himself with Jordan and he will visit Jordan (Photo: GPO)

It is not easy to anger the discourse of Muhammad bin Zayed, the regent of Abu Dhabi and the de facto ruler of the UAE.

One of the features known to him is his composure and comfortable temperament.

But last week, Prime Minister Benjamin Netanyahu managed to get Ben-Zayed out of his mind and make him decide that until the election, and perhaps for a considerable period after that, he will not set foot in Abu Dhabi, according to three Israeli and Western sources.

The main implication of this decision is the suspension of a political summit between Israel and Sudan that was supposed to take place in Abu Dhabi in the presence of Regent Muhammad bin Zayd and a senior member of the Biden administration - apparently Foreign Minister Anthony Blinken.

The goal was to sign at this summit an official agreement to establish diplomatic relations between Israel and Sudan, said American sources involved in the matter.

The suspension of the summit was first reported this morning in Yedioth Ahronoth.

That Netanyahu proposed holding this summit in a telephone conversation with Muhammad bin Zayed about three weeks ago.

Ben-Zayed said he would be happy to host Netanyahu and the Sudanese leader for a signing ceremony but he wanted there to be a senior American presence.

The emirates offered the idea to the Americans and they agreed but asked to hold the event only after the election.

The date of the summit was supposed to be in early April, but on Wednesday the emirates informed the White House that in light of Netanyahu's conduct and his use of them in his election campaign, they are suspending the summit until further notice.

It is estimated that the event will indeed take place, but at a later date, after the political situation in Israel becomes clear and after Netanyahu finds a way to appease the regent, Muhammad bin Zayed.

United Arab Emirates: We will not take part in the Israeli election campaign

He claimed that the emirates invest in Israel only because he heads the government.

For the past two weeks, Netanyahu has been trying to obtain an invitation to visit Abu Dhabi before the election.

Many in the emirate leadership thought it would be a mistake to accept him before the Israeli election.

But Netanyahu exerted heavy pressure and even sent Mossad chief Yossi Cohen to arrange a visit for him.

Cohen sat in Abu Dhabi for three consecutive days, with all his energy invested in receiving a green light from the Emirates' national security adviser, Sheikh Tahanon Ben Zayed, for Netanyahu's visit.

Eventually the pressure did its thing.

The emirates knew that Netanyahu was only coming to be photographed for his election campaign, but preferred to turn a blind eye so as not to create tension in the relationship.

But then the crisis with Jordan over the regent's visit to the Temple Mount led to the cancellation of the trip to Abu Dhabi.

Netanyahu did not give up, he continued to push for a visit even before the election.

At the same time, he made the UAE a central part of the Likud's campaign.

He began releasing spins on the promise he allegedly received from Ben-Zaid for a $ 10 billion investment in Israel.

The truth is that the issue did come up on Netanyahu's initiative, in a telephone conversation between him and the regent last week, and the emirates even published a press release on the subject.

The motivation of the emirates to examine investments in Israel was purely economic.

They were shocked to see that for Netanyahu this is a completely political issue and that he is using the issue of investments from the Emirates for the Likud election campaign.

Netanyahu even went further and claimed that the emirates invest in Israel only because he heads the government.

The emirates began to receive questions about Netanyahu's remarks.

They explained to anyone who wanted to hear that the investment fund Netanyahu was talking about had not yet been established and that not a single dollar had been allocated to the issue - let alone 10 billion.

In Abu Dhabi, however, they kept a low profile and said nothing in public.

On Monday, Netanyahu went on the air in his favorite hostel - Yaakov Bardugo's radio program on IDF radio. Netanyahu even explained the reason for this spirit of volunteering - Ben-Zayed, he claimed, told him that he believed in his economic policy.

It is not easy to anger him, but Netanyahu succeeded.

Israeli and Western sources claim that in terms of the statements, Netanyahu's statement was the straw that broke the camel's back.

Abu Dhabi was willing to restrain Netanyahu's desire to have a common picture before the election, and even to ignore the imposition of a peace agreement on the Likud campaign, but when the prime minister distorted the regent's words for his political needs, it was a crossing of a red line.

After five days of restraint, the emirates decided on Tuesday night to respond.

The first move was a statement on behalf of Industry Minister Sultan Jaber, one of the most influential people in UAE economic policy.

Jaber emphasized that the investment in Israel is only being examined, and that if it does occur, it will be on the basis of economic viability and not on the basis of support for one politician or another.

"We are in the very initial stages and there are many issues that need to be examined before we make investments in Israel," he said.

In recent days, the Netanyahu bureau has not responded to press questions regarding a possible trip to the United Arab Emirates.

On the other hand, Netanyahu canceled the campaign events planned for him on Thursday and instructed some Likud ministers that he was planning a trip to Abu Dhabi.

A purely economic motive for investing in Israel.

The second step in the statement was to inform Netanyahu most clearly that until a new announcement, his visit to Abu Dhabi will not take place.

Netanyahu understood that he had to carry out damage control.

His office suddenly replied to reporters, claiming that no visit to the UAE was planned at all.

Netanyahu himself appeared on Gali Israel radio and claimed that the story of the trip to Abu Dhabi was a spin that he did not know who distributed it.

This of course was not true.

But then came the final stage in the UAE response.

Adviser to the President of the United Arab Emirates, Anwar Garash, who until a few weeks ago served as Minister of Foreign Affairs, attacked Netanyahu on Twitter without naming him.

"The purpose of the Abrahamic Agreements was to build a strategic relationship of peace and prosperity with Israel," he wrote.

"The United Arab Emirates will not take part in the Israeli election campaign. Neither now nor in the future."

Just six months after the announcement of normalization with the UAE, Netanyahu's political and legal battle for survival created a first serious crisis with the UAE.

Muhammad bin Zayed's anger will end at one point or another, but what he learned about Benjamin Netanyahu last week - he will not forget.

Biden to the Emirate of the Emirates: Normalization with Israel is of strategic importance - Walla! news

Despite Netanyahu's statements, in the cool of the emirates: investing in Israel in a preliminary examination only - Walla! news

Despite Netanyahu's statements, in the cool of the emirates: investing in Israel in a preliminary examination only - Walla! 2021 Elections

Litzman announced: I will recommend to the president to impose the government train on Netanyahu - Walla! 2021 Elections

Netanyahu is trying to organize a visit to the United Arab Emirates and Bahrain ahead of the election - Walla! 2021 Elections 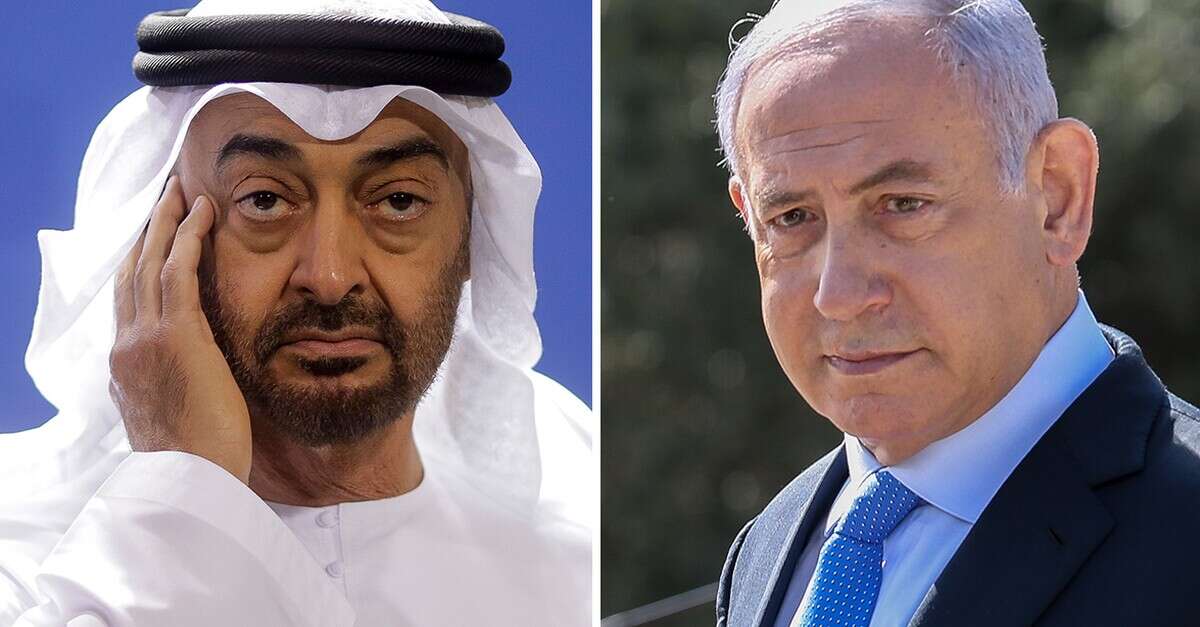 History: Prime Minister Netanyahu will take off tomorrow for his first visit to the United Arab Emirates | Israel Today