The European Medicines Agency EMA announces its decision on AstraZeneca's corona vaccine. Germany will inoculate the vaccine again from Friday. The news ticker. Germany will inoculate the vaccine again from Friday.

The European Medicines Agency has made its decision on Astrazeneca's corona vaccine.

After Italy announced in the afternoon that it would be vaccinating again with AstraZeneca, Germany followed suit in the evening: From Friday onwards, the vaccine will be vaccinated again in this country.

This was announced by Federal Health Minister Jens Spahn in a specially convened press conference.

"The campaign must now move on quickly." It is always about weighing the benefits and risks of vaccines.

There is a certain "duty of precaution" to people in the country, said Spahn, explaining the interim vaccination break.

The decision to suspend the vaccinations with AstraZeneca was not an easy one for him.

AstraZeneca vaccine: Lauterbach does not expect any long-term loss of confidence

confidence in the AstraZeneca vaccine.

"Not much will be left of the damage to trust in the AstraZeneca fabric in the end," he told the news portal

"We will come to terms with the fact that there are also serious side effects in rare cases." Lauterbach emphasized that the real problem is the lack of vaccine.

There is still too little of it, according to the 58-year-old.

The European Medicines Agency recommends continuing the vaccinations against the coronavirus with the vaccine from AstraZeneca.

The EMA announced this on Thursday afternoon in Amsterdam.

According to the EMA, however, there is “so far no demonstrable connection” between the cerebral vein thrombosis and vaccinations with AstraZeneca.

On Monday, the German health expert Karl Lauterbach (SPD) said on ARD's “hard but fair”: “The thrombosis is a complication of the vaccine.

That will come out of it.

I reckon that the exam will take about a week and that a clear warning will be given afterwards. ”Neither one nor the other happened now.

On the contrary: The active ingredient has already been vaccinated to more than 18 million people in the EU and Great Britain and there have been almost no reports of serious side effects, said the EMA.

Rather, the vaccine has a high to very high effectiveness, the explanatory statement continues, and AstraZeneca is of great importance for the corona vaccination campaign.

The recommendation summarized: Vaccination should continue because the benefits are many times greater than the possible risks.

Here you can follow the press conference again (video)

Corona vaccine from AstraZeneca: EMA makes a recommendation - it should continue to be vaccinated

Update, 5:27 p.m.: That's it with the EMA press conference in Amsterdam!

Update, 5:23 p.m.: Is there a risk group with a view to thrombosis and vaccinations?

“Younger women in particular,” is the EMA's answer, at the moment it is “but still too early” for an unequivocal statement.

So it could be that "in this population group in some countries more was vaccinated".

That too "still needs to be examined in detail".

Update, 5:20 p.m.: How did the cerebral vein thrombosis come about?

At the moment the EMA does not see enough information "to issue a warning".

Update, 5.15 p.m.: The result: The European Medicines Agency EMA recommends the continuation of vaccinations with AstraZeneca in the European Union (EU) and thus also in Germany.

Sabine Straus: "It was not possible to establish a clear connection." The thromboses and the vaccinations are not properly connected to each other.

However, there should be a note in the package insert and doctors and nurses should be reminded of this again.

Update, 5:10 p.m.: One of the EMA reported that the assessment had been worked on around the clock.

In particular, the blood clots were put to the test as a side effect.

Again and again there is talk of "extremely rare cases", "in the first four to 17 days after vaccination".

Once again for classification: In individual cases, cerebral vein thromboses were found after vaccinations with AstraZeneca.

Update, 5:06 p.m.: According to the EMA, the side effects are always understood and tracked.

"This vaccine has shown at least 60 percent efficiency in preventing Covid-19," she says, explaining that other data would show a much higher effectiveness.

The EMA experts worked intensively for days to come to an assessment.

Medical experts on the subject of thrombosis should also be heard.

“When you vaccinate millions of people, the possibility of serious side effects cannot be ruled out.

It's about quickly identifying it and making a link to the vaccination, ”Cooke continues.

Update, 5:03 p.m.: The Risk Assessment Committee had come to a conclusion: “This is a safe and good vaccine.

The protection it offers people from hospital stays outweighs the above.

There have been a number of very rare and very serious cases of Hinr thrombosis, ”said EMA Director Emer Cooke.

Based on the evaluations of data and hospital reports, a connection could not be ruled out.

Therefore, the EMA suggests that there be a product label of the side effect so that it can be better addressed.

Update, 5:02 p.m.: It starts with the EMA press conference in Amsterdam!

Corona vaccinations with AstraZeneca: Concerns in Germany with regard to the vaccine

.: The EMA press conference on the AstraZeneca vaccine is about to start.

We are here live for you!

The EMA has commented - at least on when the press conference on AstraZeneca should take place in the truest sense of the word.

The EMA press conference is not yet running.

Apparently there will be further advice in Amsterdam.

.: Bavaria's Prime Minister Markus Söder (CSU) is very concerned that AstraZeneca in Germany will still be accepted by the majority of citizens even if it is approved by the EMA.

The Franconian therefore brings vaccinations "at his own risk" into play.

"I wouldn't throw it away either, even if it wasn't allowed," said the CSU boss this Thursday after the digital country conference in Munich.

Corona vaccinations with AstraZeneca: EMA press conference in the afternoon

This is the latest version. We will keep you up to date.

After the conference of the heads of government of the federal states there is a press conference with Berlin's Governing Mayor Michael Müller (SPD) and Bavaria's Prime Minister Markus Söder (CSU).

Both heads of government at the state level are emphatically promoting trust in and further vaccinations with the active ingredient from AstraZeneca against the insidious corona virus.

In addition, both politicians announced that the postponed vaccination summit between the federal and state governments should be rescheduled for tomorrow, Friday.

In mid-March, the UK had already given more than 25 million people a primary vaccination against the coronavirus.

For comparison: According to the

of Health, there were 6.97 million first vaccinations in Germany on March 18.

And while there are major concerns about AstraZeneca in the Federal Republic of Germany, vaccinations between London, Cardiff and Manchester are what AstraZeneca has to offer.

“The UK Medicines Agency thinks it is safe.

And it saves lives, ”said Great Britain's Foreign Minister Dominic Raab in an interview with

Are the side effects of AstraZeneca too risky?

The European Medicines Agency (EMA) has been investigating this question in the past few days - and will probably comment on it on Thursday.

Meanwhile, the Federal Ministry of Health announced that there are now 13 reported cases of blood clots (thrombosis) in cerebral veins in relation to vaccinations with the active ingredient against Corona.

Can the public's concerns be allayed?

More and more points about the EMA decision on vaccinations with AstraZeneca are coming out.

And the details are tough.

As the head of the North Rhine National Association of Statutory Health Insurance Physicians, Frank Bergmann,

It therefore does not rule out restrictions such as vaccinations with AstraZeneca "for example only for certain age groups or, for example, without using the pill at the same time".

Corona vaccine from AstraZeneca: Thromboses after vaccinations are examined by the EMA

Munich / Amsterdam - There were plenty of discussions.

Once again in the coronavirus pandemic in Germany.

This time when Federal Health Minister Jens Spahn (CDU) * announced the temporary vaccination ban with AstraZeneca in Germany due to concerns about possible side effects of the AstraZeneca corona vaccine.

Previously, there had been seven thrombosis cases after vaccinations with the active ingredient from the Swedish-British manufacturer - including social uncertainty.

This Thursday (March 18) the European Medicines Agency EMA wants to make its recommendation for the member states of the European Union (EU).

Even in advance, the first findings leaked through after checking the previously available data on the vaccinations with AstraZeneca.

(behind a payment barrier) reports, 15 cases (eleven women, four men) were noted in which vaccinated people had a so-called deep vein thrombosis.

However, there is no discernible trend.

Even more: The thrombosis cases registered so far are "significantly lower than the expected number of events".

So it suggests a recommendation to continue vaccinating with the agent.

developments regarding the AstraZeneca vaccinations here in the news ticker.

Lockdown decision made? Merkel is apparently already thinking of an extension 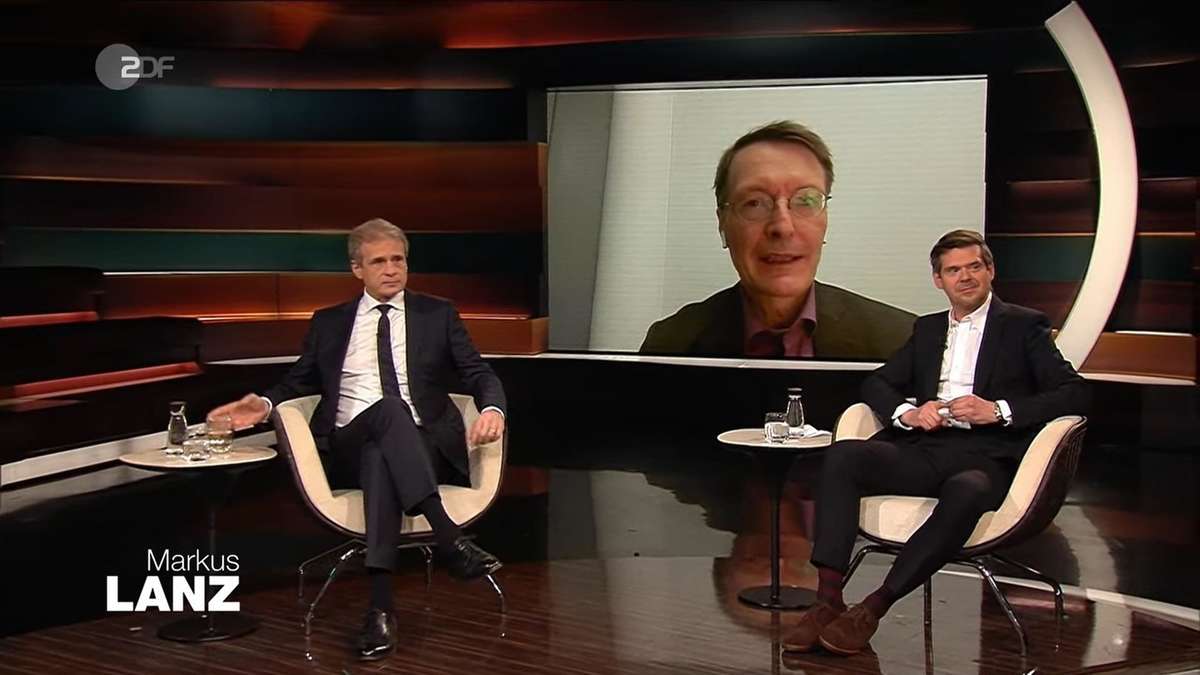 Lauterbach sees the Astrazeneca stop as a big mistake: "Vaccination strategy can collapse"