Within 24 hours, 1,789 new corona infections and 63 further deaths were recorded in North Rhine-Westphalia.

That comes from the data of the Robert Koch Institute (RKI).

NRW Prime Minister Armin Laschet (CDU) wants to implement the emergency brake "one to one" at the Corona openings.

Laschet emphasized this after the federal-state summit on Tuesday morning.

The most important decisions after the federal-state marathon:

Prime Minister Armin Laschet (CDU) has massively criticized the federal government for removing Mallorca from the list of risk areas and lifting the travel warning.

"Now is not the time to travel," said Laschet early Tuesday morning in Düsseldorf after almost twelve hours of federal-state consultations.

Because cross-border travel in particular carries the risk that even more dangerous coronavirus variants than the British mutant could spread in Germany.

"Now is not the time to travel"

The lifting of the travel warning for Mallorca had also led to many discussions in the federal-state talks, because "there is an unequal treatment here with German tourist destinations," said the CDU federal chairman.

You could have “saved yourself” that if you had waited until after Easter.

But now many people would meet on Mallorca.

He expects the federal government to ensure that the airlines are obliged to test the Mallorca returnees before they take off from the island and that the vacationers will not bring the virus back to North Rhine-Westphalia.

Transport Minister Hendrik Wüst (CDU) had taken precautions and talked to the managing directors of the large NRW airports in order to “prepare modalities for tests even after landing,” said Laschet.

"And they will do that too."

The state parliament of North Rhine-Westphalia actually reacted immediately to the judgment of the OVG.

Just hours after the retail restrictions were overturned, the rules are back in effect.

An adapted corona protection ordinance was issued for this.

“The restrictions on the retail trade, which the Higher Administrative Court expressly classifies as overall proportionate, remain in place,” said the Ministry of Labor, Health and Social Affairs. “This applies above all to the restrictions in shops that have only been announced since March 8th Appointments ("Click and Meet") and a person limit of one customer may open 40 square meters of sales area. "

The country pressed the reset button in a flash process.

The rules only change for stationery stores, bookstores and garden centers.

Since the court had seen the easing of treatment for these areas as unequal treatment to other retailers, these markets are no longer allowed to receive customers without an appointment.

"Because the Senate has set all the rules for retail except law enforcement, you are allowed to buy now available in all shops in NRW without an appointment shopping and without customer limit per square meter," says the spokesperson of the Higher Administrative Court, Gudrun Dahme opposite the

For SPD parliamentary group leader Thomas Kutschaty this is not an acceptable situation.

“We still need a new corona protection ordinance today that eliminates the technical mistakes made by the state government,” he demands, “otherwise there is a risk of chaos in our business.

We will therefore request a current hour in the state parliament on this important topic. "

The Higher Administrative Court had already indicated in an initial notification that the state was free to create a new regulation even at short notice.

The Senate sees no fundamental problem with the restrictions, only the differentiation between “basic needs” shops and other shops was not sufficient in the now overturned ordinance and therefore inadmissible.

The corona restrictions in retail are not compatible with the principle of equal treatment and will no longer apply after the judgment of the Higher Administrative Court.

But are they fundamentally disproportionate?

In view of the consequences that another uncontrolled increase in corona infections could have, the restrictions on fundamental rights for retailers are justified.

A company spokesman for

welcomes the verdict and hopes: "We are counting on it to have a signal effect beyond North Rhine-Westphalia."

"Everything is going to be changed again today anyway", Kik boss Patrick Zahn announced to the German press agency that he would not expect any major changes in his stores and referred to the ongoing federal-state conference.

Nevertheless, he strikes out for a sweeping blow.

The judgment shows how headless and arbitrary the decisions were made during the corona pandemic.

Zahn anticipates a wave of lawsuits following the pandemic, in which traders would seek compensation for the inappropriate closings.

As the court announced on Monday, the customer limit per square meter and the previously required appointment booking no longer apply.

In the opinion of the court, the regulations violate the principle of equal treatment.

about the background to the decision.

.: In Wuppertal, Düren and the Oberbergischer Kreis, classroom teaching in secondary schools is suspended due to the high corona incidence.

Exceptions apply to final classes and elementary schools - but the latter are also closed in the Oberbergisches Kreis.

But only a 7-day incidence above the 100 mark does the NRW state government see enough reasons to close the secondary schools again.

But even then, they do not grant every application, reports the

Corona in NRW: "School closings are only the last resort"

"School closings, embedded in an overall concept, can make a contribution to infection protection on site, but may only be the last and not the first and only means of choice," said the state government in Düsseldorf last week.

All other measures in other areas of public life must have been examined beforehand.

Several districts in North Rhine-Westphalia wanted to close the school opening, but had been stopped by Düsseldorf.

.: Cologne is not in a good position on the day of the Corona summit.

In the whole of North Rhine-Westphalia it is 106.6 this Monday.

Before the federal-state consultations with Chancellor Angela Merkel (CDU) this Monday, stricter corona requirements are already in place in the metropolis: In zones where masks are required, only surgical or FFP2 masks have to be worn instead of the previously permitted everyday masks.

The mayor of Cologne, Henriette Reker (independent), announced this to journalists on Friday.

A negative corona test is now required for visiting museums and zoos as well as hairdressing visits *.

100 is currently the incidence mark for the “emergency brake”, ie the withdrawal of easing.

Cologne is above it for the eighth day in a row today.

The corona incidence in Cologne was just above the "emergency braking" value of 100 for several days in a row.

Our first report from March 21st

: Düsseldorf - On Monday, March 22nd, the federal and state governments will meet again for further deliberations on the corona measures.

In North Rhine-Westphalia, the incidence is currently above the threshold of 100 again. According to information from the RKI in the state, 103.5 people per 100,000 inhabitants were infected with the coronavirus within seven days (as of Sunday morning).

The metropolis of Cologne has meanwhile also announced a tightening of the corona requirements, albeit to a lesser extent than in the city-state of Hamburg.

As of Monday, only surgical or FFP2 masks may be worn in Cologne zones where masks are required instead of the previously permitted everyday masks, as Mayor Henriette Reker (non-party) announced after a meeting of the crisis team.

The incidence value in Cologne was just above the emergency braking value of 100 on Friday for the fifth day in a row.Reker emphasized in front of journalists that in the event of a further increase in the state-wide incidence in North Rhine-Westphalia, she would expect information from the state about the further plans of the next week State government. 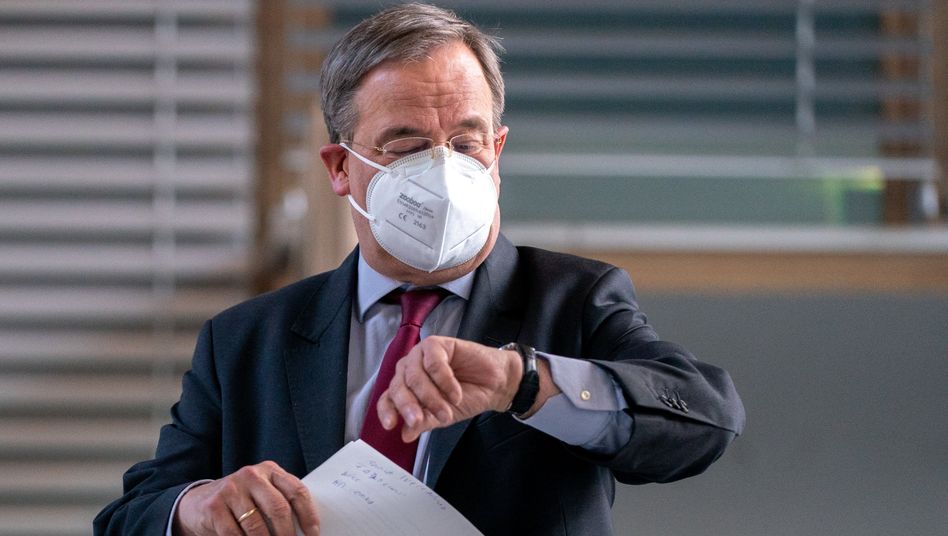 Corona summit with Merkel live: first decisions on unvaccinated people have apparently been made

Corona summit: Söder and Laschet are heading for expensive mandatory tests - but a way out is also mentioned