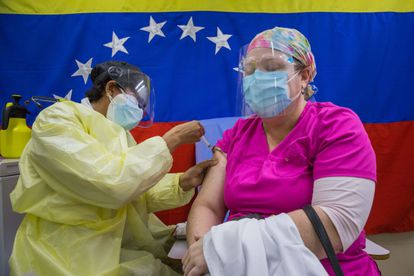 The Google Trends curves may be more adjusted to the current situation of the covid in Venezuela.

The tool shows how searches with the word oxygen have skyrocketed in the last month.

Official reports show an increase in cases, but below the perception on the street, where desperate requests for breathing equipment and a hospital bed are growing, and because of the multiplication of fundraising campaigns to help the sick. .

In the last three weeks, positive cases of coronavirus have gone from a little more than 700 to almost 1,800 a day, the highest number reported in the country that does the least molecular tests in the region, as the Pan American Health Organization has warned ( OPS).

This is how Venezuela is going through its second wave of infections, one of greater expansion and impact, in a scenario of political, social and economic crisis that complicates the outlook and seems to be suffocating vaccination even before it begins.

The prolonged friction between Chavismo and the opposition led by Juan Guaidó reached a truce last June, when a joint agreement, sponsored by PAHO, was signed for the management of the pandemic.

With several setbacks, the agreement allowed State resources in foreign accounts - controlled by Juan Guaidó after the sanctions imposed by the United States - to buy protective equipment for medical personnel - more than 400 have died in a year. and the country's diagnostic capacity will be expanded.

A total of 137 tons of medical supplies have arrived this way, paid with 10 million dollars "thawed" through Guaidó.

This year, the same actors returned to sit at a table with a single objective: to develop a single plan for mass vaccination and to gain access to PAHO's Covax mechanism, despite the debts that the country has accumulated since 2017 with some of its money.

The multilateral agency reserved between 1.4 to 2.4 million doses of the AstraZeneca vaccine for Venezuela.

The parliamentary commission led by Guaidó began the administrative procedures for the payment of 30 million dollars for the first endowment and to make the necessary investments to guarantee the cold chain in the dismantled Venezuelan health system.

Everything seemed to be going well.

But hours after the announcement, Nicolás Maduro rejected the offer of AstraZeneca doses, relying on the alarms that were activated in other countries after the appearance of blood clots among some of those vaccinated.

"No vaccine is going to enter the country, nor should it be sent, that has not been authorized by our national scientific institutes," said the president a few days ago, after which he affirmed that Venezuela did not need to "beg" for vaccines.

Most of the countries in the region have started their vaccination plans, some with delays, others more quickly.

Only health personnel require a million.

Little is known about the administration.

Part of the health sector workers, some teachers, deputies, governors, Nicolás Maduro and his wife, Cilia Flores, were vaccinated.

“I already got vaccinated.

I have immunology [sic], ”Maduro boasted this Sunday.

To apply a dose to 70% of Venezuelans, 20 million vaccines are needed.

The country is very far away.

Chavismo has not wanted to appear portrayed in the political negotiation efforts to obtain vaccines through Covax.

He also seems to have refused to honor the agreements.

"There is a war in the world for vaccines and vaccination has not had the desired impact," said Maduro, while ordering a third consecutive week of strict confinement throughout the country.

“Until now, the first generation of vaccines that exists are vaccines that protect the body so that the disease does not hit you so hard, but they do not prevent you from being infected.

You vaccinated can get infected and transmit, "he added.

Among the conditions of the agreement with the opposition is that the plan responds to technical and epidemiological criteria and that the distribution be neutral.

Maduro has rejected the management of AstraZeneca doses, but has opted for Cuba's experimental vaccines: Soberana 02 and Abdala.

The president assured that 30,000 doses of each prototype will arrive this month to be applied as part of phase 3 of the clinical trials.

In June, he said, its application will be massive.

Venezuela's good relations with China and Russia have so far not translated into greater access to vaccines produced by those two countries.

Maduro promised last October that 10 million doses of Sputnik V would arrive by this April, an announcement that has faded in the face of global pressure for vaccines.

The Venezuelan business association, Fedecámaras, also presented a plan a few days ago to join the vaccination and provide funds to buy five million doses that would be used to immunize private sector workers.

The uncertainty over vaccination has fueled the concern of several sectors at a time when immunization must be accelerated to avoid disaster.

In social networks, in recent days the hashtag #VacunasParaLosVenezolanos and #DejenEntrarLasVacunas have been promoted to make the obstacles visible.

"If we vaccinate and avoid the wide spread of the virus we will avoid the appearance and impact of new variants, paving the way to exit the pandemic," the academies of Medicine and Physical, Mathematical and Natural Sciences said this week in a statement in which they do a call to urgently start a robust vaccination plan against covid-19 in Venezuela.

While vaccination is stuck, the covid advances like a tsunami, after it was contained for the whole of last year.

Without gasoline and without air connections, Venezuelans have had little contact between regions and with the world.

At the end of March, Arianallys Pea had to get an oxygen concentrator for her father with a covid picture, complicated by diabetes and obesity.

Her parents were infected at home, and so was she.

With mild discomfort, the 23-year-old managed to care for everyone to avoid going through the collapsed hospitals in Caracas, because they also do not have insurance to attend the private system.

Over several days, Arianallys called over a hundred providers and individuals for oxygen.

“Not available,” he heard dozens of times, until one day he was able to set aside a piece of equipment to use for 15 days.

In the investigation they offered him equipment for sale or the payment of guarantees for the rent, from 1,500 to 5,000 dollars, in a country where the minimum wage is just 1 dollar.

Between several members of the family they paid for the money for the equipment and for the care of a home doctor.

"It's distressing, because this gets complicated from one moment to the next," he says over the phone.

The oxygen crisis is a clear indicator of the increase in cases, but little can be done when this point is reached, acknowledges Betulio Chacín, president of the Venezuelan Society of Pneumonology.

“A patient with pulmonary emphysema, asthma or pulmonary fibrosis may require two to three liters of oxygen per minute.

What we are seeing is that in patients with covid we need 15 liters of oxygen per minute, so it is necessary to connect two cylinders at the same time and a single person can exhaust up to six a day ”, explains the specialist from Maracaibo, in the western Venezuela, where the overflow was experienced last year.

"There is no way to meet that oxygen demand at the same time, because it is beyond calculation," he says.

For this reason, the doctor joins the call of the other sectors.

"Getting vaccinations is the most important thing, and start vaccinating those who are in the day-to-day battle, because we are going to run out of personnel," he warns. 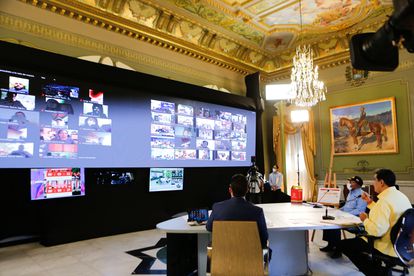 PAHO: Maduro and Guaidó teams will meet for vaccines 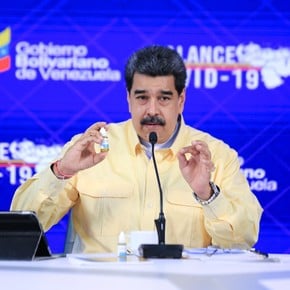 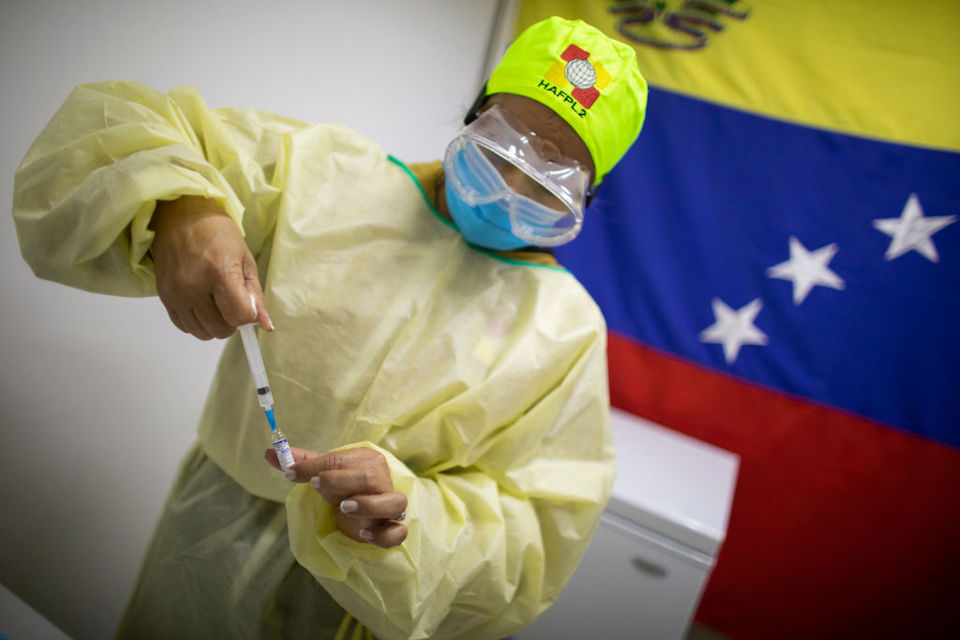 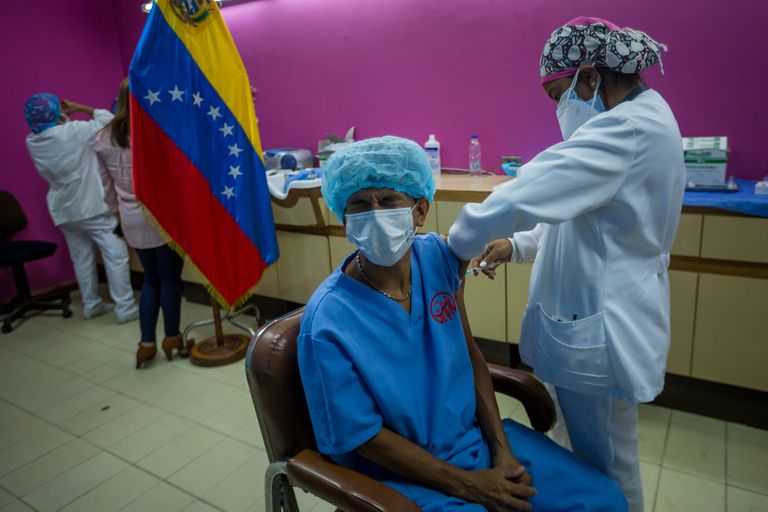 The rise in covid-19 cases collapses the Venezuelan health system 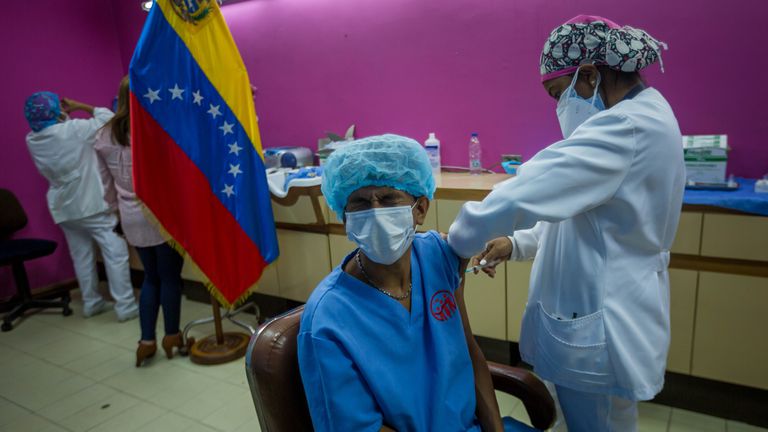 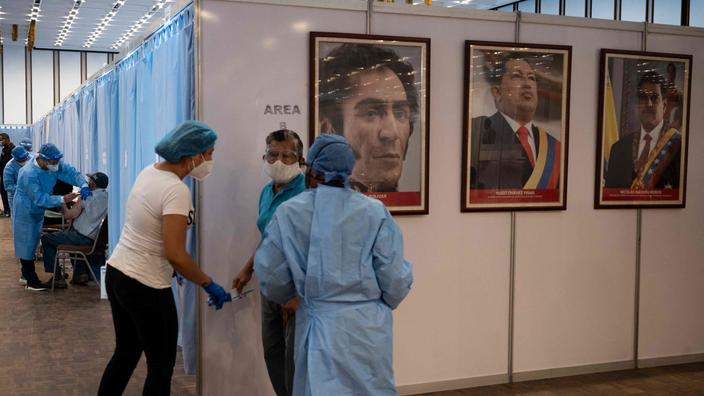