Hof remains Germany-wide Corona hotspot. The situation in the intensive care units is worsening across Bavaria. All news in the ticker. 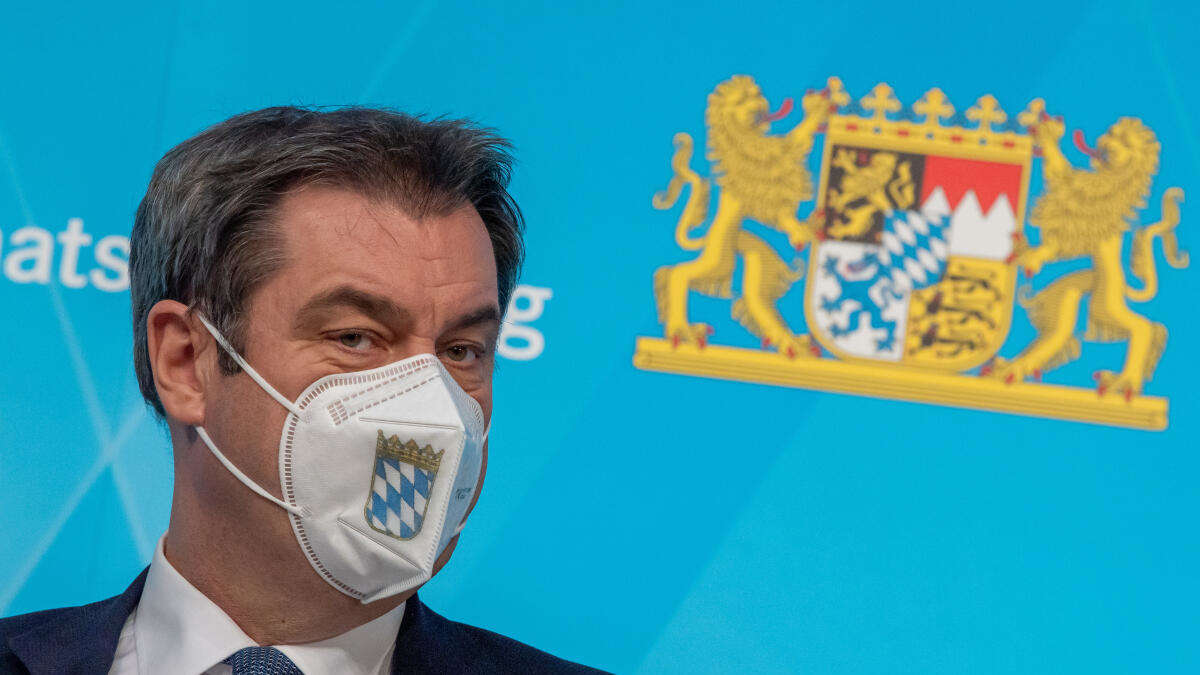 The situation in the intensive care units is worsening across Bavaria.

In the Swabian town of Kempten and in Memmingen, all beds are already occupied and patients are being brought to Augsburg.

Even there, however, there are only 14 beds available.

"The capacities for treating other emergencies are becoming increasingly tight," writes the Nuremberg Clinic.

In Upper Bavaria the intensive care units of the clinics in Erding, Fürstenfeldbruck and Dachau are fully occupied, in Lower Bavaria those of the Landshut district, as the Divi central register shows.

Currently, 761 corona patients are being treated in hospitals across Bavaria - and thus more than at the apex of the first wave, where 716 patients were treated on April 20, 2020.

The Hof region continues to have the highest number of corona infections in all of Germany.

The Robert Koch Institute reported a seven-day incidence of 571.7 for the city of Hof on Friday.

The district of Hof follows with a value of 451.5.

The city and district of Hof are now receiving an additional 4,000 doses of the Astrazeneca vaccine.

All those who want to be vaccinated over the age of 18 can register for this from Friday, regardless of previous illnesses or occupation.

The demand is so great that the district's server is overloaded, said a spokeswoman for the district on Friday morning.

Almost 20 percent of the people in the city and district of Hof have already been vaccinated against Corona at least once, District Administrator Oliver Bär and Mayor Eva Döhla announced on Thursday.

The border towns of Ulm and Neu-Ulm have issued a reminder for uniform corona rules.

The implementation of the regulations from two different state ordinances regularly presents both cities with immense challenges.

The two of them wrote letters to the health ministers of their countries.

They call on Manne Lucha and Klaus Holetschek to standardize the rules on both sides of the Danube.

For the measures to be accepted, they would have to be more uniform and comprehensible.

For example, the city leaders are in favor of compulsory masks in the pedestrian zones and a general curfew in the next few weeks "in order to effectively counter the nocturnal hustle and bustle".

The states of Bavaria and Baden-Württemberg should therefore coordinate in order to be able to create common rules in the two cities, demand the two politicians.

In Bavaria, 4553 new infections with the corona virus have been reported within the past 24 hours.

That means a huge jump compared to the previous day (119).

However, it is possible that late registrations from the Easter days are also included in the figures.

The district of Kronach is in fourth place.

In between, the Thuringian hotspot Greiz (346).

From Monday, a strict corona test will apply in Bavaria's schools.

Now business and cultural associations are also calling for a municipal test strategy for the Bavarian capital.

This should allow shops, restaurants and theaters to reopen in the pandemic.

"As soon as it becomes permanently warmer, many thousands of citizens will use the public space again, with or without a test strategy," the associations argue on Thursday.

Corona in Munich: Associations call for a test strategy for openings

Due to its size, Munich is out of the question as one of the model cities planned by the state government for cautious openings.

Associations such as the Munich Tourism Initiative, city officials or the trade association are now demanding: The city should develop a concept for uniform and comprehensive corona rapid tests regardless of this.

For this, Munich must, among other things, set up test stations, enable free corona tests and set up a coordination office.

For a few days, family doctors in the Free State have also been allowed to vaccinate against the corona virus.

If the doctors have their way, all corona vaccines should be available in Bavarian practices in the future.

"Depending on the indication, we can provide our patients with the right vaccine for them," said Gerald Quitterer, President of the Bavarian State Medical Association, on Thursday.

For this reason, all approved vaccines should be available in general practitioners' practices.

Because the decision as to which vaccine is given is a medical one.

According to the Bavarian Association of General Practitioners, the Astrazeneca vaccine was available for vaccination start before Easter.

In the future, the practices are more likely to be supplied with Biontech.

But Quitterer emphasizes: The willingness of the resident doctors to cooperate should not be jeopardized by back and forth with the vaccines that are made available to the practices.

The Deputy Prime Minister of Bavaria Hubert Aiwanger (Free Voters) wants to allow school children to take lessons without a mask after a negative Corona test.

In a few weeks, in his opinion, it should be: "Tested negative means down with the mask", he said on Thursday at a discussion event with the "Let's open" initiative, which advocates easing the corona measures.

Corona in Bavaria: masks off for schools?

Aiwanger is stepping up significantly

Aiwanger defended the plan to take tests directly in schools.

If you let parents and children do it at home, you have to consider that there are also 20 percent children who are sent to school without breakfast.

Therefore, one must then expect that a double-digit percentage "will serve without a test in school".

A test at school carries the risk that a child who has tested positive will “sit in class with a bright red head” because he is embarrassed about the result, but he still believes that this is the right way to go.

Originally, the free voters were for parenting tests, but could not have prevailed in the coalition.

This should apply from next Monday and was not well received by everyone. * In the

talk "Jetzt red i", Piazolo defended the new measure in the evening.

Under the supervision of the teachers, all students then have to: Test themselves independently.

In response to the question of whether the wearing of masks in the classroom would be eliminated by testing, he made it clear: “At the moment we haven't touched it.” However, the minister did not rule out the possibility that the mask requirement will fall over time if the test strategy works.

Munich - The seven-day incidence in Bavaria has fallen again and is 119.0 on Thursday.

That comes from the figures of the Robert Koch Institute (as of 3:08 a.m.).

On Wednesday it was still 121. The RKI * continues to point out that the current Corona * numbers could be skewed because of the Easter holidays, as people did not go to the doctor or results are reported later.

Corona: Germany's three largest hotspots are in Bavaria - Hof continues to be the front runner

With the city of Aschaffenburg there is now a circle under the 50s incidence again in the Free State.

32 more are between 50 and 100, 63 districts and urban districts over 100. The RKI figures also show that the three districts or cities with the highest incidence in Germany are in Bavaria.

With the district of Cham (278.9) in sixth place, another Bavarian region is in the top 10. Meanwhile, the seven-day incidence in Munich is 87.4.

On Wednesday, Markus Söder announced at the press conference after the cabinet meeting: "The danger of the third wave remains." and experiments. ”With that, the CSU * boss rejected planned easing.

Söder also announced changes to the schools - an overview of the future rules in the Free State can be found in our overview. *

The reactions to the announced compulsory testing * in schools followed promptly.

Not only is the obligation to test * criticized, some also consider returning to school after Easter to be completely wrong.

A Bavarian teacher also took stock after a year of Corona - she found clear words on Twitter that she addressed directly to Söder. *

Corona: Germany's top 3 hotspots are in Bavaria - Söder-Minister comments on a possible mask-off

Söder warns of the third wave - Germany's super corona hotspots: the top 3 are in Bavaria

Corona in Germany: the beginning has been made! Woman receives first vaccination - RKI does not trust current figures