After the Easter holidays, the corona test is mandatory in schools. Before school starts on Monday, Minister of Culture PIazolo speaks at a press conference.

After the Easter holidays, the corona test is mandatory in schools.

Before school starts on Monday, Minister of Culture PIazolo speaks at a press conference.

On Monday, lessons start again in Bavaria, and a test is then mandatory for students, teachers and the rest of the school staff.

"Testing is a huge opportunity," said Minister of Education Michael Piazolo on Friday morning at a press conference.

He wants testing to be seen as an opportunity, after all, it increases safety for everyone involved.

In some cases he would like to see more confidence.

Sometimes there are "a lot of concerns," said Piazolo.

“We should see testing as an opportunity and not always only see the risks.” A self-test - carried out by the students themselves - is “not a reason for fear, but for hope.” Bavaria's minister of education also tried to take away worries: “ The tests are easy to carry out and without risk or pain. "

There are two options for pupils: You can take a self-test at school at the start of the lesson.

The alternative is an up-to-date PCR test or rapid antigen test that you can do at your doctor's, test center or pharmacy.

This should not be older than 24 or 48 hours - depending on the incidence.

Corona rules at Bavaria's schools: "What happens to those who refuse to test?"

"What happens to test refusals?" Asks a journalist.

“Only those who have been tested can take part in the lessons,” explains Piazolo.

The Minister of Education also expects that not all of them have noticed the mandatory test and will be surprised on Monday.

“You have to be a bit flexible then,” you have to explain - and also make it clear how such a test works and what opportunities it offers to take away uncertainties.

In the first approach, the plan with mask compulsory remains in place - despite tests.

“We may have several steps.

If everything works well, the elimination of the mask requirement cannot be ruled out in the future.

Corona rules at Bayer's schools: Piazolo warns - "it can only work if everyone participates"

A teachers' association has spoken out against compulsory testing.

Piazolo understands that if a new task is always added, that some would see it critically.

Teachers and parents are of course particularly stressed in the pandemic.

"I understand that you have the feeling that there is still another challenge to come," said the Minister of Education.

There was a similar discussion about the mask requirement in schools.

Teaching with a mask is a challenge.

But he is firmly convinced that it can be done.

Actually, it would have to be approached in a completely different way, he demands: "If the Austrians have been able to do this for six weeks, we can do it three times."

You may have to readjust again, but Piazolo is convinced that it will work.

"It can only work if everyone participates."

, Piazolo explains about testing: Most schools will probably test in the classroom.

It is thought that you do this at the beginning of school.

The teachers have the supervision.

If you then have a positive result in a self-test, this does not necessarily mean that it is really positive.

You then have to do a PCR test to check it.

No child is stigmatized with a positive test, Piazolo tries to take away the fear of some parents.

“That sometimes a child in the class is sick or does not get a good grade” is also known in one class.

They don't talk about stigmatization there either.

will be no planning

as usual in the school year in the next few weeks, you have to readjust again and again.

However, Piazolo is optimistic that the safety net can offer a lot of face-to-face lessons.

Corona in Bavaria: Minister of Education explains offers for schoolchildren

We know that the “scissors have opened” between students who find it easier to learn independently and those who find it more difficult.

There are therefore support offers such as tutoring and bridging offers, said Piazolo.

In the summer holidays, they also want to offer a support program in the core subjects.

In addition, individualized offers are to be added, for example for students who advance on probation.

Piazolo: "See testing as an opportunity" - Corona self-test is "no reason for fear"

"Of course there are many questions," said Piazolo.

“But we should see testing as an opportunity and not always just see the risks.” He sometimes wished for more confidence and “positive power” to face Corona.

Sometimes there are “a lot of concerns.” These should not be transferred to the children and scared them.

“A self-test is not a reason for fear, but rather for hope.” Nevertheless, parents would be worried.

You have an explanatory video, “that takes away worries and fears.” You could also buy a self-test and “practice” it at home with the children, that would also take away fears.

Corona rules at Bavaria's schools: "Testing is a huge opportunity"

You want to offer planning security.

For the following week, the incidence value from Friday applies.

With an incidence of up to 100, the following applies: In all classes, alternating or face-to-face lessons apply with a minimum interval.

Over 100 applies: There are only individual classes in face-to-face lessons, for example the final classes, eleventh grades and the fourth grade of primary school.

The remaining classes have distance lessons, as Piazolo explains.

The self-tests would now increase security.

"Testing is a huge opportunity," says Bavaria's minister of education.

You get more security for teachers and students.

These tests should be carried out yourself, this is also permitted by the companies.

“Every child should test themselves.” The teachers supervise this.

"The tests are easy to carry out and without risk and pain," says Piazolo.

These cannot be compared with a rapid test that is carried out deeper in the nose.

"Regular testing (...) is the chance for us to be able to maintain alternating and face-to-face lessons," said Piazolo.

These are an “entry ticket.” From Monday onwards, only those pupils who take a test can take part in face-to-face classes.

You can take the test in two ways: On the one hand, as a self-test in schools.

The alternative is an up-to-date PCR test or rapid antigen test that you can do at your doctor's, test center or pharmacy.

He hoped that parents, teachers and students could find some rest over the Easter holidays.

It was a "stressful time".

“The pandemic is not giving us any rest,” he sums up.

You need a high degree of flexibility and a high speed of readjusting decisions - also in the school landscape.

"Our maxim: As much present-day lessons as possible", that will remain.

There is no substitute for face-to-face teaching.

Knowledge is imparted there, but school is also a “social place” that the students miss a lot, said Piazolo.

Therefore, you set up a "safety net".

The minister of education speaks of a “magical square of safety.” Number 1: Hygiene concept with a mask requirement, Number 2: The incidence brake: If the incidence is below 100, you behave differently than above 100. Number 3: Testing.

On Monday, lessons will start again in Bavaria, the Easter holidays will be over.

In 20 minutes there will be a press conference with Minister of Education Michael Piazolo.

You can follow them here in the live stream and ticker.

Munich - The Easter holidays in Bavaria are coming to an end, school will start again on Monday - but with one important change: A Corona * test is mandatory after the holidays for participation in face-to-face classes - regardless of the respective seven-day incidence. *

In future, students, teachers and other school staff will have to be tested for the virus at school at least twice a week.

So far, a test was only compulsory in regions with an incidence of over 100. Those who refuse the test * or have to be quarantined receive distance training.

You can find an overview of all rules here. *

Bavaria's Prime Minister Markus Söder announced the new measures for the Free State at a press conference on Wednesday.

The reactions to the compulsory test for pupils and teachers were different.

In an open letter signed by the Bavarian Parents' Association, among others, the “Education in the Pandemic” working group demanded that the tests should remain voluntary.

The Bavarian Teachers' Association repeated its demand, "If it is not possible to test absolutely safely and the vaccination offers are not available, then the schools have to stay".

However, Minister of Culture Michael Piazolo ruled that out at the press conference.

By the way: The most important stories from Bavaria are now also available in our brand new, regular Bayern newsletter.

Corona in Bavaria: Compulsory tests for students and teachers - a challenge for pharmacies

Henrike Paede (66), Vice-Chairwoman of the Bavarian Parents' Association (BEV), knows the concerns and concerns of parents about the obligation to test, because they receive a lot of e-mails on the subject every day.

In the Merkur interview, she explained the concerns and explained why she still considers the decision to compulsory tests in schools to be acceptable and also feasible.

The compulsory test not only poses great challenges for schools, pharmacies are also likely to face a lot - at least for those who offer Corona * rapid tests.

It is generally intended that the self-tests should take place in schools, but there are parents who oppose this.

They fear their child could be bullied if the test is positive.

As an alternative to the test in the classroom, Minister of Culture Piazolo pointed out the possibility of taking rapid tests in test centers or pharmacies and sending children to school with a negative result.

Self-tests at home are not allowed.

On Friday (April 9th) there will be a press conference on the start of school after the Easter holidays.

You can read all the news about the corona virus in Bavaria in our news ticker. 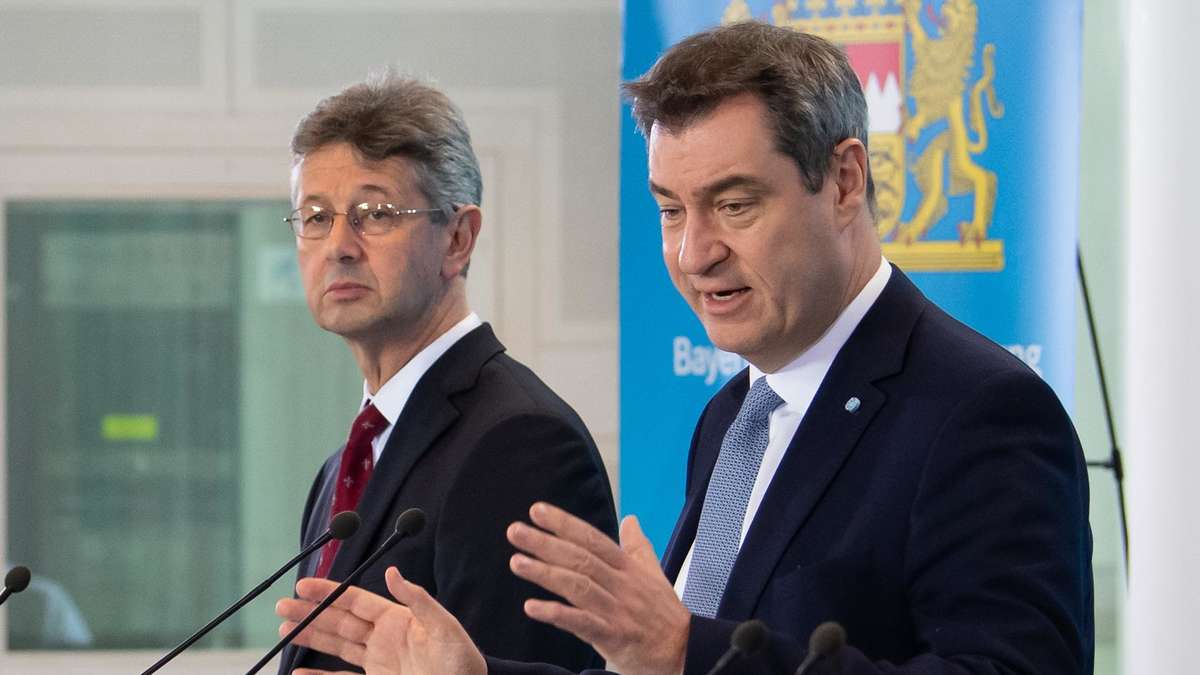 "How should that work": Corona testing is mandatory in Bavaria's schools - clear reactions follow promptly