Did Germany get through the Easter holidays well on Corona issues? Health Minister Jens Spahn and RKI boss Lothar Wieler respond in a joint press conference. Did Germany get through the Easter holidays well on Corona issues?

.: Health Minister Jens Spahn (CDU) and RKI President Lothar Wieler informed about the Corona situation in Germany in a joint PK this Friday.

The most important points:

.: What does Spahn mean by nationwide measures?

What exactly is wanted?

His answer to the Corona-PK is a swipe at some country bosses: "It would be a value in itself if the agreed emergency brake were implemented consistently." The "instrument box" of the past MPK would "only have to be used".

"Shut everything down once for two or three weeks - like Easter 2020, that would have been perfect," replies Spahn.

And then loosen up in retail and outdoor catering.

Spahn comes to speak of critics who would complain that the Corona situation "is like 12 months ago".

"This time we can give a test-based opening perspective, and with the vaccinations we can give it a completely different one."

a journalist not only to look at the number of intensive care beds occupied.

Many Covid 19 patients are not only lying there, but also on the other wards.

“They have to be isolated because they are infectious”.

An additional burden for the clinic employees.

Germany has as many of them as few other countries - but not “infinitely”.

These people shouldn't be worn out.

There should be no mood that Germany "has even more personnel problems after the pandemic".

.: The topic of changing the Infection Protection Act comes up.

“I think we've been discussing how for days now.

But when is more important! ”A federal regulation cannot be passed in 24 hours.

He himself would be for the fastest option because the current Corona situation reminds him of last October.

A change to the Infection Protection Act would be "fundamental", says Spahn.

"But currently an option that needs to be discussed."

.: Which measures are part of a successful lockdown - and how long would it have to take?

He finds a “massive” restriction in mobility crucial.

"Most modelers speak of a period of two to five weeks."

.: How important are corona tests in companies?

“This has a value in terms of the number of unreported cases,” replies Wieler.

However, if the incidence increases, companies will have to close again.

"We cannot test the virus away".

The protective and preventive measures are decisive.

The number of unreported cases is not influenced by rapid tests or self-tests, which are not as reliable as PCR tests.

"They are just one more tool."

It's about whether the doctor's practices should receive less vaccine from Biontech and more from Astrazeneca - possibly in favor of the vaccination centers.

Spahn verbally hits the table *: "I said here a week ago that Astrazeneca will go to the doctor's office from mid-April".

Currently it is only the Biontech vaccine.

"I don't get all the fuss," he continued.

There is no “less delivery from mid-April”, but just a different vaccine.

“I would like to point out that there may be changes in terms of deliveries in the coming weeks.

We don't need a ticker entry every time 5000 cans are delivered at the end of the week instead of the beginning of the week.

The specified delivery quantities are only forecasts and not fixed dates, which of course could differ.

Spahn: "Order only from the manufacturers themselves"

.: A ZDF journalist speaks about evidence that

Was that known to Spahn?

The Minister of Health approves such offers.

"This creates a gold rush atmosphere," he says - but emphasizes: "We as a federal government procure exclusively from the manufacturers themselves."

Are you planning to financially support self-tests for private individuals?

“Not at the moment,” replies Spahn, referring to the market situation with the providers.

That can be different in two or four weeks. "

.: Under these conditions, relaxations did not mean that people would be exposed to a lower risk of infection, continues Wieler.

Rather, the responsibility is placed on those working in the health care system.

"If you get a vaccination offer, please accept it too!" Wieler insists.

a.m .: "The third wave triggered B.1.1.7 - nothing has changed in that regard in the past few weeks", Wieler begins his Corona update.

It will take time before the vaccinations show an effect on the population.

"Every infection that we prevent together is a success," he continues to urge people to be disciplined.

"The incidence is not as reliable as we would like it to be".

There were fewer doctor visits and tests over the holidays.

Corona-PK with Spahn and Wieler: Age of intensive care patients is falling

There the development is "unfortunately very, very serious," said Wieler.

More and more people would be admitted with Covid-19 - and they would get younger.

Among the 35 to 49 year olds, the numbers have risen sharply.

The age of intensive care patients is also falling.

This was shown by a data analysis at 70 German hospitals.

: They now want to distribute a million doses of Covid-19 vaccine per week to the doctor's offices, explains Spahn, after he has announced a current vaccination record - but restricts: "It is not every day now set a new record. "

He would actually find an MPK the “right format” for this.

However, referring to recent statements by Berlin Mayor Michael Müller, he criticizes that a “brief consultation” is not enough: “I can only wonder about some of the statements made these days.” The parties should “shut down” their dispute.

Consistent and, if possible, nationwide measures are needed.

: The Corona PK with Spahn and Wieler has started, the journalists present must wear mouth and nose protection.

Spahn begins with the new infections - "there are, to put it very clearly, too many".

In addition, they “most likely” do not reflect the true infection process

He currently refers to almost 4,000 intensive care patients in Germany.

"We mustn't wait until the clinics are overloaded".

This is all the more true because of the more contagious mutation B.1.1.7.

Berlin - The MPK with Merkel should probably be postponed - but not the regular Corona briefing with Lothar Wieler and Jens Spahn.

Also on this Friday, the RKI boss and the CDU health minister will appear in front of the capital's press.

The appointment is set for 10 a.m.

The debate about the Corona course continues hours beforehand - in which appointment finding now plays a bigger role.

In the Prime Minister's Conference (MPK), whose chairman Müller is currently.

But the SPD politician said on Friday morning in the ZDF “Morgenmagazin” about the reasons for a MPK postponement, among other things: “It is also not yet sufficiently clear what considerations from the Chancellery should really mean, a short, hard lockdown.”

Exactly a week ago, the authority had recorded 21,888 new infections and 232 more deaths within one day.

The 7-day incidence is an essential measure for tightening and loosening restrictions.

In February it had meanwhile fallen below 60, and before Easter it was higher than 130 again. In the past few days, the value had declined - but the RKI pointed out to its interpretation that fewer tests were carried out around the Easter days.

"The values ​​can only be evaluated in a few days," writes the RKI. Palmer shoots at the hairdresser's opening and asks himself: Why are they of all things vital?

Palmer shoots at the opening of the hairdresser and asks himself: Why are they of all things vital?

Palmer shoots at the hairdresser's opening and asks himself: Why are they of all things vital? Spahn and Wieler talk about the corona situation today: press conference on the current situation 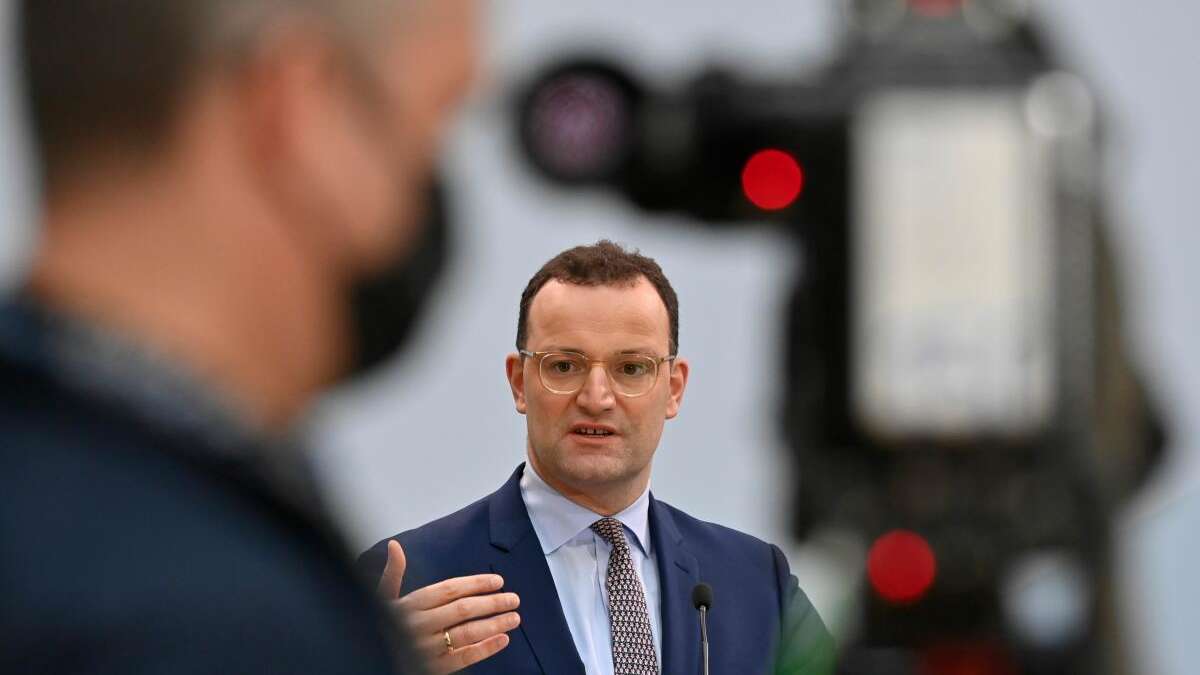 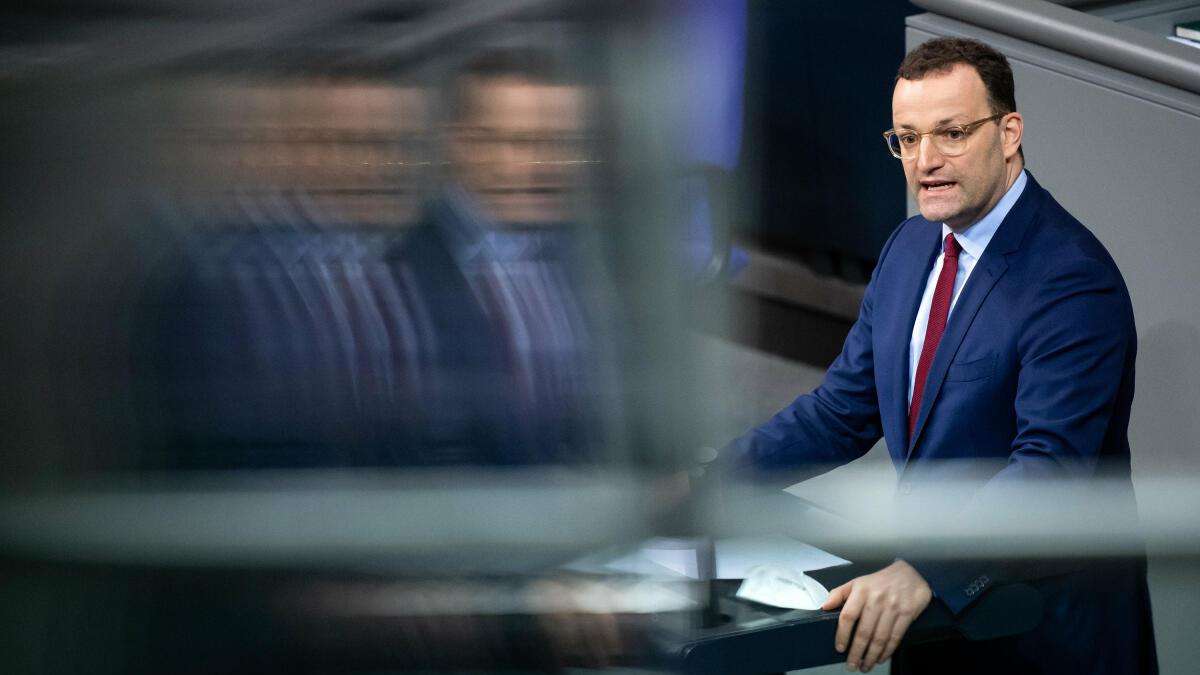 Spahn presents vaccination ordinance: sequence determined - "The way out of this pandemic"