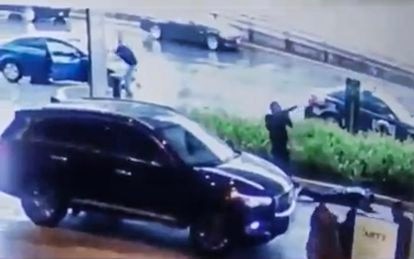 The security cameras of Plaza Artz recorded the shots that occurred on July 24, 2019 in the commercial center of Mexico City.

It was July 2019. In a restaurant in a luxurious area in the south of the capital, a woman in a wig and a man rose from a table with the mettle of trained hitmen and riddled two Israelis with 16 shots to the horror of dozens of diners.

At that moment the war that the capital has lived through for months began.

Until that date, the Jalisco Cartel's bullets still sounded far away and the capital was waging battles between local cartels, some financed by the majors, but none with the capacity for force and lack of sufficient fear to threaten the State.

On July 24 of that year everything changed.

And the macabre cold-blooded double murder orchestrated by Mexico's most powerful drug lord, the Jalisco Nueva Generación Cartel, ripped open the fragile seams of the criminal map that had kept the war capital at bay.

Los del Mencho had broken into a sacred plaza, in the heart of the country.

This week, information from the

revealed the way in which that group of hitmen sent by the men of Nemesio Oseguera Cervantes, alias

, leader of the Jalisco Cartel, were organized by a WhatsApp group called

to assassinate Benjamin Sutchi, 44, and Alon Azoulay, 41. The attack on the Israelis was the cartel's first major coup in the capital and sparked the fight that months later faced the capital's police chief, Omar García Harfuch, with the El Mencho hitmen inside and outside the capital.

The second major blow and the most forceful of the narco was the assassination attempt of the police in June 2020. High-caliber rifles and dozens of bullet holes in Harfuch's truck, on the emblematic avenue of the capital, Paseo de la Reform.

A direct threat not only to the person responsible for the security of the capital, but to the Mexican State.

, acted as a hook for the two Israelis, who sat with her at the same table to discuss a money laundering issue at a Chinese food restaurant in the luxurious neighborhood. from El Pedregal, south of the city.

Authorities released the identity of Sutchi, one of the two killed.

He had been arrested in the capital in 2005 for an Interpol file and extradited to his country, where he served a 14-year sentence for murder.

It had only been a few weeks since he had returned to Mexico and had resumed his relationships with local crime.

Azoulay was, according to official information, his assistant.

A woman was detained by authorities from the Secretariat of Citizen Security (SSC), after registering firearms shots in a shopping center located south of the capital.

The police investigations concluded that it was an alleged betrayal of those from Jalisco to the Israelis, with whom he collaborated.

La Güera, arrested last March by the capital's police for the double homicide and linked to the Jalisco cell in the capital, fled that day to the restaurant's kitchen a few seconds before her companions were riddled with bullets.

La Güera has been the last capture on the trail that Harfuch's men have followed to dismantle the Mencho criminal network in the capital.

WhatsApp messages read how a group of about seven hitmen and collaborators, some sent from Jalisco, organized to collect weapons at a taqueria.

Two of them, Esperanza N. and Mauricio Hiram Pérez, alias

sat with their backs to the victims at a restaurant table.

"Right there, apa", says a certain El Barbas to Mauricio by messages.

Outside, other hit men were waiting, who had to clear the way for their escape.

Within seconds, the two criminals got up from their table and went directly at the Israelis and fired 16 shots at them.

The only detainee that day was Esperanza, who forgot a wig on the way out of the restaurant while on the run.

At that moment the bizarre story of the crime of Artz began, where the alleged criminal indicated at first that it had been a matter of jealousy;

later, that he had received 5,000 pesos for pulling the trigger, plus another 25,000 that had been promised to him at the end of the job.

A few months later, the Jalisco Cartel appeared in the sights of the authorities.

Harfuch landed as chief of the Mexico City police in October 2019. His team of investigative police officers - who were trained in the Criminal Investigation Agency of the Government of Enrique Peña Nieto (from 2012 to 2018) - arrived in the capital with the promise to suppress the terror of organized crime whose wake of homicides had shaken the first months of the government of Claudia Sheinbaum, from Morena (the same party as the federal government).

The heavy hand that characterized those of Harfuch, with police strategies more typical of the war against narco at the national level, broke out with force in a city where the fight against organized crime was observed only in the news, in the bloody battles in the north or in the besieged towns of Michoacán.

A few months before his inauguration, some operations led by Harfuch surprised in the capital, while he was still in the Criminal Investigation Agency, in which the leaders of the local drug traffickers unknown until now began to fall: El Tortas and El Jamón, alleged leaders of the Antiunión cartel (contrary to the powerful Unión de Tepito that controlled the capital);

All of them, alleged collaborators of those from Jalisco in the city.

A month before taking office, Harfuch organized an unprecedented operation hundreds of kilometers away in Zapopan (Jalisco), in the metropolitan area of ​​Guadalajara.

Accompanied by the Army, they detained one of the two gunmen from Plaza Artz, El Mawicho, in one of the bastions par excellence of Mexico's most powerful drug lord

The alleged criminal declared that he had been sent by the narco to kill the Israelis in exchange for 100,000 pesos.

From then on, the war against the Jalisco Cartel by the city's police chief became evident.

Artz's crime gave them a thread to pull to dismantle the Jalisco criminal network in the city.

One of the presumed heads of hitmen and most important recruiters of the Jalisco Cartel in the capital, Carlos Fernando Huerta Núñez,

, was arrested in February 2020. The authorities presented him as the organizer of the attack in the commercial plaza.

At the same time, the federal government dealt another blow to the Jalisco Cartel's liver: the extradition of Rubén Oseguera, alias

And at the beginning of June, the blocking of accounts in a joint operation with the DEA, which frozen 1,939 bank accounts where they had detected movements of more than 900 million dollars.

From that moment on, threats from those in Jalisco began to arrive at high government officials.

A few months later, the attack against Harfuch in June revealed the fragility of the State before the power of the drug traffickers, which had dared to carry out an attack of these dimensions in the capital of the country, until now a sacred place for internal struggles. of the narco.

A few days after the attack on the capital's police chief, José Armando Briseño, alias

Another suspect head of the Jalisco Cartel in the capital and mastermind of the attack against Harfuch.

According to intelligence reports, Briseño had enlisted gunmen in the criminal organization and trained them for executions.

The police also discovered that La Vaca had also been involved in the Plaza Artz bombing, as he had recruited the hitmen who organized the double crime against Israelis in July 2019.

The latest investigations into the attack in Plaza Artz, the arrest of La Güera and how they organized to carry out an attack against the Israeli mafia reveal the battle of the capital to prevent those from Jalisco from taking control of the city.

A police strategy that confronts Mexico City with one of the worst evils in Mexico, the terror of the narco that does not give truce in any corner of the country and that has shaken it for years with the worst homicide figures in its history. 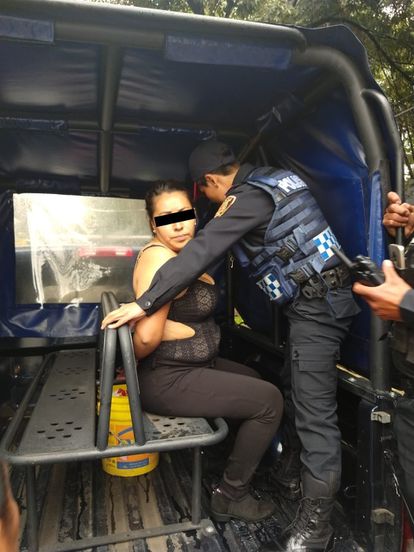 A hitman, the new clue after the murder of former governor Sandoval 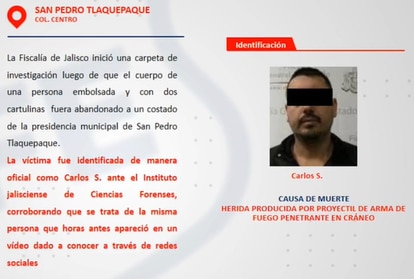 Puerto Vallarta, a tourist treasure in the hands of the narco 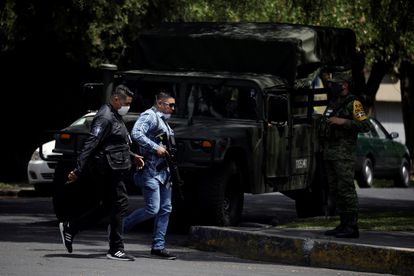 The Long History of High-Profile Drug Attacks in Mexico 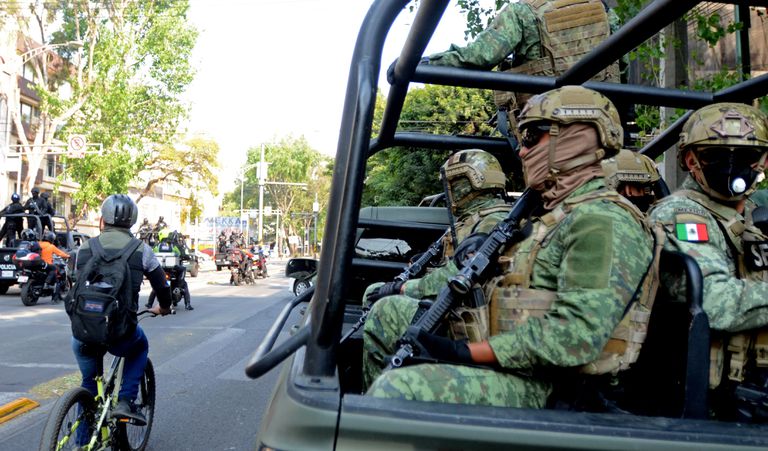 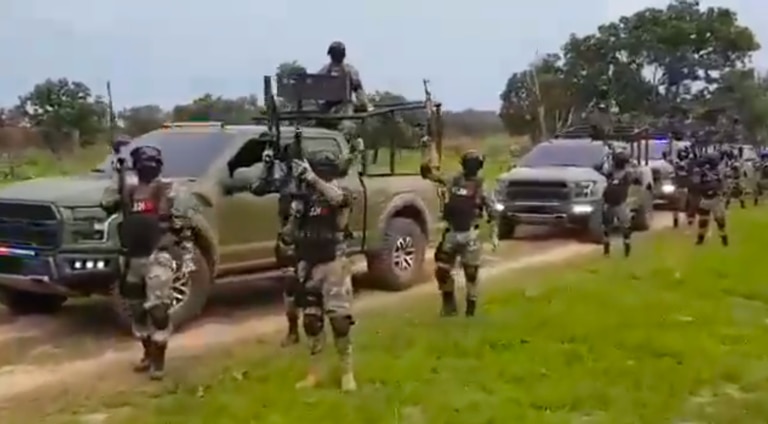 The shadow of the Jalisco Nueva Generación Cartel, an empire of drugs and violence