Armin Laschet and Markus Söder: Forced vote in the CDU board

In the middle of the night, Armin Laschet pressed a vote on the candidacy for chancellor on the CDU board - and won the majority. But the opposing voices weigh heavily. Is Markus Söder now giving in? 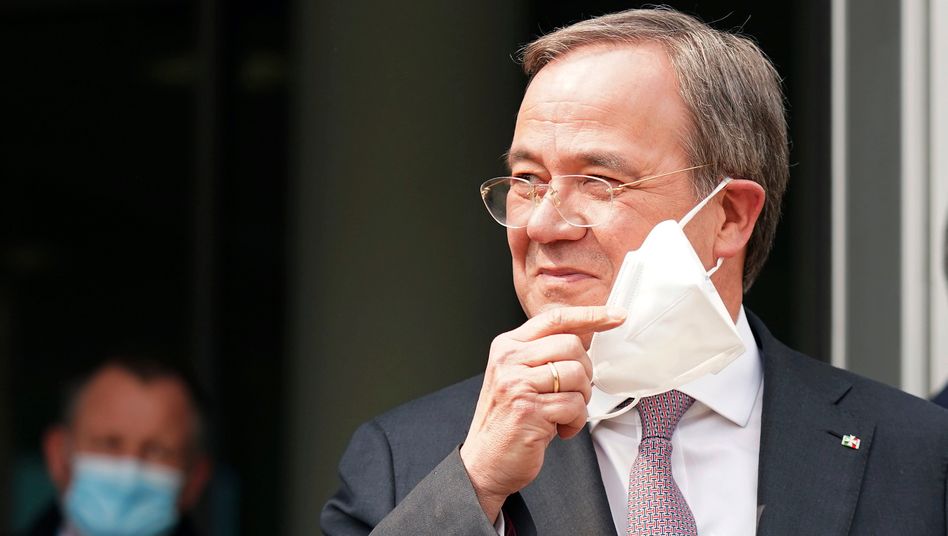 What Armin Laschet expects from this day, this meeting, he makes quite clear at the beginning.

This, says the CDU boss on Monday evening, is the day to decide.

The switch of his federal executive committee only runs about 30 minutes.

Laschet, that much is clear, wants to end this digital session as a candidate for chancellor, at least with a clear vote from his top committee.

It should be a show of force, an act of violence that should finally dissolve the chaos that has ruled the Union for weeks.

But it takes seven and a half hours to get a result.

31 board members vote for Laschet, 9 for his opponent - Markus Söder.

It's a majority, yes.

But the Söder votes weigh heavily on Laschet.

They are only the end of a memorable session.

What begins in the early evening and will drag on into the night is not just the latest chapter in the internal Union struggle for the candidacy for chancellor.

It is a political thriller that has seldom been seen.

The initial situation: Both Laschet and CSU boss Markus Söder stuck to their ambitions before the meeting, both wanted to become a candidate for chancellor, talks at the weekend had no result.

Söder then put the rest of the action in the hands of the CDU on Monday afternoon: The CDU decided "sovereignly," said Söder at a press conference.

"We as the CSU and I also respect every decision."

This could be interpreted as the beginning of the retreat - or it could be seen the other way round: as the last offensive, as an explosive device, which Söder had thus placed in the top of the CDU.

Anyone who wants me, so his appearance could also be understood, should now explain himself for me.

Or be silent forever.

Laschet's situation had become increasingly tricky in the days before.

The part of the CDU that wanted Söder to be a candidate for Chancellor, especially because of his significantly better poll numbers, had spoken out in increasing numbers, and louder and louder.

Laschet's last chance, as his people saw it, would be a vote in the federal executive board, a clear result - unlike a week earlier, when there was a clear opinion in his favor, but without a vote.

So Laschet urged the vote right from the start, he wanted to end the dispute.

Everyone should speak now, including the advisory board members.

Best for him, for Laschet.

When did that happen before?

A chairman, elected just three months ago, is fighting for the support of his board of directors.

For him it is all or nothing, for the party it is about the question of whether it can defend the Chancellery.

And of course not everyone here speaks openly what they think.

But many speak as openly and straightforwardly as is just possible in such a body.

Some tell Laschet that they don't think he's the right person - and the mood is completely different and more mixed than a week earlier.

The CDU will think about this meeting for a long time.

No decision to "screw through"

The first requests to speak are still in Laschet's favor. Ex-Minister Herrmann Gröhe pleads for the chairman, as does Laschet's predecessor Annegret Kramp-Karrenbauer, and clearly. The past week was "ruinous", she criticizes - Söder is to blame. Laschet is the right candidate for chancellor, according to AKK. It's a noble move. Laschet did not always behave correctly towards her in her time as party leader - she does not pay him back in this sensitive situation.

Then it gets more complicated, harder. Norbert Röttgen, who is known to be no friend of Laschet, speaks out in favor of Söder. Reiner Haseloff too, the Prime Minister of Saxony-Anhalt. In the East there is a clear preference for Söder, he emphasizes, that a vote has been taken and that no decision can now be "screwed through" on the board against the entire base of the Union.

It is becoming increasingly clear that there is really open discussion here.

Some want to involve the grassroots somehow, others urge an immediate vote in favor of Laschet.

Peter Altmaier, the Minister of Economic Affairs, moves away from the party leader.

He says you have to keep an eye on the mood outside of this body.

He knows practically no regional association other than North Rhine-Westphalia that wants Laschet as a candidate for chancellor.

He is a confidante of the Chancellor.

That is also switched on.

Laschet mostly listens, now and then he cuts in.

He is for Söder, says Berlin's state chief Kai Wegner, his regional association wants to postpone a vote and first convene a conference of district chairmen.

He wanted a decision today.

It goes back and forth now.

There could be no question of a coordinated stance in the East, complains the CDU parliamentary group leader Jan Redmann in the direction of Haseloff.

He can still well remember how Söder raged against billions in aid for Lusatia.

Other Christian Democrats from the East also speak out and stand by Laschet's side - Thuringian Mike Mohring, for example.

"The mood in Saxony is clear for Söder," says Marco Wanderwitz, the member of the Bundestag from Saxony.

It's an honest discussion of Laschet's strengths and weaknesses.

Many support the CDU chief because they associate a compass with him, something they miss at Söder.

Karin Prien, Minister of Education in Schleswig-Holstein, for example.

She emphasizes that one must now have the courage and make a decision.

Günter Krings, chairman of the NRW regional group, is also in favor of Laschet.

Everyone voted for Laschet at the party congress in the knowledge that he also wanted to become a candidate for chancellor.

"For me, Laschet is the better," says party vice Silvia Breher.

It is above all the liberal Christian Democrats who fear that Söder could turn the Union into a populist reservoir, into a completely different party.

Tobias Hans, for example, the Prime Minister of Saarland.

He rejects a vote of the board of directors.

"We have the best chances with Markus Söder," says Hans.

He would rather have a chancellor from the CSU than one from the Greens.

In plain language this means: Armin, with you we end up in the opposition.

Carsten Linnemann, the head of the SME Union, holds against it.

He doesn't want a vote either.

But he strengthens Laschet's back.

In Munich they keep a close eye on the board meeting.

Things are not going well for Laschet.

It shouldn't be about what is good for the shepherd, but for the herd, says Henning Otte from Lower Saxony to Laschet.

After several hours it is clear: the majority of the committee may be inclined to Laschet, be it out of fear of damaging it or out of friendship, but the resistance is great.

Much stronger than a week ago.

Söder's plan to seduce the CDU even seems to work right into the party leadership.

Laschet finally tries a rescue plan. Yes, he says, one could think about a district chairperson conference to put the decision on a broader basis. But only after a vote for him - not before. Laschet's plans leak out. They circulate in parliamentary groups and regional associations. Integrate the base - but make a decision beforehand? Disbelief spreads. "There are gamblers at work," says a CDU member of the Bundestag in a television interview.

It is now slowly towards midnight.

And anger grows even in the switchboard itself.

How should voting be done at all?

Which technology, which procedure?

And who can vote?

Only the elected federal board members - or also the guests, i.e. many state chairmen and prime ministers?

Laschet, who wanted clarity, now has to grapple with debates on the rules of procedure.

The big question: is Söder giving in now?

Nothing is prepared, nothing is clear.

When you are finally ready to take a digital vote, there is a problem with the access e-mails to the eligible voters.

“Everything's going wrong,” shouts Wolfgang Schäuble, the Bundestag President who has been supporting Laschet for days.

He was "very worried" whether the debate would end with the decision.

"What we do does not meet the expectations that many have." There are now many that have to be collected.

Then finally the decision.

What does that mean for the K question?

In any case, Söder should not understand the result as a clear vote against himself.

Is he giving in now?

If Söder does not accept the vote of the CDU federal executive committee, the decision on the Union candidate for chancellor could in the end be made in the parliamentary group, which meets on Tuesday afternoon.

Söder is expected to have a majority among the members of the CDU and CSU.

It's getting tight for Laschet.

And that's not the only problem.

Immediately after the board meeting, some people get queasy.

Apparently there was no invitation to the round in accordance with the statutes.

Actually, there was no quorum at all.

Chancellor dispute decided? CDU board votes in chaos debate for Laschet - how does Söder react?