The fight for the chancellor has been decided: Markus Söder is leaving. But that with a remarkable staging including delicate nuances. An analysis. 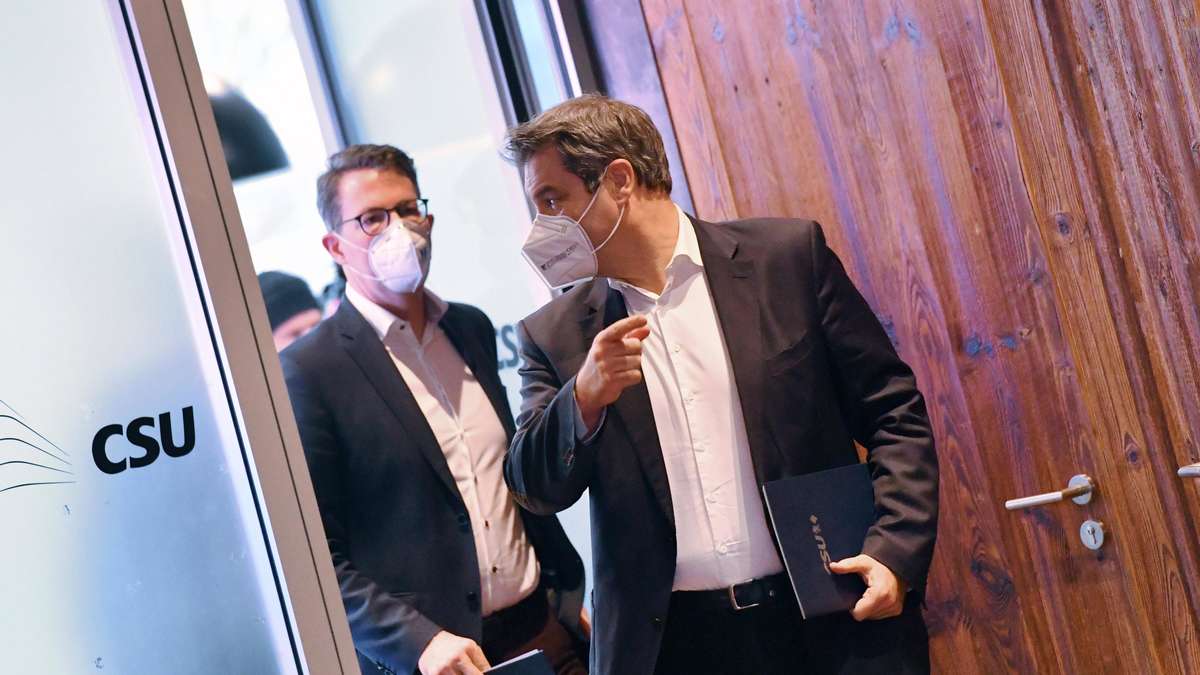 The fight for the chancellor has been decided: Markus Söder is leaving.

But that with a remarkable staging including delicate nuances.

Munich / Düsseldorf - The political word of the week - it might be “offer”. On Monday, Annalena Baerbock described her candidacy for Chancellor for the Greens, which is virtually immaculate from government experience, as an "offer" to the voters. And Markus Söder spoke again on Tuesday lunchtime about one of the Chancellor's "offers" made to the CDU. The difference: Söder's offer has to be rejected by the sister party. The voters will vote on von Baerbock in September.

If you listen carefully to Söder and his General Secretary Markus Blume the day after the turbulent Chancellor vote by the CDU board, you can learn a lot about the CSU's communication strategy.

And possibly also find an exit plan that was thought to have been rejected.

But above all: Hardly disguised criticism of Armin Laschet.

And a kind of preventive declaration of innocence for a possible bankruptcy.

There could also be an indirect receipt for this in the Bundestag election.

Chancellor decision: Söder leaves after a “self-destructive” week - and with a remarkable CSU staging

Before that, Söder drove the Union into a very turbulent - some say: "self-destructive" - ​​week, practically at the last minute. For months, the CSU boss had emphasized that his place was in Bavaria. In mid-April, he threw his hat into the ring, in the middle of the dispute over a nationwide Corona emergency brake. Söder indirectly called the quick opinion for Laschet in the CDU presidium a "back room" decision. This was followed by a dramatic parliamentary group meeting, days of tough struggle and, last but not least, expressions of doubt to Laschet from many parts of the CDU.

Söder and Blume bring a very specific reading to the people on Tuesday.

Even if journalists' questions are not allowed, the two CSU top politicians answer many conceivable points of criticism practically preventively.

And possibly position their party for a time after Laschet.

Söder's Chancellor messages: Fair CSU, “Candidate of Hearts” - and now innocent if the election is defeated

No "filthy", but fairness:

"Decency and style" are the basic principles of action, Söder explains on Tuesday in the CSU headquarters - and insists on the well-known CSU interpretation of the events: The debates, which are sometimes embarrassing for Laschet, are only legitimate Search for an opinion, it was said before. Even if not only experts like the long-time ARD journalist Ulrich Deppendorf saw a "stir up" for the CDU revolt against Laschet in the procedure. “We don't want a split,” explains Söder. A rift by the CDU had recently been attested, for example, based on controversial attitudes in the executive board, among the country leaders and in the parliamentary group.

Söder as the candidate of the hearts - failure in the “back room”:

But it seems even more striking how General Secretary Markus Blume assesses the events of the night. He shows: Söder would have been the better candidate from the point of view of the CSU. "Markus Söder was clearly the candidate of the heart," he said. Laschet's victory is due to someone else and - so it sounds - a more dismal circumstance: “But in democracy and especially in intra-party democracy, something else decides, namely in the end the majority. That is why we respect the result, and that is why Armin Laschet is the Union’s candidate for chancellor. ”Especially in the context of Söder’s“ back room ”remarks, this statement becomes explosive.

Söder would have been the better:

They made an "offer", explains Blume - one to his own supporters and the whole country. “It was a damn good deal,” he adds. The talk of the unobtrusive, friendly "offer" in itself already appears to be a remarkable twist of events: The application for a high office is rarely associated with altruism. The word “Chancellor's fight” also made the rounds recently. Söder himself thanks for the enormous encouragement for his application. “Especially with the young, with the modern, with those who were looking for the future”, he had received “outstanding support” in the CDU. The conceivable reverse conclusion: Laschet is a candidate for the Go on. And: Söder remains the man for the "future".

The CDU is now to blame:

from the statements: the CSU was ready to sacrifice itself, the CDU refused. Söder had already rowed in this direction the day before when he handed responsibility for the decision to the sister party. In the event of a sovereign election victory for the Union, this attribution, which has been emphasized several times, could quickly be forgotten. In the event of a defeat, it represents a communication option for the CSU. At least a hook in the thinking of the voters: they wanted, the CDU had insisted on Laschet. It is possible that Söder will position himself as a longing candidate for 2025 - in any case, the Christian Socials could demonstratively wash their hands in innocence. After all, there was no shortage of reminders about bad polls.

Laschet now under pressure: CSU prepares for all cases - but there is a blemish

A “defeat as a winner” seemed to be the declared aim of Söder and Blum.

Politically not unusual behavior - but in the struggle with the sister party in the federal election campaign it is still risky.

But even the voters - who felt like Munich were proclaiming a loser - should spurn Laschet and the Union at the ballot boxes: The CSU would have built ahead.

Laschet himself played emphatically fair on Tuesday. Also in the nuances: There were “other opinions”, the newly elected Chancellor candidate admitted, thanked Söder several times and only tried to legitimize the CDU board as the body that represents the positions of the entire CDU. "No" was Laschet's brief answer to the question of whether there had been any concessions to Söder - and whether there had been any damage in the quasi-public opinion battle that Söder had called for a week ago. Whether it really is like that: The general election will show. After all, only in about five months.

In the end, however, the apparently finely orchestrated appearance of Söder also allowed unfavorable interpretations. The talk of the "candidate of hearts" is borrowed from football: "Champion of hearts" was once Schalke 04, which in 2001 lost the championship trophy to Bayern Munich in the last second of the last day of the game, despite a narrow and turbulent victory against SpVgg Unterhaching. The club received plenty of sympathy for this. To this day, however, not a title as German champion. The Revierklub currently seems to be relegated to the second class. ( 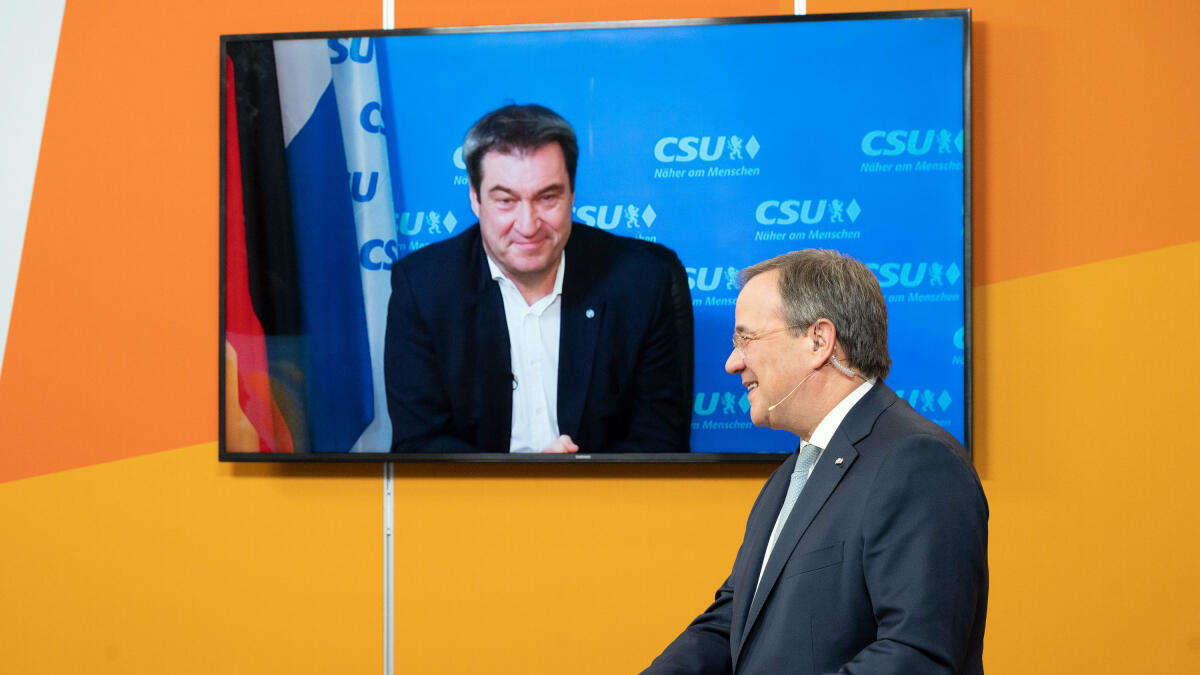 Tackling together with humor: Laschet and Söder present themselves as a union duo - soon to be chairman and chancellor?

As a man of the "future", Söder makes way - and sends Laschet poison arrows: "Something else decides"