The power struggle over the K question has been resolved. It remains to be seen whether all fronts are cleared up. Now Markus Söder comes up with a presumed reference to Armin Laschet's college days. The power struggle over the K question has been resolved.

It remains to be seen whether all fronts are cleared up.

Aachen - "The die has been cast: Armin Laschet is the Union's candidate for chancellor." With these words, CSU boss Markus Söder began his Twitter statement on Tuesday (April 20) on the decisive question for chancellor in the Union.

In Armin Laschet, the CDU federal executive board ultimately spoke out in favor of his party leader.

For the challenger of the Bavarian sister party, apparently completely fine, as can be seen in the next sentence of the article.

“We will support him with full strength and unity.

Chancellor question of the Union clarified: CDU and CSU in search of unity

The words that Söder chose both on social media and at his press conference are intended to propagate unity. The Bavarian Prime Minister is not alone in this. Many CDU MPs, who openly spoke out in favor of Söder as candidate for chancellor, now affirm that they are behind Laschet with the same vigor and drive. At the same time, Söder is praised as the “candidate of the heart” (CSU General Secretary Markus Blume).

Ultimately, both the CDU and the CSU are interested in downplaying the power struggle within the Union.

So that it does not have a negative impact on the Bundestag election.

The coming weeks and months will show whether this will succeed.

Teasing or "filthy" as Laschet last called the poison arrows from Bavaria in reference to the dispute between Söder and Horst Seehofer should therefore be avoided.

However, if you take a closer look at Markus Söder's quote, questions arise.

“The die has been cast,” writes the Franconian. What does Söder mean by that? Does it just refer to the Latin exclamation "

, which describes an event that can no longer be influenced? Possibly, Söder is a clever mind, graduated from high school with 1.3. Or is there more to it? Because the terms “cube” and “Armin Laschet” came into contact with each other in the past, this reference is also conceivable. The North Rhine-Westphalian Prime Minister was once confronted with the charge of "rolling notes".

Laschet worked from 1999 to 2015 at the Rheinisch-Westfälische Technische Hochschule Aachen (RWTH Aachen University for short), where he lectured in political science.

At the same time, he was the CDU regional head of North Rhine-Westphalia and was valued as such.

In the summer of 2014, the law graduate led the block seminar “Europe in Berlin Politics”, at the end of which the students had to take an exam.

Laschet's problem: the examination documents "got lost in the mail", as he announced at the time.

Armin Laschet was involved in a banknote affair in 2015.

Armin Laschet: Grades affair in Aachen - "people were graded who did not take the exam"

Laschet's faux pas also came to the fore because he apparently graded at random, as the chairman of the General Student Committee (Asta), Raphael Kiesel, told

: “The grading of his Berlin seminar took an incredibly long time. After Laschet had even been promised an extension of the deadline, it turned out that the exams had probably been lost. He then reconstructed the notes on the basis of notes, as he said. However, seminar participants who did not take the exam were graded. And not only that: Some of their grades were even better than those of the real co-writers. "

Laschet defended his "reconstruction" of the grades at the time and declared that he had acted in consultation with the university.

The SPD in North Rhine-Westphalia saw it completely differently in the person of the then parliamentary group leader Norbert Römer: “If a teacher behaved like this, disciplinary action would have to be taken against him.

If someone like him wants to compete here to become Prime Minister, then he has to ensure that there is no doubt about his personal reliability or his seriousness. "Laschet inherited Hannelore Kraft (SPD) in 2017 as head of government of North Rhine-Westphalia.

Ultimately, Laschet apologized and showed "full understanding of the anger that had arisen among individual students." The native of Aachen gave up teaching at the university, but was given the nickname "Würfel-Armin" because of the odd grades awarded.

There was also talk of “note cubes”.

It remains unclear whether Markus Söder wanted to refer to it.

It would of course not be the only small tip after Laschet's candidate for Chancellor.

Söder explicitly thanked "the young, the modern, those who were looking for the future" and "courageous MPs who, contrary to normal party solidarity, have openly said what they appreciate." Laschet, who, according to Söder, stands for a "different generation" anyway. 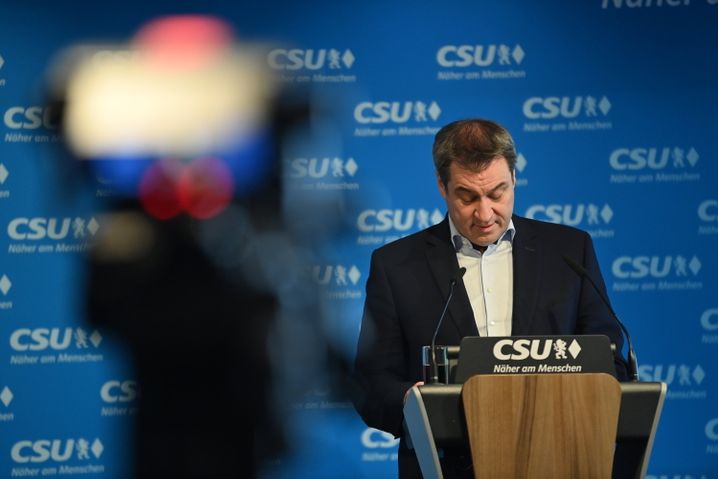 Next survey slipping for Laschet: Söder has an advantage - but the lead could be deceiving

Next survey slipping for Laschet: Söder has an advantage - but the lead could be deceiving