India is in the middle of a vicious corona wave. Some New Delhi hospitals are running out of oxygen. Germany plans strict travel restrictions.

India is in the middle of a vicious corona wave.

Some New Delhi hospitals are running out of oxygen.

So now: The federal government wants to declare India as a virus variant area, the

For people from India there is then a strict entry restriction into Germany.

The limit may then only be exceeded in exceptional cases.

For example, Germans and foreigners who stay in Germany permanently are still allowed to enter.

However, you must show a negative test beforehand and after arriving in quarantine.

The quarantine lasts 14 days after arrival - it cannot be shortened.

In particular, some groups of people are not even allowed to travel by plane.

Flights are then usually canceled in the country.

India is currently being hit hard by a double mutation.

The variant B.1.617 is now under observation by the WHO.

In Germany, India's declaration of the virus variant area was initially not made.

"In order not to endanger our vaccination campaign, travel to India must be significantly restricted," he told the newspapers of the

The number of corona cases is exploding in India.

Almost 315,000 new corona cases have been recorded in India within 24 hours.

There have never been so many new infections with the coronavirus in one day in any country in the world.

More than 2000 people died, as the Ministry of Health announced in New Delhi on Thursday.

Many hospitals are at the limit.

There is a lack of beds and oxygen.

India is currently struggling with a "double mutation" called Corona mutation B.1.617.

In Germany, this corona mutation * has hardly played a role so far, but according to experts that could change.

India: after the Corona miracle a disaster follows?

The virus in India was defeated, it said.

Some areas have even achieved herd immunity.

The number of corona cases * was low in January and February.

In a country of 1.3 billion people, almost too good to be true, as the British

It was probably much less tested.

After the peak of the first wave, India quickly returned to normal.

A mistake, as it turns out now.

Hundreds of thousands made the pilgrimage to the Ganges in mid-April.

A ritual bath in the holy water of the Ganges was more important than Corona.

At the end of March there was a crowd at the Holi Festival in India, as well as political mass events.

The coronavirus took its chance.

"This second corona wave came like a storm," India's Prime Minister Narendra Modi said in a speech to the nation on Tuesday.

Just a few weeks ago the situation was "under control", but now India is "again in a great struggle".

Experts also blame the government's reluctance to fight the virus for the situation.

Modi himself held an election campaign event in Kolkata in early March with hundreds of thousands of participants.

Corona in India - oxygen bottles are running out

Oxygen cylinders are traded at exorbitant prices on the black market.

Deliveries planned for hospitals often do not arrive.

On Wednesday evening, the New Delhi Supreme Court ordered the government to ensure the safety of oxygen transports from the plants to the clinics.

India is hit by a devastating corona wave.

The number of corona cases is exploding.

India is currently a corona hotspot.

The situation seems out of control.

Many countries have imposed entry bans on travelers leaving the country.

The USA issued a travel warning even for people who had already been vaccinated against the coronavirus.

India is on the list of corona risk areas.

The Foreign Office in Berlin has asked Germans who are in India and have not been vaccinated against Corona to “consider a temporary return to Germany until the medical care situation has stabilized”.

However: Even the current vaccines are not supposed to fight the B.1.617 mutant. 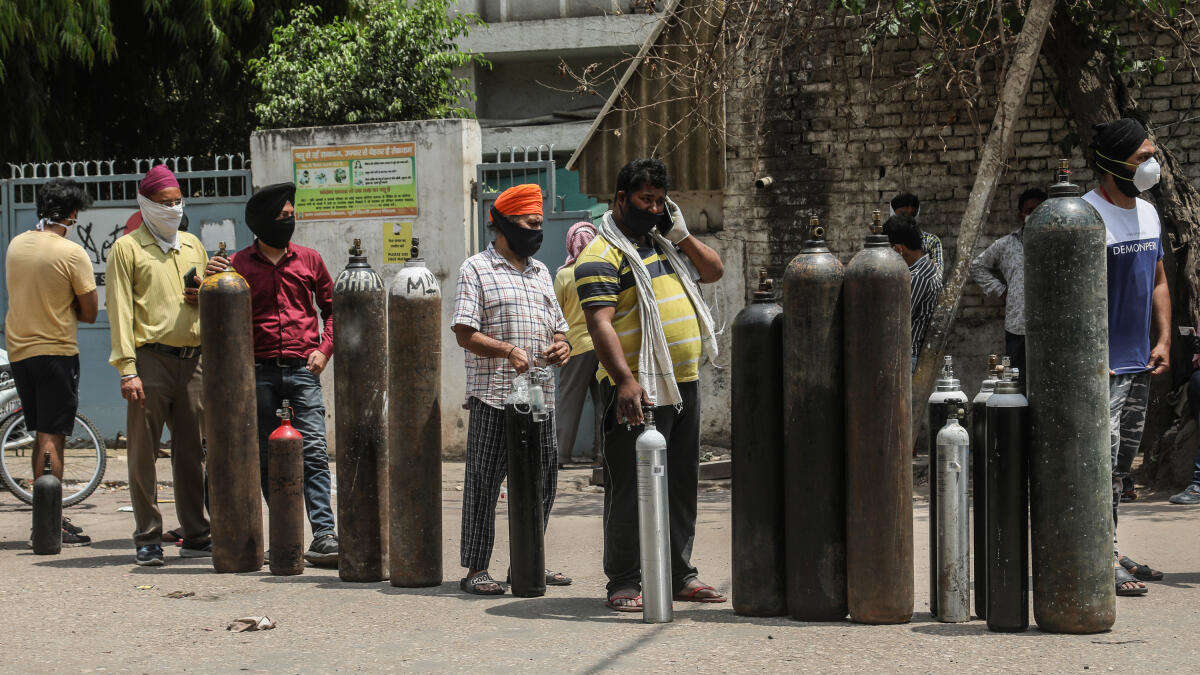 Corona vaccination strategy: criticism of Spahn increases and becomes a test - he defends himself