Sise Garden celebrates its 100th anniversary this year, and the two-year-old "Fortune Palace" is officially opened today (26th) on the occasion of the "Festival of the God of Wealth". In addition to doubling the area, the palace also uses a glass house design to withstand the typhoon weather in Hong Kong. 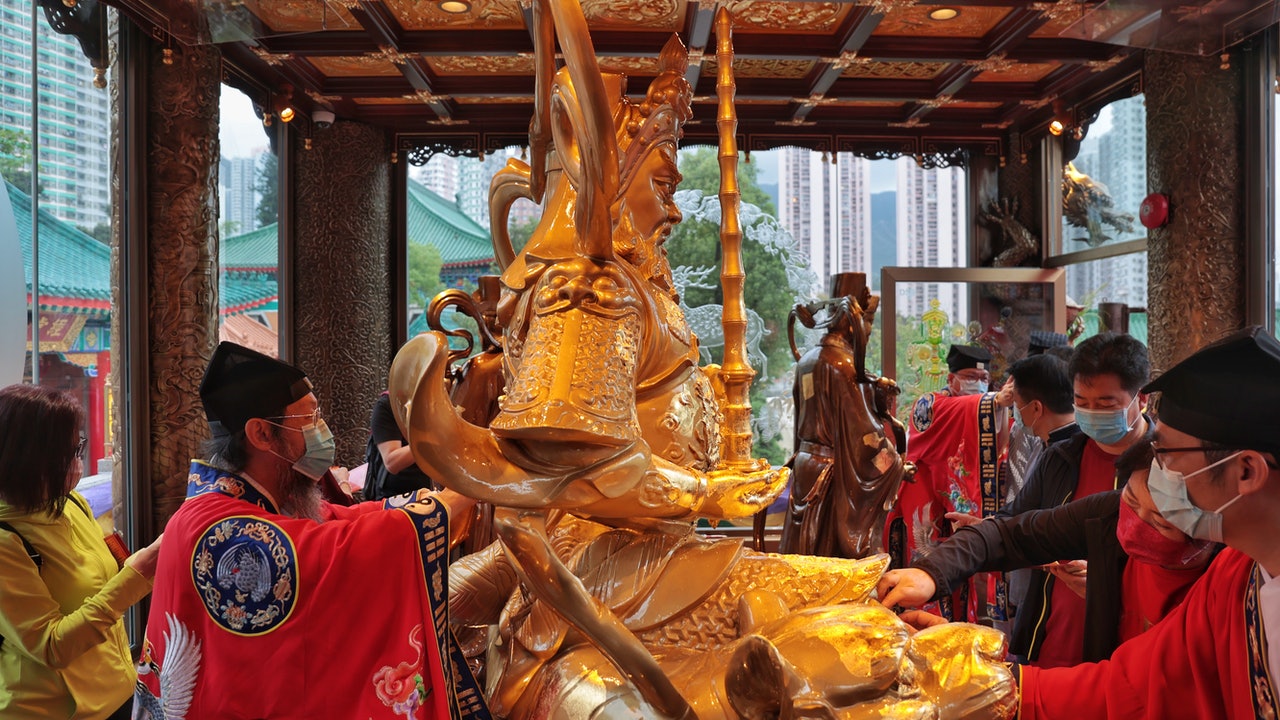 Sise Garden celebrates its 100th anniversary this year, and the two-year-old "Fortune Palace" is officially opened today (26th) on the occasion of the "Festival of the God of Wealth".

In addition to doubling the area, the palace also uses a glass house design, which can withstand typhoon weather in Hong Kong, and also implies that wealth can extend in all directions. Another striking feature is the donation of 100 yuan to the "Five Way God of Wealth". Pray for gold leaf.

Chief Supervisor Li Yaohui (Yijue) said that the purpose of putting gold foil on the gods is to show respect and sincerity.

A large number of faithful people lined up to enter the stadium. The champion trainer Yao Benhui, who is actively preparing for the battle, also came to worship with his friends, praying for a smooth wind and a safe Hong Kong. There are also faithful believers who believe that sticking gold foil is a kind of good intention, and praying for wealth and prosperity.

The first 10,000 people who receive gold leaf and believers will receive a gold card from the God of Wealth.

In addition to the newly cast statue of Marshal Zhao Gongming, four deities representing the east, south, west, and north, "Zhaobao Tianzun", "Nazhen Tianzun", "Fortune Envoy" and "Lishi Immortal Official" are added. The gods are collectively known as the "Five-Road God of Wealth." The "Fortune Palace" is the only temple in the shrine where the faithful can personally "attach the golden body" to the god.

If you donate 100 yuan to a charitable person, you can claim a piece of "Pure Gold Gold Foil", and you will also receive a "Lucky Glazed Ingot" blessed by the master of Seiseyuan Gaogong; the first 10,000 charitable people who request gold foil will get extra Receive a "Golden Card of Wealth" that has been issued.

The gold leaf is made of pure gold. Chief Li Yaohui (Yi Jue) of the Wong Tai Sin Temple Supervisory House at Sik Sik Yuen laughed and said, "It's not ordinary gold paper. Welcome everyone to carry it for testing." (Photo by Li Zetong)

Director Li Yaohui (Yi Jue) of the Wong Tai Sin Temple Supervisory House in Sise Sik Yuen said that the original God of Wealth Hall was relatively narrow, and seeing the increase in worshippers, the expansion of the God of Wealth Palace was in response to the appeal. He also mentioned that Zhao Gongming was not canonized as the God of Wealth. It was originally the "Plague God" who was responsible for driving away the plague and avoiding the epidemic. At the time when the epidemic is covering Hong Kong, the economy is sluggish and the unemployment rate is high, the opening of the Palace of Wealth is just to pray for Hong Kong. "I believe the number of epidemics will drop again soon."

Li Yaohui pointed out that Taoism has always pursued the concept of environmental protection, so he decided to refer to the method of "sticking gold" in Buddhist temples in Thailand. "There was this concept in ancient China." He also said that "sticking gold leaf" means paying homage to the gods, except for statues that have been consecrated. Outside the head, the believer can freely choose the position, "You can stick the tiger's teeth, and you can." He also said that even if you don't make a donation, you can go to the God of Wealth Palace to worship the incense, but you need to "stick gold leaf" to enter the palace. toll.

Today is March 15 of the lunar calendar. It coincides with the birthday of Marshal Zhao from the Black Tiger Xuan Tan. A large number of faithful people lined up to enter the venue. A long queue appeared outside the God of Wealth Palace. The citizen Fang made a special trip to worship with his family. In addition to praying for his own wealth and prosperity, I also wish to wish the whole Hong Kong peace and safety, "There has been a lot of negative energy in the past two years, and I hope it can be driven away."

The champion trainer Yao Benhui was also there with his friends, and he made a special trip to select the tiger next to the Buddha statue to put gold leaf on it.

Yao Benhui made a special trip to the scene

The champion trainer Yao Benhui was also there with his friends. He said that he had been paying homage to Wong Tai Sin for many years. "Before entering the line, he had already worshipped Jinara, half (the reason) was based on personal beliefs, and the other half was due to the customs of the industry." He continued, praying for the wind. I also hope to help my career.

Yao Benhui continued to point out that he made a special trip to select the tiger next to the Buddha statue and put it on gold leaf. "There is a kingly style." When asked if he likes a horse, he thought for a while and smiled, "I can't talk about it."

New Year of the Ox｜Huang Xia Hui spent tens of thousands of dollars pretending to be a bull devil and appearing in Wong Tai Sin Temple: Killing the epidemic

Year of the Ox│Deng Bingqiang went to Wong Tai Sin Temple to condolences to fellow citizens and asked for a group photo: Brother I want to take a photo 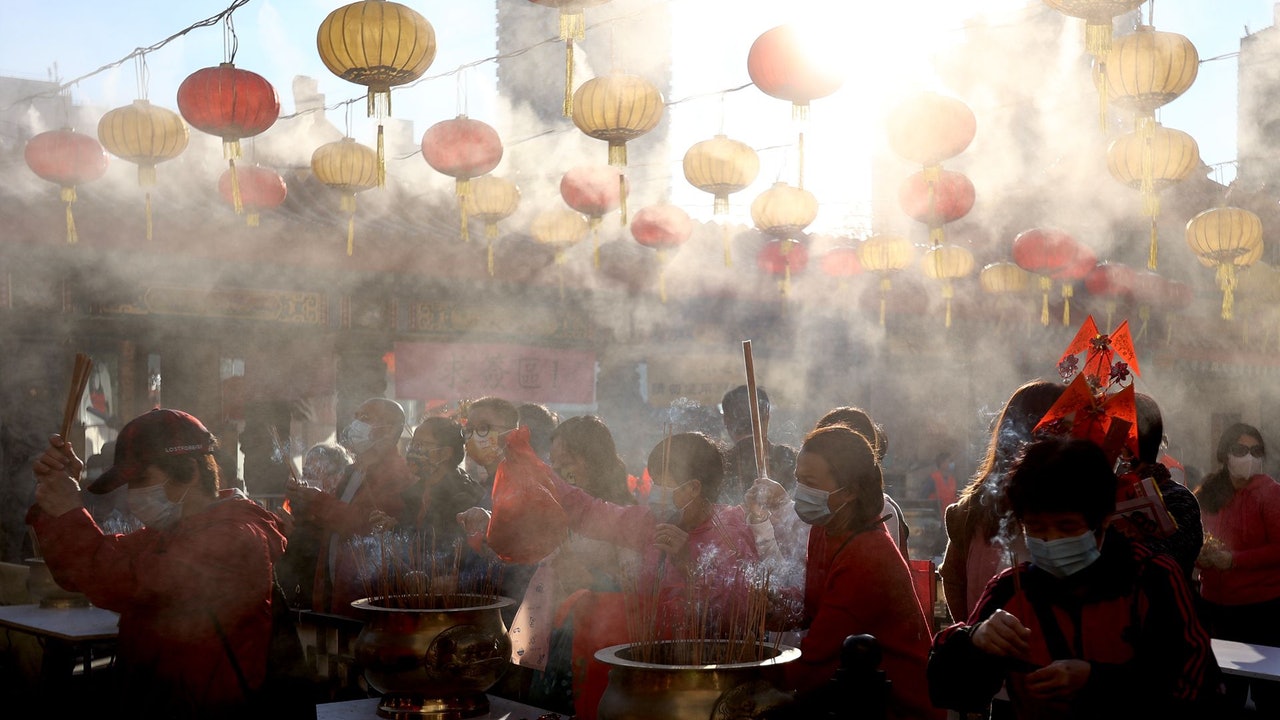 New Year of the Ox. Live | Victoria Garden Flower Market sells orchids at reserve price in the last 15 minutes: citizens are so economical

New Year of the Ox. Live | Wong Tai Sin Temple will soon be over, and the major Lunar New Year Fairs will be closed soon

New Year of the Ox. Live | Half an hour after midnight

New Year of the Ox | Half an hour after midnight