Officer Rami Alwan was one of many who assisted the victims in the disaster. In the great confusion he noticed Avigdor and his son being pushed, rescued them and saved their lives. But another son, her 13-year-old friend, perished. Tonight, Sergeant Alwan went with his policeman father to an exciting meeting in Bnei Brak: "Nothing prepares you for such a scenario"

Avigdor took his two sons to Meron, and returned with one.

He now meets with his rescuer: "owe you life"

Officer Rami Alwan was one of many who assisted the victims in the disaster.

In the great confusion he noticed Avigdor and his son being pushed, rescued them and saved their lives.

But another son, her 13-year-old friend, perished.

Tonight, Sergeant Alwan went with his policeman father to an exciting meeting in Bnei Brak: "Nothing prepares you for such a scenario"

Hundreds of policemen were present on Mount Meron on the night of the disaster at the Rashbi celebration, and acted in an attempt to rescue as many of the injured as possible. One of them was Sergeant Rami Elian, who saved the lives of Avigdor Hayut and his ten-year-old son Shmuel. But another son of the family, her 13-year-old friend, was crushed to death among the crowd. Today, Aliyan went to an exciting meeting with a family of animals in Bnei Brak, during the swearing-in of her friends.

Aliyan, a Druze policeman who arrived with his father who is also a policeman, said at the meeting: "All the scenarios that the police are preparing you for, there is no single scenario that can describe what was there. Mentally you just can not come prepared."

Avigdor described the rescue moments: "I was on the floor with a mass of hundreds of people above us. A friend and another son were within a meter of us, ahead. So I saw Remy shouting at me 'Give me your hands and I will pull you'. At that moment I told him Let him leave me and go get the boy.I saw Rami vomiting and crying and trying to do everything he could until out of the corner of my eye I noticed she was pulling out my son. "

"Remy is an example symbol," the father continued.

"He did not ask me which party I belong to or which denomination I belong to, whether I am Jewish or Muslim. We are able to live together, it is in our hands."

He turned to the officer and said Jeremy, you saved my child, for me saving the world. "

The boy asks saved Rami the turn exciting policeman and said:" I owe you my life, I have no words to thank you. "Remy stood up to hug him And answered him, "You owe me nothing."

Deri in debate but in the Knesset plenum: The site was not addressed due to legal issues

The father concluded by saying, "I heard various allegations about the police. I was at the end of the ramp. I did not enter any fences. The police forces acted as they could. Guilty one is in heaven. It is unnecessary. To draw conclusions and see what to do and look for a victim to hang. "There are 45 victims. We will be content with that." 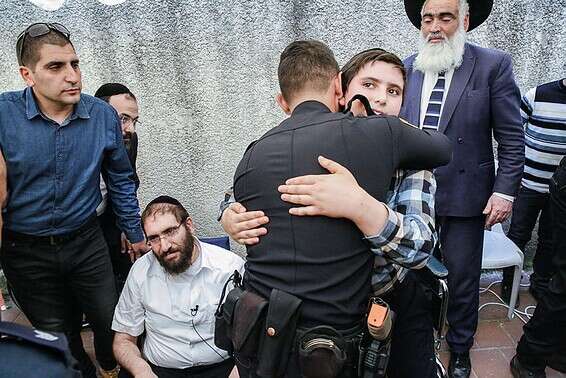 "You saved the whole world for me": the exciting encounter between the father and the medic who saved his son in Meron | Israel today

Before it became known that his sons had perished in Meron - the father shouted at the bodies: "I want you to live" - ​​Walla! news

Alshikh warnings of defects in Meron: "The police are not solely responsible for the safety of the celebrants" - Walla! news

Netanyahu: Bennett's goal was to waste time and reach a dangerous government with the left - Walla! news

A father was arrested on suspicion of kidnapping his infant son from the preterm birth in Ichilov and transferred him to Tel Hashomer - Walla! news