Massive easing for corona-vaccinated people at the end of the week: Spahn names the schedule - Söder rushes forward

Several federal states have already relaxed the corona rules for vaccinated people before a nationwide requirement. It should come now. The news ticker. Several federal states have already relaxed the corona rules for vaccinated people before a nationwide requirement.

It should come now.

The new federal ordinance could take effect this week to relax people who have been vaccinated against corona.

In counties with values ​​below that, the opening of culture, gastronomy and hotels must be possible again, says Dobrindt.

"That is the prerequisite for the CSU to agree."

Söder is already pushing ahead in Bavaria: People who have been vaccinated twice and Genesis will no longer have to adhere to contact restrictions and curfews, he explained at a press conference in Munich.

These rules should apply as early as May 6th - "earlier than the federal government".

Otherwise, the curfew remains as before.

From June 7th, the "federal alleviations are to be included."

Corona vaccinated people: Lauterbach warns of gastrostomies and hotels being opened too quickly

the corona pandemic, the SPD health expert Karl Lauterbach warned against opening restaurants and hotels too quickly for vaccinated people. It is true that it is "a necessary and good decision" to withdraw the restrictions on fundamental rights for vaccinated people. “What is not possible is that shops or restaurants are only opened to those who have been vaccinated. That would lead to tensions that could hardly be borne, ”said Lauterbach on Tuesday on Deutschlandfunk.

A comprehensive control of the openings is difficult and it is now important to ensure the proven success in combating the pandemic.

"We are still very far from herd immunity."

.: 28.2 percent of Germans have now received at least one corona vaccination.

Politicians are currently emphasizing that the federal government's vaccination campaign is on the right track.

Nevertheless, the vaccination strategy has to be expanded - for example by breaking the prioritization.

The FDP is now calling for vaccinations to be carried out in places where vaccination doses have not yet been used.

"Israel shows that a rapid vaccination campaign is the key to combating the pandemic is," said the FDP Bundestag member Christine Aschenberg-Dugnus against

“Unfortunately, the federal government stumbled into the start of the vaccination and is still not really accelerating.

We now have to do everything we can to vaccinate like the world champions. "

In order for this to succeed, vaccination should be expanded further.

“From summer, vaccinations should also be possible in supermarkets, stadiums and parking lots.

That way we all get our freedom back quickly, ”says Aschenberg-Dugnus.

In addition, offers in the amusement park or natural history museum are an option, according to a position paper of the party.

In other countries such as the USA or Israel you can get vaccinated against Covid-19 while shopping.

The federal government wants to lift some restrictions on vaccinated people as soon as possible.

Minister Jens Spahn announced on Monday that there could be a regulation this week (see previous update).

In the meantime, more concrete contents of the plans of the Corona Cabinet have also leaked to the public.

The previous restriction on meetings "does not apply to a private gathering in which only vaccinated or recovered people take part," says a current version of the draft regulation, from which the AFP news agency quotes.

Accordingly, the current exit restrictions should also be eliminated for vaccinated people.

At a private meeting in which people who have not been vaccinated or who have recovered also take part, someone with the appropriate protection is “not treated as another person”, it said. Vaccinated and convalescents will also be put on an equal footing with people who can show a negative test result. This should make shopping or going to the hairdresser easier. People who received their second vaccination at least two weeks ago are considered fully vaccinated. According to Spahn, the digital ID card should be used in future to prove vaccination *, but alternatively also the yellow vaccination pass or the form filled out by the vaccination centers.

However, the opposition's plans are still insufficient.

The opening of cultural and sports facilities for vaccinated and convalescent people is also possible in many areas.

"Above all, outdoor catering can be opened with protection concepts." Greens boss Robert Habeck said the federal government's draft was going in the right direction, but there were still some unanswered legal questions.

Left leader Janine Wissler spoke out in favor of equating vaccinated people with those who tested negative *.

In view of the still low vaccination rate, however, no major loosening and opening should be decided.

Restrictions on people who have already been vaccinated must be maintained in order to protect people, explains Spahn - the moment it becomes clear that there is little or no danger from vaccinated people, regulations could be removed.

Today's deliberations of the Corona Cabinet (see previous update) are now the starting point for talks with the Bundestag and Bundesrat, said Spahn.

Ideally, a decision could be made this week or next week at the latest.

It is now necessary to coordinate in advance.

Otherwise, there is a risk of a longer "ping-pong" game: the Bundestag, like the Bundesrat, could also propose changes.

Relaxation for vaccinated people in just a few days?

.: As early as next weekend, people who have been vaccinated and recovered from corona should enjoy more rights again

The leaders of the CDU / CSU and SPD faction groups agreed on Monday morning, the

Accordingly, there are no longer any contact restrictions for these groups of people.

They do not count in the current rules when an unvaccinated household meets with them.

Relaxation for corona vaccinated people: Söder positions himself clearly - "Basic rights are not a luxury good"

.: Bavaria's Prime Minister Markus Söder * (CSU) has announced an immediate implementation of the federal regulation on relief for vaccinated people.

“Fundamental rights are not a luxury good and not a gift,” they are the normal state, said Söder at a press conference on Monday.

That is why a federal decision will be implemented immediately - one does not want to wait for the Federal Council.

What would be new for Bavaria would then be that if there were contact restrictions, those who have been vaccinated twice and those who have recovered are not counted towards the maximum number of participants.

There will then also be easing of the exit restrictions.

Before the Corona summit with Merkel: Debate on easing for vaccinated people

Our first report from May 3rd

: Berlin - The corona vaccination campaign is picking up speed, hopes are high.

Is it possible to go to a restaurant soon, or one in a fancy pension?

In Saskia Esken's view, not.

Although contact restrictions or night-time exit restrictions should be lifted for these people, "because of this we will not open the restaurants and hotels to individual people," said the SPD co-federal chairwoman on Monday in the

Instead, Esken referred to the step-by-step plan of the federal emergency brake, in which opening steps are linked to the corresponding incidences: "We agreed that restaurants can open outside, but in cautious steps to see what happens." However, Esken emphasized: " Those who have recovered and who have been vaccinated should have all the rights that those who have just tested have. "

Her colleague Norbert Walter-Borjans was similarly reluctant to speak on “Bild live”.

The SPD politician said on Sunday: "Anyone who has the full vaccination must then no longer be subject to a curfew."

Part of "truth and honesty", however, is that it is not about openings for those who have been vaccinated.

You shouldn't create an “illusion” there.

The topic determines the start of the week, also in the ZDF's “Morgenmagazin”.

It was only a matter of weeks before everyone in Germany was offered a vaccination, said the CDU politician.

The basic rights are given to everyone, the state must justify a restriction, said Frei.

If this justification no longer applies, restrictions would have to be withdrawn.

"At the moment we are in the situation that has now been recognized that there is no risk of infection from the vaccinated and recovered," said Steffen Augsberg, also in the "Morgenmagazin", a constitutional lawyer and member of the ethics council.

This means that the main reason for the restrictions no longer applies - even if only eight percent of the population have been vaccinated so far: "You

The "vaccine envy" must be pushed back through good communication - that is the task of politics.

It is unfortunate that there has long been talk of privileges instead of basic rights.

Health Minister Spahn (archive photo) is optimistic with Chancellor Merkel before the “vaccination summit” on May 3.

The federal government wants to bring a regulation in motion this week that provides for relaxation for vaccinated people.

The Corona cabinet will discuss a first draft on those who have been vaccinated, recovered and those tested on a daily basis on Monday, said Spahn.

If this could be coordinated quickly, the new rules could certainly be implemented this week or in the next one or two weeks.

Finance Minister Scholz (archive picture) like Chancellor Merkel with mouth and nose protection - which in his opinion should still be worn on corona vaccinated people.

The mask requirement will remain, however, said Finance Minister Olaf Scholz (SPD) on the subject.

In addition, the SPD candidate for Chancellor gave little hope for major events such as the Munich Oktoberfest: "Large crowds in a confined space, we should first hold back."

According to the Robert Koch Institute (RKI) *, less than eight percent of German citizens are currently fully vaccinated. Corona easing for all vaccinated people in Germany: "I will submit a prescription immediately" 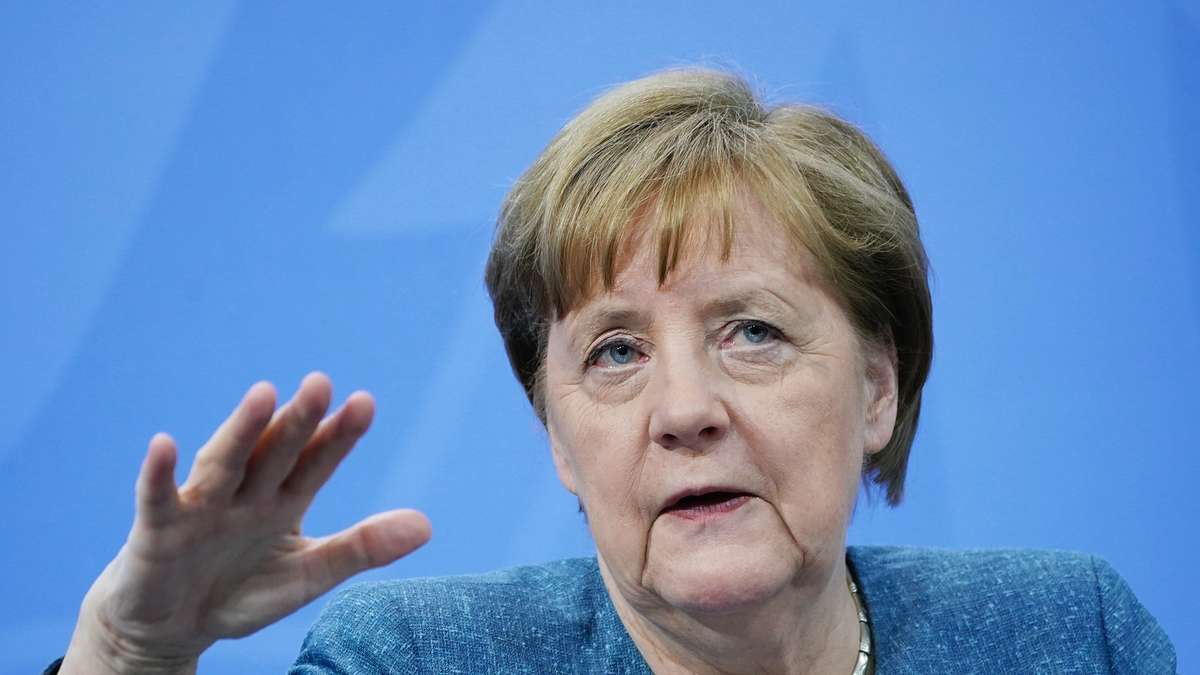