Green China course with more rigor: Baerbock calls for vigilance - "Must not be naive" Five months before the general election, the Greens are sharpening their China profile.

Berlin / Munich - you are not yet in the government - but practically every survey will see you there from September, whether as number two or number one: the Greens. The Greens' positions are known on many political issues. In terms of foreign policy, however, Chancellor candidate Annalena Baerbock still has to sharpen her public profile - and she is currently doing this in connection with China. Recently she called for a mixture of "dialogue and hardship". And on Monday evening, in an interview with the Federal Academy for Security Policy, she pleaded for a stronger common position of the EU vis-à-vis the People's Republic.

"We must not be naive about China," said Baerbock.

China poses a risk, especially with regard to economic policy measures.

The country is trying to create economic dependencies, for example by investing in infrastructure.

"That is the crucial point where we as Europeans have to be very vigilant," warned Baerbock - a hint to China's infrastructure program of the New Silk Road, which is expanding to more and more projects in Europe.

Therefore, Europe must "protect itself" with a view to direct investments in local infrastructure, said the Greens leader.

In Baerbock's view, products from forced labor in Xinjiang, for example, also have no place in the EU, as she recently emphasized.

At the same time, the EU has a responsibility towards other countries, emphasized Baerbock. In a "fair competition with fair trade agreements" Europe must protect other states from being dependent on China. The dispute over the rescheduling of a Chinese loan to Montenegro for the construction of a motorway - a typical project of the New Silk Road - shows that this is not easy for Brussels. Montenegro cannot service the billion-euro loan taken out in 2014 - and wanted to ask the EU for support in refinancing a loan. But the EU Commission refused and only offered vaguely worded help.

A policy that only pursues interests and ignores values ​​would fall on the EU's feet, said Baerbock.

The Greens in Germany and Europe have stood for this approach for years.

Baerbock himself, like co-party leader Robert Habeck and the EU parliamentarian Reinhard Bütikofer, are among the critics of Chancellor Angela Merkel's China course, which is more geared towards economic development.

Bütikofer criticizes, among other things, the CAI investment agreement between the EU and China, pushed by Germany, which has to be ratified by the European Parliament.

Because of his criticism of the human rights situation in Xinjiang, he is one of those against whom Beijing recently imposed sanctions.

Noah Barkin from the Rhodium Group think tank recently spoke to several of their politicians in Brussels for a study for the German Marshall Fund's Asia program on the Greens' China policy - because the course of a future ruling party in Germany is of course also of interest to other countries. "All of the members I spoke to felt that Germany must be willing to make economic sacrifices in order to pursue a more robust, more common European strategy," Barkin wrote. Many have spoken out in favor of close cooperation with the new administration of President Joe Biden in the USA and other democratic allies vis-à-vis China.

The question of how closely Germany and Europe should work together with the USA on the China course is currently being discussed by everyone - including within the Greens. Green veteran Jürgen Trittin, who is a member of the Foreign Affairs Committee of the Bundestag, rarely criticizes China without giving the USA one, writes Barkin. Trittin sees the Chinese telecommunications supplier Huawei as a "hostage" in the US campaign to curb Chinese power.

Until the election, the Greens will have a fundamental debate on China - one of the reasons why Annalena Baerbock has to drive in her stakes. The candidate for chancellor does not want to completely ignore the economy. She emphasized that, with all due caution, the EU could not completely isolate itself from China. “It's much too big a market for that.” She also campaigned, as Angela Merkel does, for maintaining the dialogue: The human rights situation in China cannot be improved by stopping talking to one another.

Green China course with more rigor: Candidate Baerbock calls for vigilance - "must not be naive"

Green China course with more rigor: Baerbock calls for vigilance - "Must not be naive" 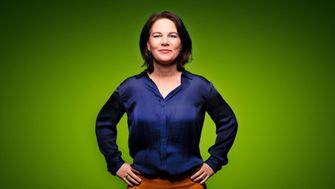