Most recently, the Union slipped into second place behind the Greens in polls, now it looks like an end to the decline. Chancellor candidate Armin Laschet is also slowly gaining support. 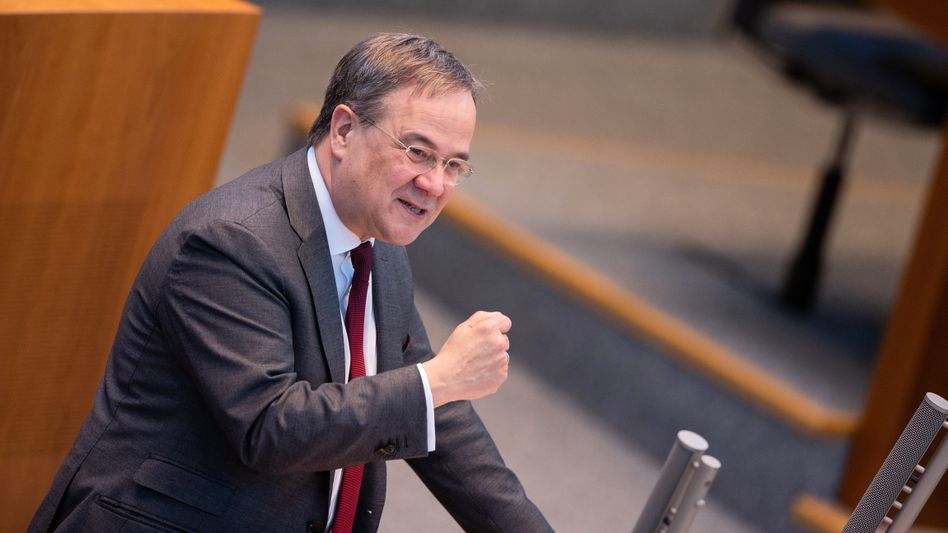 CDU Chancellor candidate Armin Laschet: Has the Union ended its descent in the polls?

There have been more fun times for the Union than in the past few weeks.

First the mask affair between the CDU and CSU took hold, then the power struggle for the candidacy for chancellor between CDU leader Armin Laschet and CSU leader Markus Söder cost further sympathy.

The sister parties were recently a long way from polling over 35 percent in the federal government as in spring 2020.

Last week the Union was only around 24 percent - and thus behind the Greens.

At least that has changed again for SPIEGEL, according to a representative survey by the opinion research institute Civey.

According to this, 27 percent of the electorate would vote for the Union parties if there were general elections on Sunday.

They currently come to 25 percent.

(Read the background to the Civey method here.)

With the other parties, on the other hand, hardly anything is happening: The SPD remains in the 15 percent low, even if Chancellor candidate Olaf Scholz still believes a significantly better result is possible.

Then the FDP follows with 11 percent.

The AfD remains in the single-digit range with 9 percent, the left currently stands at six percent.

Given the margin of error of 2.5 percentage points, it is too early to speak of a trend reversal in the duel between the Union and the Greens.

One thing is clear, however: the competition for the Chancellery has not been decided despite the Union's slip.

The appearances of the top staff are likely to become all the more important in the coming weeks.

In particular, Union Chancellor candidate Laschet has to convince if he wants to improve his bad poll results.

However, he shouldn't rage too much against the Greens.

Because, as a SPIEGEL survey from last week shows, not only do many Union voters want a black-green government alliance.

The Greens are currently so strong that no coalition would appear realistic without them.

The Union would also have to rely on Baerbock and Co.

Baerbock ahead in the direct election survey

In addition, Baerbock is further ahead in the direct candidate ranking.

29 percent of the respondents would vote if there was a direct election to the Chancellery.

Laschet improves from a weak eleven percent two weeks ago to 20 percent now.

In contrast, only 14 percent of those surveyed would vote Olaf Scholz directly.

This means that the social democrat slips down to third place in the ranking.

Laschet should be happy about the upward trend.

His direct election poll numbers were worrying immediately after his free choice for Union chancellor candidate.

Even in the group of Union supporters, only a quarter named Laschet as the preferred candidate in a direct election.

Now at least one or two people would vote for the CDU boss - apparently, more Union sympathizers have come to terms with the decision on the K question.

Compared to Baerbock in the Greens and Scholz in the SPD supporters, Laschet still has the weakest support in their own ranks.

So he will have to keep fighting, including for the support of the regular electorate. Polls: Union is fighting its way out of the polls - Baerbock has to accept losses